When 28mm Napoleonics is your thing, you cannot be content with a measly 6'x4' table. One requires vast battlefields! I've been debating what to do in this regard for a couple of years, and eventually made my decision.

I reviewed various options, including terrain modules, but eventually went with the traditional 'cloth' (though actually not 'cloth' as described below...) table cover. The reason for this is that it is very easy to transport to other venues if necessary (like the local wargames club and conventions), as well as being cheap and quick but still looking good if care is taken with other scenery.

I decided upon 'Mat-O-War' wargaming mats from Atenocitis Workshop. They are apparently made from the same sort of static grass you use for basing figures, set in a resin, so they match common figure basing types very well (e.g. see here). These mats are relatively cheap for what they are and very tough.

I've been using a single 6x4 foot mat for almost a year, and on the strength of this experiment I went ahead and purchased two more 6'x4' and one 8'x6' mat. They were delivered promptly just as the first one was. This will allow me to do a 20x6 foot table(!) or several smaller ones. The mats are also a bit larger than I require (10-20cm) and this extra material trimmed off will become terrain templates for forests and so on. I cut my first mat to 180cm by 120cm and they others will be adjusted too (though not by quite as much due to need for mat overlap on large tables). 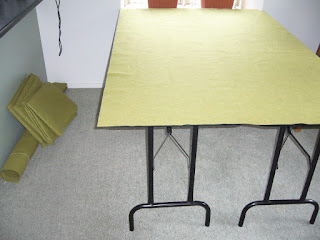 The material is initially quite stiff like cardboard, but from what I've read online it improves with age and use, as my first one has started to do. There's records online of people doing multiple washes with fabric softener to try and get them more pliable! My first one went through the wash and then dryer a couple of times with no apparent effect though. Maybe I needed to use fabric softener. Anyway the fact you can wash and iron and treat these mats with much punishment without damaging them is a point in their favour. Be aware though, that initially at least you would not be able to drape them over hills to make contours that way (or not small sharp contours anyway). However this same property also means the mat won't wrinkle up annoyingly during play as some other cloths tend to do!


Given their durability I think they would probably be great mats for a wargames club and the constant use would also help wear them in more quickly. For another review, see here, and for discussion on making them more pliable, see here!

These mats were delivered to New Zealand folded up, which meant some long time with the steam iron reducing the crease lines... I used the water spray function on the iron to dampen the mat, then placed a tea towel on top as is recommended, before ironing firmly. 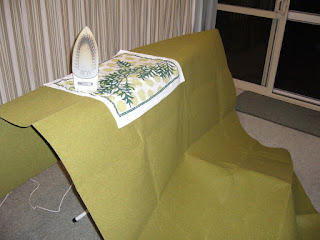 The next thing required is more trestle tables. These are from the Warehouse here in New Zealand and are exactly 180cm x 60cm which is very handy. I have two and have just bought another four, and the plan is to add another four at some point. Currently this means I can do a 12'x6' table, and a 20'x6' table if I get another four. 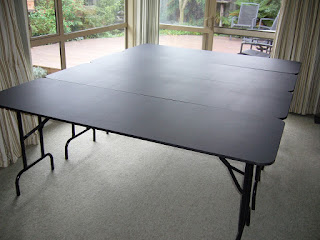 Still plenty of space in here, though the wife isn't as convinced! :)  As I noted in a post last year, I was planning on using the double garage for my mad Leipzig plans, but I see that with some gentle furniture rearrangement this lounge would also be pretty good and more convivial... :) 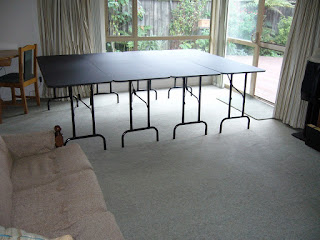 Email ThisBlogThis!Share to TwitterShare to FacebookShare to Pinterest
Labels: Terrain