Some allied infantry for the French. I've done them up as 'generic' Italian line infantry in white uniforms with green and red facings/collars etc.  I used the Victrix 1804-1812 set for these as this is the earlier long tailed uniform. 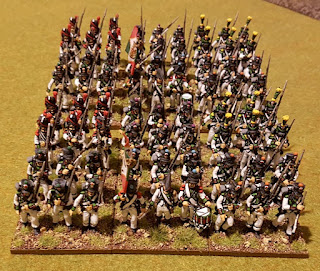 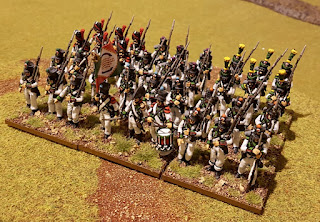 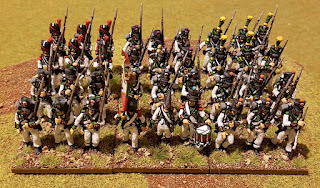 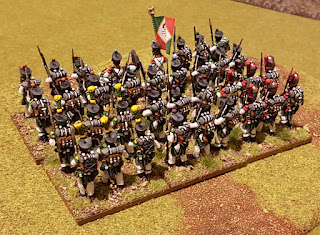 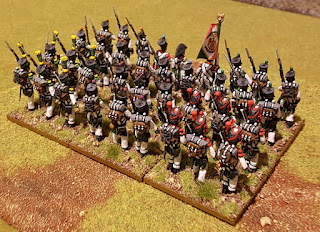 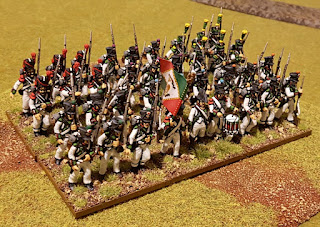 A close up look at the elite companies. I included a cornet player in Voltigeurs, one of the options provided for in these Victrix sets. 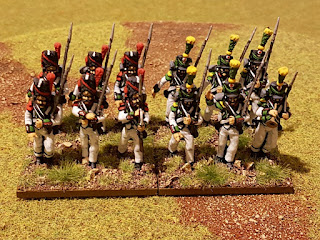 These Victrix figures look the part, though I have to admit assembly is rather burdensome. Every figure needs its backpack, arms, head - and also sabre for elite companies, attached. The plus side is you can get a lot of variety with these (which is particularly nice for the command figures), but more of a modeler's than a wargamer's set I think. The sculpting is also rather fine compared to Victrix's later Napoleonic figures. I added a couple of coats of PVA to the bayonets and top of musket to strengthen them a bit given I've heard other people complaining about breaking them. The later produced Victrix sets like the French Guard and Austrians are more wargamer friendly, with less assembly required.

You get 60 figures per set in these boxes, which includes 8 officers, 4 drummers, 4 standard bearers, 24 standing fusiliers, 12 standing voltigeurs/grenadiers, 4 kneeling voltigeurs/grenadiers, and 4 kneeling fusiliers! So rather lot of extra figures left over here from two kits I got, which I'll find some use for.  They come with plenty of arm and other options, some of which I've used with other plastic kits too, so they are also useful to add variety and conversion potential.

Ok thanks for looking, next up will be a couple of Baden regiments!
Posted by Chasseur at 19:11