More allied infantry painted up. This time two regiments of Baden line infantry from Murawski Miniatures. Figures for this minor state have been long sought after - given they showed up in quite a few battles, so great to have them. In later battles they also shifted to shakos, but I decided I liked the earlier 'raupenhelm' (caterpillar helm) look so went with that in this instance.

Nice figures again, seemingly a little finer in proportion than their Poles, though not noticeable when together with them, and part of that is due to the raupenhelm. I've done up 4 centre companies for each regiment, so I can add the two flank companies later.

Similar to what Peter suggests here, I couldn't stand the sight of the flags mismatched to facing colours and instead chose matching flags.  I wasn't as game to try his yellow/red striped helmet comb under the crest as he was, instead viewing the fact that the crest hides this on these sculpts as a positive feature from the perspective of painting time and difficullty :)

Here's Regiment 3, von Harrant, with red facings.  As Peter notes in his excellent article linked to above, historically most sources suggest they had a blue flag. But I tried it and the insanity of mismatched flags annoyed me too much - so a red flag to match the facing colour it is! 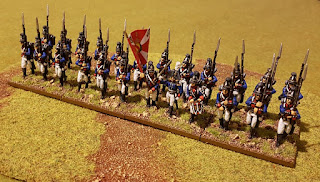 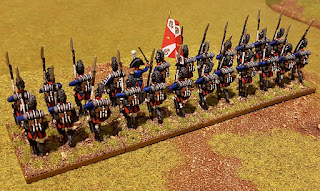 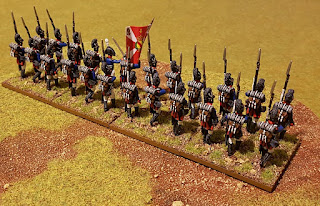 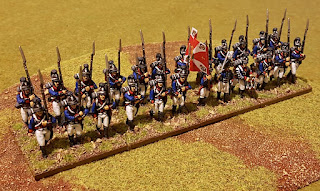 Regiment 2, Erbgrossherzog, with yellow facings. Historically they likely should have the above red flag(!), but I've given  them the yellow flag which matches the facing colours. And which was no doubt the intention until some German bureaucratic bungling or something. 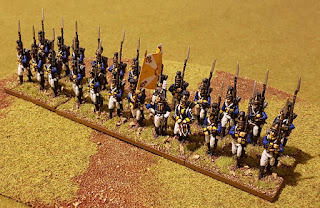 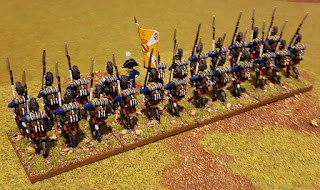 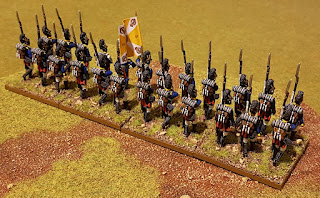 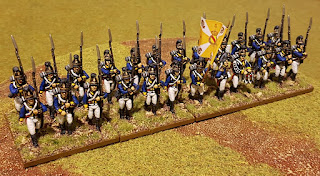 My wife who is German informed me the mismatch of flags was actually done to confuse the enemy, which made me pause for a second or two until I realised she was (probably) joking...

Anyway nice uniforms and figures! And very nice to paint as with previous Murawski miniatures.
Posted by Chasseur at 20:43