As promised here's a short "how to" blog post on assembly of Napoleonic artillery limbers. Hopefully it is of some assistance to some Napoleonic wargamers or modelers out there, including me if someone has even better ideas. :)

Limbers are one of those Napoleonic models with a reputation for difficulty. This is due to the quantity of parts and challenges of (a) knowing how they are supposed to go together, and (b) actually putting them together! Questions like "how do I do the ropes to attach them to the horses?" are prominent. I put off doing my first limbers for some time because of these issues. However, as for many things the anticipation was worse than the actual activity. Advice from the Napoleonic internet community was also invaluable, particularly that from Stephen Walsh from the Facebook Napoleonic Wargamer group as I've mentioned in a previous post.

So first up here's some Perry Miniatures Austrian Limbers, showing all the parts cleaned up and ready for assembly. 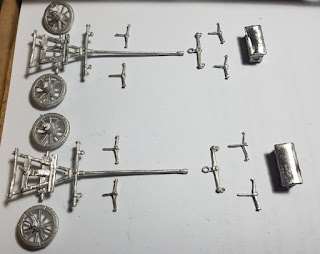 And here they are glued together. I just used super glue for this. Great models, even if the parts are a bit delicate and fiddly. 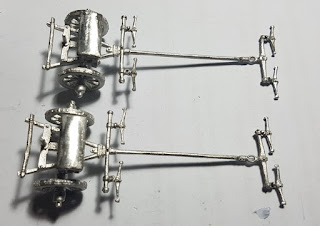 And below, here they are painted up, with ropes added once the rest of the limber was mostly painted. The rope I'm using is Gale Force Nine Three Strand Rope. On each limber I added 8 pieces of rope, 2 pieces to each of the four spindles. Each piece was 2.5cm long (though 2cm would have been ok as I discovered later). The ropes were just glued on with PVA glue.

A tip here is to also put dab of PVA glue on the loose end of each rope to stop it unravelling. You can see some of the ropes starting to unravel in photo below. Eventually I decided to coat each rope with a mix of PVA glue diluted with water to hold it in shape too.  My French Limbers went better I think because I learned a few things from doing these first Austrian ones.

Once the glue had dried, each rope was then drybrushed with a muddy light grey to bring out the texture. 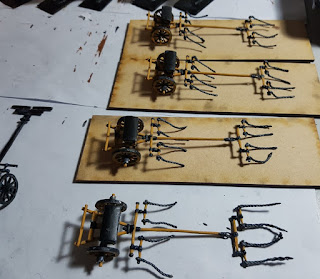 Here's the Gale Force Nine rope I used. I know some other people use copper wire twisted together to make a rope - wound with a drill bit. 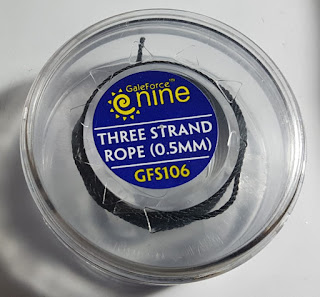 With the limber ready, I then placed the horses on the base, "dryfitting" everything to make sure the spacing was ok before gluing the horses to the base. The bases I uses were 50mm x 150mm. 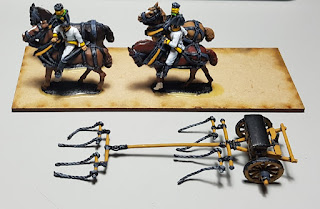 Ok so that is the preparation for the Austrians. Now onto the process for the French Limbers and to show the final assembly stages. The Perry French Limbers are considerably simpler, in that they have only two wheels and the main body of the limber. Unfortunately they are also incomplete. I guess these were some of the first Napoleonics the Perry's sculpted in the current ranges, whereas the Austrians were done later and more detail was judged worthwhile. 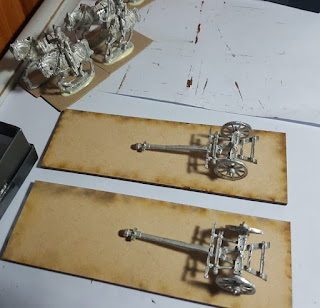 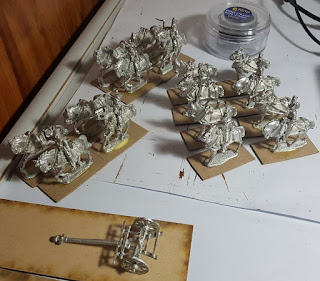 As you notice these Perry Miniatures limbers are not provided with the front crossbar and spindles, which is somewhat disappointing. 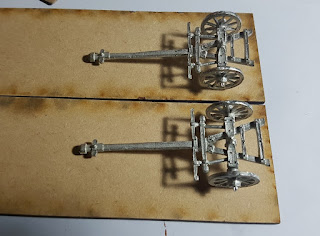 I made a pretty rough and stylised version out of cardboard, replicating the lengths of that at the rear of the limber. The cardboard was then coated with PVA to help strengthen it. 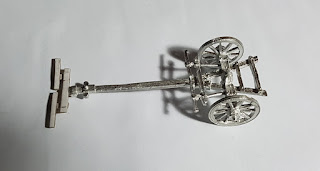 Here it is undercoated and ready for painting. The front scratch built assembly is a bit too bulky, but will do the job of holding the ropes and is not so noticeable at a distance. No doubt a more skilled model maker could make a superior version but this was enough for me.

And below are massed limbers painted, with ropes attached as above, and all the horse teams painted and ready for assembly. 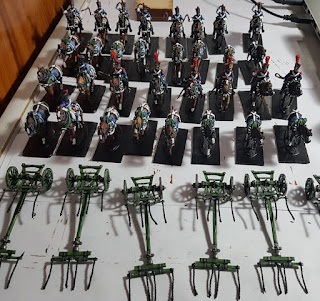 The horses are glued onto the base, the base is flocked, and then the limber is placed in position but not glued. You'll notice in the photos below that the ropes are not yet attached. 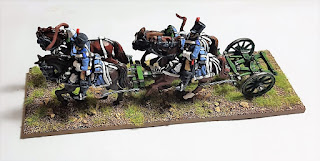 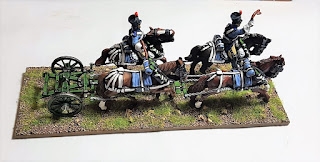 Once I have the limber in the right sort of position, I put a small drop of super glue where the rope attaches to each horse and connect it using a pair of tweezers. I scraped away a small amount of paint from the model with a needle file to give a good connection on the first ones, but then decided that wasn't really necessary on later ones.


I do first one side. 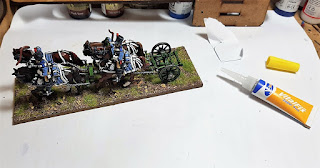 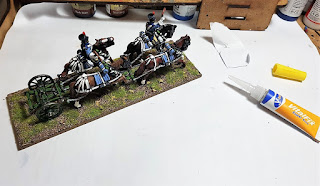 If the rope is being glued under a blanket the length doesn't matter so much and you can just glue it in place. But where there is a specific connection point it must align with the rope must be trimmed to the right length at this stage. Here's a top view to show one of the ropes that needed trimming to match up with where it attaches. (3rd from left at the front). 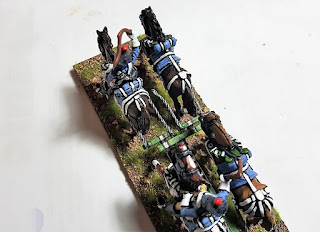 Using a pair of fine scissors I cut it to the right length, and then glue it as for the other connections. You don't need to get it exactly right as a bit of slack in the rope looks ok. 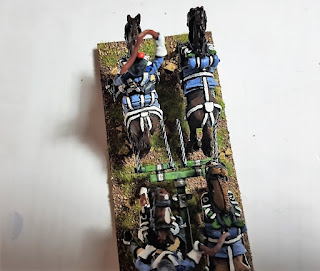 Lastly after all the ropes are connected, I glue the wheels to the base, and that is the limber done.

...Though actually it wasn't quite done, as after this I went and added some extra blobs of slow setting epoxy glue for extra strength where the ropes meet the horses. Then when that was dry I went and touched up the paint job in these areas. This epoxy glue step was not really necessary but should give the whole thing even more strength to survive handling.

So there we are, I hope that is helpful for someone out there! My first limber took me about an hour of fluffing around working out how to attach the ropes, but the later limbers took about 5-10 minutes each to glue on all the ropes which was much better!

A better look at these completed limbers can be found in previous posts.


I hope that is helpful to someone out there. Good luck and please share any tips or thoughts on you might have in the comments below!
Posted by Chasseur at 18:24