Why I undercoat Austrians black...!

But Austrians are white! Yes I know. I have also seen some nice examples of Austrians base coated white and washed with things like Army Painter Quick Shade, and nearly did this myself. But after careful consideration I decided to go with the usual black undercoat. Why?

Well I gave some careful examination to how much white is actually involved on these figures and realised that it's not quite as much as first appears to be the case. I also figured that this approach would better suit what I described as an 'operatic style' of bright colours and strong definition in a previous post on painting. Madness? Perhaps... as might be beginning with 150 figures at a time...

So here we go. By undercoating black and then doing a grey drybrush I manage to 'paint' the knee-high boots, shako, ammo pouch and various other straps and equipment pieces all in one go... that's details I won't have to come back to later and try to paint in over the white, nor all the black detail in recess on the figures. 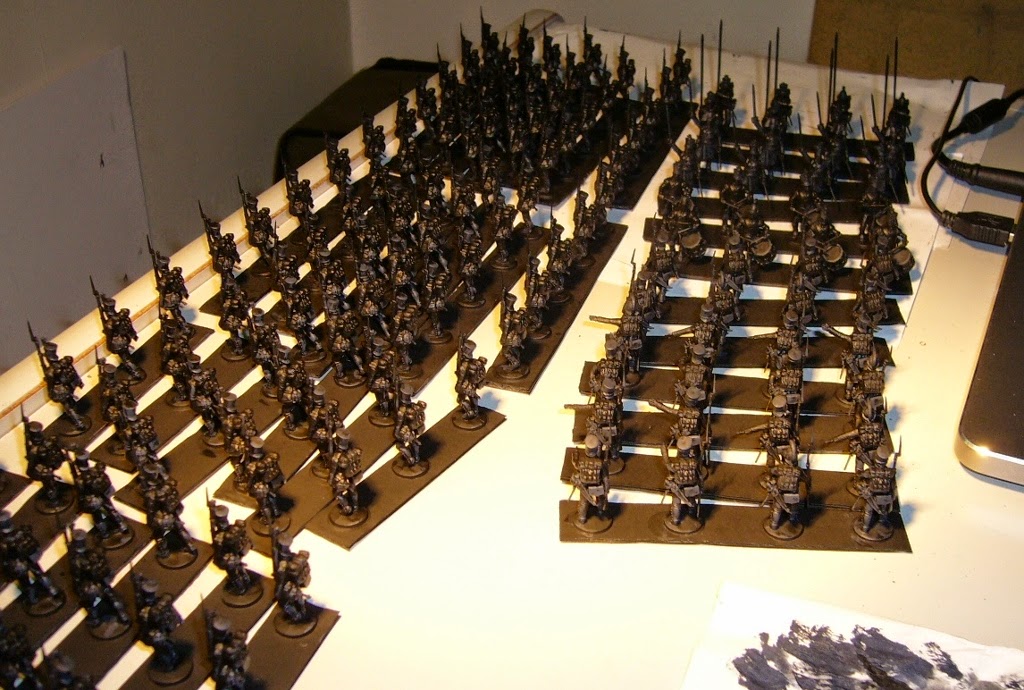 I then use a 'Lupin Grey' colour from Coat d'arms for the base coat for the white.  This offers great coverage over black. Note I'm also leaving some black lines between the different elements of the white uniform like the various belts. Not very tidily done, but will be cleaned up in the final stage by 'black lining' as I described in a previous post on the French. 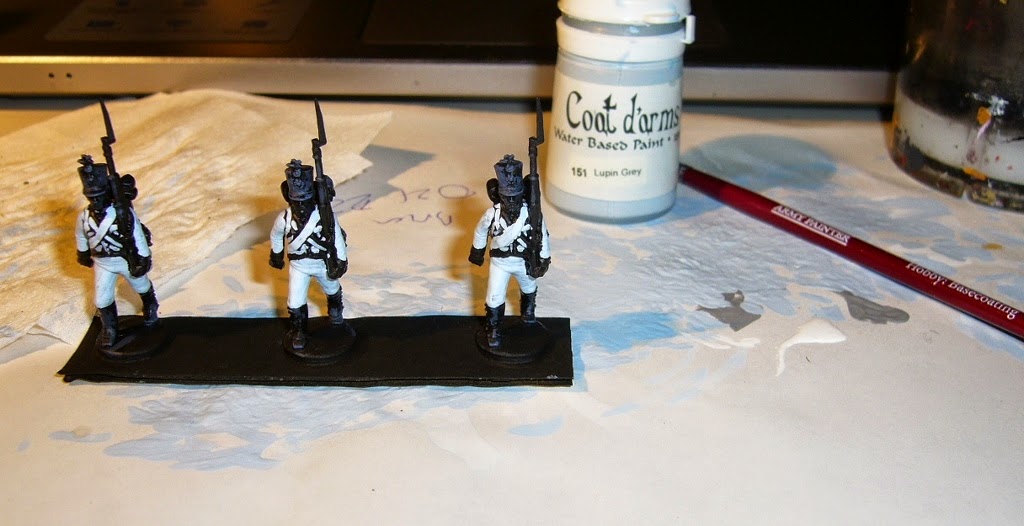 Note how little of the figure is actually white from the rear. 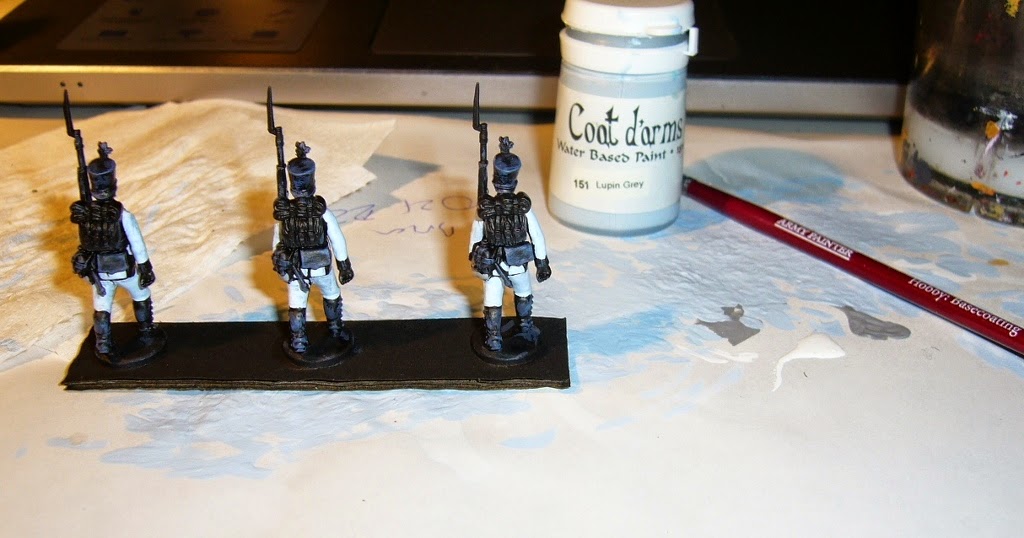 Without the flash better showing the tone of the Lupin Grey paint I'm using.

And 150 figures with the second layer of actual white paint done (Army Painter Matt White) I did a very quick 'third coat' just of this white on some of the larger areas to make it nice and consistent. Checking these out so far I think they will be less time consuming than the French uniforms. The knee high boots in black and other little details like less straps to paint on the backpacks helps. 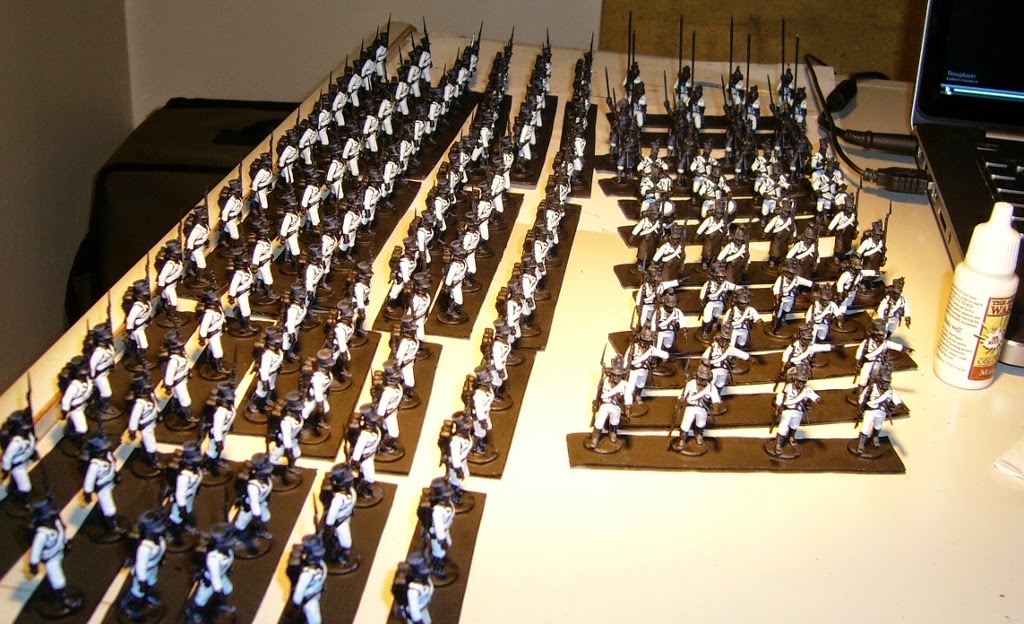 So white is the most monotonous bit done, now onto the rest of the detail. As you can see I've started on these on the closest figures in the photo below. 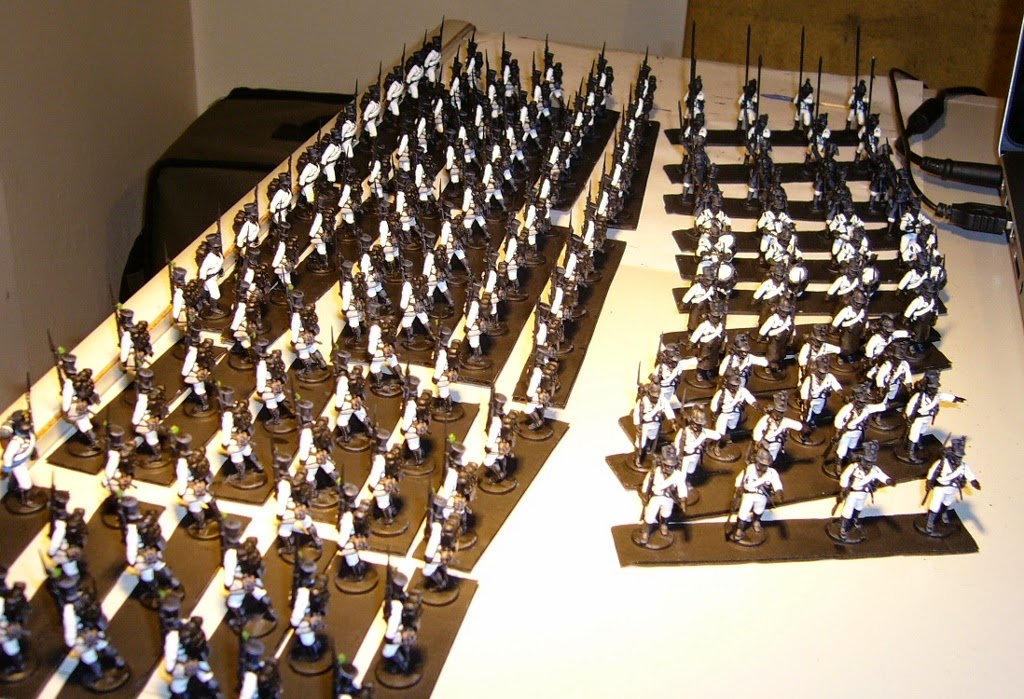 Another 120 troopers need to be added to this lot, which will give a total of 8 regiments to start with. Six of 36, and two of 24, or by reshuffling slightly - 11 regiments of 24. After much agonising over the helmet issue I think I'll give two of the 36 strong regiments helmets and all the rest shakos... That way they can be a bit 1809, with only a few of them slightly wonky for 1813 (when I strongly doubt any still had helmets?!).

I also have 6 Landwehr, 2 Grenzer, 1 Insurrectio and 1 Jaeger regiments to add. Onwards!
Posted by Chasseur at 09:52