Horses - hands up if you're a fan? Not me. I want them done as quickly and painlessly as possible. I was asked how I paint cavalry after my previous painting tutorial, so here's a post on the subject. Once again, I make no claims that this approach is better than approaches others use, this is just what suits me at present!

See my earlier post on painting for my general painting philosophy, which I described as aiming for an "operatic style" using bright colours, bold definition and relatively quick turnaround. With horses I am doing something which at first glance might seem at odds with that. Rather than bright colours I generally go for very dull colours! However the psychophysiology of how our eyes process light and objects means that this works to draw attention away from the horse and towards the intricacies of the riders uniform I've often spent more effort on - and it also vastly speeds up the painting of hundreds of horses! Fortunately, most horses are in fact a rather dull brown colour for most units in the Napoleonic period.

Horse colours tended to be darker for heavy cavalry, with lighter or brighter coloured horses for musicians, some generals and lighter cavalry. Many Napoleonic units also had regulations for specific squadrons (e.g. first squadron on browns, second on bays etc), but such regulations were rarely achieved as I understand it, with units taking whatever horses they could get. Thus I go with a mix of colours in most units, with the exception of a few special units like these Carabiniers. I also tend to go with darker rather than lighter colours (though not quite as dark) even for light cavalry like these Chasseurs - it is just quicker and easier! Having said that I will typically add some slightly lighter coloured horse colours in light cavalry as compared to heavy cavalry, even if it is just lighter browns rather than full chestnut coloured horses.

Another difference from the general painting process I use, is that whilst for most areas of a Napoleonic uniform I  am using only one or two coats, with horses I am using two to three coats. This might seem to work somewhat against the "quick" idea, but horses are such large areas, that in my opinion they just look too flat with only one or two coats. Also with dark coloured horses these coats can be done very quickly with a large brush (and with the black undercoat maybe counting as one of the coats), so it's not as bad as it might sound.  Some people also use washes for horses and achieve great results, but I don't do that at the present time, as they can be cumbersome to control adequately, and they will also highlight any flaws in the horse model.

The first thing I do, same as with painting infantry, is to undercoat the entire figure black, and then do two dark grey highlights - drybrushing the areas which will be black on the final figure. For example, the horse furniture if this was black (harness, reigns, stirrup straps, some of the saddle), and also the equipment of the rider (e.g. boots, equipment, headgear etc). The second dark grey highlight is lighter than the first.

I then start to add the first colours, as can be seen on the figures below. As as typical for me I like to paint relatively large groups of figures at a time. Thirty cavalry figures in this instance. 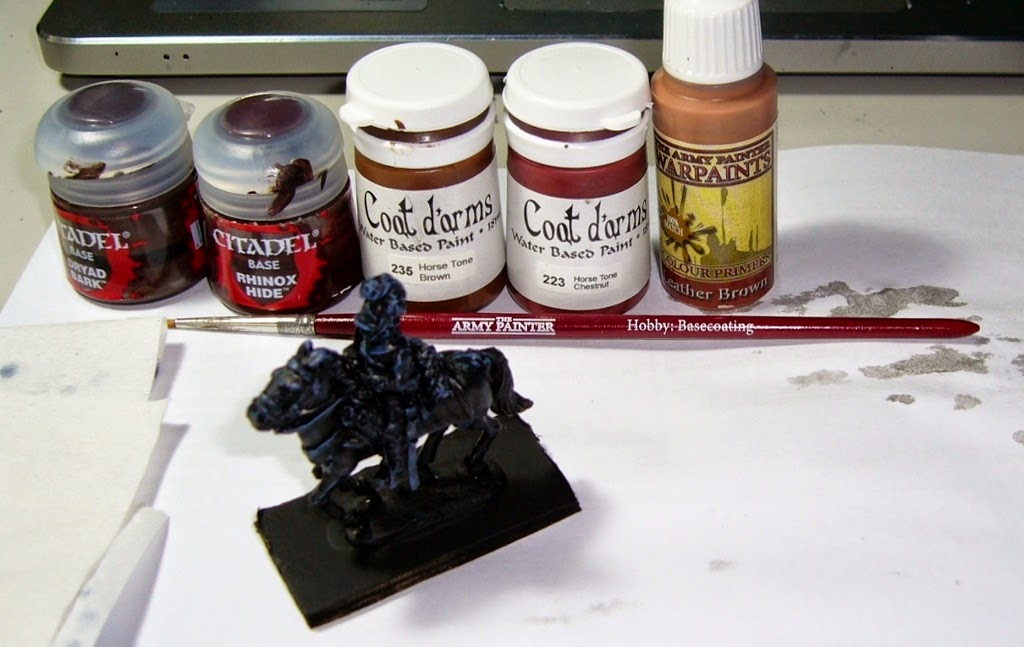 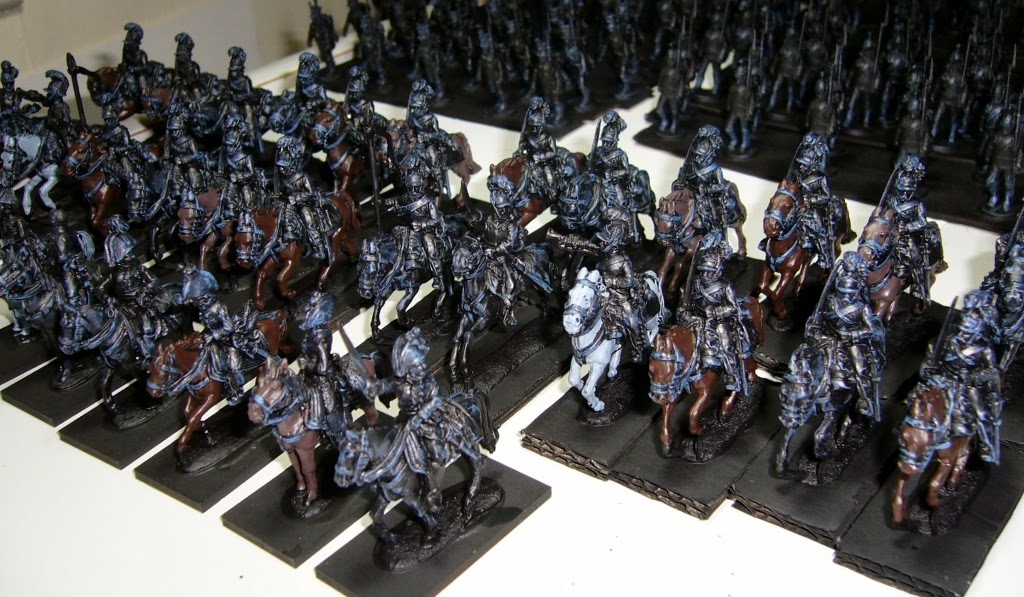 Here are the paints I am using, first five on the left for the brown horses, the three on the right for the grey and white horses. The lighter brown (fifth from left) and lighter colours like it, are only used for doing lighter bay and chestnut coloured horses which I'm not painting any of in this group.

Lets look at several different horse colours in detail, starting with the most challenging - light coloured horses. These take more effort than the other types of horse, as mistakes will be more visible, and there will be more cleaning up of horse furniture afterwards. For this reason I tend to avoid white horses and other lighter horse colours because of the extra effort required, except that I add a few as appropriate for generals, trumpeters etc. In particular Austrians should have some Lippanzer Stallions! Here I have decided to mount Archduke Charles on one (from Perry Miniatures as are all these figures). 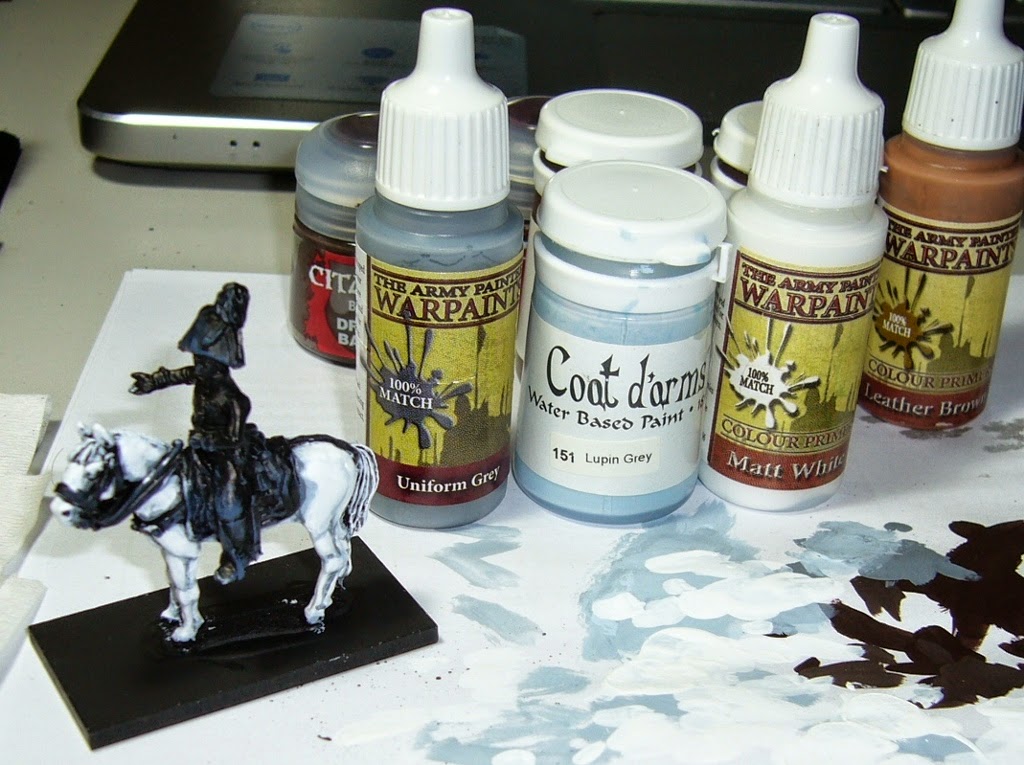 White horses often have different coloured manes, tails and legs (e.g. a darker grey), but I've done this one with white main, tail and legs, like the Lippanzer horses in this video:


Other lighter coloured horses follow a similar process to this white horse - three coats, each steadily lighter, and requiring more care with paint application than do darker horses.  Grey horses might also have dapples, which are easier to get looking right the lighter the grey horse is. Just dot them on with white paint on the upper flanks. And if you want to suffer, then try painting some Pinto horses - not difficult but even more time consuming!

Now for some easier horse types to paint. For a black horse, I just highlight up from the black undercoat with two coats, the second coat lighter than the first, using a dark grey paint. Once again following the musculature, but not taking as much care as with light coloured horses, and with one less coat required 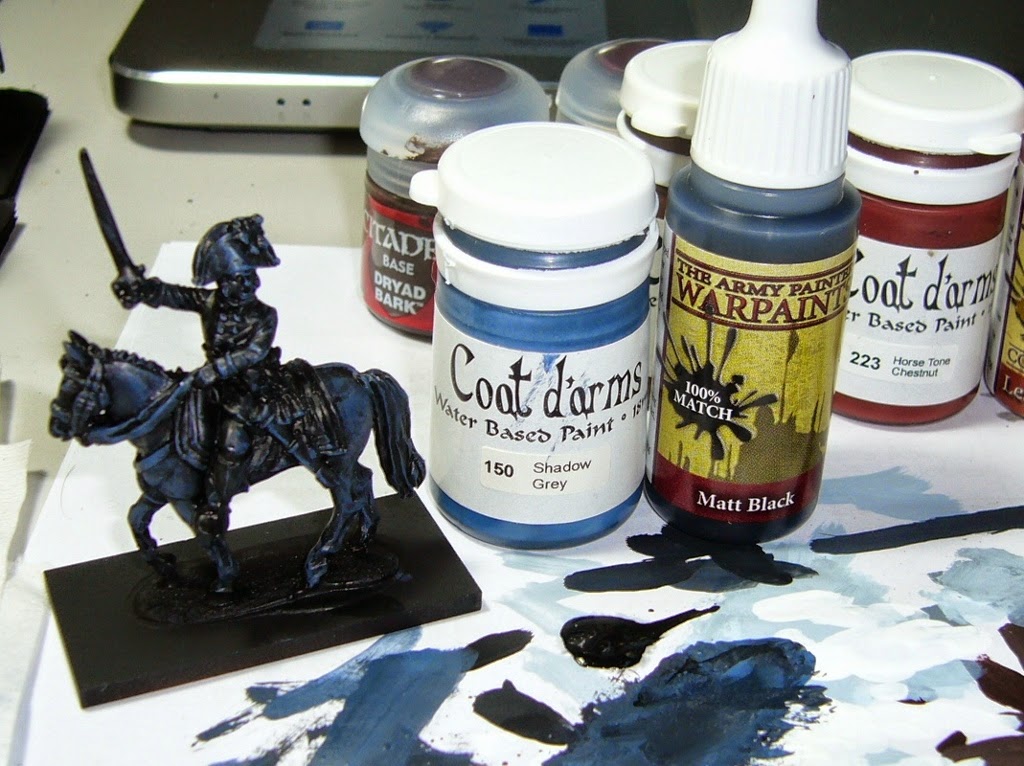 Next some Brown and Roan horses. Each is undercoated with dark brown first (I'm using Rhinox Hide and Dryad Bark from Games Workshop in this instance). Then a 50/50 mix of the appropriate Coat d'arms Horse paint (brown or roan) and the dark brown paint is painted or drybrushed, followed by a second drybrushed coat of the Coat d'arms paint. Note I am using drybrushing more on these horses than on the lighter coloured horses, so this is a much quicker technique. The brush is just a cheap size 4-5 of any brand. Tail and mane on horses are often blacker or black, but here I've done them brown same as the horse. Similarly muzzle and legs are often different shades but I have just done them the same colour once again. Check out the wikipedia page on horse colours if you want to be sure you are painting a plausible horse colour combination. Or look at some real horses. 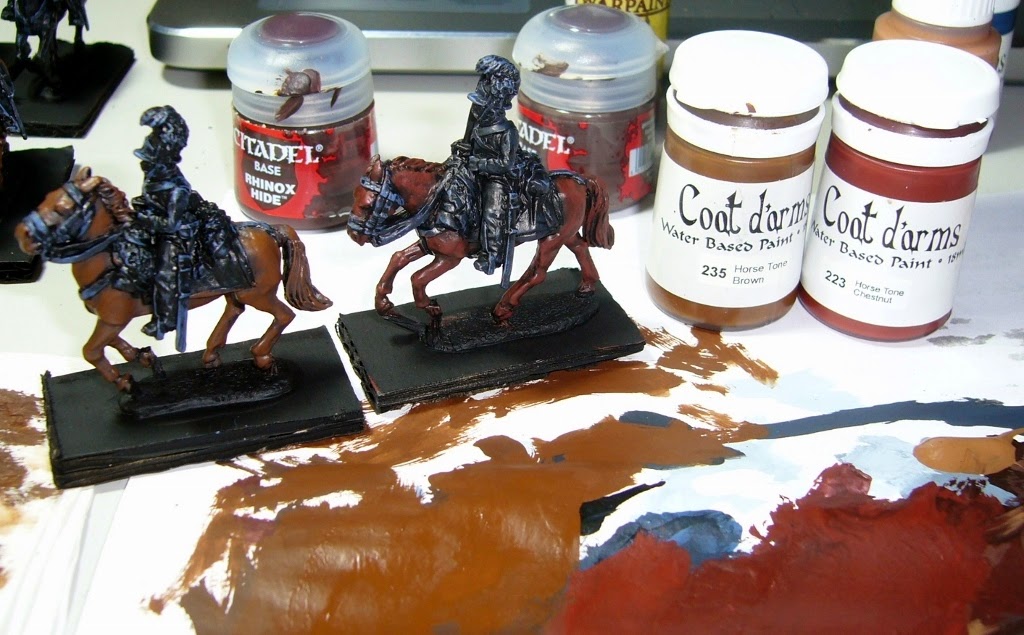 Two dark brown horses of different tones, each is drybrushed with a 50/50 mix of black and brown, and then a second coat with the pure brown. So only two coats on these darker horses. 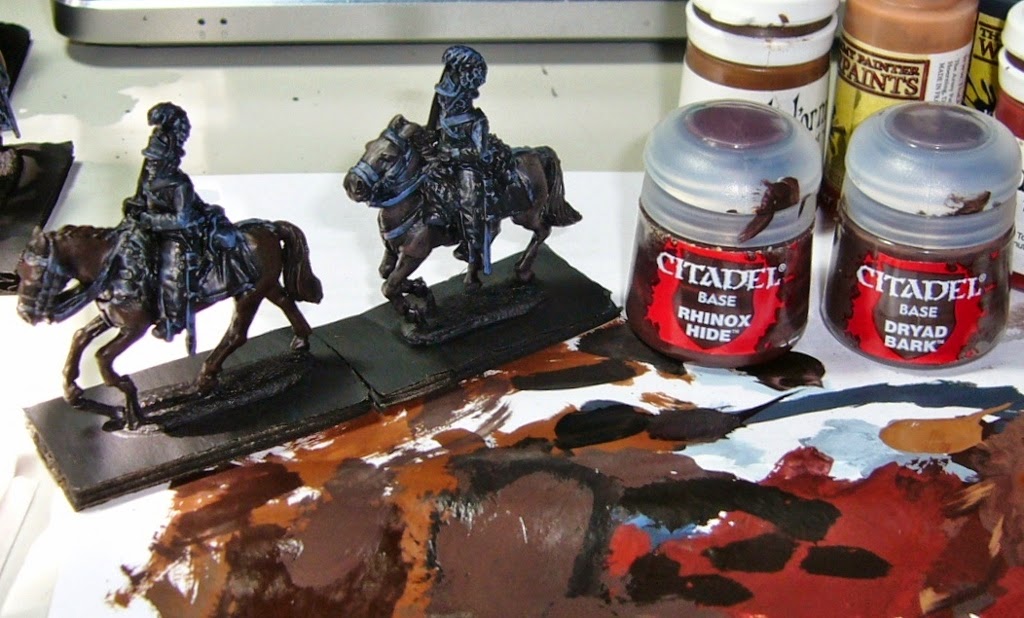 Here's all  the horses with colours completed. I find that at least four different "browns" in addition to grey or white for the trumpeters horse, gives a suitable amount of variation for a unit, and that is what I have done here, in addition to a black for the horse ridden by the officer. 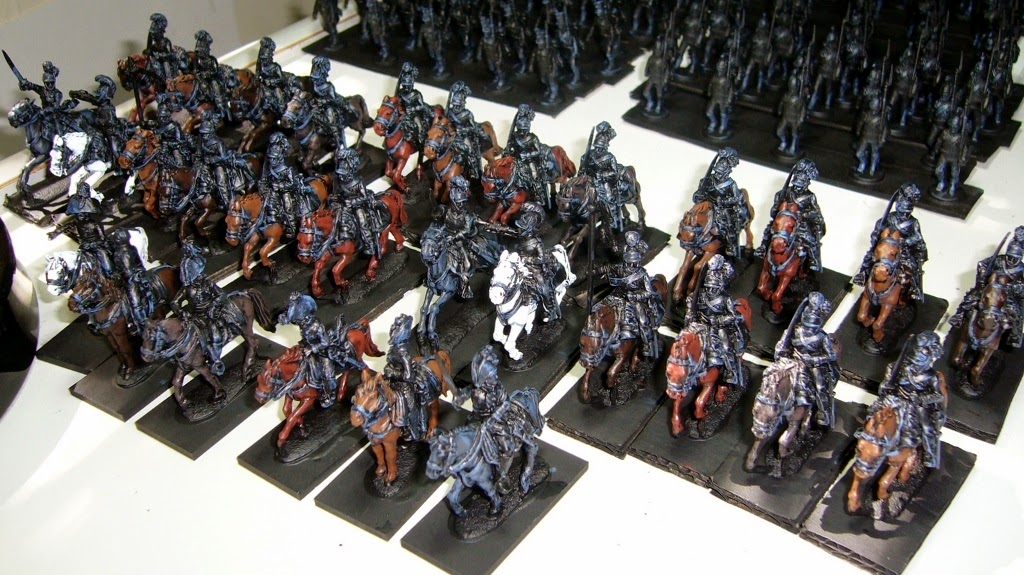 Second to last step is to add blazes/socks etc in either white or black or other darker colours. Here I decided to limit myself by adding some patches of white to the lower legs of the horses and to the muzzle. I then paint the horse hooves black. Not all horse hooves will be black of course, but dressage riders today, and dignified Austrian cavalry in the past, would often use black polish on their horse hooves (at least on parade) and it makes them look nice and clean. Any old dark colour for horse hooves is fine though. 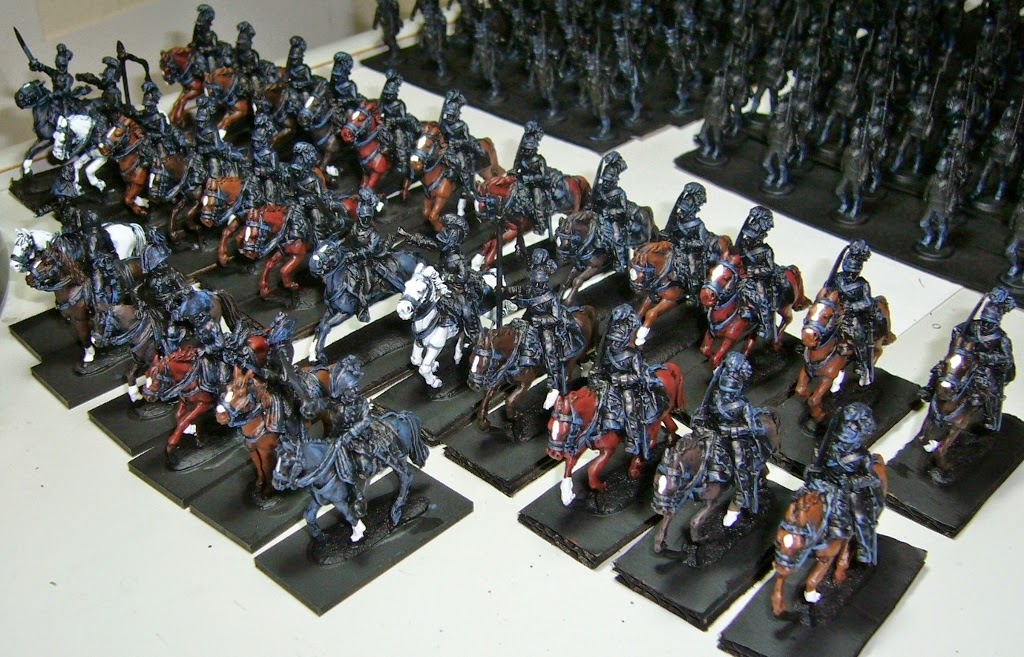 Last step is to tidy up any horse colour that has got onto the horse furniture, using a bit of black and grey as at the very first. More of this effort tends to be required for light as opposed to the dark horses. For this tidying up I also use the blacklining technique described in the previous painting tutorial to more clearly define the horse furniture if this is necessary in places.

At this stage the horses are done, and then the rider (and further details like horse blankets) are painted in exactly the same way as I described painting infantry as in the previous tutorial. And yes the horses and riders are assembled before painting if they are not already in one piece. I've never found this to be a problem.

Thanks for reading! For the sake of completeness I'll also add a post next week describing how I assemble and paint artillery.


(Edit) A few links of interest (thanks to those who suggested them on TMP):