Here's the first units of my Guard Cavalry completed. From front to back are Grenadiers a Cheval, Empress Dragoons, and Chasseurs a Cheval of the Guard.

I encountered a few dilemmas with these. First, ideally I would have preferred full dress versions, (which means a bit more white, tassels, and plumes). However, I sent an e-mail enquiry and Alan Perry said they wouldn't be doing full dress versions. Damn. But as the uniform is still pretty colourful even without the extra bits I thought they would be good enough, and better than alternatives at present (such as Front Rank, which while characterful in their own way, are a bit large and chunky in comparison to my other Perry figures unfortunately). Other manufacturers take note though, there seems to be a lack of Perry compatible French Guard in full dress...! 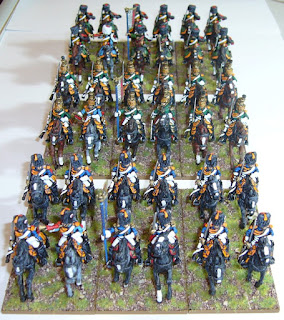 Another dilemma was painting one of the distinctive features of these regiments - the 'Aurore' colour on saddle cloth, braid and so on. This is a tricky French colour - 'dawn', referring to the orange, pinky, yellow colour of the sky at dawn. Though as I notice, that could be quite a few colours... 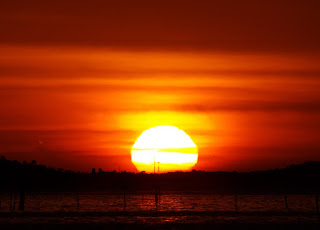 Here's a painting showing one interpretation of it. Looking on the internet you will find paintings, figures and re-enactors with a whole range of orange, pinky, yellow or gold colours. 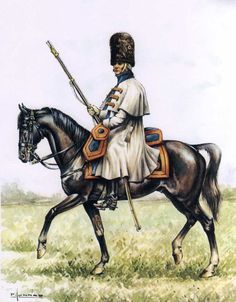 Feeling pretty sure that just yellow wouldn't do, I went with a 50/50 mix of orange and pink, highlighted with golden yellow. These are Vallejo paints (and their "Heavy Orange" would also be a good base I think). This method also suited my aim of going a bit lighter to help correct for scale factors, for reasons I've described previously. 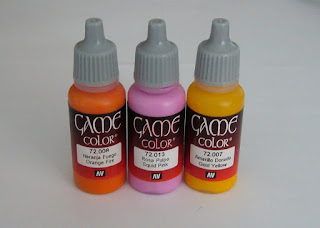 I also asked my wife what she would call the final colour, and she said "orange", which reassured me that the colour was not too yellow and distinctive enough from that seen on other units.

Onto some close ups. Here's the Grenadiers a Cheval of the Guard. Nicknamed "The Gods", "The Giants", or "The Big Boots", by the rest of the army.  These are the "Old Guard" of the Guard Cavalry, wearing tall black bearskins and mounted on big black horses. 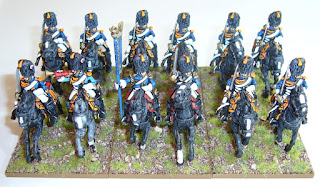 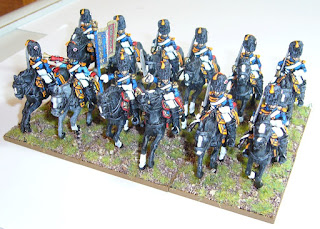 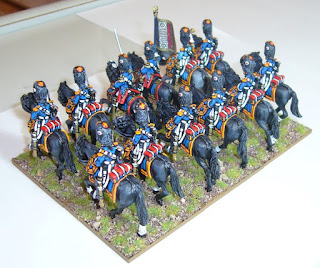 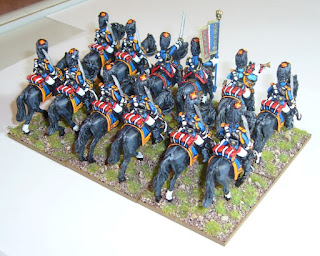 All flags are GMB, and you get all the flags for these three regiments in a single pack. 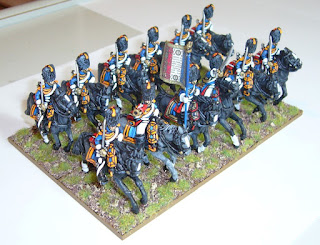 Next, here are the Dragoons of the Guard, also known as the Empress Dragoons in honour of Empress Josephine. They were similarly equipped to the Grenadiers a Cheval, but with brass helmet with horse hair mane and simulated leopard skin cover. 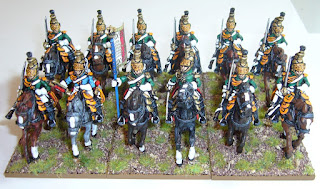 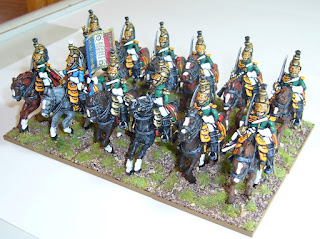 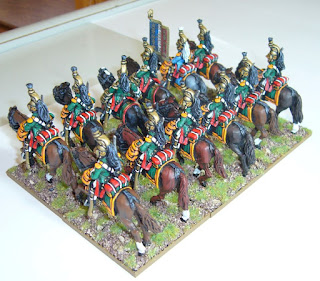 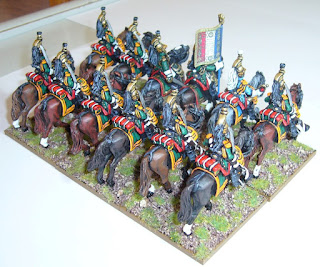 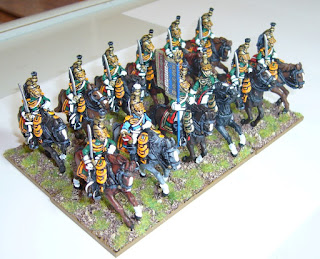 And lastly (for now), the Chasseurs a Cheval of the Guard. Another dilemma with these. I wanted them with their pelisses and wrote another e-mail to Perry enquiring if they came with them. Alan replied again and said no as they are in campaign dress so wouldn't have worn Pelisses except instead of the Dolman (jacket) on occasion. I said I'd like to have a go at converting to full dress versions, and he very kindly supplied the extra pelisses. Unfortunately I rapidly gave up on the idea of converting to full dress due to the challenge exceeding my skill... but I decided to keep the pelisses anyway, especially as they were glued on with epoxy glue already, ha. As my wife wisely said, they are Guard and can wear them if they want! 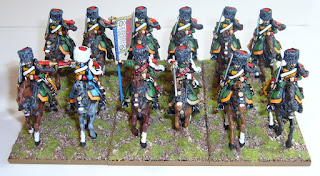 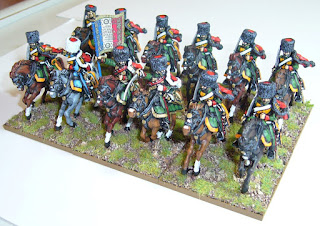 Pelisses add a bit more colour to the uniform and help confirm their Guard status! 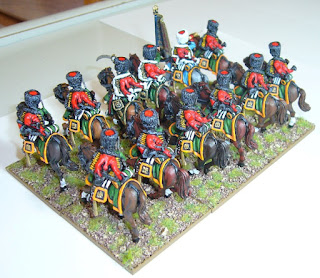 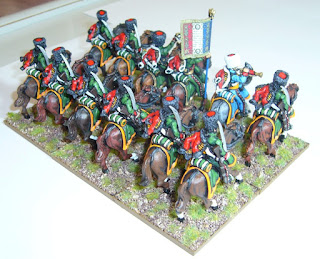 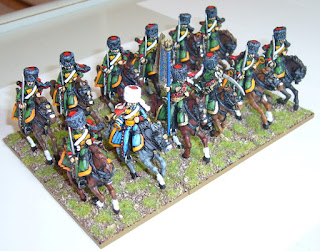 So that's the first half of the Guard Cavalry done. Arguably a few other details could be varied/corrected, e.g. I think saddle cloths of some musicians/officers could be red. Not sure about the white Colpack on the Chasseur a Cheval musician either, but that seems to have been a thing (though not for the Grenadiers a Cheval musician).  Also not sure top of Colpacks were red (the bag thing in full dress definitely was), though I've seen them done this way before. I might go back and add more detail to braid too. But never mind, I'm pretty happy with them all despite the troubles encountered and that's the important thing!

Thanks for looking! Still to come in an eventual Part 2 will be Polish and Dutch Lancers, and the Garde d'Honneur. Weirdly Perry do actually make a full dress variant for these lancers (and Garde d'Honneur will be made from a plastic Hussar set), so these next units will be even more colourful!
Posted by Chasseur at 23:21