A smaller "What if..." battle played today with some Austrians under Schwarzenberg taking on Matt's Brits.  Just 1000 points a side on a smaller 8x6 table this time, with about 1000 28mm figures involved. 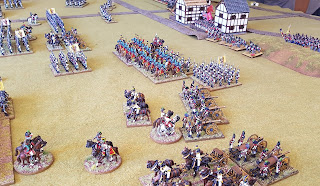 I say "What if..." because of course Austria allied with and fought for Napoleon in 1812, after the  marriage of Napoleon to the Austrian Princess Marie Louise in 1810 helped create a (very) tenuous alliance. As the below period cartoon suggests, Napoleon commanding the Austrian Whitecoats was a nightmare Britain and others worried about! Two huge empires with large Catholic populations united - a renewed Holy Roman Empire... which was not to be in the end. 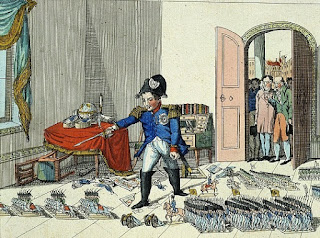 The marriage of Emperor Napoleon of France and Princess Marie Louise of Austria, quite a grand affair! 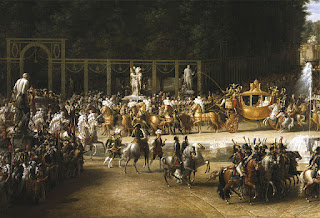 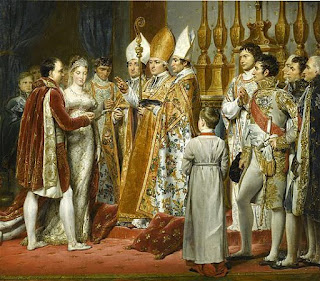 But on with toy soldiers. :) We used the 321 rules again. The Austrian force is as follows. Two Line Infantry Brigades with large infantry units, a Grenadier Brigade, a Cuirassier Brigade, and a Hussar Brigade. The Cavalry and Grenadiers  are all veteran. Also present is a Brigade of raw Landwehr  troops of no great consequence... 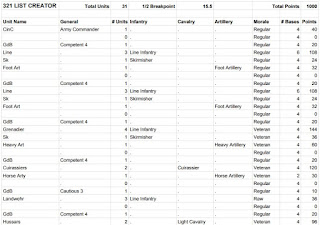 The British also have two Line Brigades, a Guard Brigade, and one each of Heavy and Light Cavalry Brigades. The Guards and Heavy Cavalry are all veterans. Matt's father also came along and took command of the Light Cavalry and a Line Brigade. 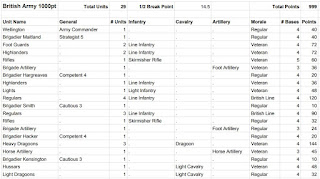 We roll up an Encounter Battle, which meant half of our armies would be off table and only start being available from reserves after a couple of turns. Matt manages to end up with very favourable terrain once again, two large Built up areas securing his right flank and centre, plus an annoying ridge (for me at least) to hide behind!

I have an artillery advantage though, with 14 guns to 9, including veteran Heavy Artillery with my Grenadiers. Given the terrain, I'm content to fight a defensive battle in traditional Austrian style, waiting to see how things develop and hopefully having the artillery tip things in my favour and force some aggression from the British. 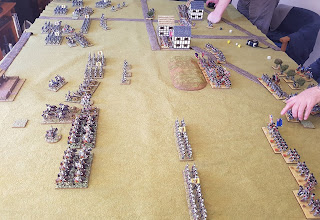 On the right is where the British have the least terrain advantage, so I concentrate my best troops here. 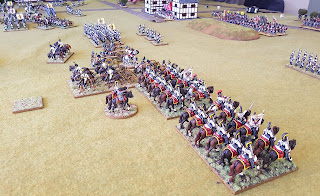 However, once again I largely squander my artillery in fruitless counterbattery fire, trying to silence enemy guns rather than targeting the massed formations... 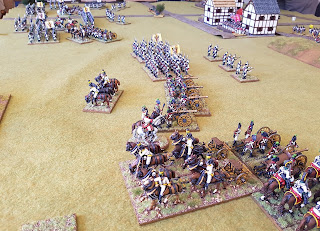 On my left the Veteran British Rifles manage to snipe and break an artillery battery with some lucky dice rolls over a couple of turns, significantly weakening my flank. 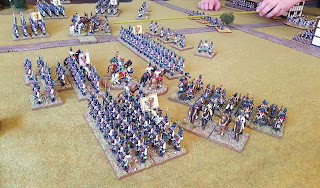 My Austrian Hussars arrive from reserve threatening to sweep over the central ridge with support from my Grenadiers, and the Brits move their own reserves to counter this threat. 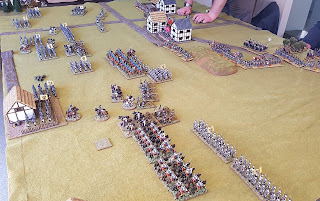 An Austrian Grenadier unit crests the central ridge and forces a British unit to withdraw, but is then shattered by well drilled British volleys and breaks.

With my left flank artillery gone, the British veterans switch to the attack, as my own more numerous skirmishers force the Rifles back. 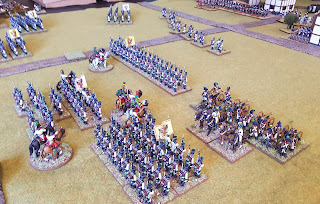 On the right, my Cuirassiers and Grenadiers still await some softening of the enemy with artillery. 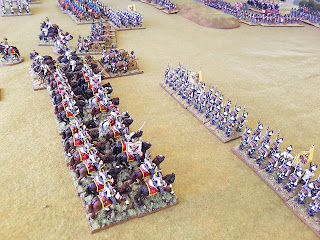 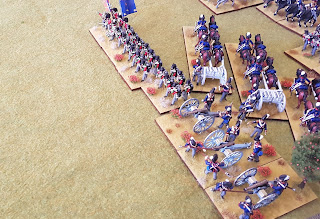 Austrian regulars move to engage the oncoming British veterans on my left, getting lucky and inflicting heavy casualties on them. Large Austrian units have their merits! 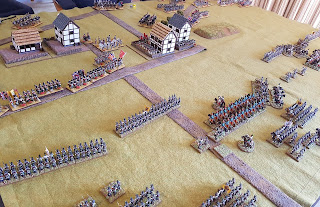 Unfortunately just as I have the enemy at a critical disadvantage, almost the entire Austrian staff decides that this is an excellent time to "hold", rather than press the attack!  Schwarzenberg's urging is ignored... The British get some breathing space for a turn and retire back to their defensive positions to reform. 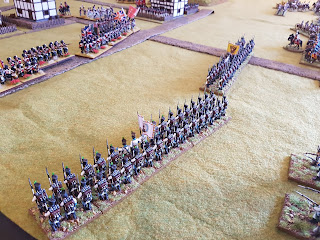 After multiple turns of standing around engaging in nothing much more than long range artillery duels, and mostly wasted counterbattery fire at that (though not for the British Artillery which manages to knock out my Horse Artillery!), I decide it's time to send in the cavalry. hoping to force a decision in the last couple of turns of daylight. 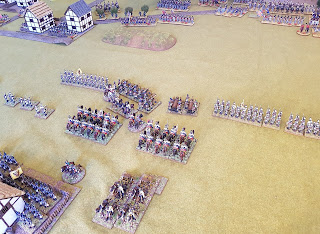 Half my Hussars are countered by enemy Hussars and the other by infantry forming square. Both sides Hussars render each other ineffective in a protracted melee, while my other Hussars retire fatigued from the square. 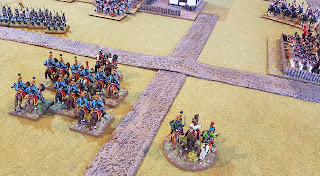 The British Dragoons favour discretion and avoid tangling with the Austrian Cuirassiers. The  regular British infantry is up to the job though and their squares resist several charges from the frustrated Cuirassiers. 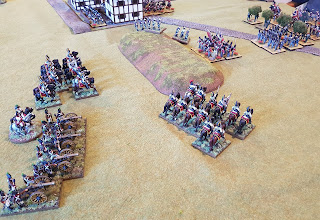 So ends the battle with a victory to the British, with one Austrian Brigade broken and 10/16 losses towards their breakpoint, as compared to paltry 2/15 for the British! Some better plans are needed by myself in the future if the British are to be defeated...
Posted by Chasseur at 22:49