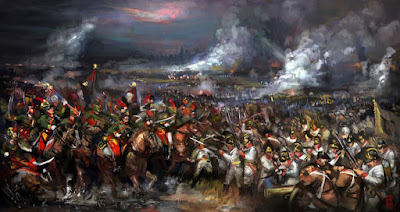 Perhaps the last thing the world needs is yet another set of Napoleonic wargame rules...  there are already hundreds out there after all! But many wargamers like to tinker and share ideas, hence this post.

I enjoy playing different rules, but I do place a high value on simplicity - meaning if a similar result can be achieved more simply I'm in favour of it. What is consciously left out of a ruleset can be just as important as what is included, and if something can be said or effected with less words then then that is preferable.  With this in mind, I put together the following brief ruleset.

The aim has been to reduce rule mechanisms and non-figure gaming materials (tokens etc which I find unsightly and a bother) to a minimum of complexity needed to create the character of Napoleonic Warfare. This is so very large scale battles can be completed in a day of play, while still using low level units like battalions. A goal is also that new players (and especially more casual players) can just have ALL the rules for free, and that these are as brief as the quick reference sheets from other rulesets at just four pages in length. Of course judgement about what counts as sufficient detail to 'create the character of Napoleonic Warfare' is very subjective, but the notes below should at least give an idea of the design philosophy and mechanics for any interested.

'321' in the title refers to the primacy of psychology highlighted by Napoleon's quote above and the relative worth of units in game (veteran versus regular versus raw). It also references the design principle that these rules should be as easy as 'A-B-C' or  '1-2-3'. It might also reference the mechanic whereby standard units can take three disorder hits but are removed if they take more...

Character of a Napoleonic Battle?

The rules aim to create the general character of Napoleonic battle as described by Clausewitz (On War, Book IV, Chapter II):


"What do we do now usually in a great battle? We place ourselves quietly in great masses arranged contiguous to and behind one another. We deploy relatively only a small portion of the whole, and let it wring itself out in a fire-combat which lasts for several hours, only interrupted now and again... by separate small shocks from charges with the bayonet and cavalry attacks. When this line has gradually exhausted part of its warlike ardour in this manner and there remains nothing more than the cinders, it is withdrawn and replaced by another."

I.e. a large Napoleonic battle should see massed multiple lines, engaging and then being withdrawn and replaced when they become too brittle (casualties, fatigue, stress and panic, fouled muskets, lack of ammunition etc). If attrition exceeded ability to replace the lines, then sometimes Napoleonic battles led to catastrophic routs, but also quite commonly:

"In this manner the battle... burns slowly away like wet powder, and if the veil of night commands it to stop... then an account is taken by each side... out of which there springs the resolution to quit the field or to renew the combat on the morrow."

In absence of otherwise specified victory conditions then breaking one third of the enemy force is taken to be an arbitrary but significant impact, likely to cause the enemy to retreat and allow proclamation of victory (i.e. suitable victory condition for a points based pickup game).

Thank you for reading. Please feel free to comment and critique - I won't be offended. :)