Hills are needed for wargames, and how to represent them is a dilemma.  The classic problem is that 'realistic' curved sloping hills are not great because figures tend to slide down them, or at least look odd leaning on funny angles. The way to avoid that is to have very shallow slopes, but then it ends up hardly being a 'hill' at all due to the reduced ground scale you use in wargames (i.e. where one figure represents 20 men or so). On the other hand flat-top or 'step' hills are great for figures to stand on, but don't look as natural.

After some consideration I decided to go with the latter flat-top hill idea, preferring this to having  hills with figures are sliding or leaning at odd angles on them. However, I still chose to give the hills some slope on the side and combined with the paint and flock finish they look more natural than some of the step hills you see used - at least to my eyes.

Here's one of my new hills below, with Austrian Hussars and Artillery for scale.

For these hills (and templates) I commissioned local wargaming buddy Clinton Whelan to make them all to specified dimensions, leaving me with only the flocking to do. Thanks Clinton! Time is precious, and Clinton is something of an expert at terrain making, managing to produce it efficiently and quickly in large quantities. Hence his products are popular with many local wargamers. Another local Napoleonic wargamer recently had some hills made by Clinton, and I knew I had to have some when I saw them!

These hills and templates all have a 3mm MDF wooden base (cut out irregularly with a jigsaw, and beveled with sand paper/sander), with polystyrene stuck on top with PVA. Clinton apparently just uses a standard craft knife to shape the edge of the polystyrene to make the slopes. Here's some work in progress shots Clinton sent me for review. 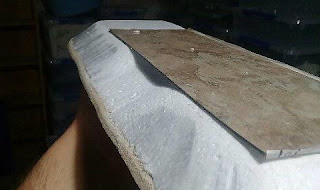 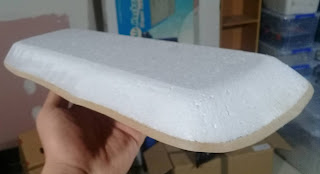 After they are shaped, Clinton coats the whole thing in thick mix of PVA and sand. This makes the whole structure very solid. He then paints them brown and drybrushes a a couple of lighter brown colours over the top. Normally Clinton adds his own choice of flock after that, but I wanted to use my own in this instance in order to better match my figures and table. 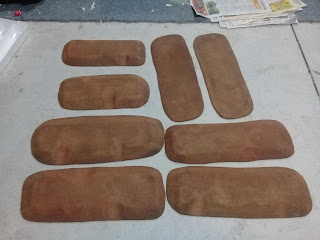 And here is the finished result. Many hills and templates! 2 x large plateau, 4 x long ridge, 2 x shorter ridge, 2 x medium hill, 2 x small hill, plus loads of templates for forests, rough ground etc. I may still do some more work with flock etc, adding more of the colour matching the ground mat, but they satisfactory at this stage I think. 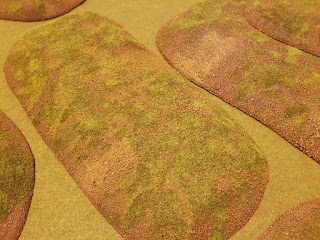 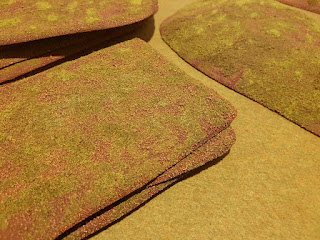 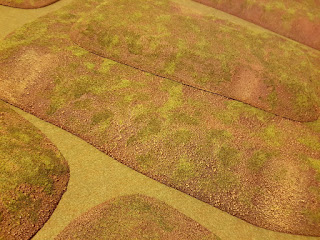 Lots of scenery! Filling up a 6'x4' table, but a good amount for some of the 6'x12' and larger battle fields and scenarios I have planned. 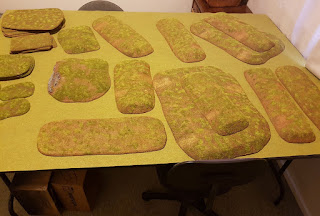 Casualty markers are something needed for all the various Napoleonic rulesets I play or have played recently, General d'Armee, Blackpowder, and Lasalle, included. Casualties in these systems are generally taken to represent a combination of casualties, fatigue, and sometimes general disorder. Overall the more casualties a unit has taken the more its morale and effectiveness is degraded. Number of hits needed varies according to rule system. For example in Blackpowder and Lasalle each standard unit can take up to 3 hits, while in General d'Armee each standard unit can take up to 12 hits.

It's a simple system that avoids multiple cumbersome traits for each unit, or fiddly casualty removal, hence it's popularity. It seems that many rules, even the Games Workshop ones, are requiring casualty or damage markers these days. How to represent them is the question.

One of the easiest ways to represent casualties is to just stick dice next to units. The trouble with this is the casualty dice might be knocked over by other dice, or accidentally picked up, and it's a bit fiddly rotating the dice trying to find the right number each time. And of course it detracts somewhat from the visual aesthetic of the game.

Casualty dial bases are another option. For a nice example see fellow New Zealander Brian Smaller's casualty bases here. I have a load of casualty figures and I might get around to doing these some day too. Warbases make wooden casualty dials and Litko make acrylic ones. Local New Zealand company Battlekiwi makes both wooden and acrylic dials and offer a bulk discount.

In previous battle reports I've used fire and suppression blast markers that I use for 6mm sci-fi gaming.  They are not really the best thing for Napoleonics though, as barring a few canister rounds from artillery most firepower impacts didn't involve explosions. Also I didn't have enough of these once game size increased, and I would need a lot more for bigger games.

An alternative I eventually decided upon is the following. With most plastic 28mm figure boxes these days you get extra bits. For example in Perry French and Austrian Napoleonic boxes you get extra heads to provide you with options. And in Victrix Austrian boxes you get twice the number of backpacks you need (so you can make Line or Grenadier units).

It struck me that these extra bits could make some characterful, non-obtrusive, and also low modelling/painting effort casualty markers that would be suitable for a variety of Napoleonic rules. I ordered some cheap plastic counteres off e-bay. I then stuck spare shakos and backpacks onto them with plastic glue (cutting the shako off the head first). A quick undercoat, paintjob and some flock, followed by heavy varnish, resulted in the following which I'm pretty happy with. 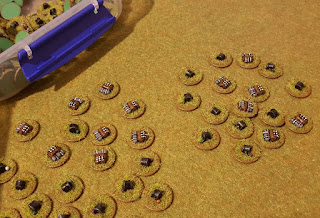 In General d'Armee the shakos will represent one hit, and backpacks four hits. This has the added advantage that it will help make degrading points clear. I.e. in General d'Armee at 4 hits and 8 hits a unit suffers cumulative degrading effects on its firepower/melee/morale – so having distinct 4 hit counters is a useful reminder that this has occurred, i.e:
1 Backpack = -1; 2 Backpacks = -2 (to shooting, melee, and morale tests) 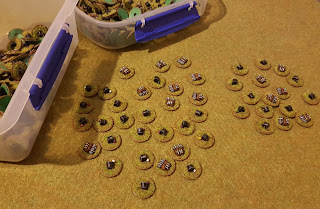 The other thing I've been working on is more terrain - many hills and templates. These will follow soon in another post!
Posted by Chasseur at 11:15 20 comments: