Here's a report of a small divisional action, taken from Michael Hopper's "Road's to Vienna" scenario book. The Battle of Gospic, the first day May 21st 1809.

As I've mentioned before, while people tend to think of the huge battles of the Napoleonic wars, there were many more smaller actions. These can be quite interesting and much less effort to set up and play, so this is another of those!  Battles this size are also good for beginners who don't need to paint thousands of figures to get started, or if you have limited time.

In this action in Croatia, Austrian General Rebrovich's Grenz reserve force crosses the Licca river to threaten the flank of the main French line of advance. French General Marmont sends a division under Montrichard to push them back and take the bridge and village.  Montrichard is dithering in confusion and so Marmont rides over to take personal command of the action. Historically, a hard fought battle resulted with significant casualties on both sides, and I believe all three French Generals were wounded.

Here's a view of the battlefield. The river is impassable except at the bridge. Hills are good going in the scenario as written and played here (though looking at photos of them on google street view, they might be better classed as rough perhaps!). 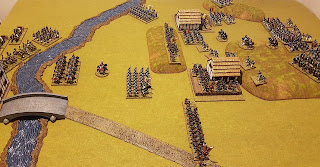 The Austrians have a single large unwieldy division of Grenz reservists under the sole charge of General Rebrovich. The French have two Brigades, with Marmont in overall command as an Army Commander. All generals were rated as competent for these games.

We diced for sides, and my opponent Andrew ended up with the French in the first game. My Austrians deploy up to the two hamlets. In the scenario the two Austrian batteries have to start deployed on the left side of the river guarding the bridge approaches.  Here's the battlefield after opening moves by the attacking French.

The French advance on the hamlets with the weight of their force on their right. They assault and quickly take the upper most hamlet, breaking the Grenz recruits defending it.

The Austrians then counterattack and retake the hamlet with a Regular Grenz unit, breaking the French line unit that had just been victorious. 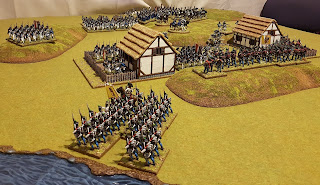 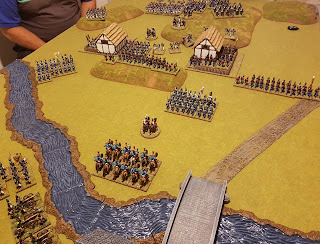 On the right I advance with the Recruit Grenz to chase back the Chasseurs, rather bravely and foolishly deciding to meet them in line. This goes poorly and the Chasseurs run the Grenz down... and charge on and break the Recruit Hussars before retiring out of range of the Austrian artillery. 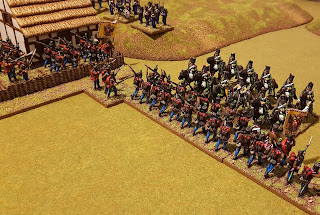 Meanwhile a massed assault from three directions by the French, also breaks the Regular Grenz unit in the hamlet (on the left below), and retakes this. 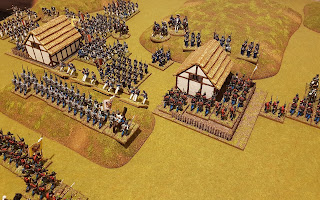 Things are going rather terribly, so I pull back the Austrian forces towards the bridge. The large recruit Grenz unit on the right leaves the hamlet retreating back in square to hold off the Chasseurs.  The other Recruit Grenz unit manages to retire over the bridge in march column. 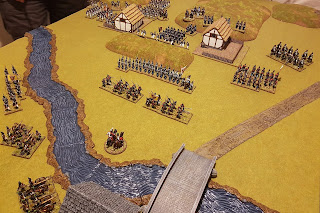 Withdrawing in the face of a massed enemy like this is not easy! The Regular Grenz on the left break a French attack column that charges them in an attempt to quickly end the business. However, both Austrian units remaining on this bank of the river are rapidly falling into further disorder. 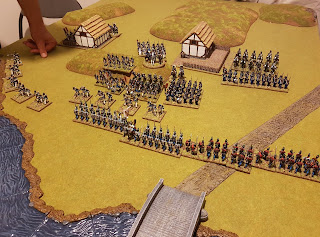 The Recruits break under fire and the Regulars, pressed from all sides, also do so in quick succession.  With that the Austrian Division breaks. There is not time before dark for the French to attempt to push on over the bridge but they have won a 2-0 victory. 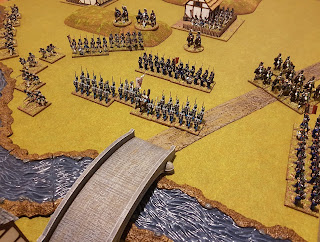 We switched sides for a second game, and Andrew sets up the Austrians. He decides to garrison both hamlets with the Regular Grenz units, which we both thought was a good idea to make these harder positions to crack. 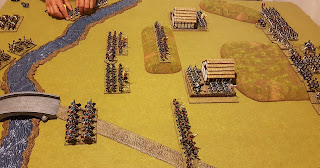 The French spend much time preparing the hamlets for assault. Fire against garrisons is highly ineffective of course, but the French have numerous skirmishers to pester them at low risk to themselves. Trying to causing some modicum of disorder before charging seems wise!

The Austrian units in the open also suffer heavily from skirmish fire and begin to fall back. Rebrovich tries to rally the central Grenz unit on the hill with a fine speech, but is felled by a skirmisher, causing some further disorder before he is replaced. 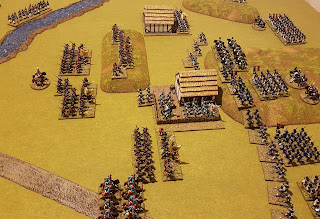 The French press forward around the now isolated hamlets, which are still holding on, with French units reluctant to close with them despite the urging of their Generals.


The Austrian General is also unable to give any commands except hold and retire most of the time,  but that seems to work in their favour by discouraging too rash action! 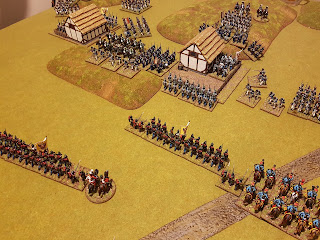 The Austrians manage to exact a heavy toll, including French General Launay who is felled by some long range artillery fire while trying to rally an attack column. The Austrian Grenz steadily retreat and file over the bridge one unit at a time in an orderly manner. 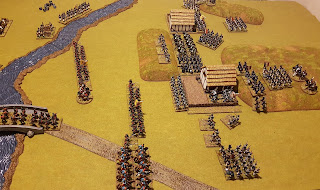 The Austrian Hussars move to intercept the Chasseurs as more Grenz escape. 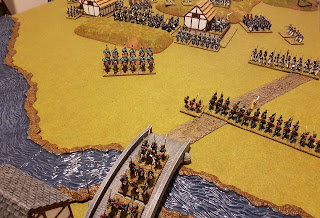 Disaster for the French now, as the Chasseurs charge but are routed by the Hussars! The Hussars retire back across the bridge, job well done. The French take the uppermost hamlet breaking the Grenz there, but lose another unit in the process. Their Brigade skirmish line then also breaks seeing the rout of the Chasseurs and Infantry, on top of the loss of their General. This breaks Launay's Brigade! 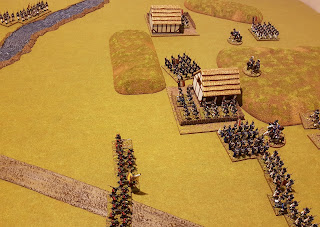 The Austrians have lost two units but have managed to break a French Brigade, so win 1-0! 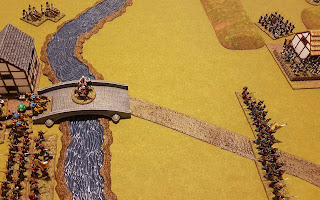 So there we have it, two games with a victory for each side. I managed to lose with both the Austrians and then the French!

This is an interesting little scenario, with the Austrians needing to inflict as much damage as they can on the French, while at the same time not leaving it too long to retreat and suffering heavy losses in return, as happened in the first game. There's a fine line between putting up an insufficient fight, and committing too heavily to it!  There's an interesting question too about whether or not you relocate your artillery across the river - both of us decided that doing so would be too risky. Trying to manage a fighting retreat, or pressing this as the French is a challenge.

There's also the question of how to class various aspects of this battle. I did not rate these Grenz as Light Infantry (able to adopt skirmish order) for this battle, as I understand the Austrians were trying to de-emphasise this in drilling these reservists. Doing so would change the flavour of the battle and be an interesting alternative. So would making the hills rough rather than clear going in line with my earlier comments on this, as this would slow the French attack down and further limit the role of the cavalry.
Posted by Chasseur at 20:11