A game between my Austrians and Matt's Russian Empire today in a tournament style game.  Historically Austria and Russia only fought in 1812 of course, but I can see this being a repeated contest... 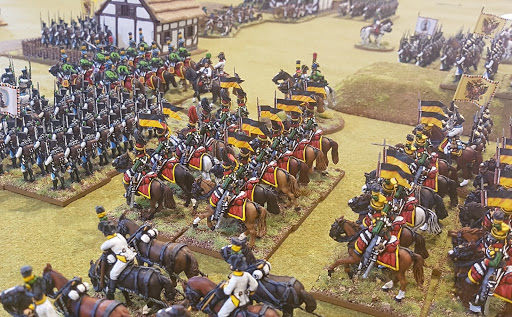 Here's the Austrian list I used, which was made using the random army generator on page 5 of the 321 Fast Play Napoleonic Rules. 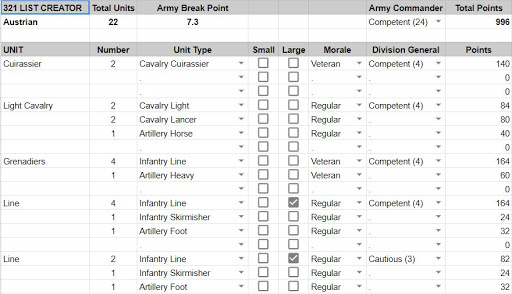 Matt's Russian and Prussian Army was the following. 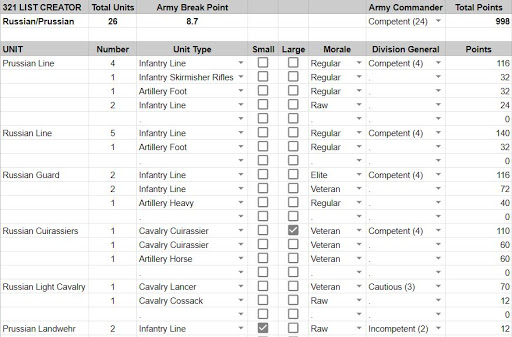 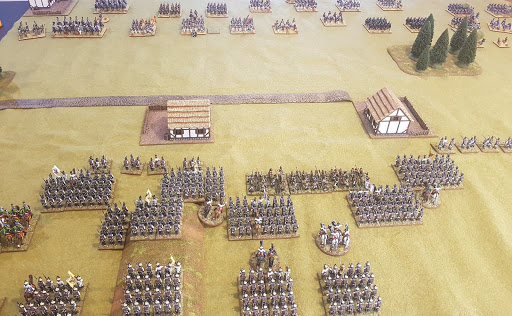 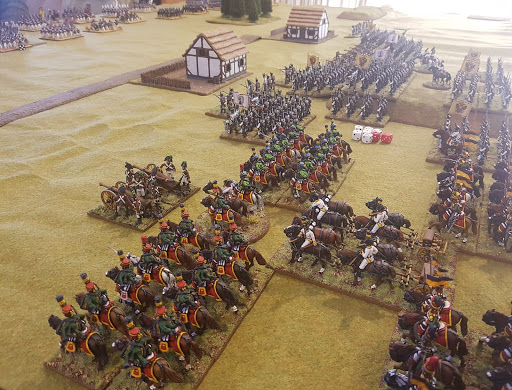 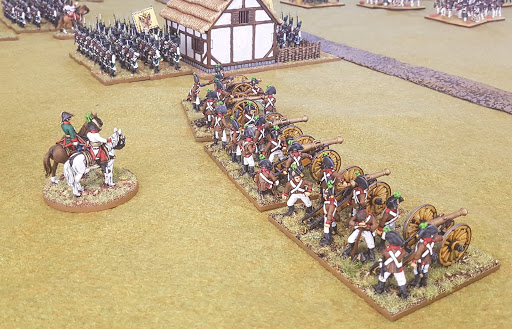 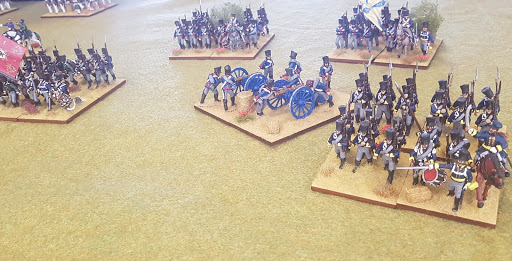 My left flank and centre, heavily reinforced with Grenadiers in reserve. 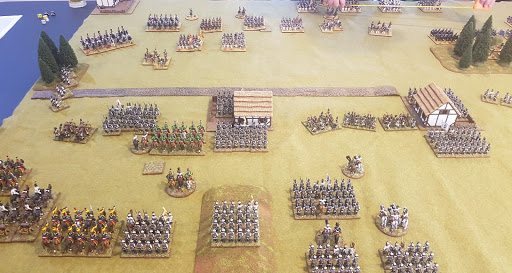 On the right flank though...  just the Austrian Cuirassiers, aiming to slow the enemy wing so victory can be achieved elsewhere. Perhaps not the best use of reserve heavy cavalry... 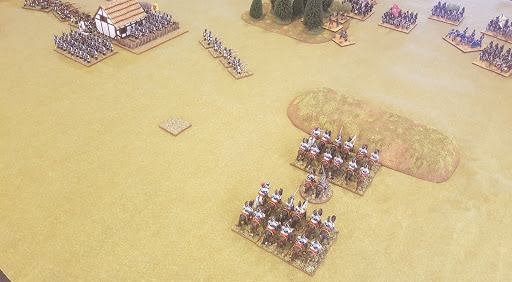 On the left, horse artillery batteries exchange fire, with neither side wanting to commit to an attack. An Austrian regiment takes heavy casualties and is withdrawn.  The Austrian grand battery in the centre eventually silences an enemy battery and starts to take a toll on the Russian infantry. 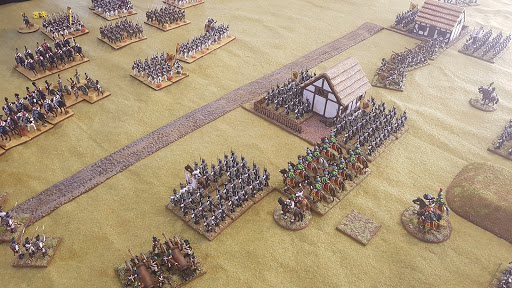 A newly painted Russian Cuirassier unit charges and gets lucky against an Austrian unit, breaking it. 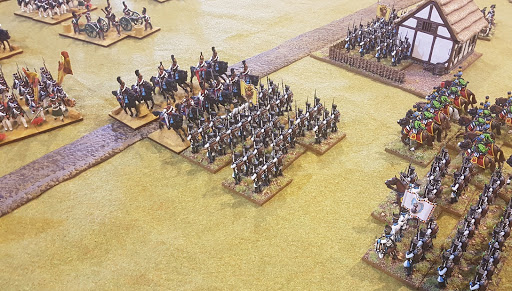 The Russian Cuirassiers are spent but remain in control and retire safely to reform. 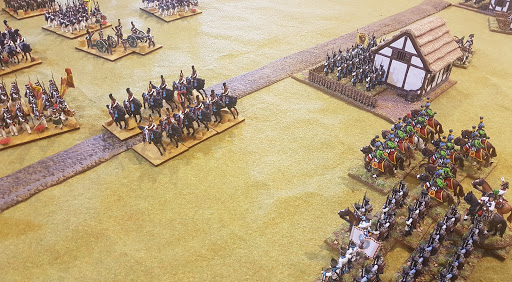 On the right my own Cuirassier charge is thrown back by Prussian squares. 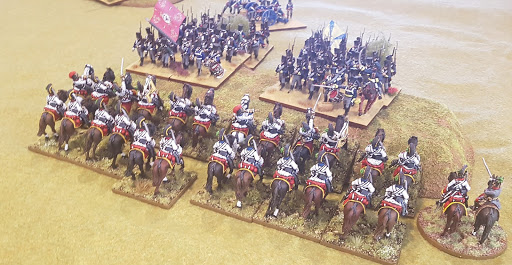 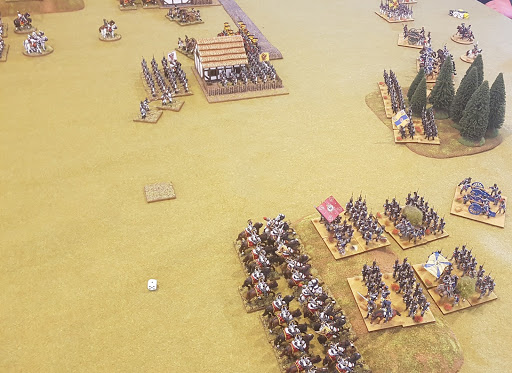 In the centre, the Austrian heavy guns have been silenced by counterbattery fire and Jaegers. Austrian Uhlans ride forward to counter this enemy but are met by Russian Hussars. 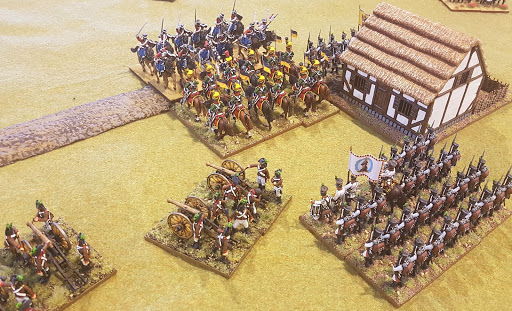 The Hussars break the Uhlans, and charge on into the guns... 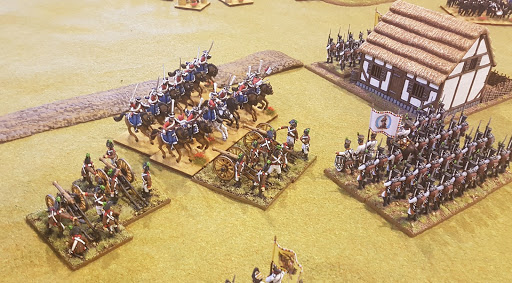 Sabering this battery too before retiring. 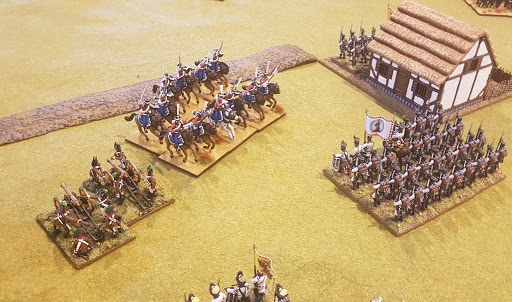 Two Russian cavalry charges have taken a significant toll, and the Austrian skirmishers are also lost. Both sides end up losing their Horse Artillery on the Austrian left flank. 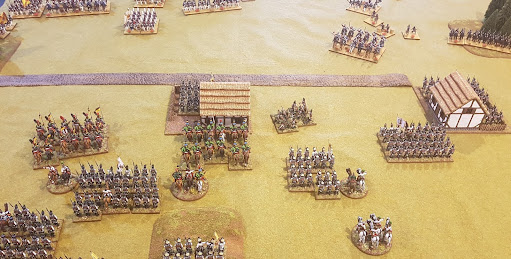 Things are not looking good for the Austrians, and I commit the Grenadier reserve. 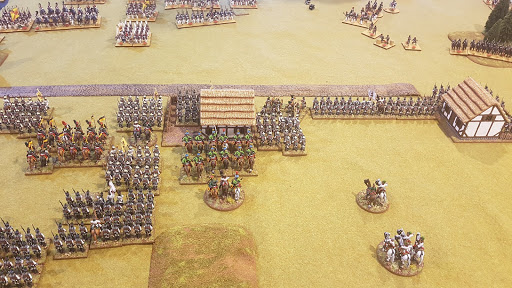 The Russians organise for an attack to push the Austrians to breaking point.

But the Grenadiers are awaiting them in line and deliver deadly volleys. 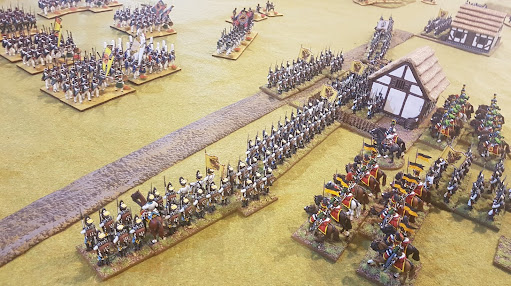 The Russians commit their own Guard who suffer heavily against the Austrian Grenadiers. 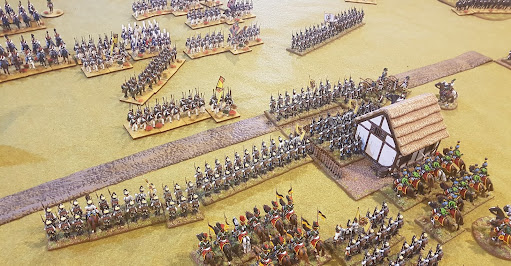 In the distance the problem on the Austrian refused right is evident though. The Austrian Cuirassiers have been forced back by the slowly advancing wall of Prussian infantry and artillery, and one regiment eventually breaks under this pressure. 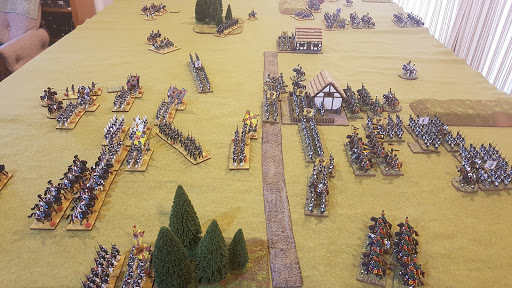 With this loss the Austrian army also breaks, having lost a third of their force.
Austrian Losses: 3 Infantry, 2 Cavalry, 3 Artillery 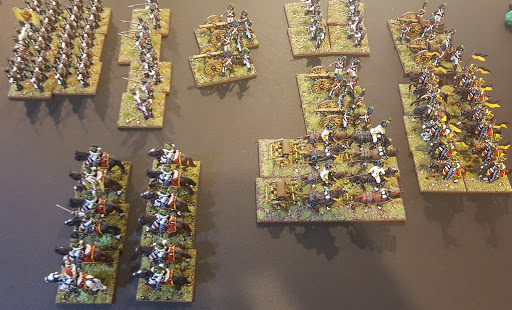 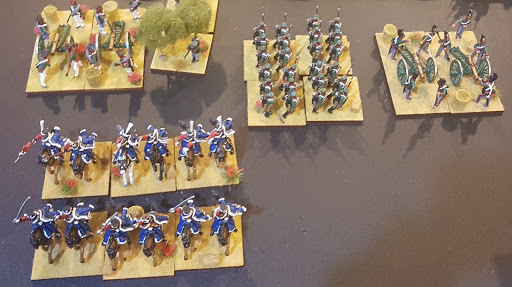 An interesting contest. Several turns were spent in a cautious artillery duel, before casualties amongst these batteries gave confidence to the advance of other arms. The Russians looked to be having a tough time of it, but then the new Russian cavalry did great work - if getting a little lucky perhaps! Some errors on my part didn't help. The Austrian Cuirassiers were put in an untenable position with no horse artillery to support them against infantry and artillery. My artillery may have been too attracted to counterbattery fire, though this was not without effect. Committing my Grenadiers earlier would have helped, but Austrian command problems hampered this movement from occurring as quickly as I would have liked.  The two regiments of Russian Cuirassiers opposing my left, nullified my four regiments of light cavalry, though the points value of these two forces was roughly equal so this was not a poor trade. And most importantly of course, much fun was had! :)

For reference, the game lasted nine turns at a sociable pace, and took four hours, including all the setup and interruptions from me having to attend to some urgent work calls.