Three regiments of Chasseur a Cheval for post number three. I'm quite fond of Chasseurs (as you may have guessed given the name of this blog!), so I painted up a good number. They're often overlooked in favour of prettier and more powerful troops by wargamers, but the humble Chasseurs were the most common subtype of French cavalry for much of the Napoleonic wars. Needless to say "humble" is the description others gave to them - the Chasseurs thought themselves equal to Hussars and I understand that quarrels between these two types of light cavalry were not uncommon. Napoleon created many regiments of Chasseurs because the less elaborate uniforms and smaller horses were comparatively inexpensive. They were used for scouting as well as for battle.

These are metal Perry miniatures. Not as much a fan of these as the Perry plastics, and arguably Chasseurs should have been one of the first plastic sets given what I just said about how common they were historically! Hard to get as much variety in pose with metals, and I've done nothing more than a few head turns. Also while painting I kept finding little bits of flash I had missed when cleaning up, so I will be more careful with cleanup on my next metal unit from Perry. Nonetheless they turned out ok I think. The castings are nice and still have some variety.  Horses and riders are slightly smaller than the Perry heavy cavalry which is excellent and appropriate.

I chose the 16th (sky blue facings), 19th (aurore yellow facings), and  25th (madder red facings). I gave the officers matching coloured breeches to brighten them up a bit and so they won't feel so envious of the Hussars... Here's a useful link with facing colours of the various Chasseur a Cheval regiments:
http://www.histomin.com/wppaintguide/paintguidenap/pgchasseursfr.htm 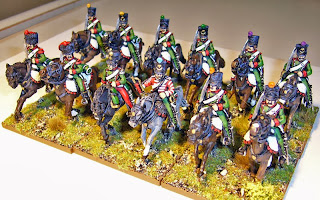 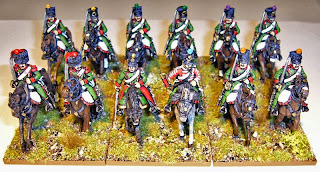 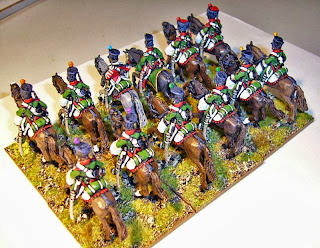 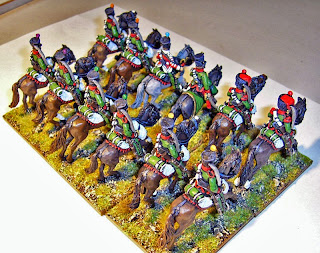 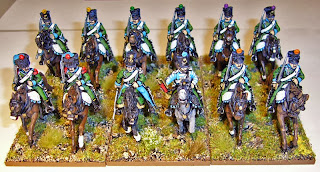 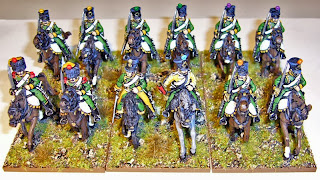 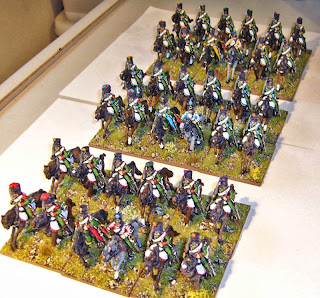