Following on from my last post detailing our New Zealand refight of Leipzig, here's an account my Cavalry Corp in this action. As listed in a previous post, 2nd Cavalry Corp consisted of the following:

In which General Sebastiani avoids Lancers but meets Cuirassiers...

I was ordered to occupy the allied forces in this sector, pressing their flank and forcing them to commit reserves. Essentially my attack was to be a diversion from the main action.

Thus obliged, my Corp advances rapidly upon the enemy position, led by the light cavalry. The allied flank is defended by the Prussian Reserve Cavalry consisting of 2 Cuirassier regiments, a Landwehr Cavalry regiment, and a Horse Artillery battery. Immediately the Austrians detach two infantry regiments to support them, and 5 Russian Cossack regiments also arrive to threaten my left flank. 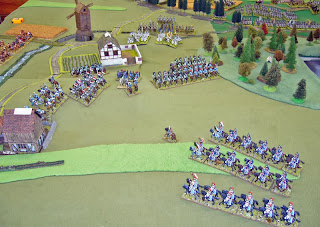 The 4th Light Cavalry division charges the enemy immediately, pinning one of the Austrian infantry regiments in square where my Horse Artillery battery starts to take a heavy toll on them. This Austrian square also blocks return fire from the Prussian guns. My Heavy Cavalry division advances, and I send a request for infantry support.

The 2nd Light Cavalry division charges the Cossacks, who choose to hold as they are defending a river bank. My Lancers distinguish themselves by riding down two regiments of Cossacks before retiring to reform, but my Hussars disgrace themselves in this encounter and retire, though still in some order. Admittedly the Hussars were assaulting across a river, and the enemy had both rear and flank support... 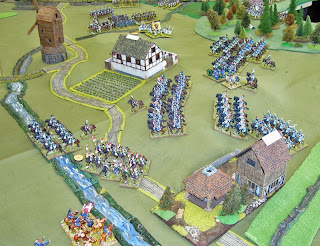 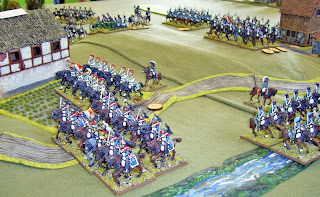 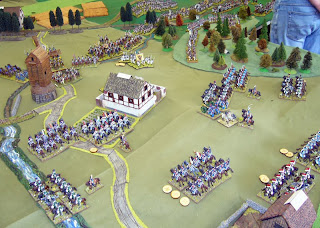 In the following turn my Cuirassiers charge again, breaking a Prussian Cuirassier regiment and then retiring to reform. Things even up again. My units are fatigued from the constant action but their Generals rally them successfully. The second Austrian infantry regiment takes the town of Hirshfeld and fires upon my nearby cavalry. My Horse Artillery disorders the other Austrian infantry regiment which is still pinned in a square by my cavalry. 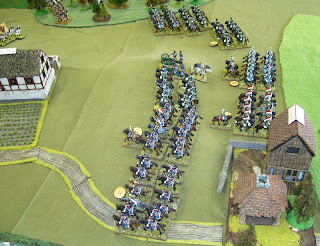 On the next turn there is another setback, as the surviving Cossacks have got around behind my position. They charge into the rear of a Chasseur regiment from 4th Light Cavalry division and break them! 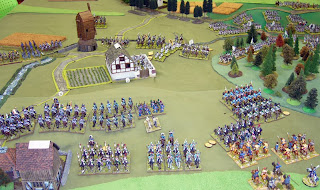 I charge some Prussian Landwehr Cavalry with a Cuirassier regiment, but this is another embarrassing action by the French, and both sides retire after an inconclusive combat. An Austrian Hussar regiment joins the allied forces but refuses to advance. Two regiments of French provisional infantry arrive through the woods on my right flank and occupy the Austrians here. However I am aware that these militia will be of limited help to me, especially as yet more Austrian infantry is moving to intercept. I retire my regiments to rally and deal with the accursed Cossacks that are still causing a nuisance. 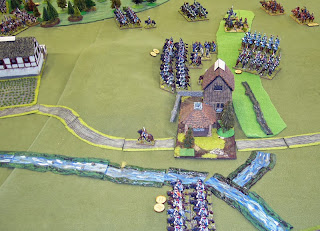 I finally receive reinforcements in the form of a Dragoon Division of 3 regiments... hurrah! However they promptly misinterpret orders and head off in the wrong direction for a turn - Merci! 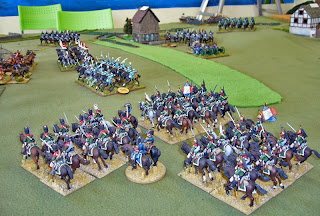 Unfortunately the allies reinforce with a Cuirassier Division of 2 regiments and another Horse Artillery Battery. They move to join the Austrian Hussars who have been disobeying orders until now, and all of them advance upon my position. The pressure is slightly relieved when they too misinterpret orders and spend a turn retiring rather than advancing! 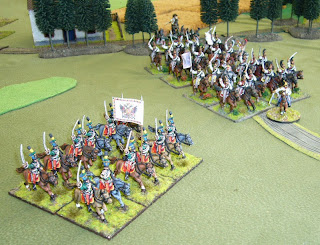 A disastrous sequence of events then unfolds as a Prussian Cuirassier regiment breaks one of my French Cuirassier regiments (hardly surprising given their previous display against the Prussian Landwehr cavalry).  The same fate then befalls the Hussars of 4th Light Cavalry Division as they are attacked by Austrian Cuirassiers.  The enemy Cuirassiers are spent in these engagements and retire shaken, but two of my three Divisions are now broken and will be forced to withdraw! 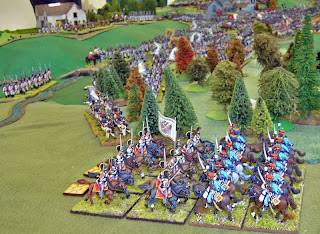 Meanwhile the Cossacks are finally driven off with a whiff of cannister from the Horse Battery, and a decisive moment arrives. General Sebastiani personally leads the Hussars of 2nd Division in a glorious charge against a shaken Prussian Cuirassier regiment. If successful this action would break Prussian Reserve Cavalry Division.  The charge goes badly wrong however, the Hussars are beaten off and General Sebastiani suffers a serious wound and is forced to retire from the field! 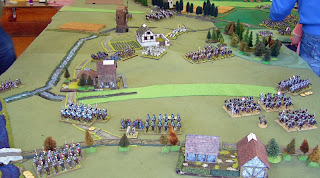 My Horse Artillery opens fire and the Prussian Cuirassiers and their Division finally breaks. I throw the fresh Dragoon Division into the fray against the fatigued Austrian Heavy Cavalry Division and drive them back, but my Dragoon Division is also exhausted by this engagement. 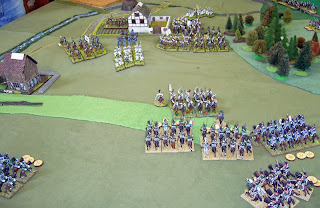 At this point five of my six remaining unbroken regiments are shaken, Sebastiani is incapacitated, fresh Austrian Cuirassiers are arriving, and the situation is looking grim. I order the retreat while I can rather than having another two divisions break and the situation turn into a rout. The allies are left in possession of the field!  Quelle catastrophe! 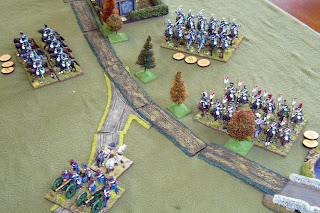 Congratulations to Tim and Paul who commanded the allied forces in this sector! Had I some infantry support I could have accomplished more I think, but it was needed elsewhere in the larger scheme of things.

The Blackpowder rules seemed to give a nice fast and tense game in this encounter. We got the hang of them quickly after having only limited experience of them. They borrow many mechanisms from the old Games Workshop "Warmaster" system, but seem like an improvement, especially with a few houserule tweaks implemented by the organisers. The command tests create a much needed fog of war effect without time consuming complexity. The combat matches well enough the historical accounts I have read of cavalry actions of this time, with the cavalry charging and then retiring to rally before charging again. Divisions gradually became ineffective as regiments are shaken, disordered, or implode in rout.

Cuirassiers are very fearsome, but not to the point that they become invincible against Light Cavalry as I discovered (damned Landwehr!). Cossacks are not to be sniffed at either if they get behind you and I'll be less contemptuous of them next time. We wondered if Horse Artillery might have been a touch overpowered in its ability to redeploy and fire so effectively - but perhaps not given it was able be unlimbered and firing in less than a minute as I understand it. Anyway,  great game and I look forward to the next encounter!
Posted by Chasseur at 16:29