For my own reference I've been collecting some links from the 200th anniversary commemorations of the Battle of Nations at Leipzig in Saxony, and I'm sharing them here for others who may be interested. There are some general links to events  in Leipzig itself, and of course plenty of miniatures and wargaming links given the focus of this blog. I know there are more events to come, which I will add as I become aware of them, so check back for updates. Also, please feel free to add more relevant links in the comments section below - thanks!

The Battle of Nations at Leipzig was the largest battle in history up until the 20th century. It involved coalitions of  French, Polish, Italian and Confederation of the Rhine forces on one side, and Russian, Prussian, Austrian and Swedish forces on the other. 600,000 troops were involved, with approximately 100,000 casualties. This was also a battle of ideas and ideals that had been spreading since the French Revolution and would continue to spread afterwards. Both between and within the coalitions involved, cultural justification systems of meritocracy, reason, and autonomy vied with aristocracy, superstition and tyranny.  This Battle of Leipzig Wikipedia link is probably a good place to start as a source of information.

Much of the commemoration information from Leipzig itself is in German, which I don't speak unfortunately. However my partner does and in fact she is a native of Leipzig, or more specifically the town of Markkleeberg, which has been very helpful!


First off then, here is the official website of the commemoration, with information about associated activities occurring in and around Leipzig. It also has an English language version.

Second, below is the newly constructed "Leipzig 1813", 360 degree panorama by Yadegar Asisi. It's beautiful and amazing.  My partner tells me this has been constructed inside an old East German industrial storage tank. There's also a video about the construction of it.

Here's a video on the enormous monument to the Battle of the Nations in Leipzig. It is also the 100th anniversary of its completed construction. There is also this panorama view of the interior that you can scroll around.


The astounding "History in Miniatures" or Geschichte in Miniaturen site containing huge dioramas of battles of the Leipzig campaign. These include many thousands of miniature figurines. There's also a book available of the dioramas. NEW 19.10.2013: The reenactors are starting to arrive in Leipzig, 6000 of them in period costume. Some great pics at the the Spiegal website, especially of the Saxons of course! Another update with gallery here.

Even a model village with buildings of the period is being constructed for the event.

NEW 21.10.2013: The BBC has a story on the activities and a photo gallery with some excellent pictures. The Polish Lancers in the second picture look quite stunning - and good to see the BBC has corrected the caption to state they fought with Napoleon (and were some of his most loyal and determined troops too, as they saw in him their best chance for eventual autonomy from Russia and Prussia).

The BBC also reports some unfortunate remarks from church representatives, who again seem unable to distinguish fantasy from reality, nor deal with complexity, and claim the event glorifies the carnage of war. The statement expressed by one of the actual re-enactment organisers though:

...the re-enactment is dedicated to the "reconciliation" of people, said Michel Kothe, a member of the Battle of the Nations Association which is organising the event. "Contrary to what happened at the time, people from 28 nations will peacefully camp together before the battle," he said.

Exactly - the contrast between Europe now (Nobel Peace Prize 2012) and 100 years ago (World War 1) and 200 years ago (Battle of Nations) is a vital insight into how far humanity has come. I think such events (and wargames too) are one of the most effective ways of making us aware of the historical pattern of decreasing violence - that we should all recognise, be grateful for, and seek to continue. As a psychologist I recommend Steven Pinkers excellent book "The Better Angels of Our Nature: Why Violence Has Declined" for a detailed empirical analysis of this phenomenon. 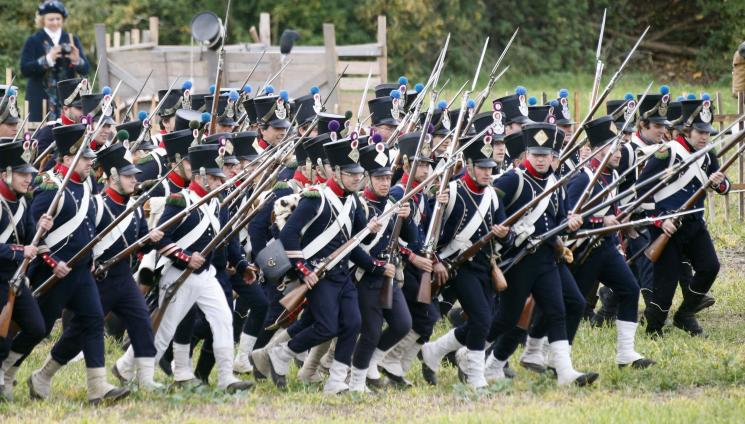 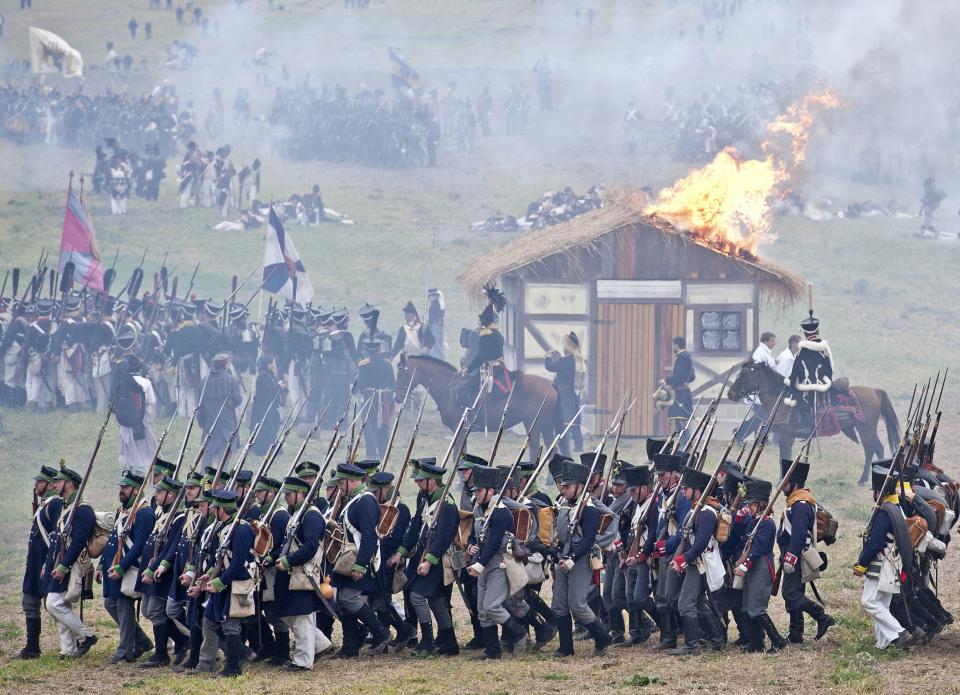 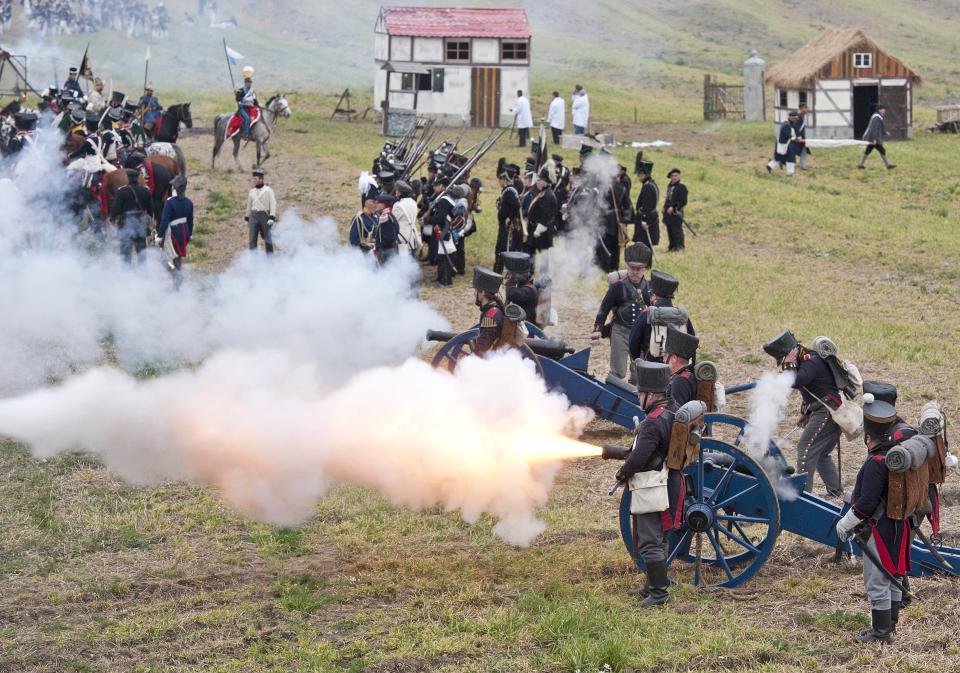 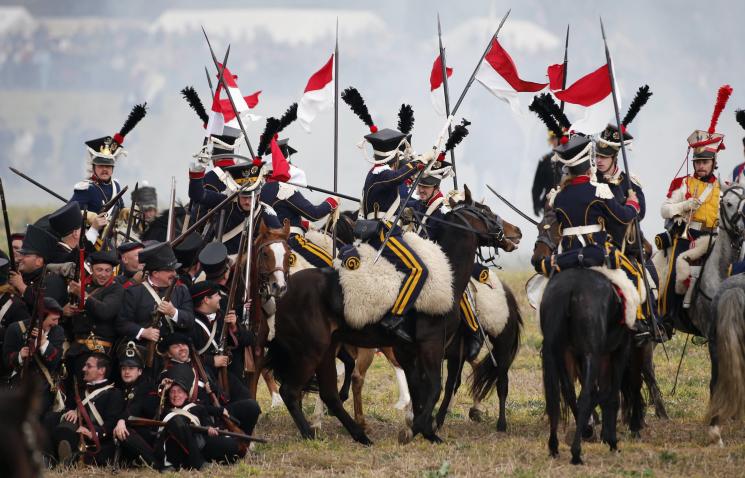 NEW 10.11.2013:  Another two blogs with some fantastic galleries of French and Polish re-enactors. See them here at the Der Letze Mohikaner blog, and Firguren und Geschichten blog respectively.

NEW 27:12.2013: Horse and Musket Blog has some good photos of the Ingolstadt Bavarian Army Museum Battle of Leipzig Diorama.

Firstly here's our own  28mm commemoration refight of the 16th of October 1813 battle, that took place here in New Zealand. Some videos of the event have also being added, and here you can see part 1.

A lovely looking 28mm refight of the Southern Sector on the 16th, by Australian NSW wargamers.

Rafael Pardo's fantastic "Project Leipzig" blog, has an enormous amount of information that I've only just begun to explore, including this impressive list of scenarios.

The Avon Napoleonic Fellowship has a growing list of their Napoleonic bicentennial events including from the Leipzig campaign.

Liphook wargames club has an album of photos of their refight in 28mm scale.

Gonsalvo's blog has refights of the 1813 Battle of Dresden and Battle of Mockern, and more material on the 1813 campaign.

Caliban's blog has a refight in 15mm scale.

RTB at Large's blog has this hypothetical Leipzig refight scenario in 28mm.

The Campaign of Nations blog has a post-armistice 1813 fictitious campaign.

Roll for Reserves blog has a commemorative game based on the Leipzig campaign.

Metro East Gaming Association has a wonderful site with galleries of photos of their huge Leipzig refight.

Glenn's site has a Leipzig refight from Historicon 2014.

The Wargames Holiday Centre in the UK has also been uploading pictures and videos of their 2013 refights of Leipzig campaign. Here's the first  photo gallery. Hopefully they sort out their labelling a little better on some of the latest videos, but you can find more videos here.

Well that's just a start, once again, if you have further relevant links of 200th anniversary commemoration events (or other Leipzig relevant information), then please add them in the comments section below. Thanks!
Posted by Chasseur at 15:02