Voltigeurs. These are more Perry plastics, based to be used as skirmish elements in Lasalle or whatever other rules I use. Like many wargamers before me I found myself cursing the intricacies of the French infantry uniforms. These uniforms are the basic troops so you need thousands! I ended up going with something of a simplification and even that was bad enough. At least some of the Perry line infantry are in great coats... except that I'm fussy and don't like the great coats so I will do them separately as conscripts or something.

Naturally as soon as I'd finished the white I found myself thinking that maybe I should have done some in blue as Legere, but oh well, now I have plenty of Voltigeurs! 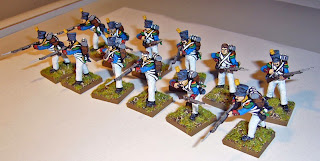 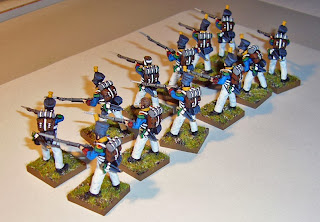 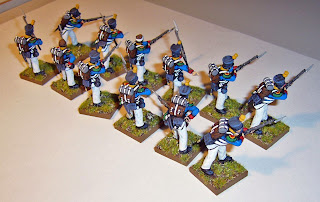 And a photo of all of the voltigeurs I've painted up thus far.

I'm also facing a conundrum with the rest of my line infantry, as they are currently based up 4 to a 50mm square base, as used by some other locals. However the more I look at them, the more I want to do them 6 to a base. This would mean much difficult rebasing and painting many more infantry.... Le Sigh.
Posted by Chasseur at 09:54