More Austrians, some Jagers at last. A relatively recent release from Perry that I had been waiting for since starting the Austrians. Based up as skirmishers with three to a base, and will probably be used as two units most of the time.

These are great sculpts with plenty of action and variety. Six different rank and file, and six different command. Quite a dark uniform with the black webbing, but on the plus side that means it is quick to paint - not that this matters much when you need so few of them... 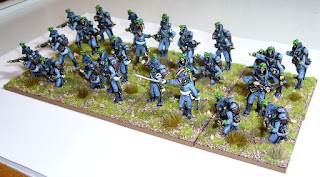 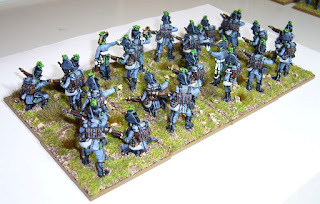 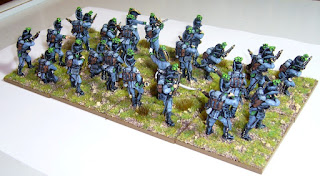 There seems to be some debate as to the shade of grey of the uniform, with a 'Pike Grey' mentioned. In plates and photos you see everything from quite a dark grey to a very light blue grey. I used a medium-light blue-grey. I thought afterwards I could have used something a bit more blue and a bit lighter. But my wife asked why they were blue when she saw them (having seen lots of white coats flowing off the desk with the Austrians), without me having said anything about them, which made up my mind that the grey was blue enough. :) 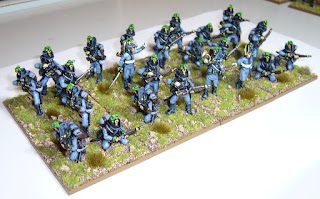 Edit: Thanks to someone on TMP who pointed out that the Officer sashes should be yellow rather than white, they have been corrected!
Posted by Chasseur at 09:20