Saxon Leib Guard Grenadiers - looking fab in their bright red, yellow and white and black bearskin. One of the best looking uniforms of the Napoleonic era I think! These are Black Hussar models once again.

The Saxon Leib Grenadier Guard guarded Napoleon during his stay in Leipzig 1813. Together with the Polish Guard and Velites of Florence and Turin, they formed a new division of the Old Guard at this time. 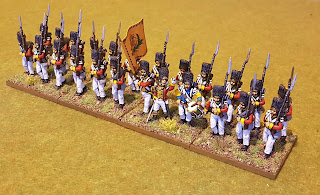 Prior to 1809 many were middle aged and rather too invested in non-military pursuits (i.e. corruption during peacetime duties!) according to Rawkins. Due to this they struggled to muster a single battalion of 500 men, but reforms in 1810 increased the numbers to two battalions.  In 1813 a single battalion of 600 men was raised. 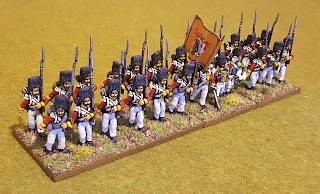 Calot (cloth patch) of bearskin was yellow with a red grenade motif, which I did a stylised  impression of this here. Officers had a red calot with silver grenade. Bearskins were black or sometimes dark brown. 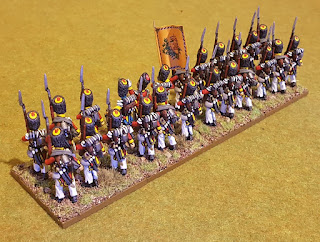 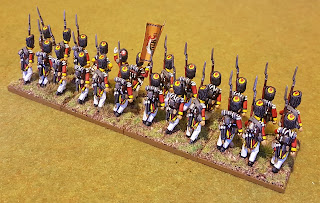 Thanks for looking, with these more specialist units done, now it's time for some Saxon line infantry.
Posted by Chasseur at 08:16