The start of my Saxons with these Zastrow Kuirassiers from Black Hussar Miniatures in Germany. 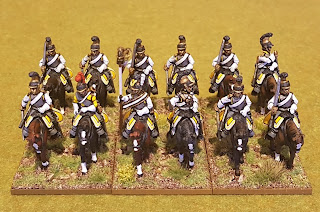 Very lovely models. The Zastrow trooper pack comes with 3 poses, sword up, sword down, and drawing sword (right rear in photo). The drawing sword is nice to have one of, but a bunch of them not so much. I bought an extra pack of troopers (fortunately available without horses), so as to only have one of this variant in the unit. The three horses also have rather limited variety, with two of the poses very similar and only differing in head position. Mixed up this isn't really apparent though. 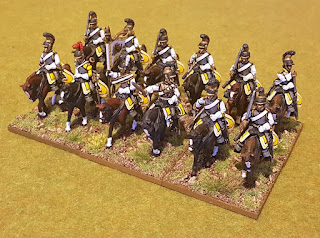 I went with gun metal on the breastplates, which were of course blackened metal, but with light reflection and darkening effect of scale I think it will look right on the wargaming table, as well as conveying the sense of heavy metallic menace you want from Kuirassiers. 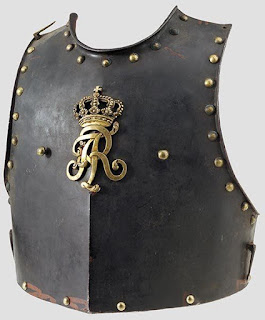 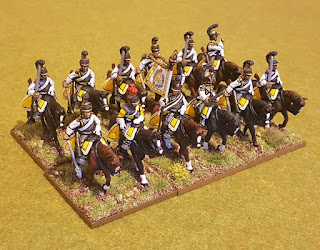 I went with impressionistic saddlecloths rather than trying to pick out the multiple Saxon ciphers on them. As usual I'm going with "bright and colourful" wargaming figures, not museum pieces! Also as can be seen from the yellow/white lines on the edging of the saddlecloth, it's hard to see the distinction between the yellow and white in any case. 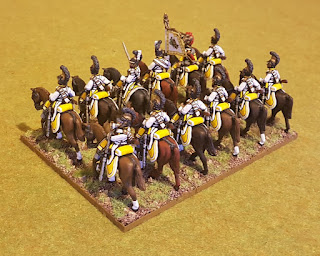 Here's a detail from the Rawkins book "The Royal Saxon Army 1792-1814", (which is excellent value as are all the titles in this series). Good luck for any who want to add the Saxon cipher in the corner! It can be done though, a particularly good example for anyone masochistic enough to try it can be found here. (Thanks Liam, likely ENT surgery teaches greater patience for such details! ;)) 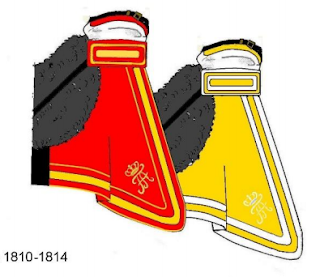 Rear view. No straps molded on the portmanteau (overcoat) across the back of the saddle, but that might be the way they were. 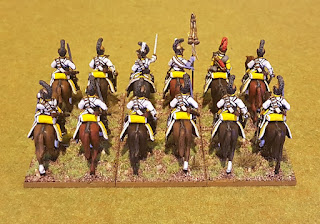 I had also already based these when I found out the trumpeters of Saxon Heavy Cavalry didn't ride grey horses!  I had painted the trumpeter horse grey same as their French allies, but after some indecision about whether it was worth it, I managed to repaint it as a dark brown before varnishing. 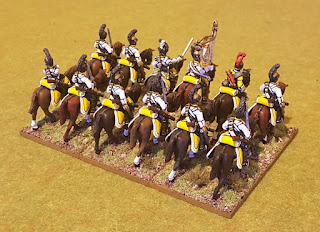 Having done Zastrow, I'm tempted to add the Saxon Leib Kuirassier regiment who are very similar but with red as the dominant colour.  Next up will be some Saxon Chevauleger Light Cavalry though.

I will end up adding a large Saxon contingent. They are pretty important to have for some of the later battles and are very colouful, plus my wife is from Saxony.  While she is not exactly enthusiastic about thousands of Napoleonics filling the house, she has also objected to the absence to date of her native Saxons - given the relentless mustering of all the other kingdoms and principalities!
Posted by Chasseur at 18:01