Windmills - an ingenious method of energy generation pre-fossil fuels, and after for that matter! Windmills like this were a common site in Europe in the 18th and 19th centuries. Being able to reliably mill and then store grain (see the Granary), helped generate an economic energy surplus that fueled important technological and cultural growth - like making fancy hats for the Guards. ;)

This is a modified Sarissa Precision Post Windmill. An MDF kit, which is rather impressively large, and was cheap worldwide postage to New Zealand too. Post windmills were so called because they sat on a turntable post that enabled them to be turned to face the wind in optimal fashion. 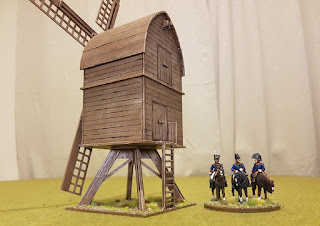 The modifications I made in assembly of this were firstly to triple the thickness of the posts at the base, as these looked a bit anaemic being just 2mm MDF. Really it could do with a central post too  but I decided I could live without that. I also chopped the based size down from 13cm square to 10cm square, to reduce the footprint. 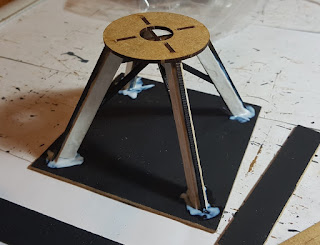 I discarded the rather nice staircase it comes with (but will use this for something else in the future), in favour of a more modest ladder. I made this from scraps of MDF in the kit.  I also cut down the loading crane above the top door to a retracted position. The purpose of this was similar to that of reducing the base size - to cut down the footprint. I want it to be a minor terrain feature, rather than something takes up significant space and gets in the way. Also helps with storage! 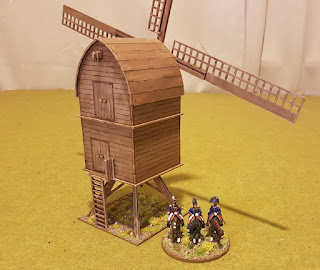 The colouring is a bit dull and monotone, but then they were functional buildings that tended to be pretty plain! I was originally going to add tiles to the roof, but decided to paint it first to see how that looked and thought it was good enough. 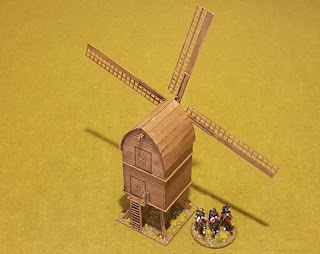 The windmill blades come off for storage and can thus lie flat and take up little space. I magnetised them but this turned out to be unnecessary as they have a socket fit which is pretty secure. 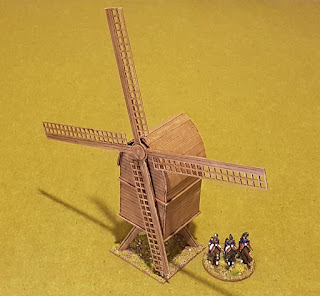 Windmills were iconic features of many Napoleonic battlefields. The tall tower structure, and perhaps ability to be turned, also made them excellent command positions for Generals to get an elevated view of the Battlefield. Army engineers could quickly make a few suitable 'windows' in the upper story if needed...

Below is the Moulin de Valmy, a rebuilt post windmill which is a memorial to the Battle of Valmy in 1792, where Revolutionary French forces defeated the invading Prussians. 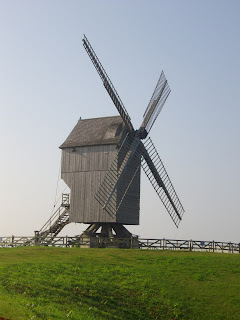 A painting of the battle. 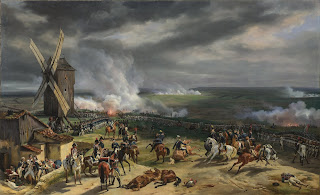 Here's an image of the windmill at the Battle of Leipzig. Napoleon flanked by Murat and Poniatowski. The windmill was used as an observation point by Napoleon. 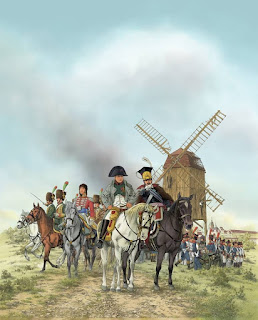 A windmill at Battle of Ligny. 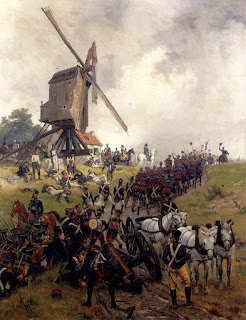 Another post windmill from the present day, with  similar appearance. The Sarissa kit comes with this sort of staircase. 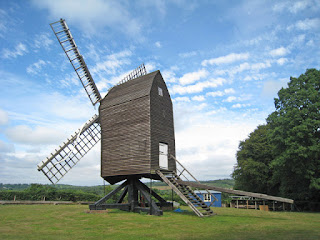