A larger battle played today. Matt was keen for 2000 points so we set up a 12x6 table and went at it. A brief report here, wherein hastily raised reserves perform heroically, Guard artillery dawdles, and both armies go right to the breaking point. 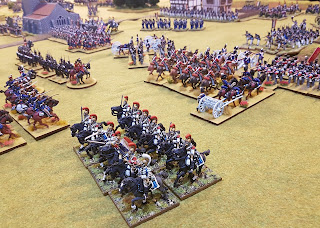 An encounter battle (which is all we seem to roll!), which means a third of each force has to be in reserve. The battlefield has a series of ridges, and a two section strongpoint on the British side (the large monastery upper right), which I expect them to make full use of and so I will ignore it as best I can. I am attacking, and have my dragoons, an Infantry Brigade and Reserve Artillery off table.  British have two Infantry and three Cavalry Brigades in reserve. 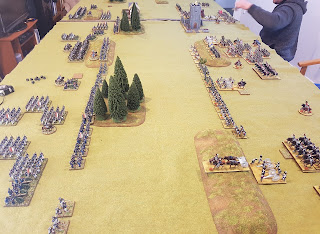 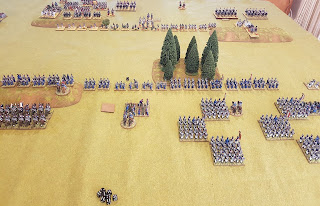 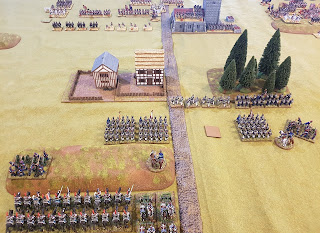 My plan from the start was to hold on the right, and make a general attack elsewhere with my strong skirmish screen and artillery, and then commit most of my Reserve Cavalry plus the Reserve Artillery either on the far left or centre, once British dispositions and effects of initial attacks were apparent.
My Dragoons arrive on the far left. 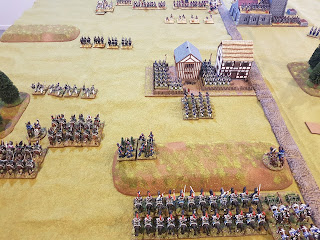 And more Dragoons on the right to prevent this flank being overwhelmed, and to give them the option of joining the attack in the centre. 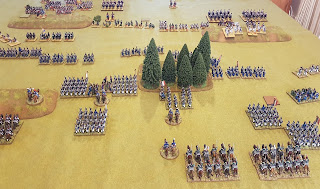 My skirmishers and artillery manage some very effective fire against the enemy artillery, taking out some exposed batteries early on. 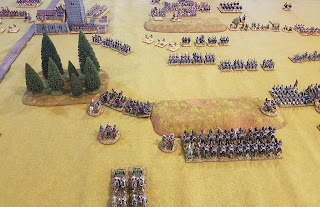 I commit Cuirassiers in the centre. 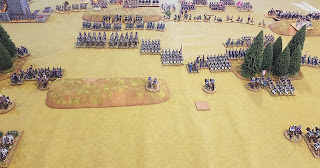 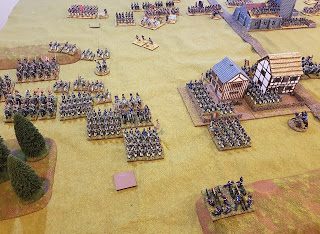 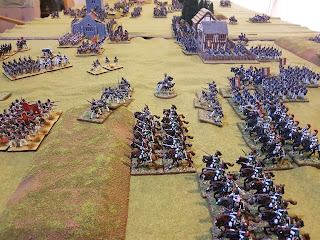 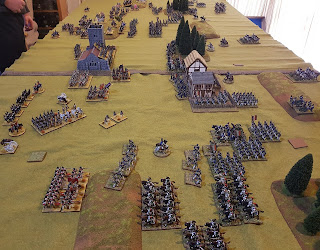 In the centre the Cuirassiers charge. Here they meet a newly raised unit of veteran Dragoons, which routs one Cuirassier unit and forces the other back!
When I say newly raised, Matt said it arrived in the mail yesterday at 10am, was assembled by 12, mostly painted by the time he went to work at 5, finished in a couple of hours after he came back from work after midnight... can you match such dedication? 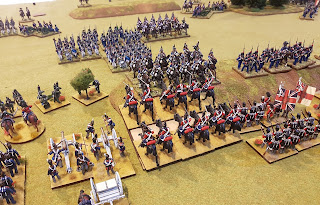 On my right, yet more British Dragoons force back my own Dragoons... 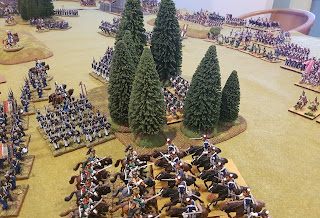 And swing into the rear and rout a French column behind the forest, where it had retired to rally safely. Work done the Dragoons retire blown. 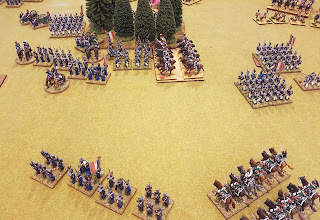 On the left, my Reserve Guard Artillery has arrived, but then it fails another command roll, delaying its advance yet another turn.  A last minute decision to save points on their General was not a good move!

I attack here anyway, my Dragoons force back enemy Dragoons, but are then driven back in turn by Light Cavalry. 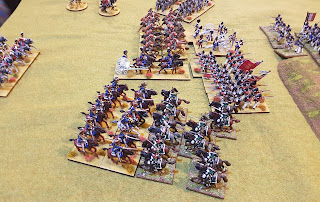 The pursuing  British Light Cavalry are then hit and forced back by Carabiniers, who pursue and rout the Scots Greys.

A British heavy cavalry charge catches an attack column out of square to the immediate left of the ridge, but the column manages to fight them off and lives... 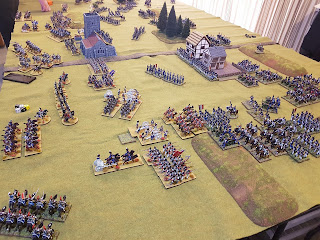 A tree, which is about as much use to me right now as this stalled Reserve Guard Artillery.  Over one sixth of my points doing nothing. No I'm not bitter.

Under way finally, and horse artillery mounts the crest to blast the British Guards who have been trapped in square by my cavalry. Carabiniers in foreground retiring after taking fire. 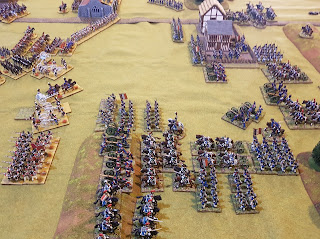 On the right, skirmish screens are largely expended and lines engaged.  I am a little worried about a lack of reserves here (as in zero of consequence)... but the enemy artillery has been almost completely silenced at least, and most of the enemy cavalry is as exhausted as my own. 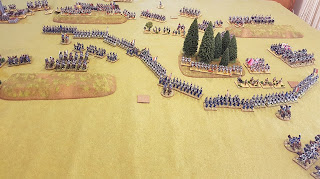 Just a single blown cuirassier unit as backup in the centre...

My artillery finally goes into action, a total of six batteries on this left flank ready to blast the enemy to dust. 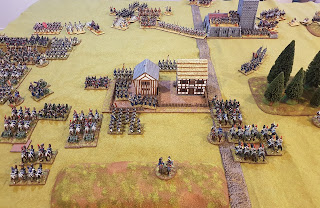 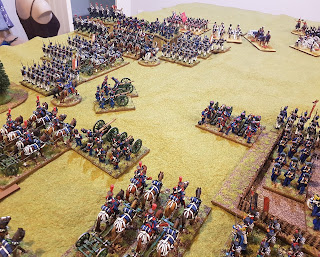 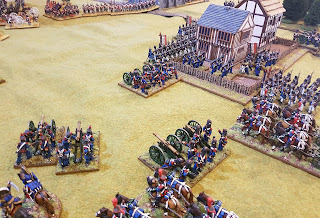 The British attack my right, but a first cavalry and infantry charge are repelled. My line is taking  heavy losses from musketry though. 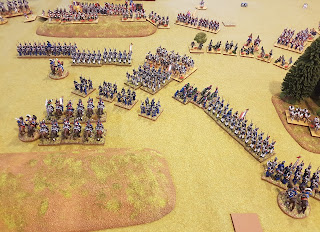 On the left, the British Guard square is absolutely wrecked by cannister, but refuses to break.  British Cavalry catches a French infantry line and routs them. A French Line and Battery near the centre are lost to musketry volleys and skirmish fire respectively. 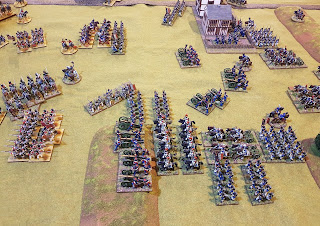 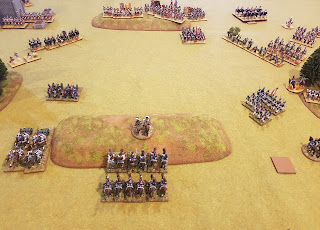 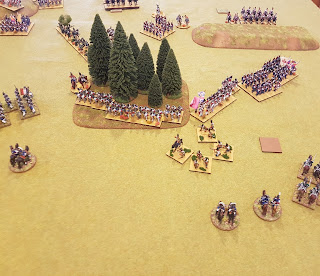 On the left the British are also about the break under the hammer of the Guard Artillery, but too late - the French Army morale has broken and the day is lost! 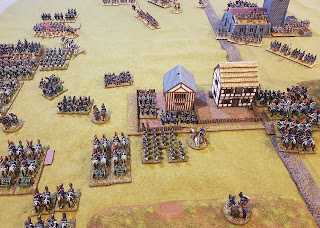 Well what a turn around. At the start of the British turn eight, they had lost 11 units, and the French 5. By the end of the turn the French had lost another 11(!) units in a single round, for a total of 16 units lost (over a third of their total). With all my expensive toys I knew I would be short of infantry reserves and so it proved. Unfortunately the two turn delay with the Guard Reserve Artillery cost me heavily here - serves me right for trying to economise on command assets in favour of bigger guns! The Guard Reserve Artillery should of course have excellent command, so will remember that next time I use them!
Posted by Chasseur at 22:26