Here is the start of the battle, with Allied forces steaming ahead towards the enemy positions, with Ion's Russians being characteristically aggressive... 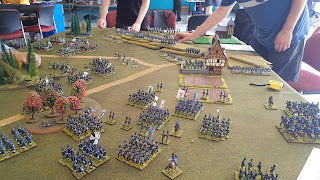 Rules were 321 Fast Play Napoleonic Rules again, with some 5.1 amendments tweaking a few things (will release this shortly after more testing - just trying to decide on cossack rule amendments at the moment!). Here's a shot of French dispositions at start of the game. From the venerable Charles Grant, scenario 16 modifed to involve more troops. I believe this is currently out of production(?), but his Programmed Wargames Scenarios book has been re-released and is available from Cavalier Books. I must get a copy once my finances are improved. 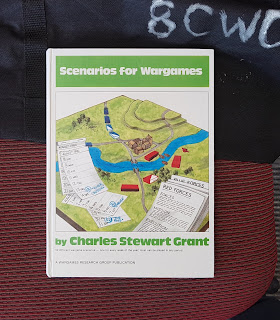 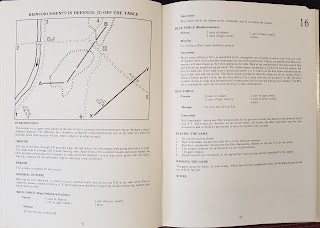 French await the onslaught. Stephen was commanding the left flank and myself the right. 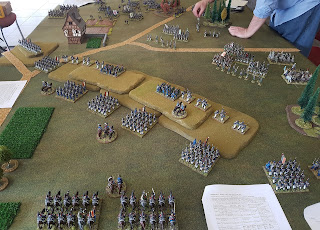 Russians storm towards the ridge, dismissing prepratory bombardment as unnecessary... 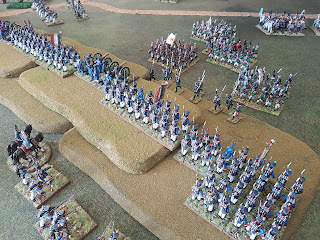 Their charge is thrown back with the heavy losses, excepting for Pavlov Grenadiers who overrun the artillery battery smashing through the line, and then forming square to fend off counterattacking Cuirassiers! Prussian Landwehr storms the hamlet in front of the ridge, routing the defenders.
But Guard infantry arrive to reinforce the line on the left, rushing down the road in march column, while two battalions are diverted to the right flank. 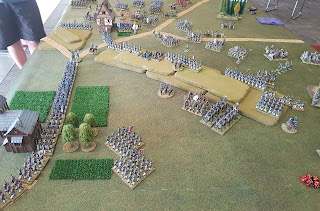 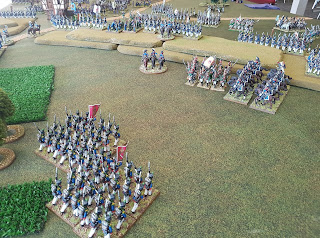 The Middle Guard relieve the position on the ridge just before it is overrrun, and rout two Prussian attacks, and throw back a third.

However, on the extreme left the other Fresh Middle Guard attack column is ignominiously thrown back by a highly disordered Landwher unit (which had already suffered 3/4 disorder hits)!
Note: Odds of this interaction for any Landwehr hero hoping to rely on this in the future - about 2% chance of throwing back the Middle Guard and 95% chance of Landwehre just routing instantly! ;) 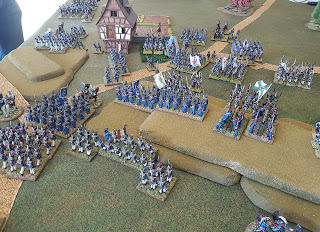 Russian Cuirassiers catch a French battalion in line and rout it.

And the Russians take the ridge and valiantly try to hold it as reinforcements arrive.  French and Russian Cavalry exhaust each other. The Pavlov Grenadier square refuses to break despite steady volleys from the Young Guard in their direction... 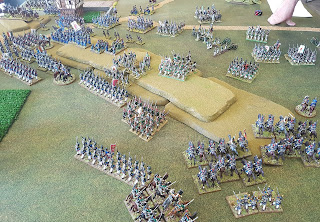 But turn seven the Russian attack is finally shattered, and the Prussians have also suffered signficant casualties.  12/34 units lost to the Prussians/Russians is 1/3 of their force lost, while the French have lost 6/25 units. 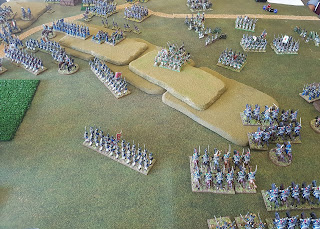 Middle Guard still holding the ridge on the left. 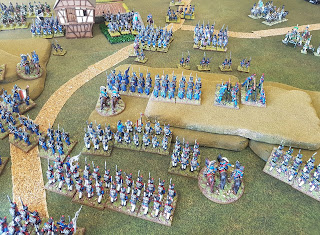 A brutal battle where musketry and artillery was largely dispensed with by the attackers in favour of the bayonet and elan, though at high cost!
Good to be back at the club playing Napoleonics again after some time. A lot of talk and a meal and drinks made for a pleasant day out.  Many thanks to Paul for organising, and to Ion and Stephen for partaking :)
Posted by Chasseur at 22:03