Having just painted up a unit of Gardes d'Honneur, Matt suggested using all the French Guard Cavalry in a game, and I thought I would give it a try. However, the points for all the Guard Cavalry was such a large amount (600 points), that I thought I would expand the numbers by using a load of conscript infantry (and not overly patriotic conscripts, but the less willing kind so I could afford more of them!) The idea of the Elite Guard Cavalry riding to the rescue of conscripts also appealed so off we went with a 1000 point game against his Russian Guard. 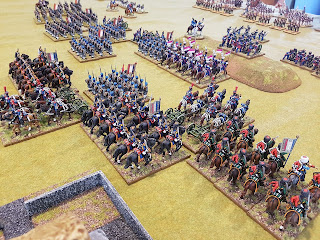 We once again rolled up an Encounter battle (1/3 of forces in reserve, arriving from turn 1 for attacker which was me, and turn 3 for defender). Terrain turned out to be minimal, just a ridge on the right and some woods and a town on the left flank. 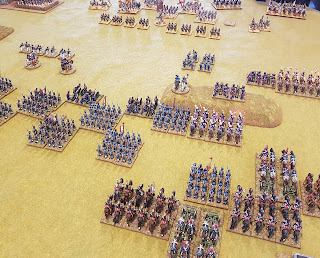 French concentrating for attack on the right.

Everything concentrated on one flank! 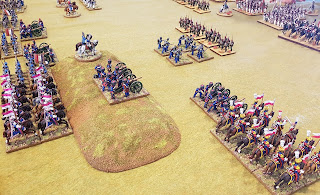 Red Lancers retire and Chasseurs take their place as Russian Guard Cuirassiers move to oppose (Lance bonus is lost against Cuirass in rules used). Grenadiers and Empress Dragoons support the Chasseurs ready to deal with Cuirassiers if Chasseurs are forced to retire (or heaven forbid - broken!). 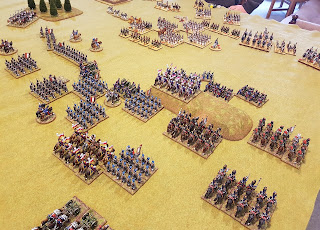 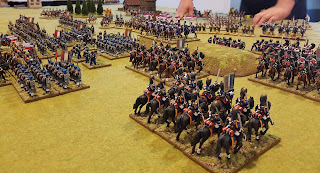 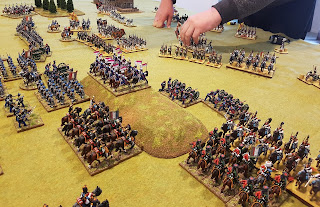 In a two round combat, the Chasseurs inflict three disorder on the Chevaliers, and take two, and so heroically beat off the Russian heavies despite being at a disadvantage here. The Chevaliers retire. 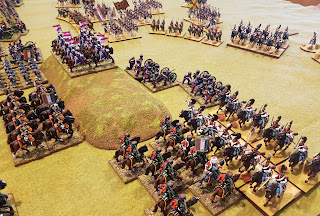 On comes the good French infantry reserves (meaning regular rather than raw infantry!). I throw them all in to try and crush the Russian right. 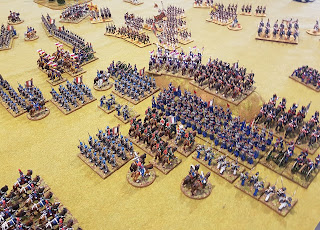 Meanwhile on my left, the Raw French Line are being hard pressed, the first unit falls back almost broken after being bombarded by artillery, it's place taken by a reserve. Garde's d'Honneur charge Russian infantry to force them into square and break up their attack. 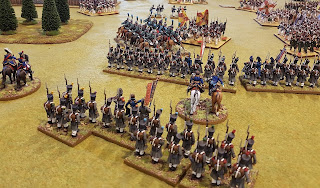 And my Lancers prevent the assault by any of the other Russian columns. 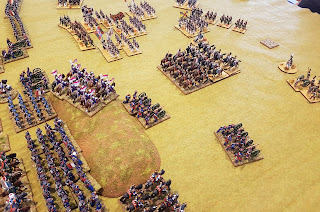 Grenadiers run down an exposed Russian Horse Battery without losing order (its withdrawal prevented by the Dragoons to its rear). I also exhaust one of my disordered Guard Horse Artillery batteries trying to bombard the Chevaliers though and it is removed. 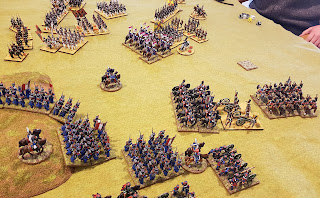 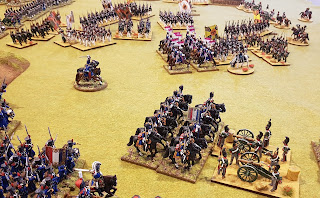 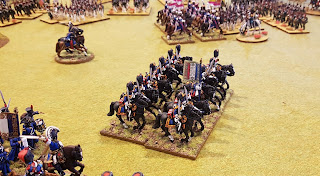 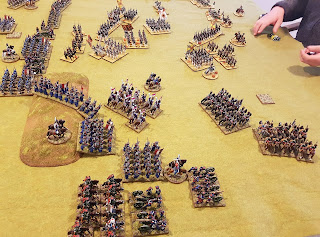 Over on the left the Russians break through the conscripts, as my cavalry has had to ride over to my left to intercept incoming Russian Lancers. 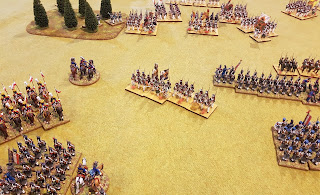 And the Chevalier Guard make up for their poor perfomance against the Chasseurs, by forcing back both the Grenadiers and Empress Dragoons, despite being in a state of much exhaustion themselves! 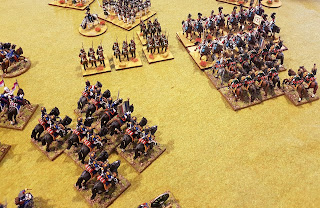 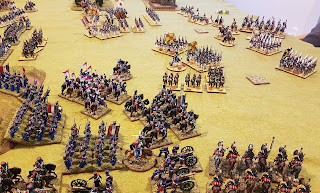 My cavalry is also becoming increasingly fatigued, but I push the attack again with both infantry and artillery support against the Russian Guard infantry (including some reinforcements that have just arrived - note two Prussian Guard units subbing in here as Matt ran out of Russians to paint).  The Grenadiers inflict two disorder against a square but do not break it and my cavalry retires but stays close enough to trap the infantry in squares. 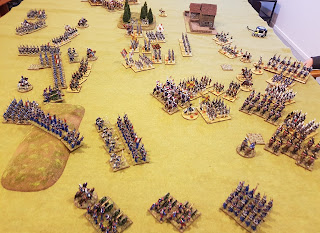 Over on the left, the opposing Light cavalry units dance around each other, neither side really wanting to commit to combat! 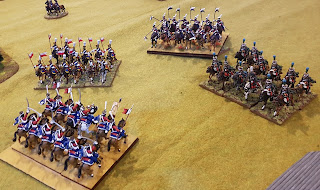 My Conscripts are hard pressed, and the first brigade breaks under the Russian attack. A fresh Conscript unit routs, while a highly disordered and thus almost useless Conscript unit decides to stay! 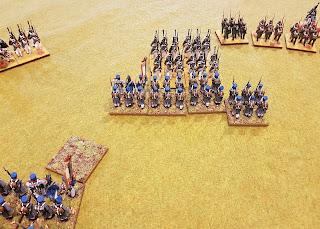 ...but charging on they are broken by the next Conscript unit they run into! 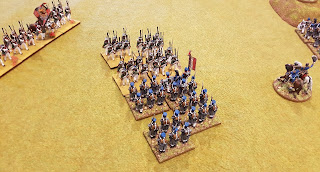 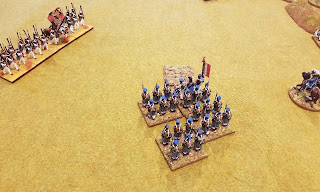 Over on the right, multiple Russian infantry units finally break under the sustained assault of combined cavalry, artillery and infantry attack, and the Russian Army also breaks. 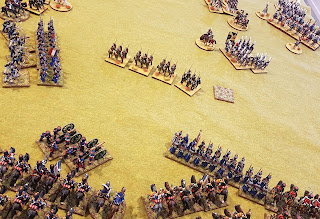 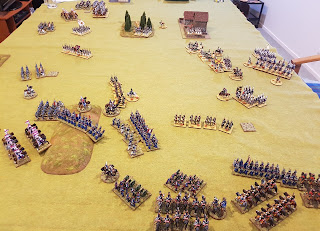 A hard contest, with the superior French numbers paying off against the smaller but overall better quality Russian army.  Conscripts are a risky venture, able to boost numbers and the army break point and hold the line briefly. But also able to lose those numbers and open a hole in your line just as easily!

The French Guard Cavalry didn't lose a single unit despite repeated action, though it was very much fatigued by the end of the battle.  They were also very busy trying to save the conscripts in the centre, prevent the Russian Lancer attack on the left, as well as press the main attack on the right! I ended up losing command control of the lights on one flank or the other due to them being so dispersed, despite their extra range for command. But overall an excellent preformance for this first outing of all the Guard Cavalry.

This game also took a relatively long time to play (about 4 hours I think), due to both of us agonising on the critical decisions and hard choices! 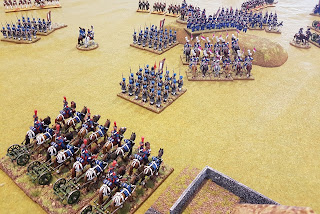