Following up my "How I Paint" post, here is a post on basing. Fortunately this won't be nearly as long or detailed!

First off the bases. I am using 3mm wooden MDF bases that I bought off "Dopey Dog Laser Engraving" here in New Zealand. Very fast and cheap, and I have typically received extras with orders. They are also happy to make bases to different sizes and specifications. The other company I have used for MDF bases is "Warbases" in the UK, who also provided good service. I've also used "Litko" from the United States, but found their service rather slow and expensive in comparison.

I base Cavalry and Infantry on 50mm square bases, and Artillery on 50x75mm or 50x 100mm bases. The aim is that they might then be useable for a range of rules, and it is also a common basing standard for Napoleonics here in New Zealand.

The basing material I use at present for my Napoleonics is all from Army Painter. I chose this because much of it seems comparable to existing ranges out there, and I want to ensure standardisation. Army Painter seems to have been around for a few years now, and likely to be around for a while too, so I imagine I'll be able to keep getting the same material for years into the future.

As an alternative, Woodland Scenics has products which I have also used a lot of, and they are a long established quality company. My main basing material for my 15mm and 6mm figures is a 50/50 mix of their two Blended Turf mixes - Green Blend and Earth Blend. I have also used this same mix to flock my two wargaming tables. I also mix in a bit of the "Coarse Yellow Grass" to break up the garden lawn look with some low lying shrubs or tussock. Their ballast range is good for a basing material under the grass and turf if desired, with the Buff and Brown Ballast being useful in this regard.

Here then is a stack of bases and figures ready to go... 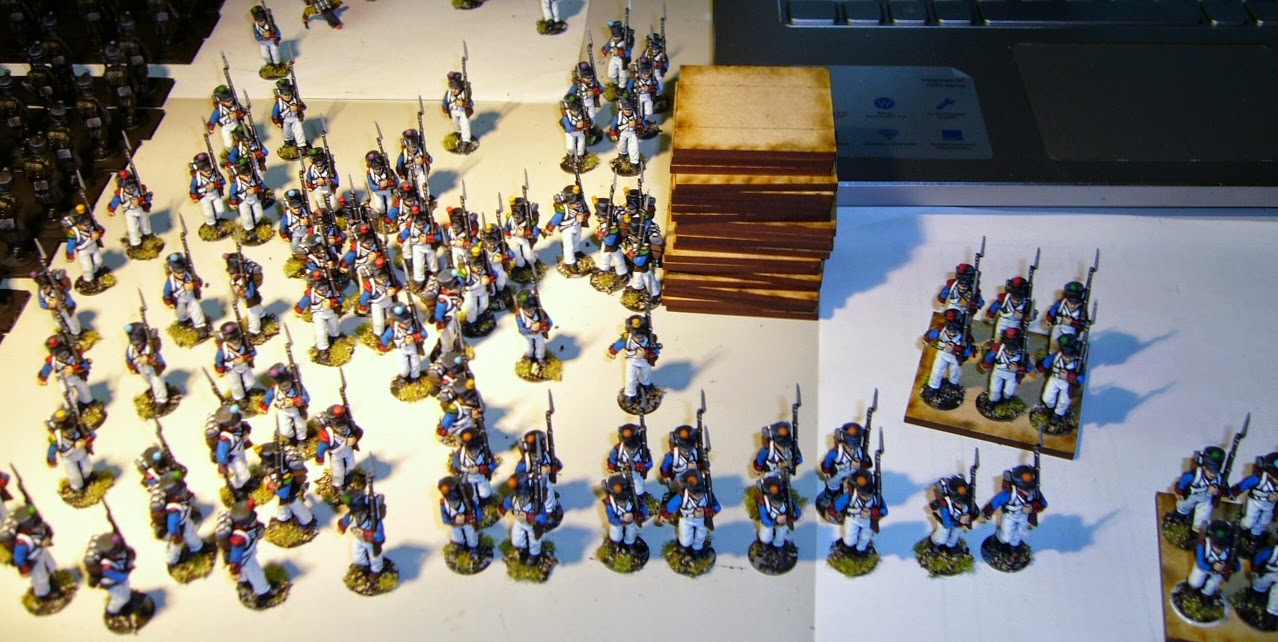 I rule a couple of parallel lines, 1.25 cm from the base edge from the front and back of the base, thus ensuring that multiple ranks will be evenly spaced when the bases are in column. I roughly centre the figure bases onto this line, gluing them on with with PVA (white wood glue).

My existing French infantry (128 of them) were based four to a base, but I decided to rebase six to base. It looks far better, though of course it is a lot more work to get the same number of units! Here's the first six regiments based up. As many were glued on with PVA to their old bases rebasing was not too painful an exercise (though still something to avoid if you can help it!).

After the glue is dry, I paint the top of the base matt black using an old 5-6 size brush. 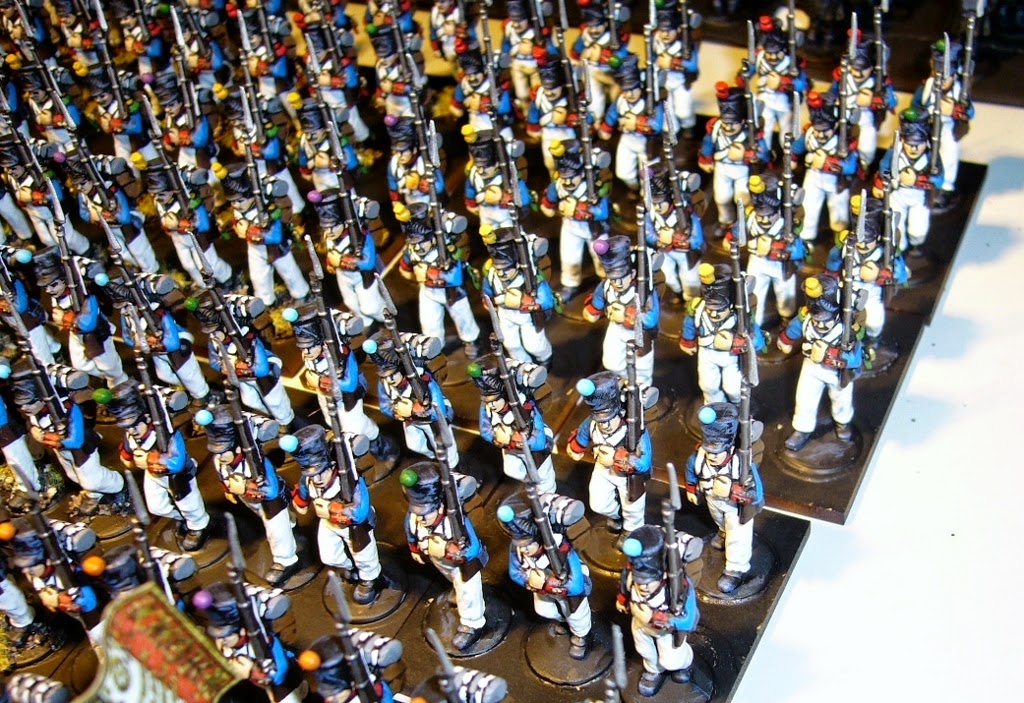 Then I paint the top of the base including the figure bases with PVA glue using an old size 3 brush, and apply basing material. The material I'm using is "Army Painter Black Battleground", (Edit - I'm now using 'Army Painter Brown Battleground' as described below as it saves a step and looks fine!), together with a few larger pieces of "Army Painter Battlefield Rocks" to add a bit more texture. I scatter a few of the rocks on top, and then dip the whole base into the Black Battleground material.

Once this has dried (I typically wait a couple of hours or overnight), I scrub the top of the base with an old toothbrush to remove excess material. I do this over a large container so that the material which falls off can be tipped back into the supply and reused. 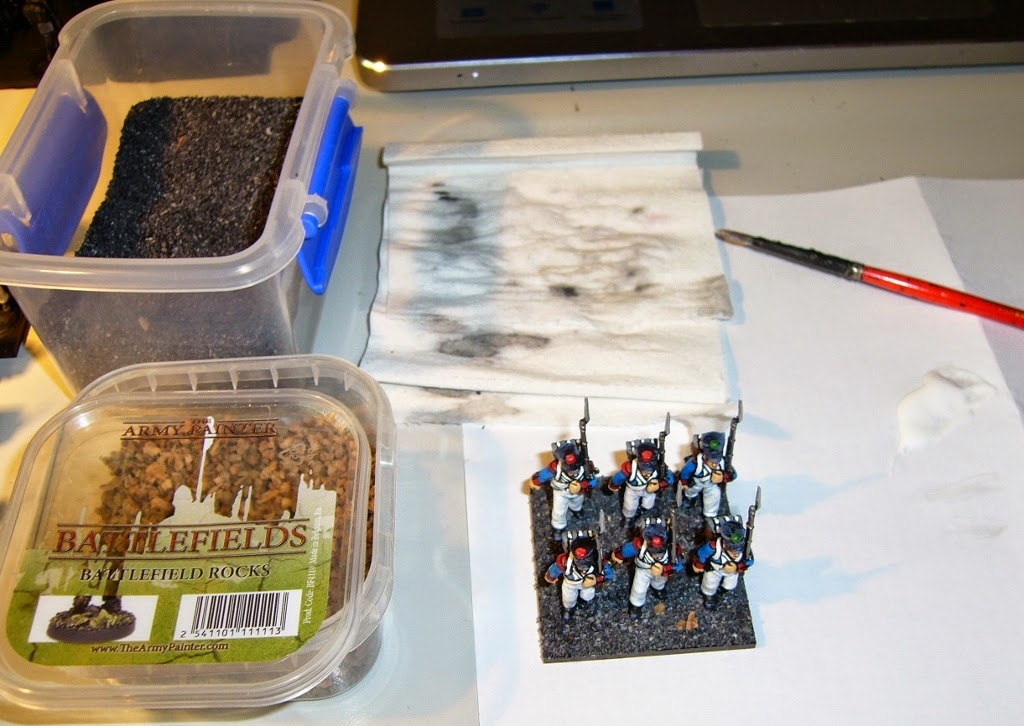 I then paint the few pieces of rock black, before drybrushing the top of the base with an earth colour. This is done reasonably quickly again, but taking some care not to splash it all over the figures shoes. I use an old 3 or 4 size brush. 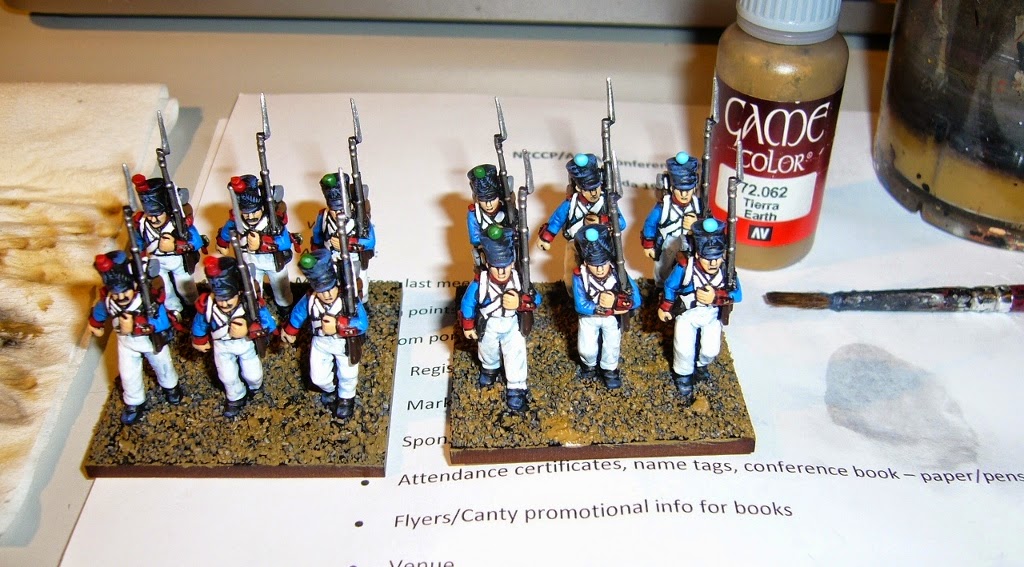 Here's a picture without the flash. 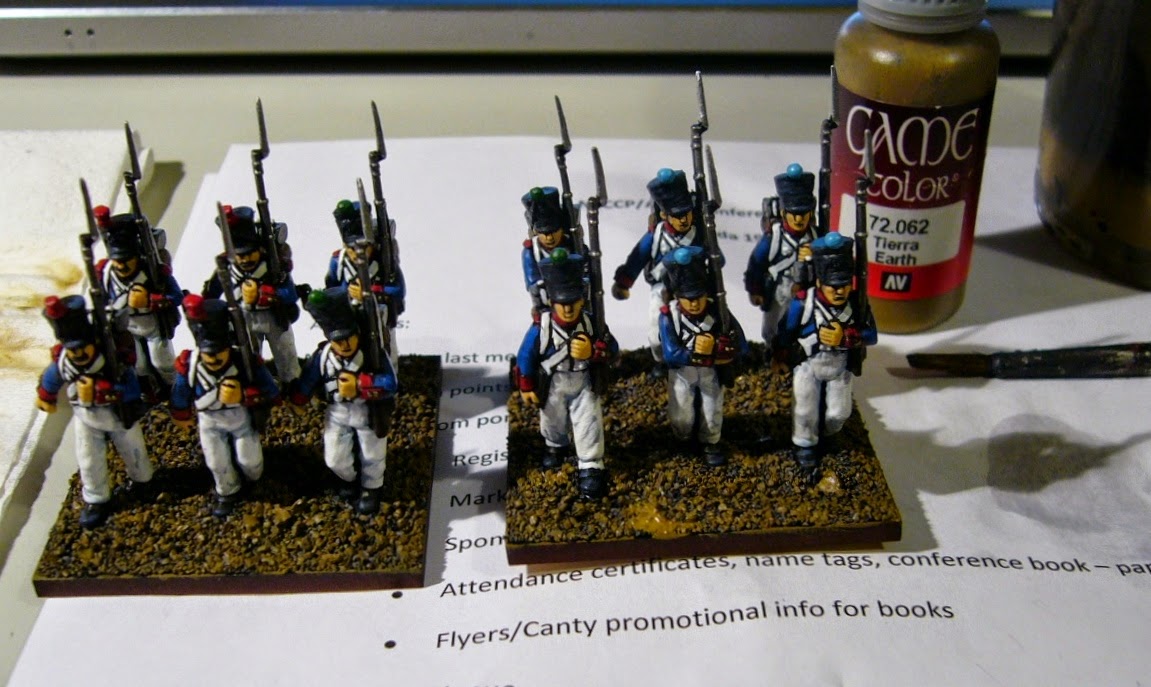 As an entirely acceptable alternative to basing with black then painting it brown, I could have just used "Army Painter Brown Battleground" instead. This would save a step and I have in fact done this with my 15mm figures. It looks slightly less good to my eyes, but not enough to justify the extra time I take doing the black then drybrushed brown. However, I started doing my French the way I show here, so will persist for the sake of consistency until the army is completed (Ha! As if a Napoleonic Army is ever completed...)

I then drybrush the top of the base with a bone or sand colour, to give the texture some more depth. If using the Brown Battleground basing material I still do the same. I then paint the edges of the base with the earth coloured paint, typically doing two coats to ensure an even colour. 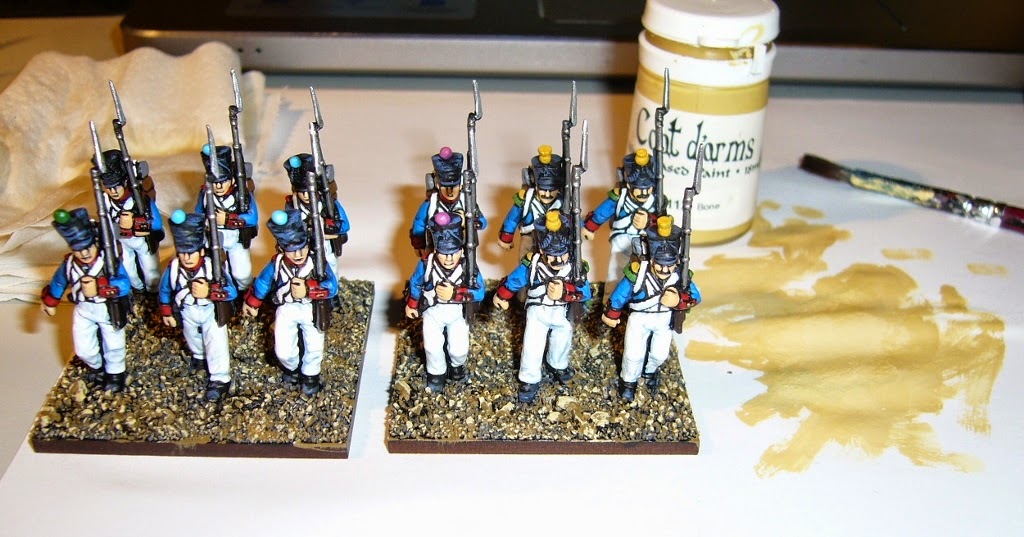 Once again, showing without the camera flash. 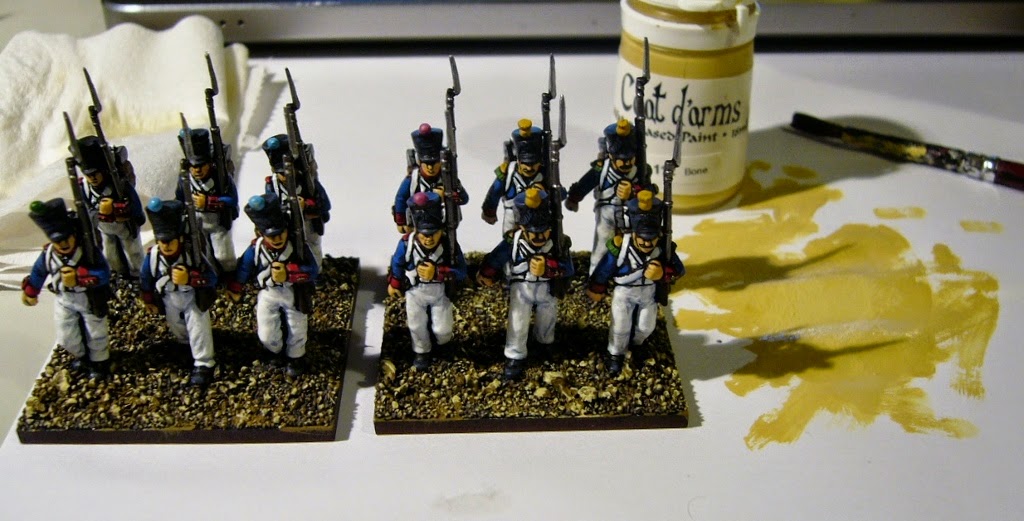 The next step is the flock. I'm using "Army Painter Field Grass". I roughly splodge on patches of PVA glue with a size 3 or 4 brush, leaving the earth colour showing through in places, and then dipping the entire base into the flock. I find that I tend to have to press clumps of this stuff on a bit more with my fingers or tweezers rather than just dip it into the flock, as the material tends to stick together. Once it is dry (another hour or two), I once again scrub the base with an old toothbrush to remove excess material, collecting the excess again for reuse as described for the earlier basing material. 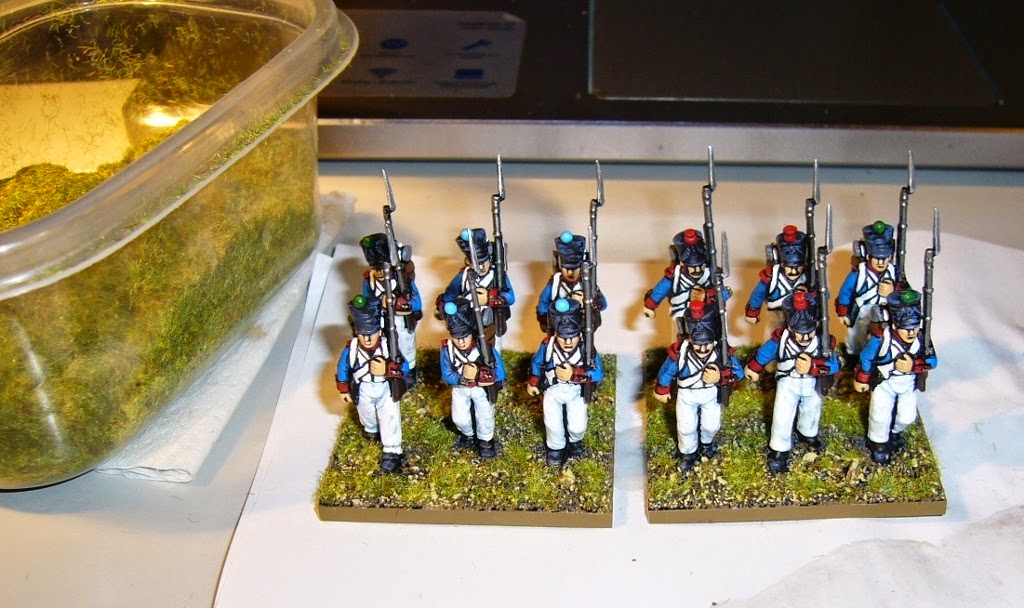 I then apply 2-4 clumps of various tuft material to the base, glued on again with PVA and placed with a pair of tweezers. I use a mix of "Army Painter Highland Tuft", "Army Painter Winter Tuft", and "Army Painter Meadow Flowers". Note that I've got the packets mixed up in the photo below, that colour shown is actually the winter tuft not the highland tuft! 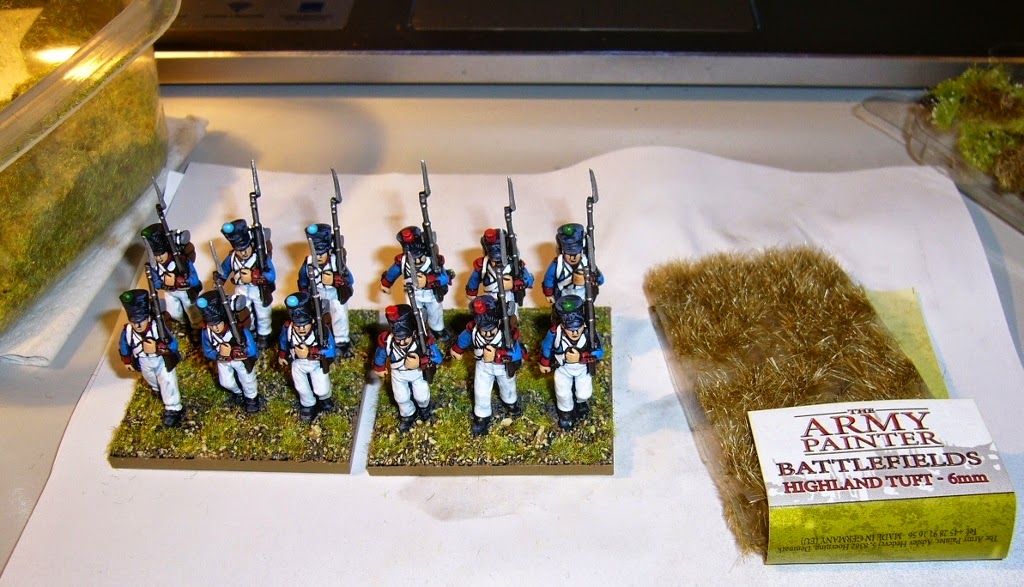 And there we have it, unit done! I will take a few more shots of a Line Infantry unit from different angles for a future post to show them in more detail.

Email ThisBlogThis!Share to TwitterShare to FacebookShare to Pinterest
Labels: 28mm, Napoleonic, Painting, Painting (How I Base)