Here's another Michael Hopper test scenario played a couple of weeks ago. See the previous Battlereport of Santarem for more details of his upcoming Peninsula War scenario books.

This is an unusual scenario, in that a largely inferior French force (except for its artillery dominance) is  attacking a fortified British force.  The British are behind a low wall, in a valley with impassable hills to each flank.  The British position also has many fields, orchard trees, and low walls etc, with a series of enclosures that make it unsuitable for cavalry operation.

Historically the French advanced and did a couple of brief probing attacks on the flanks, and then called the whole affair off, which seems wise. But let's see what happens if they are not so wise...

The game was played with 321 Fast Play Napoleonic Rules. 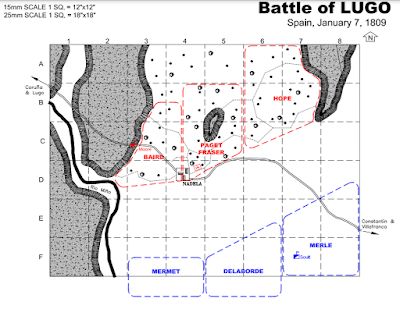 So here is the set up. Given the above deployment instructions, the French have most of their forces on their right, but the left is where they really want to be to gain the victory points...

The British Guards and other veterans defend the critical point, as well as all the British Artillery.

The right is also strongly defended (some Portugese and even some Russians subbing in for rear British units). Hill's brigade is off table in reserve in the centre

Checker board of French units on the right. Many Legere. 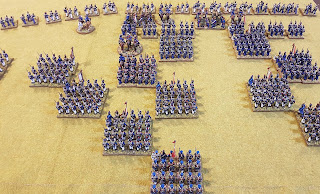 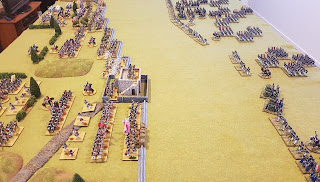 Opening moves and both sides advance skirmish screens, and a battle between these begins.
The scenario notes state that French artillery can only fire in support of its "divisional attacks",  which may mean something in the (Shako?) rules the scenario is designed for. However to give the French more of a chance and produce an interesting game, we allow the French artillery to act as it will. I mass fire against the British artillery position, which has 5 guns to the 8 French. 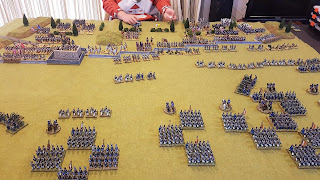 About six of the ten turns are spent in this skirmish and artillery duel. The French get the upper hand in both due to their superior numbers with skirmishers, and luck with artillery (French have more artillery but British artillery is in cover so it was quite an even contest in the rules used). 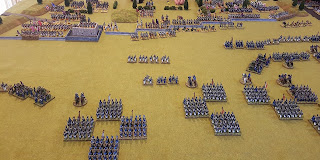 This at least helps prepare the way for the French assault, and the French guns now target Nadela and the defenders in this general area, aiming to soften it up for the assault columns to head in. The rest of the British force will be pinned by the remaining French forces. 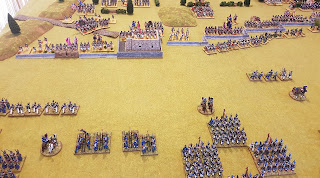 Guards and veteran Highlanders defend Nadela and the road. Another British infanty unit takes up the position of the silenced British Guns.

In move the assault columns towards the waiting British. 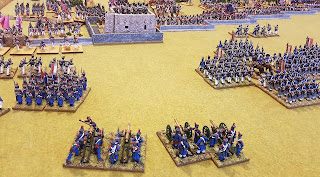 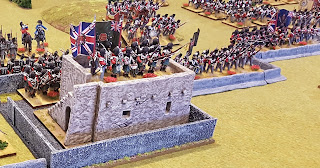 The French are repelled in disorder. A British line unit jumps the wall and charges the disordered French columns... 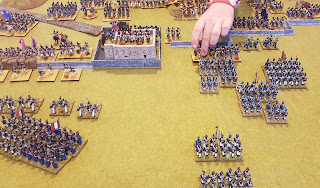 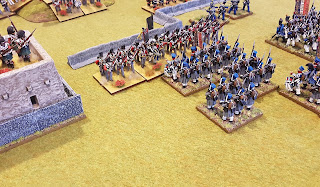 ...and charging on and forcing a second column to retreat in disorder. 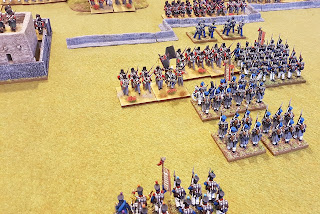 And with that it is turn 10 and the game is over.  British hold their positions and are victorious (with one point for holding Nadela), and the French retire. 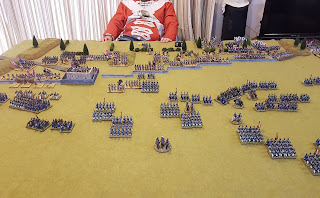 Well I don't think there is much to say about this scenario, it is a very tough proposition for the French I think! I did forget to add my Sapper companies in the final attack (oops!). Under rules used they  reroll their attack rolls (to hit and to disorder) when assaulting or defending obstacles which could certainly help in the situation at Nadela. I did these rolls after the game just to check if it would have made a difference and it would not have done so in this refight. However, it does give the French a bit more clout in the critical assaults in this area, and the possibility of a somewhat earlier attack than I attempted is worth considering.
This scenario seems to come down to the French trying to weaken the area around Nadela as much as possible, before sending in an attack to take this area, and hoping they hold it against the British counterattack in the last turn or two. So it is rather limited as a game I think, but if you want completeness of Peninsula actions this is another one to add to the repertoire! Michael Hopper notes there was also some cavalry on both sides, but given the British are entirely behind an obstacle cavalry doesn't have much of a role here without some house rules for breaking down obstacles he thinks. Even then it is difficult to see it achieving much!
Posted by Chasseur at 17:14