Another playtest of a scenario from Michael Hopper's upcoming Peninsula books (see last battlereport for details of these books, here). This time the French defending the town of Santarem in 1810, and the British and Portugese attempting to capture it across some difficult terrain. 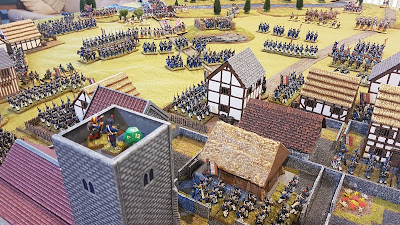 I won't detail the full scenario, but will highlight the main points. The French hold the town of Santarem, and the British/Portugese force is attempting to get troops into at least part of it. The town walls are in disrepair but still offer a minor defensive bonus. Neither side wants to take significantly higher casualties than the other side.

In terms of other terrain, it had rained heavily for several days beforehand, and the ground near ther river was very muddy.  The scenario special rules proposed for the mud is a very tough one - no cavalry or artillery movement in it, formed infantry can only move on a "1" on a D6, and skirmishers move at half speed. All the Southern attackers have to move on through this mud, or across the one narrow causeway in sector D3. Additionally there is chance of heavy rain (on a "1" on a D6 each turn), which will mean no shooting for that turn. The British Light Division is present to help attack through the mud and historically Craufurd was keen to press the attack, but Wellington called it off.  This scenario then represents a "what if" he had continued with the attack.

The scenario specified 12 turns, but using 321 Fast Play Napoleonic Rules, we made this 10 turns.

Both Army Commanders were rated Strategists and all Generals rated as Competent. 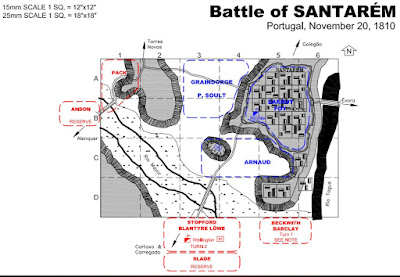 Here's the setup. Looking towards the south of the table. Please excuse the architecture as I don't have Peninsula style buildings (yet).

Looking towards the west. (Matt commanding the British - note clothing choice from here!) 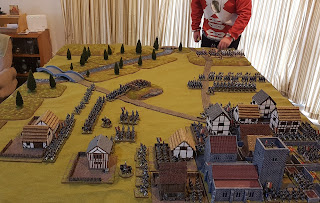 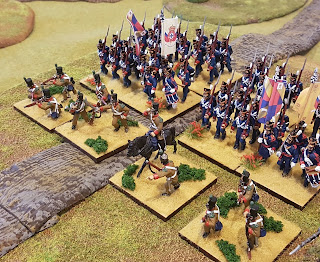 The British Guards attempt to force passage from the south across the causeway. The French of Arnaud's Brigade try to contest this and keep the British stuck in the mud. The first charge is thrown back despite the Guards being at an advantage against the disordered French line  (which had taken rifle fire). The French struggle to get reinforcements up to help their shaky defenders at the causeway. 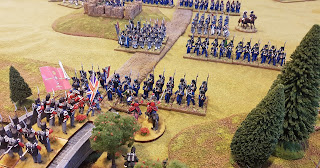 Eventually the British secure a bridgehead, and begin to move up reinforcements. Skirmishers plod through the mud, and even the formed Highlanders manage some forward motion. 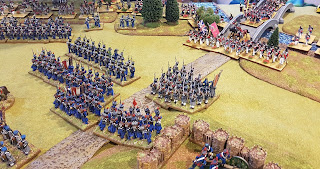 To the north and west of the causeway, the battle between Pack's Portugese and the French involves some back and forth as swarms of skirmishers seek to gain an advantage. Charges of French Light Cavalry slow the Portugese advance but are repelled by squares.

View from the south. 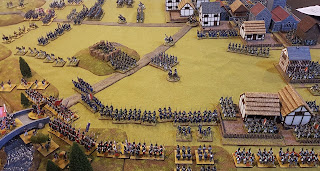 A combination of infantry and cavalry charges during a downpour of rain on turn 6, inflicts heavy casualties on Pack's Portugese Brigade, and they lose two Battalions. 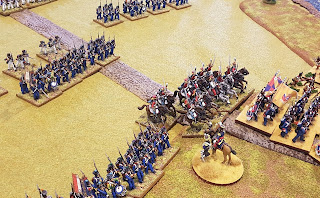 Meanwhile the British now have a firing line established and are inflicting heavy losses on both Arnaud's Brigade and some units of  Foy's Brigade who have been moved up to support them.

To the west, just in time to save the disintegrating Portugese of Pack's Brigade, Slade's Cavalry Brigade  arrrives, with heavy dragoons leading the way. 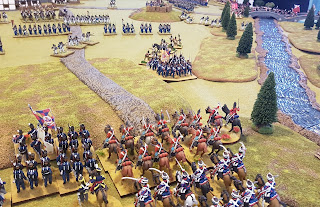 The French guarding this western approach, fall back towards Santarem, not wishing to tangle with the British cavalry. 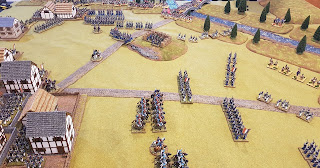 The Light Division, Guards and Blantyre's Brigade force back the French in the south. After losing a Light Battalion in an inital assault (despite having a 2-1 advantage!), the Light Division finally takes the Hamlet before Santarem. Arnaud's Brigade has now lost 3 battalions and its skirmish screen. 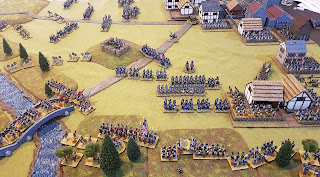 The French continue to fall back towards Santarem from the west, pursued by the British cavalry. 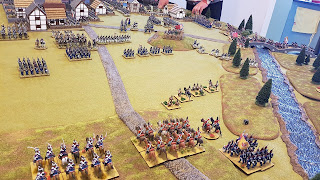 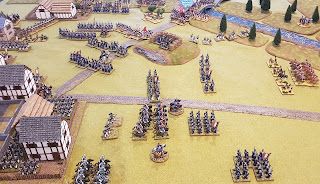 The British Guards pursue the retreating French, despite still being in some disorder themselves. 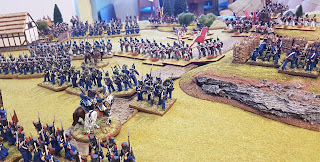 A French Cantiniere and Artillery Officer watch the action from Santarem. 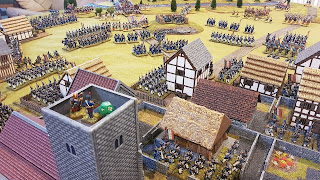 Arnaud's brigade falls back turn 8, another downpour of rain occuring during this turn, sparing them temporarily. 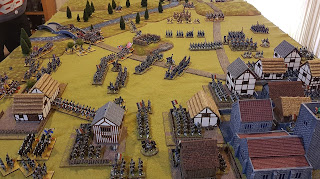 But turn 9 the rain stops, and the British advance and two more  shaky batttalions from Arnaud are lost to British volleys. This breaks Arnaud's Brigade. 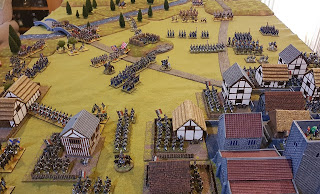 Looking at the situation we call it there as there is little the French or British will be able to achieve in the time remaining. French have lost Arnaud's Brigade (5/8 losses), and a couple of other units. British have lost a Light Battalion and two Portugese battalions. Skirmish screens on both sides are also very spent. 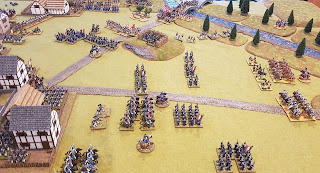 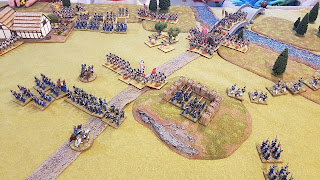 Matt and I agreed that this "stuck in the mud" scenario was more fun than it first appeared and it became quite tense in the second half of the game. Still we did think that less harsh mud rules would probably improve it as a game! My standard rules would have classified the mud as rough terrain, meaning half speed for units except skirmishers, cavalry units suffer large melee disadvantage, and long range artillery fire effect is reduced across entire battlefield. The river itself would take a turn to move into and another to move out of, with no firing in the turn the river is moved into. This may not be enough to match the problem this mud caused historically, but the 1 in 6 chance of moving is very tough for the British! The British KGL Brigade and artillery didn't make it onto the table, as it took too long for the Guards to get a bridgehead established. One can understand why Wellington called this one off!

We also used my existing rain rules which still allowed cannon fire at short range, but no other fire, and foot units have some extra vulnerability to cavalry in rain too, but these differences are minor ones.
Holding the British at the mudline seems like a good idea for the French with the existing mud rules, but unfortunately I took too many casualties from a single Brigade in the process. I should have either reinforced Arnaud more heavily so they had more immediate reserves to call on, or fallen back more quickly. These moves needed some careful timing! Of course co-ordinating this from a command perspective is also easier said than done.
Michael commented that in previous playtests (I think using Shako rules, and less harsh mud rules also), the two large British Guard battalions carried all before them and were basically unstoppable. Their performance depends on how powerful they are in the rules you use of course, and how difficult it is to carry out a successful assault across a causeway. Guards have been downgraded in my own 321 rules but they are still powerful as they demonstrated here. They did get unlucky in not establishing the bridgehead immediately on turn 3, and losing their general, and they had to spend some time reforming after this setback.

Anyway, this was another interesting game, and we are hoping to do another Peninsula scenario playtest next week.
Posted by Chasseur at 19:36