How long are your Napoleonic Rules?

I was recently sent a set of amendments a local group is using for the Blackpowder 2 rules. Many thanks John H, who also ok'd these for sharing below if you want to download. I was also rather startled by the length of this amendment list (20% as long as the rules themselves!), and ended up wondering just how wordy various Napoleonic rule sets are in comparison to each other.

Hence this post trying to answer that question, which I thought I would share on the chance anyone else is interested! Mainly I wanted to know the length of the core rules, and so I separated out extra material included in the full text, such as introductory material on the Napoleonic wars, army lists, scenarios and so on.  Making this distinction, I then used the word count function in google documents with electronic copies of rules I own to get an estimate of how many thousands of words they are. See the results in this graph (click it to see larger version). Below are brief remarks on each ruleset, listed in order of wordiness of the core rules, together with a link to purchase or download it. 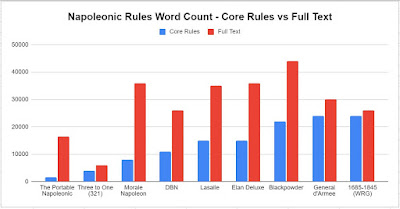 Portable Napoleonic Wargame
Core Rules 1.6K words, 17 pages; Full Text 16K words, 172 pages.
This is actually four sets of Napoleonic rules, a Brigade set of rules (which is about 14 pages and what I used to make this estimate here), and then a few extra pages for each of the variants to convert it into into successively higher levels of play (Divisional, Corp, Army - see 'Command level' on my Rules Review page for more about this distinction). Designed for play on a grid primarily. Extra detail includes sample battles and more rules options. Also available as a pdf version.
321 Fastplay Napoleonic Rules
Core Rules 4K words, 4 pages; Full Text 6K words, 6 pages.
My own free rules available on this site. As others have commented these are short but also dense with detail. Let's just say WRG was a significant mentor. Extra 2K detail is army lists and tournament scenarios. There's an additional 2K of design philosophy/explanation on the download page I didn't include here, but this would be part of many rules and could be added to full text total.
Morale Napoleon
Core Rules 8K words, 22 pages; Full Text 36K, 96 pages
These rules have the distinction of being the only set where it took less time for me to play the battle than it did to set it up! Very brief and brutal, and regimental/brigade level. Most of the text is campaign and scenario rules, which I think is a commendable diversion from the usual pattern you see with rules.
DBN
Core Rules 11K, 23 pages; Full text 26K, 50 pages
Brigade level (i.e. each stand is a Brigade) set of rules based off DBX series of games. If you like those as I do you will likely like these. More detailed than DBA, but not DBMM level of complexity. Very accessible Napoleonic wargaming too as you don't need masses of figures.
Lasalle
Core Rules 15K, 60 pages; Full text 35K, 130 pages
This is based off the first edition, which I did this review of here. A second edition is about to be released though, and the title links to the official site so you can keep track of progress on this. Extra text is mainly army lists and a few game setup ideas.
Elan Deluxe
Core Rules 15K, 60 pages; Full text 36K, 139 pages
A ruleset I haven't played but I had an electronic copy and so I added it here for comparison. It is available as free download from the link. Extra text is some quite detailed army lists and campaign rules.
Blackpowder 2
Core Rules 22K, 90 pages; Full text 44K, 186 pages
I wrote this review of these rules here. As mentioned they are rather messy, and the main New Zealand play group has another 4K of amendments on top of this (excluding commentary)! I've been given kind permision so you can download these  New Zealand amendments, which were written for a Borodino refight, so some of them are specific to that.
Note: To estimate the word count for Blackpowder I subtracted out the "historical detail boxes" in the main rules, and added in the Napoleonic section later in the book, ignoring all the non-Napoleonic material. Extra text is background material and the other periods covered by this ruleset. For reference I mentioned in the review that a local group also rewrote Blackpowder 1 rules from scratch to increase intelligibility - this got it down to about 14K words and 50 pages.
General d'Armee
Core Rules 24K, 100 pages; Full text 30K, 116 pages
I recently wrote this review of these rules here. A popular set of Napoleonic Rules, and as you will note little in the way of extras beyond the core rules with this set. Also available as pdf version from same site.
WRG 1685-1845
Core Rules 24K, 54 pages, Full text 26K, 63 pages
A formative set of rules from the 1970's. These cover a wider period than just Napoleonics  (obviously given the date specified). Therefore you will find some of the core rules devoted to subjects like elephants, and also oddities (for those used to more modern rules) like quite detailed rules for capturing prisoners. Extra text is mainly sample Seven Years War Army Lists.
That's all the sets I looked at for now and I hope this diversion was interesting for some out there!
And whatever rules you prefer, happy wargaming! :)
Edit - 29.12.2020
Ok here's details for further rules others have sent in, and will add more as I get them.
Age of Eagles
Core Rules 34K, 50 pages, Full text 44K, 96 pages
A well known Brigade set of rules based on the Fire and Fury American Civil War rules. Extra text is scenarios, unit and army data and sundries, and also comes with a DVD with further supplementary info.
Napoleonic Command 2nd Edition
Core Rules 7K, 12pages, Full text 16.5K, 42 pages
Battalion level, but uses a Brigade level combat mechanism. Scroll to link at the bottom of the linked to page for these.
BBB (Bloody Big Battles)
Core Rules 16K, 25 pages, Full text 18K, 56 pages
Advertised as being for late 19thC but can apparently be used for Napoleonics. Resources available and in development for Napoleonics via the Group linked to.
Posted by Chasseur at 18:33