General Sebastiani  led the 2nd Cavalry Corp at Leipzig - the Corp I have painted up over the past couple of months to use in the Leipzig refight tomorrow. He was given the nickname "General Surprise" by some of his troops, due his unfortunate habit of being surprised by the enemy rather than vice versa (not enough scouting with Chasseurs perhaps?!). This may be quite an appropriate command allocation given some of my own Napoleonic blunders, including the heroic but disastrous charge of my Cuiraissiers at the redoubts in our 2012 Borodino refight. Surely things can only improve...

Despite his less than stellar reputation, Sebastiani appears to have performed well at Leipzig as far as I can understand, throwing back the Austrians for a time. Looking at the opposing force lists and map, I expect it will be challenging to achieve as much. He was wounded by a lance blow to the chest at Leipzig, but survived to have an active later political life as a Minister and Ambassador, eventually being made a Marshall of France in 1840. I shall have him leading the charge as befits a true cavalry general, but avoiding enemy lancers if I can!  I'll be posting the after action dispatches in a couple of days - stay tuned!

Speaking of lances, looking at this photo of French Napoleonic cavalry equipment from Wikipedia commons, I note the pennants on the lances are much larger than I expected. If accurate then perhaps the Front Rank pennants I expressed doubts about in my Lancer post are ok afterall.

Some further more information about General Sebastiani at these links:
http://www.arcdetriomphe.info/officers/sebastiani/
http://en.wikipedia.org/wiki/Horace_Fran%C3%A7ois_Bastien_S%C3%A9bastiani_de_La_Porta

Lastly, here's the planned layout for our big Leipzig game - I've never seen a wargaming setup like it before! Click on it to see a larger image. I'm assuming my Corp will be deployed to the South East (lower right). 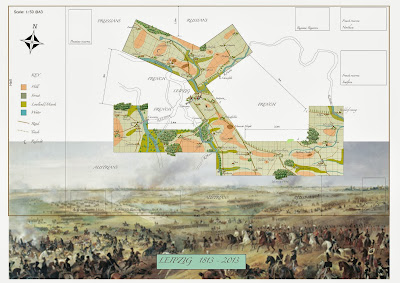