It was my 40th birthday last month, and my good mates whom I've known since I was teenager at the local CWC wargaming club banded together and got me a Russian Brigade Deal from Perry. Six boxes each of 40 Russians! Wow, now I have so many Napoleonics to paint! You bastards! ;) 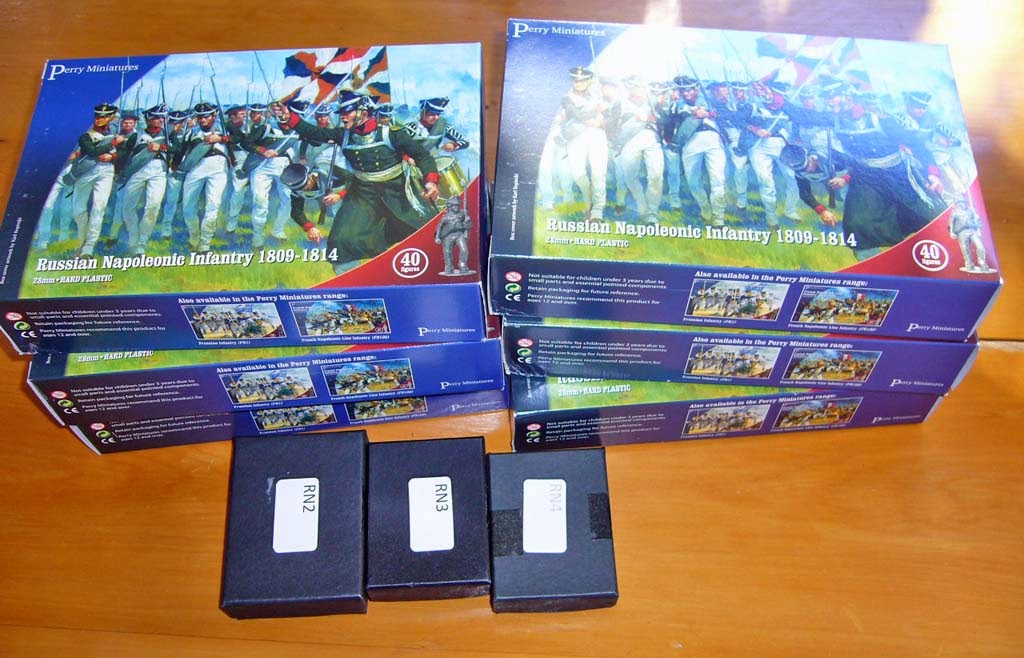 I bought the Austrian Brigade Deal a while back and you save about 20% on the cost to buy the sets individually at the new prices (looks like they haven't taken new prices into account yet), so recommended if you want lots of figures. And if you don't want lots of figures, and stupidly grandiose amounts of figures for that matter, then why are you bothering with 28mm Napoleonics and "The Beautiful Game" in the first place?! ;)

As well as the six boxes of plastic infantry, it comes with three mounted officers, and two 6 pounder guns - one loading and one firing.  All great models.  My only slight hesitation in saying this would be with the officer on rearing horse waving sabre around in the air, sculpted to realistic proportions. Awesome figure, but this is a pose I always try and avoid with metals if it is done realistically as opposed to having some extra bulk for wargaming toughness, as it is pretty delicate. His plume is also rather delicate. Possible solutions include a pinned plume (probably one that is a bit thicker from a plastic kit perhaps), and replacing the thin metal sabre with a plastic one or sculpted pipe or orders or something... or just being careful when using him. I wonder if any readers have any good ideas for this problem? Does any company make 28mm steel wargaming swords? I generally prefer swords shouldered or held down like on my Chasseurs, though I have a French General waving his sword around... so perhaps a Russian one is ok too.

Once again the Perry's plastic sets include these painting guides and flag sheets. Very useful, and with a bit of care and matt varnish I think those flags might actually be usable. 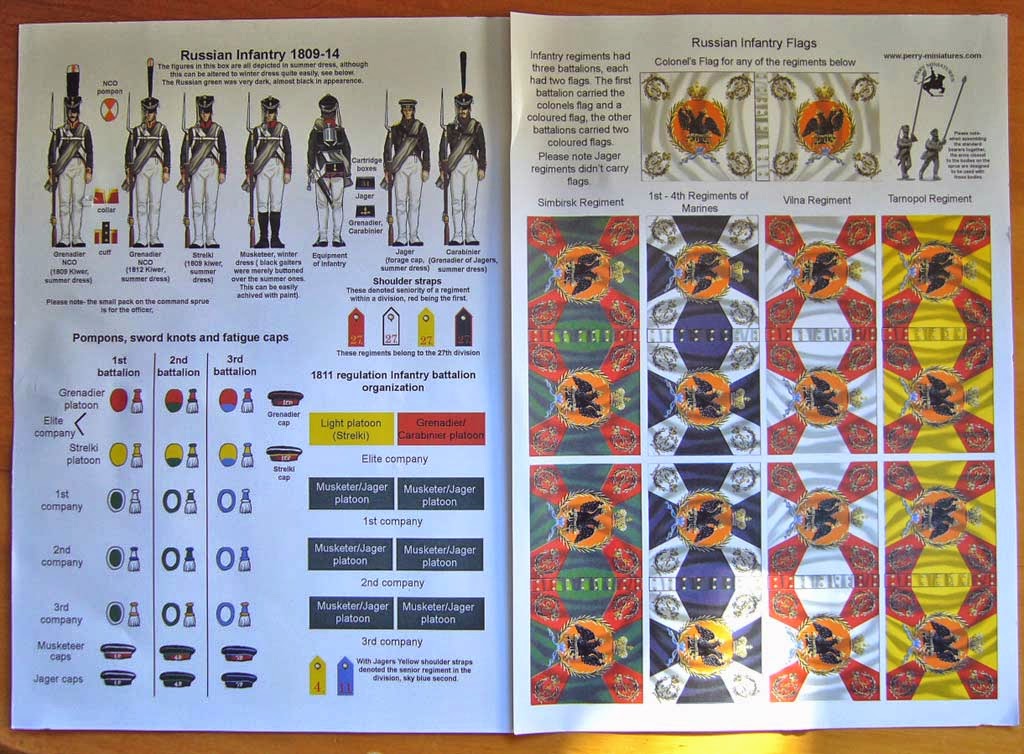 Then there are the sprues, six infantry sprues each with six models, and a command sprue of four models, plus the plastic bases. I will be basing them on 50mm square MDF wooden bases as usual. 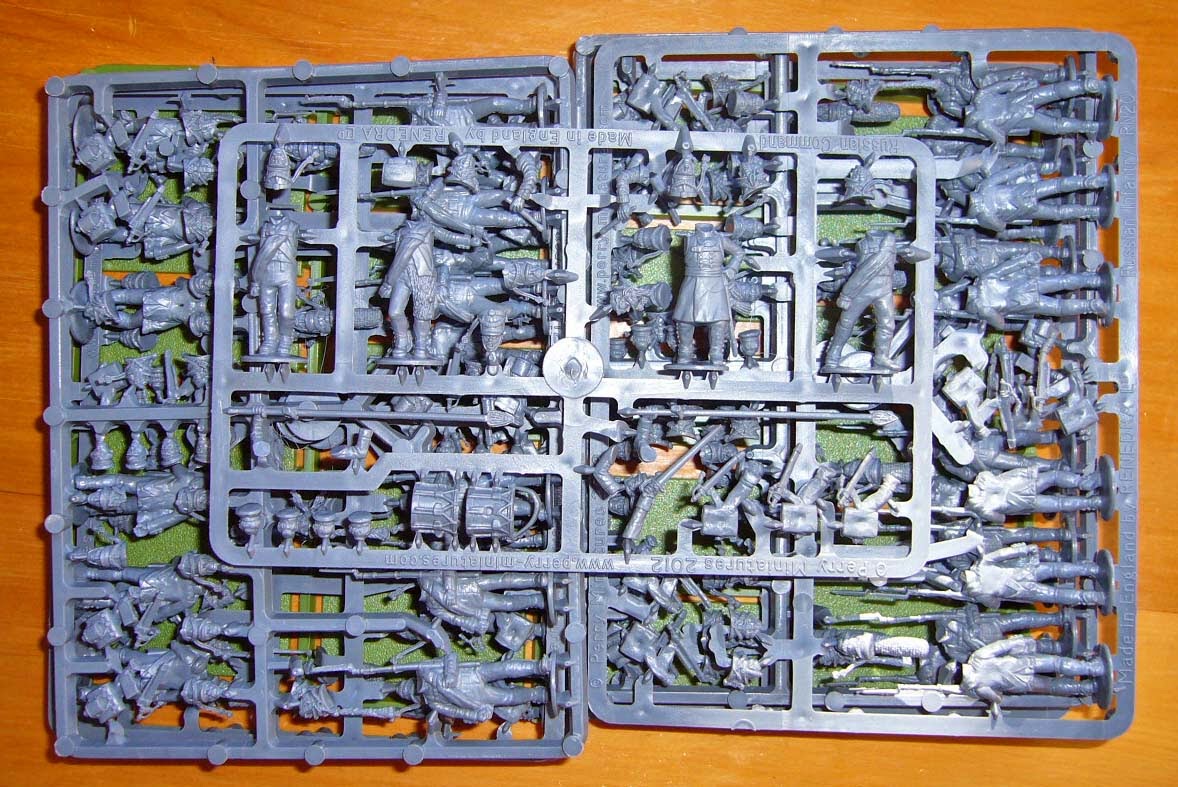 You have to choose which heads to stick on, which is an understandable design choice, though it does add to construction time a little compared to the French Infantry.  Each sprue has head options for 1809 Kiwer (shako), 1812 Kiwer, or fatigue cap, and the infantry sprue also comes with two 1809 and two 1812 Grenadier Kiwers. Backpacks come with swords and ammo pouches attached. 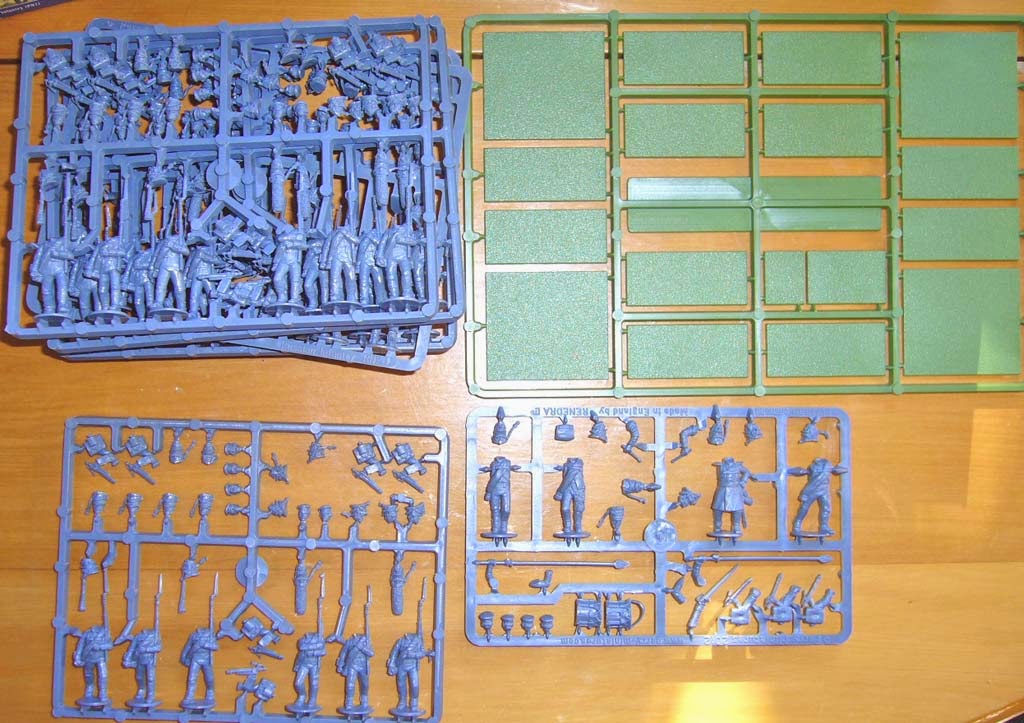 So more top notch figures from Perry, and these plastics really just beg to be put together and painted up. I'll add a few more guns and some cavalry, after I've finished off the French and started on my Austrians...

Also see this great review of the Perry Russian Infantry that I just came across as I was finishing this, which includes some useful size comparisons with other manufacturers.
Posted by Chasseur at 13:34