Marshal Poniatowski and staff. Figures once again from Murawski Miniatures. A worthy sculpt of the great Marshal I think! These are from the larger command pack that comes with 7 figures total. 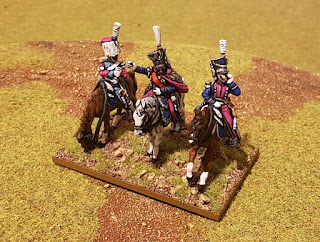 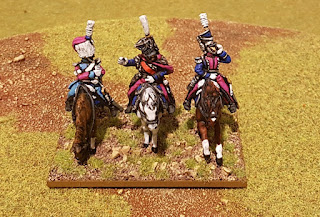 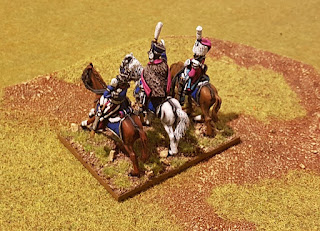 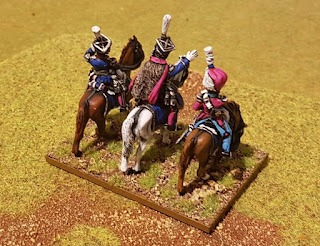 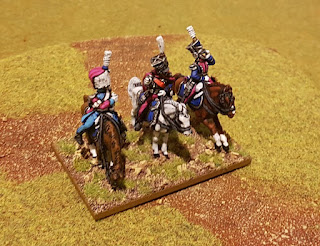 Poniatwoski was made a Marshal of France after commanding the right wing at the Battle of Leipzig in 1813.  As the French were forced to retreat he commanded the French rearguard, being trapped in the city of Leipzig after the bridge was prematurely destroyed. He refused to surrender despite the overwhelming odds arrayed against his forces. He had been wounded by a lance several days earlier, and shot twice in the fighting at Leipzig - once in the arm and once in the side. Despite his wounds, he rode his horse into the Elster River to escape. However, the current was too strong given his weakened state and he was swept away and drowned - or as other accounts suggest he may have been shot for a third time as he entered the river. The event has been a popular subject for paintings and engravings like the following. 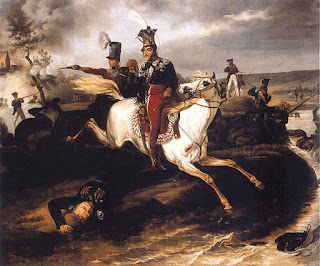 Napoleon described Poniatowksi as "brimming with honor and bravery" and that "He was a real king, had all the necessary traits of character. Had nobleness of a chief, magnificence, humanity, the same in seriousness and in play, soul"

A good account of Poniatowski's dramatic life can be found here. 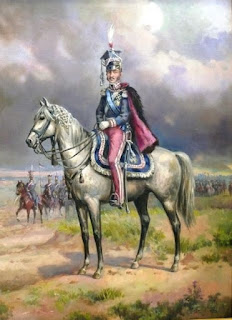 Thanks for looking! That's the last of the Poles I have planned for the moment bar a few more staff, and possibly cavalry. I'll add some group photos of all my Poles together when I have a moment!
Posted by Chasseur at 15:44