Some Austrian Artillery limbers finished at last. I've had some of these for about 5 years, but kept procrastinating as I wasn't sure how to do the ropes connecting the horses to the limber. But after asking about, I found a technique that worked for me - thanks mainly to Stephen Walsh on the Facebook Napoleonic Wargamer Group who generously explained his process of rigging these things up.

I'll also do my own "how to" post on this blog showing how I did these, but just some pics of my first completed limbers for now. 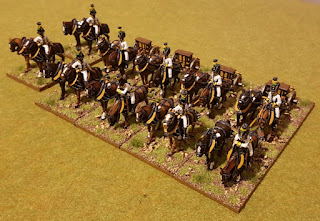 I bought two 4 horse and two 6 horse Austrian limbers, but I based the 6 horse ones as 4 horse with another pair of the team based separately to provide a bit more flexibility.

Perry limbers don't come with modeled connecting traces (the rope bits). Front Rank limbers come with traces, but they don't do Austrian limbers, and not sure how compatible they would be with Perry anyway. Many people seem to just do limbers without traces, but I wanted them on mine as it looks a bit weird otherwise, to me at least.

I used the Three Strand Rope from Gale Force Nine to hook them up (suggested to me by Jeff Wesevich, also on the Facebook Napoleonic Wargamer group, thanks!). This matches the rope on the Perry castings very well too.  One two metre reel of it would do about eight 4 horse limbers I think. 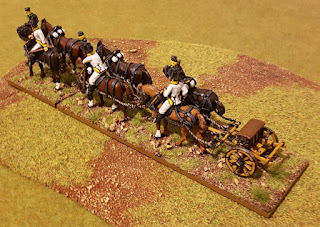 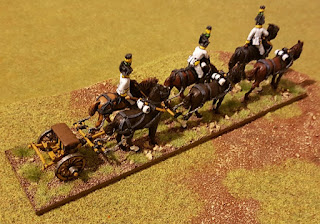 I went with a fairly dark colour on the traces/ropes in order to better hide any modeling mistakes with these first attempts! :) 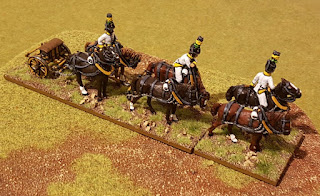 Limbers for all the guns is quite an expensive and time consuming enterprise in 28mm. I thought a reasonable compromise was to at least provide limbers for the horse artillery to begin with, as it seems particularly incongruous to have the horse/cavalry artillery racing around without limbers! 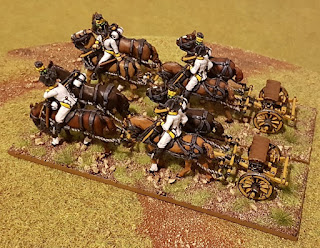 Ok, thanks for looking. I've now got six French limbers in process too so will post them in the next week or two.
Posted by Chasseur at 10:20