Matt's been asking that I use my Guard for a while, and I finally relented for the next small engagement.  Despite painting them up well over three years ago I've never actually used them, so perhaps it was about time! I painted them because bizarrely we didn't have enough of them available amongst local gamers for some big refights we have planned. We have perhaps the most restrained French players on the planet here! No one wants to fulfill that stereotype of the player with tonnes of Guard and not enough of the regular stuff I guess :) 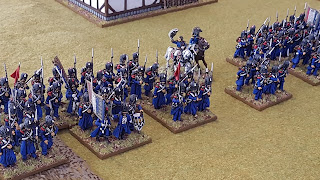 Here's the mighty French Guard list I decided upon. I figured I'd take the very best I could for the points, ending up with a small 1814 style force. 1000 points works out to be about a small Corp on average if you take each unit to be a large battalion or under-strength regiment (i.e. about 600-1000 men), but it's a very small Corp for the Guard here. I have an Old Guard Infantry Brigade, a Middle Guard Brigade, plus a Guard Heavy Cavalry Brigade and Guard Light Cavalry Brigade. Napoleon as Genius Commander is in charge of course, costing 100 of the 1000 points available! I could have taken him as a regular Army Commander on one of his haemorroid off days but didn't seem right to do so! Note also the Young Guard in the below list with unit count listed as zero - these were originally included too, but with all the other Elite and Veteran troops something has to be left out at 1000 points. Similarly for artillery I end up with just a single battery of Horse Artillery available given the points restriction. 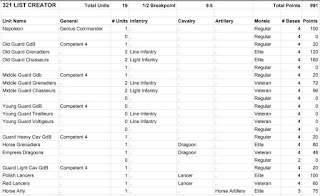 The British list is also very good quality, though still considerably larger given they have many regulars. Command and control seems to be another area of economising, with Wellington having an off day and not being rated as Genius - I wonder how will that work out? 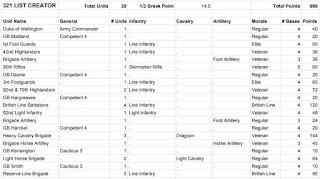 We roll up a battle scenario using 321 rules again, with the British attacking in wooded country, and yet another encounter battle which Matt keeps rolling up. So half of our Brigades start in reserve. Despite the wooded location (which doubles odds of woods being generated), we instead end up with many hills, including a superbly useful ridge in my left-centre, and otherwise open terrain.

I start with my Light Cavalry, and Old Guard Infantry Brigades on table and the Middle Guard and Heavy Cavalry in reserve. Here's the Dutch and Polish Lancers. 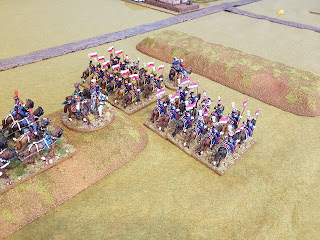 View from my deployment area. The British start with three Infantry Brigades on table, and one Infantry and two Cavalry Brigades in reserve. 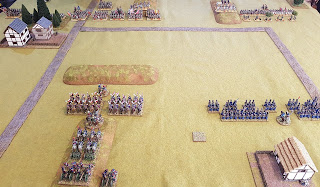 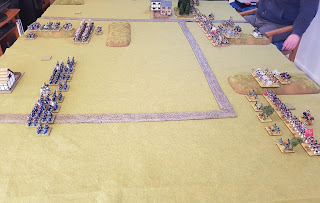 The Old Guard Brigade ready to advance on my right. Grenadiers in second line and Chasseurs in skirmish order in front.  The plan is to jog forward Battle of Hanau style and sweep away all before them! 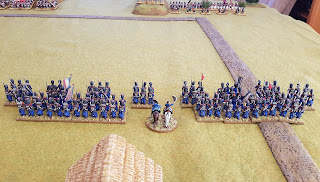 First turn and the British approach the central ridge and occupy the built up area on their right. I launch the Lancers over the ridge towards them, just aiming to force them into square and slow them down a bit. My Horse Artillery also advances and unlimbers and starts to wreak havoc with Canister. 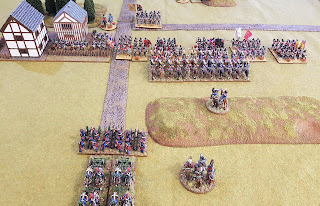 The British form square and repel the lances easily enough as expected. 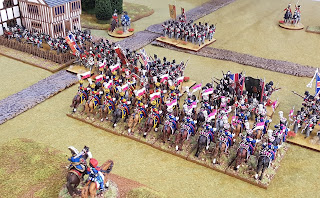 On the right my Old Guard all form line and advance rapidly, hoping to achieve a result before weight of numbers can tell against them.

First volley from the Old Guard knocks most of the skirmishing rifles out of the fight, and the remainder pull back. 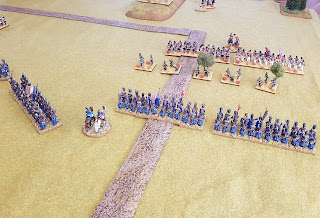 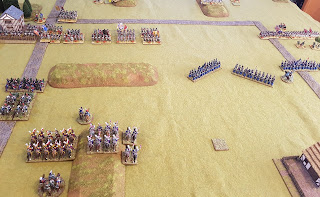 The British struggle to advance with their infantry against my left, with a lack of their artillery and cavalry hampering them, and the ridge providing valuable cover for my cavalry. 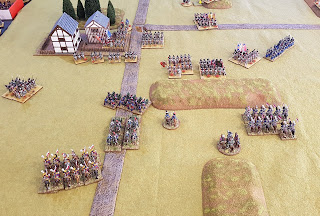 On the right the Old Guard break a Highlander unit in the salient this small British Brigade had formed here. 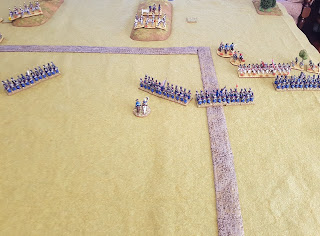 Reserve British Heavy Cavalry arrive just in time to halt the Old Guard advance, and artillery and musketry inflicts the first disorder upon the Guardsmen. 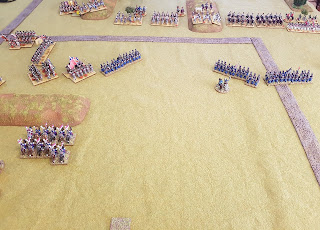 The British are still struggling on the left, coming close to silencing my Horse Battery with Light Infantry, but not quite managing it. 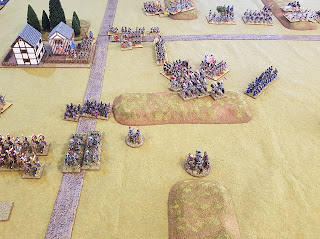 My own Heavy Cavalry arrive, Horse Grenadiers and Empress Dragoons racing up the centre. 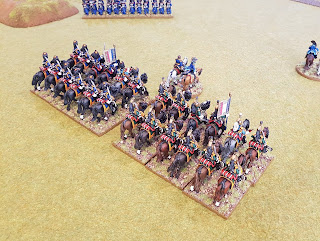 Just in time too as my Lancers have conducted several charges by now and are becoming dangerously exhausted. 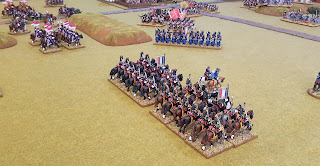 My Old Guard are able to remain in line as the British Cavalry seems reluctant to charge. Matt experiences a rather disastrous series of command checks for his Generals who seem intent on holding rather than doing anything useful. 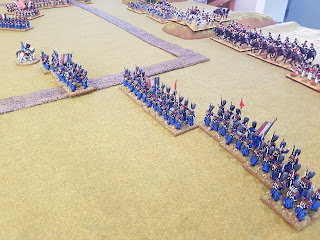 Nonetheless my right flank Old Guard Chasseurs are now only one hit away from dispersing and I pull them back to reorder. 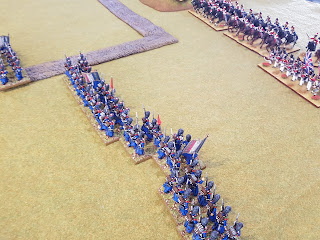 The Middle Guard arrive, while the British Light Cavalry Brigade has got itself lost somewhere and is nowhere to be seen. 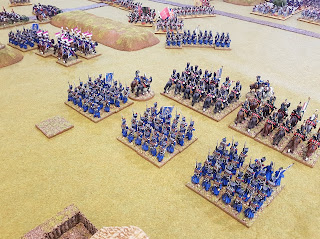 In the centre, the Old Guard Chasseurs attempt to charge the British Guards, who have been formed in square to ward off the Polish lancers much of the battle. However artillery fire and a volley from the British sees the Chasseurs failing to charge home. 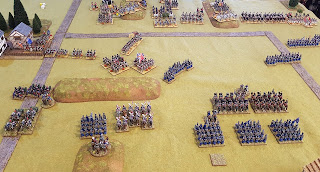 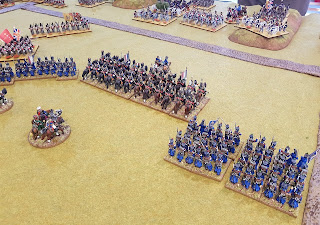 In one of those "you wouldn't do this if it was a campaign" moments, the Horse Grenadiers charge the Scots Greys, and the Empress Dragoons fail to charge home on the Artillery. The British Cavalry swans about in front of the Guard infantry taking casualties from musketry and doing nothing useful though covering the reforming British Guards at least... 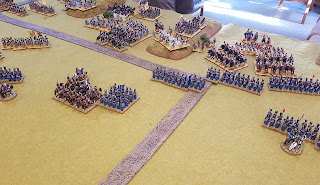 The Horse Grenadiers force the Scots Greys to retire but are pretty beaten up in return and so they withdraw to reform rather than pursuing. (The Scots Greys wouldn't have had as much sense if they had won of course...)

The Middle Guard have been attempting to advance on the guns on the right, but heavy canister fire forces them to withdraw in a hurry.

The Middle Guard on the ridge have also taken heavy artillery and musket fire as they try and defeat the very resilient British Guards. One of the Middle Guard units breaks under this fire, and the other unit routs also. 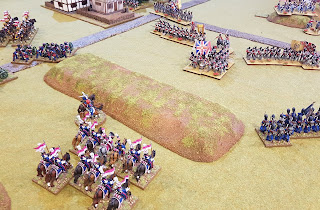 Right then both the Old Guard and Heavy Cavalry Generals are killed by Artillery fire while attempting to reform their troops!  Who knew that sitting around in front of three batteries of guns was such a risky business? Replacements quickly take their place though and the emergency passes. The British are still having disastrous command checks, holding rather than advancing where they have an advantage, and they just miss finishing off the retiring Middle Guard with artillery fire. 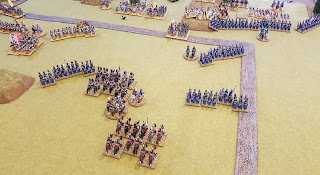 And at last the British reach the tipping point. Their right flank Brigade completely collapses in a cascading series of routs, and a Heavy Cavalry and Guards unit on their left are also overwhelmed by the Old Guard. The British force has had enough and quits the field! 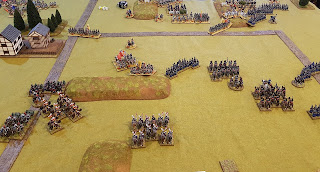 A close run thing. This could have easily gone the other way with just one or two different dice rolls at critical points. The British were also unable to utilise their superior numbers to good effect due to command problems. Indeed their Light Cavalry never showed up at all despite a 50% chance each turn for six turns with a reroll on at least one or two of those turns from the Army Commander.

I'm still not sold on the Elite rating for the Guard (morale 5 as compared to 4 for veteran), which I'm concerned is too powerful under these rules given the odds ratios it generates. Just how good Elite troops should be is a contentious issue of course. Morale should be hugely important, but I also don't believe in 'supermen' and the Old Guard felt pretty amazing in this game. Not that they did anything unreasonable by historical standards perhaps, but they are just so resilient.  Matt felt they were probably ok though, and as it turned out just one or two different dice rolls would have changed things completely in the last couple of tense turns! We'll have to give them some more testing.
Posted by Chasseur at 22:16