Another small encounter from the Michael Hopper "Rise of Eagles" book. This time back to 1805 for Battle of Albeck. Part of the campaign where the unfortunate Austrian General Mack was forced to surrender by underhanded French tactics like marching quickly and starting battles before breakfast. 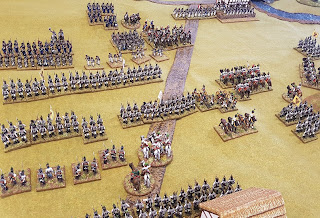 October 14th 1805, Two forces are marching to the sound of the guns and the battle at Elchingen, where Ney was trying to cut off the Austrian retreat. Dupont's veteran French troops meet some unhappy Austrians near the village of Albeck and both sides cautiously engage each other.

321 Fastplay Napoleonic Rules were used to test this scenario out.

The French are outnumbered in both infantry and cavalry, but have better quality troops and the advantage of attacking and taking the central objective of Gottingen first. I decided to make French Artillery and Hussars Veteran, though they could also be regular.

My buddy Dave came over for the game, and took the French. Here is the Austrian starting postion, with Hohenzollern in front of Albeck and Sinzendorf occupying it. French setup area top left.  Gottingen (near the bridge across the river) is worth one victory point to the side holding it at end of the game.  Breaking Crabbes formation is 2 victory points to the Austrians, and breaking each Austrian formation is 1 victory point to the French. The river is fordable though rough terrain. 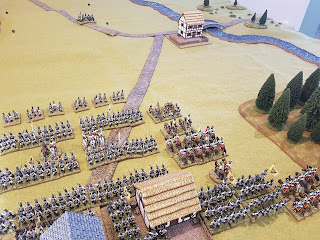 French deployment done off in the distance. 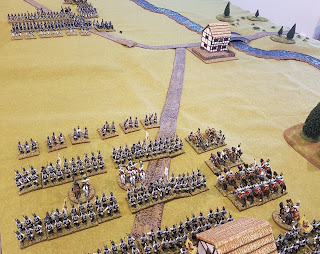 The French, deployment, with skirmishers and Legere in line formation. Veteran Line Infantry in attack column behind ready to advance on Gottingen and hold it. 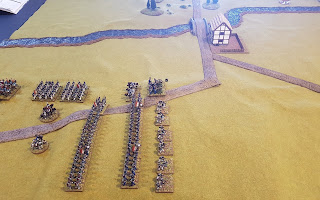 As the French advance, Austrian cavalry rides forward to threaten them. 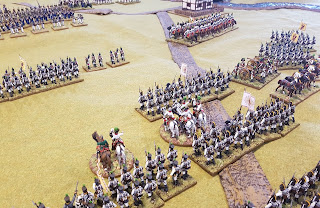 However, artillery fire and advance of the French cavalry and solid columns of infantry sees the cavalry fall back. 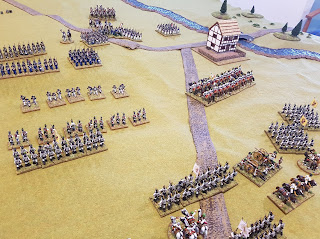 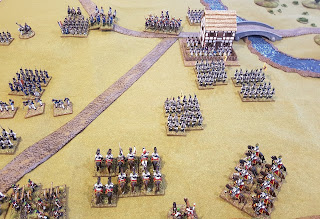 But the lead Austrian unit is broken by the veteran French defenders, and some disorder occurs among other units, which fall back. 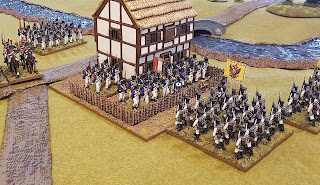 The French push hard everywhere, Sizendorfs formation breaks, and the Cuirassiers are chased off and broken by the Hussars. The Hussars in turn fall victim to muskety from the garrison at Albeck, as they try to reorder their blown formation in the Austrian rear. 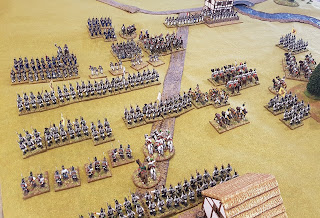 Both sides artillery is broken. Hohenzollerns formation now does its best to see off the French assault. 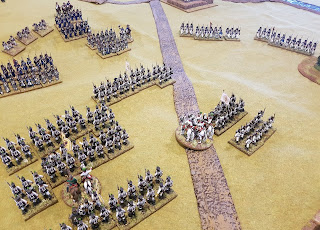 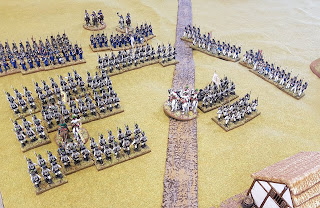 French win a 3-0 victory start of their turn 8,  having broken both Austrian formations, and holding Gottingen. French have lost one regular line unit and their artillery and hussars. 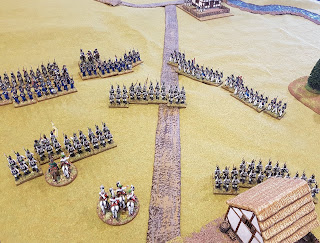 Later that evening I decided to have another try of this solo, to see if different tactics might give the Austrians a better chance. I used similar tactics for the French, but the Austrians form a more defensive posture. The plan this time is to use the three regular Austrian line to take the brunt of the French first assault, counter too aggressive an advance by the French with cavalry, and make better use of the double line of Austrian reserves compared to a single reserve line for the French. In other words wear the French down with attrition by using the superior numbers as I should have tried in the first game!

This works much better, as can be seen below, on Austrian turn 10, the French units opposing the Austrian left have been driven back in disorder, with both Legere units breaking in the same turn leaving just the regular line who are in a very poor state. 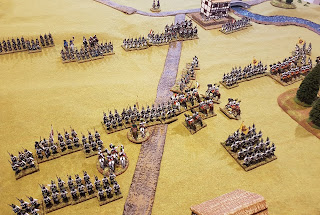 The Austrians advance on their turn 11, and deliver a volley to break Crabbes formation, which includes the unit holding Gottingen dispersing as it's morale fails. The game thus ends 2-0 to the Austrians this time. Hohenzollerns formation is only a single unit off breaking though, so very close! Both sides cavalry just glared at each other this game, neither side wanting to commit to risk of engagement and being content to support the infantry. 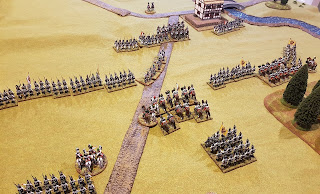 Also of note, on the right a recruit Austrian unit did superbly by managing to rally under fire repeatedly for about four turns, keeping the French back long enough with support from the Chevaulegers.  Not a typical result or one to rely on though! 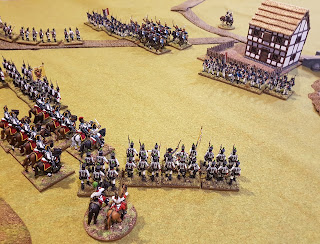 Another interesting little historical scenario from Michael Hopper. The French have the advantage in being able to take Gottingen first (and the one victory point it is worth), which forces action from the more reluctant Austrians.  The battlefield used here was 8 x 6 feet, or 240 x 180cm. However, I expect it could well be played entirely in the 6x4 foot area anchored at the Austrian deployment area as venturing across the river just seems like a way to divide your forces unhelpfully and put yourself at a strong disadvantage.

How one rates units is another point of decision to make with this scenario. Making both sides Cautious in terms of command ability might help reflect the actual situation where both sides were hesistant about advancing. They didn't know where other enemy might be and consequently the actual battle was more of a draw. The French assaulted the Austrians but then pulled back.

In these refights I had also rated the French hussars (1st Regiment) as veteran as compared to the regular Austrian cavalry units, which I'm not sure is justified. That meant they were equal in melee prowess to the Austrian heavies under rules used (but with a better chance to retire and rally instead of breaking if they lost the melee), and superior to the Austrian light cavalry. But if the Austrian Cuirassiers had an advantage over the Hussars as they may well have had, that would give the Austrians a boost in the scenario and more options.
Posted by Chasseur at 22:38