Yes you read that correctly.  Local nautical enthusiast Andrew suggested we play a 15mm Naval game, and not quite believing what I was reading, I readily agreed. 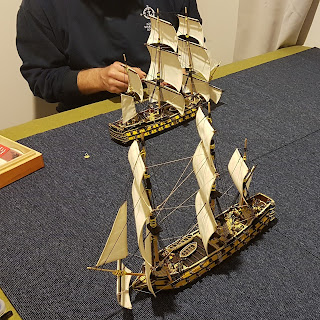 Andrew couldn't remember the company that made these, but said they are out of production resin models he has had for ages. 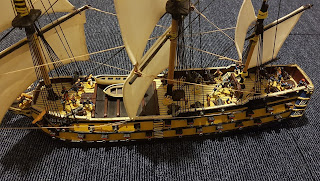 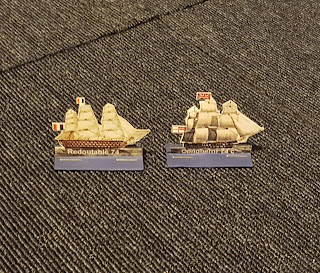 These actually look quite good I think, with 3D models behind. 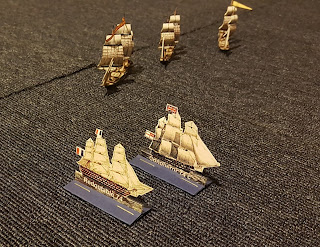 Bit more obvious from this angle of course! 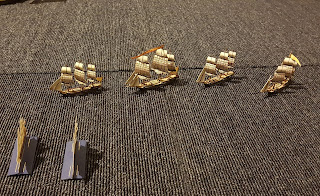 These ships are a scale more commonly used for naval gaming, 1/1200th Skytrex models I believe. 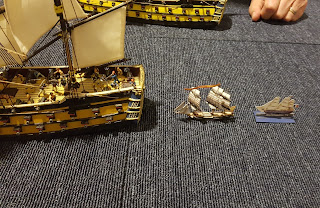 With the Skytrex models Andrew also made them so the different masts can be removed to represent battle damage. Impressive but wait until you see what can be done with the big models! 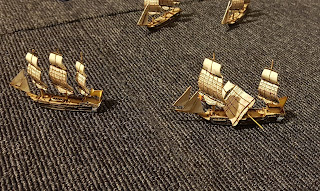 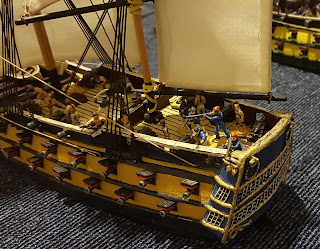 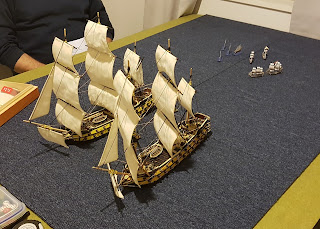 So onwards with some testing of some rules. What Andrew wanted to try was using the large ship models to represent attitude of the ships to each other and damage, while two smaller ship models were used to represent the actual positions of them and movement. 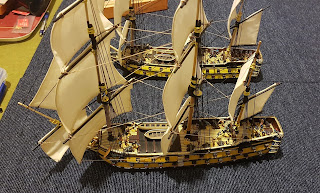 Here's the two smaller ship models moving about on a 5x5 grid (marked out quickly with some dice). Alternatively we could have just used a bigger table for the big ship models (e.g. 8x6 foot rather than 3x5 foot area could be ok). 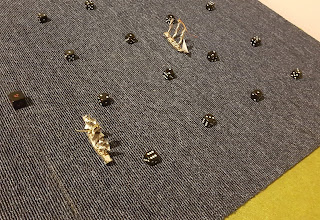 Rules were less than four pages, this one gives an idea of the gunnery and results: 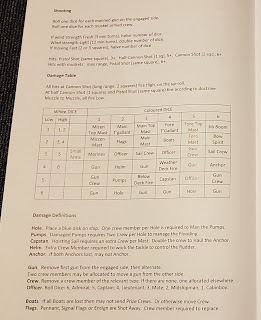 I'll add this brief guide to some of the rigging here too... 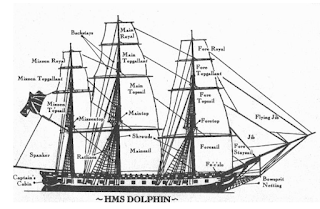 First casualty, an unlucky gunner on Andrew's ship. Each crew figure lost represents maybe 15-20 lost, suppressed, concussed, attending to wounded, psychological casualties etc. Each gun model lost represents about 5 guns out of action.  We took each ship to be a 74 gun Ship of the Line. 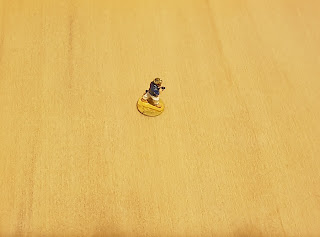 Now the incredible thing about these 15mm ship models is that Andrew made them so that all the sails and rigging and masts are also moveable and removeable, as you either increase/decrease sail, have pieces of it shot away etc! A bit of effort in some instances to achieve this but looks great! Here we have furled lower sails to form battle sail (to reduce risk of self-inflicted fires from cannon and musket fire). 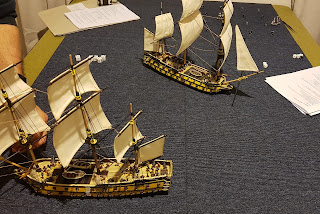 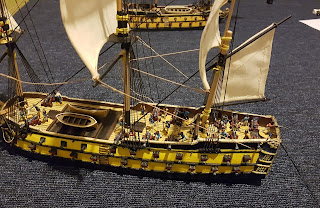 Some fires started on my ship by enemy cannon fire,  though the crew manages to put them out quickly! 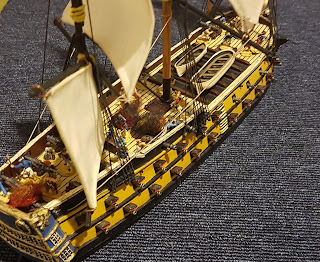 Coming around, you'll note my ship has now also furled the top sails, and reefed sails on main mast and foremast to reduce speed. 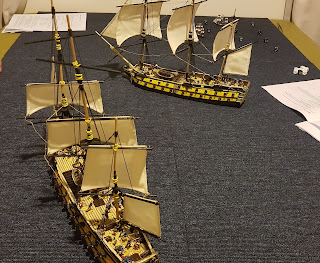 Casualites on Andrew's ship, four guns, the captain, a marine, a midshipman and two gunners, the anchor shot away. The top mainmast is also toppled and falls onto the deck, though Andrew hadn't written rules for  further effects of this yet - I helpfully suggested it should squash D6 of his crew but Andrew was more hesitant :D 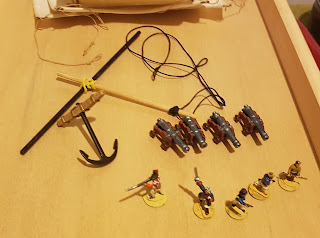 My casualties, two midshipmen, a gunner and marine, lots of cannons, and the capstan smashed. 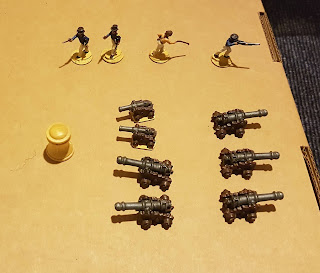 We ended this playtest without either ship striking its colours, as I shoot away the jib on Andrew's ship. 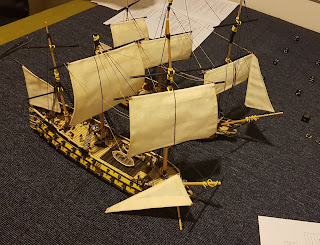 Fascinating stuff and we ended with discussion of potential rules modifications to improve the game aspect.
Thanks for reading, and to Andrew, and hope you all enjoyed the pictures of these amazing models!
Posted by Chasseur at 14:55