I've been playing a series of small Napoleonic games over recent weeks, testing out some rule concepts on a smaller 6x4' table. Here's a report on a somewhat unusual game today. We had a British force that was entirely cavalry (and horse artillery) facing a combined arms Baden and Bavarian force.
So here's a look at the forces, the game, and then some musings on the rules. 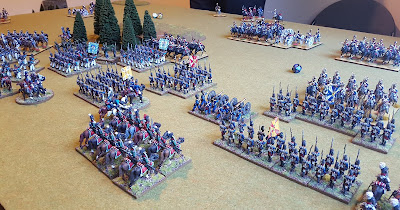 Below we see the situation a couple of turns into the game, with much action happening already.  My Germans have made a cautious advance, except for a Baden Infantry regiment which has advanced in line and been caught in this formation by Light Cavalry.  Other British Cavalry keeps up some regular feints and charges, with other infantry forming square to repel them. Just off camera to my right are my two Veteran Light Cavalry. 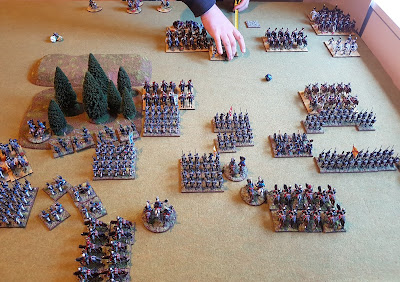 A large wood and hill dominate the centre of the table. Over on the left flank, it is far more open. My skirmishers make use of the wood throughout the game to snipe rather ineffectually at any cavalry nearby. My Bavarian artillery bottom left inflicts a casualty or two but is then disordered by the British Horse Battery opposite, and overrrun by British Light Cavalry. 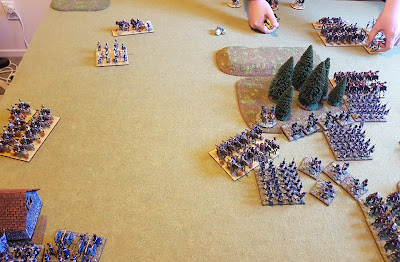 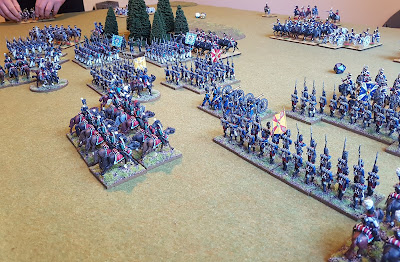 Bavarian squares see off other cavalry, which retires. 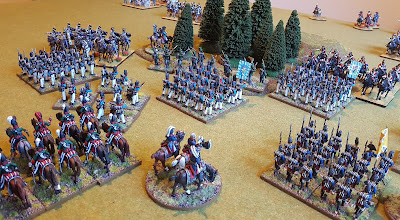 Bavarian and Baden attack columns press forward.  Some of them are forced into square by cavalry, and a Baden infantry unit breaks under artillery fire. The Baden General reforms another disordered line infantry regiment. 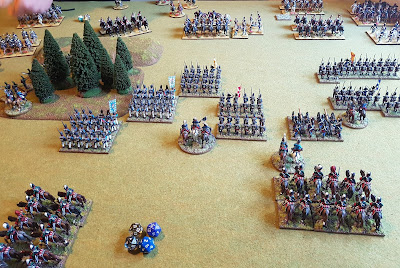 I commit Chevauleger and they break a British Light Cavalry unit, but annoyingly fail to restrain themselves, and pursue into fresh cavalry. This in turn sends them fleeing back in much disorder. The victorius British cavalry follows and sabres my Baden artillery in the confusion before retiring spent. 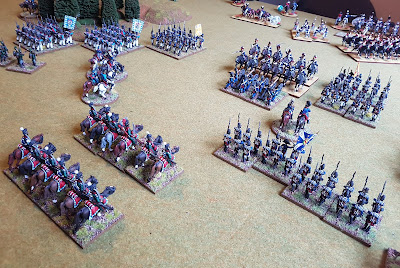 To add insult to this loss, a Baden square then breaks to a cavalry charge! Getting close to a dozen charges by this point, so my recruits have held up pretty well so far I guess....  The British cavalry breaking my square pursues (compulsory for British cavalry in rules used), into more fresh Chevauleger and are broken in turn though, so it's a fair trade!

With my infantry attack hard pressed, I throw forward my own veteran cavalry. The Bavarian Dragoons (here treated as Veteran Light Cavalry - they did became Chevauleger after 1810 afterall!), inflict heavy casualties but ultimately break against Veteran British Light Cavalry -  which in turn smashes into the flank of the Baden Light Dragoons (also Veteran here) who are busy fighting Veteran British Dragoons. The Baden Light Dragoons take heavy losses and fall back in maximum disorder. The British Cavalry charge on into my infantry forcing them into square, and then retiring. 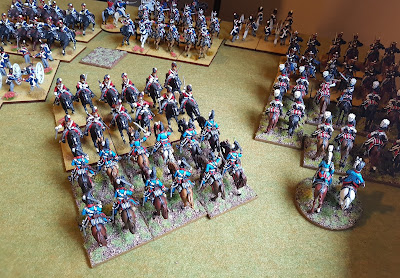 Below, about turn six and both forces are pretty shattered. I've lost both my artillery units, most of my cavalry is exhausted, as is my Baden infantry and the British Cavalry. The British still have all their artillery intact though, so my shaky units will break under this fire very shortly if I just hold back... and we are both only a single unit off breaking.
I decide to throw my freshest Chevauleger at a disordered British Battery, but British Dragoons intercept (top right in photo below). This is expected and I'm at a disadvantage but things are desperate so I have to try something! Goddess fortune frowns on the challenge to the law of averages though, and my Chevauleger break before the Dragoon attack. Then both a Baden and a Bavarian infantry regiment break under artillery fire (both still stuck in square due to all the British Cavalry!). 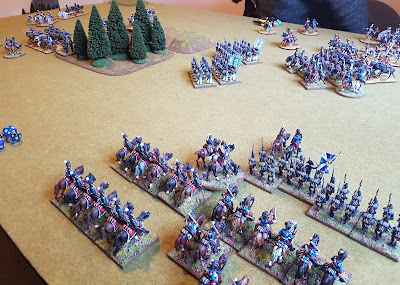 End of the game. The British have lost three cavalry units. I've lost two cavalry units, four infantry units, both my artillery units, and skirmisher unit (though the skirmishers are ignored for victory purposes). Ouch! Having said that the game was actually very close and could have been a victory either way, or a draw.

This game was done in two hours including the setup and packing up. I lost count of the cavalry charges, but many of them were cavalry becoming fatigued against infantry squares. There was also one failed charge against a line, one square broken, and over half a dozen more decisive combats between the opposing cavalry forces, plus of course my two artillery batteries were sabred by cavalry.

These games have been played using the 321 Fast Play Napoleonic Rules on this site, with revisions. The major rule change we've been testing in these games, is using D20's rather than D6's....

I acknowledge D20's may seem like an odd choice!  However, it resulted from frustrations with the limitations of D6's when trying to preserve both subtle distinctions and flavour, but also fast play. I'll repeat here what I said in The Napoleonic Wargamer Facebook group about the  rationale behind using D20's to help meet these objectives:

For these test games then, four D20's have been used by each player.  Using these instead of D6's has effectively halved the number of dice rolls needed. This means fewer physical and mental actions, and  less cognitive fatigue from repeatedly processing masses of dice throws. This is excellent if you want to play monster battles in a reasonable time frame... as I do. Aspern Essling, and a bunch of 1813 scenarios are on the cards.

Anyway I will keep testing, and likely put up a new version of this soonish for any interested.

In other Napoleonic rules news, I see David Brown, the author of General D'Armee is discussing ideas for a GDA2. See this thread for more on this. I find it interesting that he is considering merging charges and melee as I did for my own quickplay rules, and as Bataille Empire does. Plus he is considering using the skirmisher fire mechanic instead of charts, as I wished for in my rules review of GDA, and he wants to improve the command system. This all sounds positive to me and should lead to some faster play and simpler systems I imagine. Also Lasalle 2 has been released, I hear it has fixed some problematic issues in Lasalle 1 and many people seem to be enjoying it from what I can see on the web.
Lastly, on the painting table we have more French underway, and some more Germans.  As part of this next lot of figures I will be adding the below Murat figure to my French, accompanied by two Guard Kettle Drummers! I'm looking forward to painting this command stand up :) 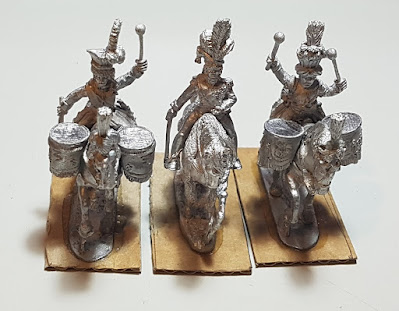