Carabiniers finished. Lovely models again from Perry. Together with two regiments of Cuirassiers this will represent the Heavy Cavalry Division of 2nd Cavalry Corp at our upcoming refight of Leipzig. It's probable that many of them had light blue rather than white coats by this time, but I prefer the look of the earlier white coat. The flag is just one I printed from Napflag. I'll add some pictures of the two Cuirassier regiments when I get a chance. 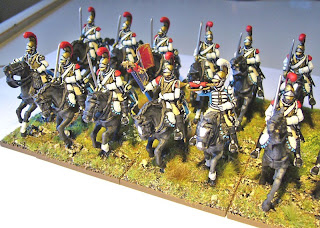 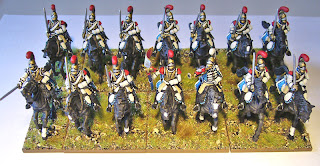 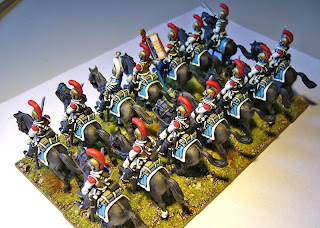 Despite their name I've also left their carbines off for now, on the basis that apparently many French heavy cavalry saw them as cumbersome and cowardly weapons and discarded them or just used pistols. I may add them at a later date though. I understand the Carabiniers also resisted the idea of armour at first, regarding it as cowardly and an insult to their honour! 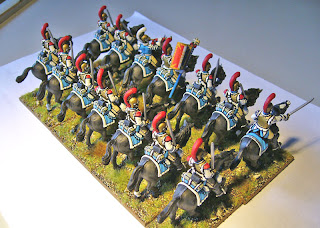 Next on the painting table, three regiments of Chasseurs and one of Lancers.
Posted by Chasseur at 17:51