A friend from England was visiting over the last week, so we went down to the local wargames club for a game. I watched and tried to figure out the rules, while Andy and Ion directed some of my Napoleonics about the field of honour. Ion took command of an infantry heavy Austrian force while Andy led a cavalry heavy French force.

This was only the second game of Lasalle I have been involved in, the previous one being in January this year. Most rules were worked out ok, but thanks to my misdirection the lads ended up firing their artillery in the wrong phase all game! Fortunately this didn't seem to alter things too much, though it did add to some confusion! 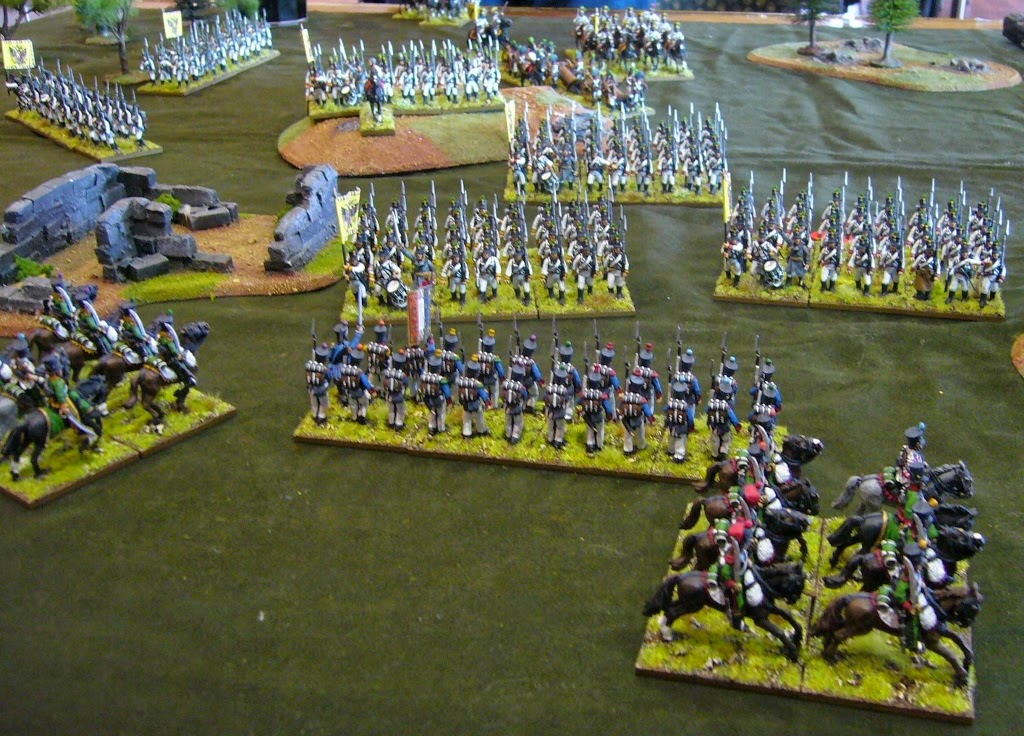 
Both sides heavy cavalry brigades started off the table and would arrive randomly, though with increasing likelihood as timed passed.

Here's the a view down the table. Ion deploys his Experienced Austrian Infantry on his right, where they are opposed by the French Light Cavalry and assorted food, while the Landwehr advance on the French right. 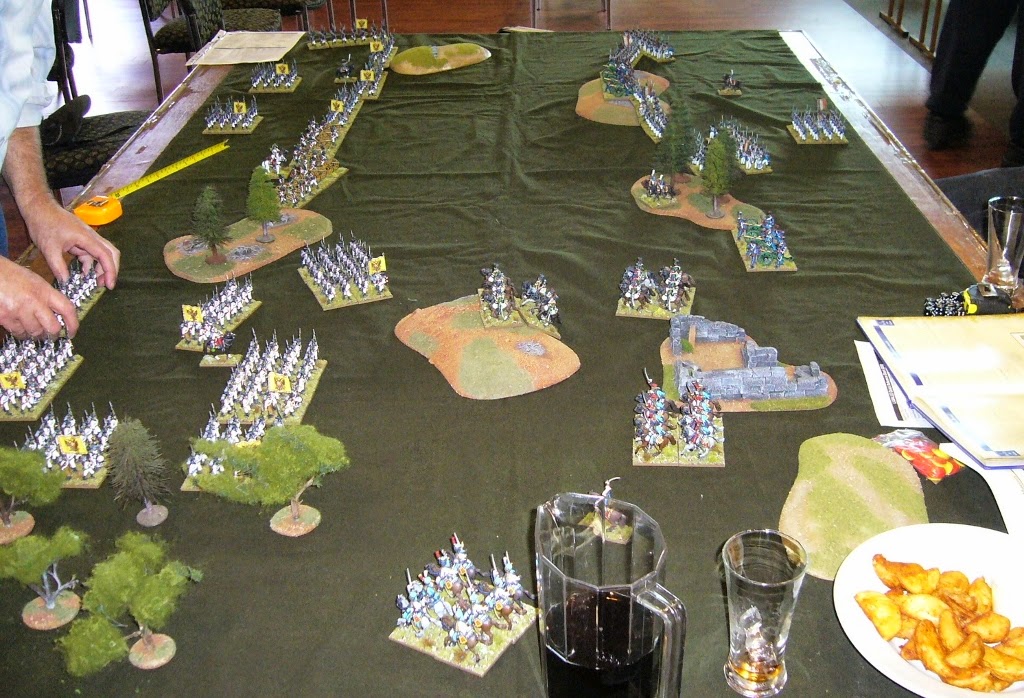 View from the other end of the table, as the French move to redeploy infantry columns to their left flank. 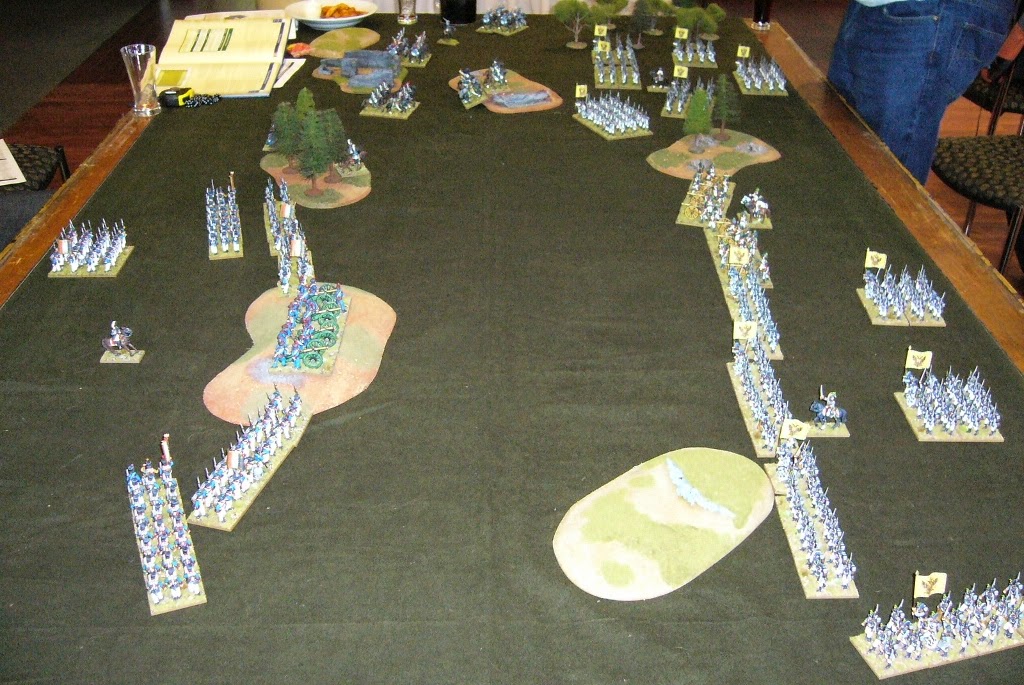 The French Light Cavalry dance around on their left flank, but the Austrians press on undaunted. 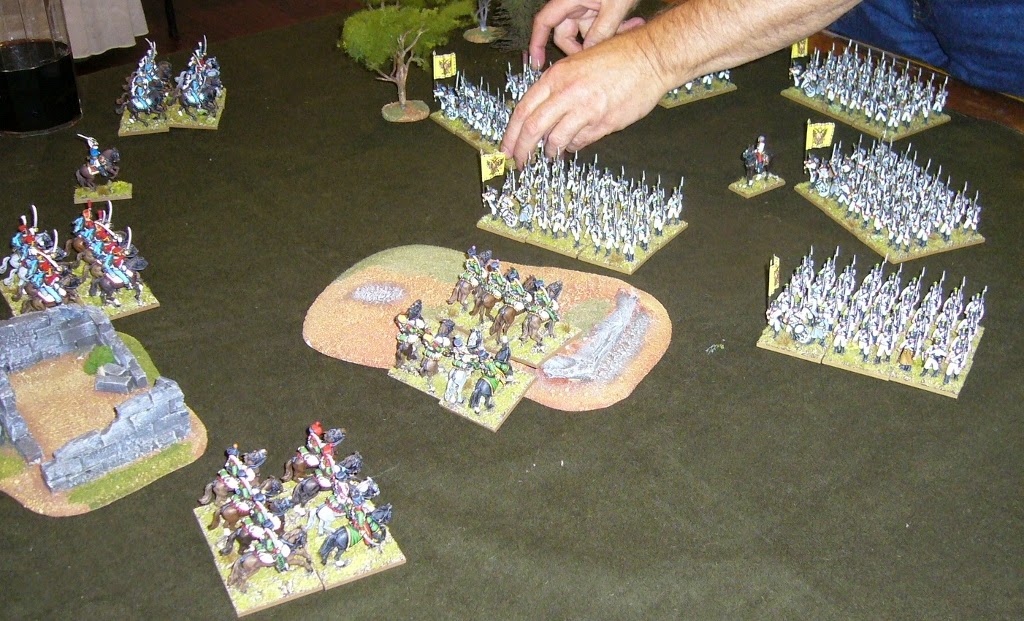 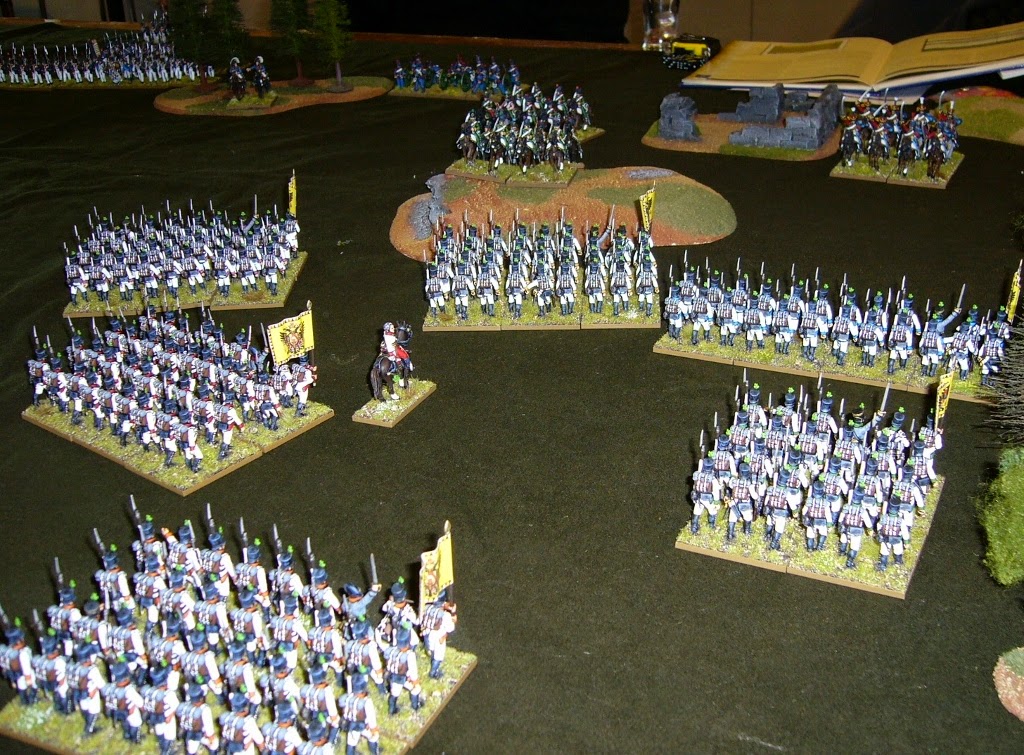 Austrian Artillery bombard the French centre causing some confusion. The Landwehr start taking some disruption from the French artillery in turn. 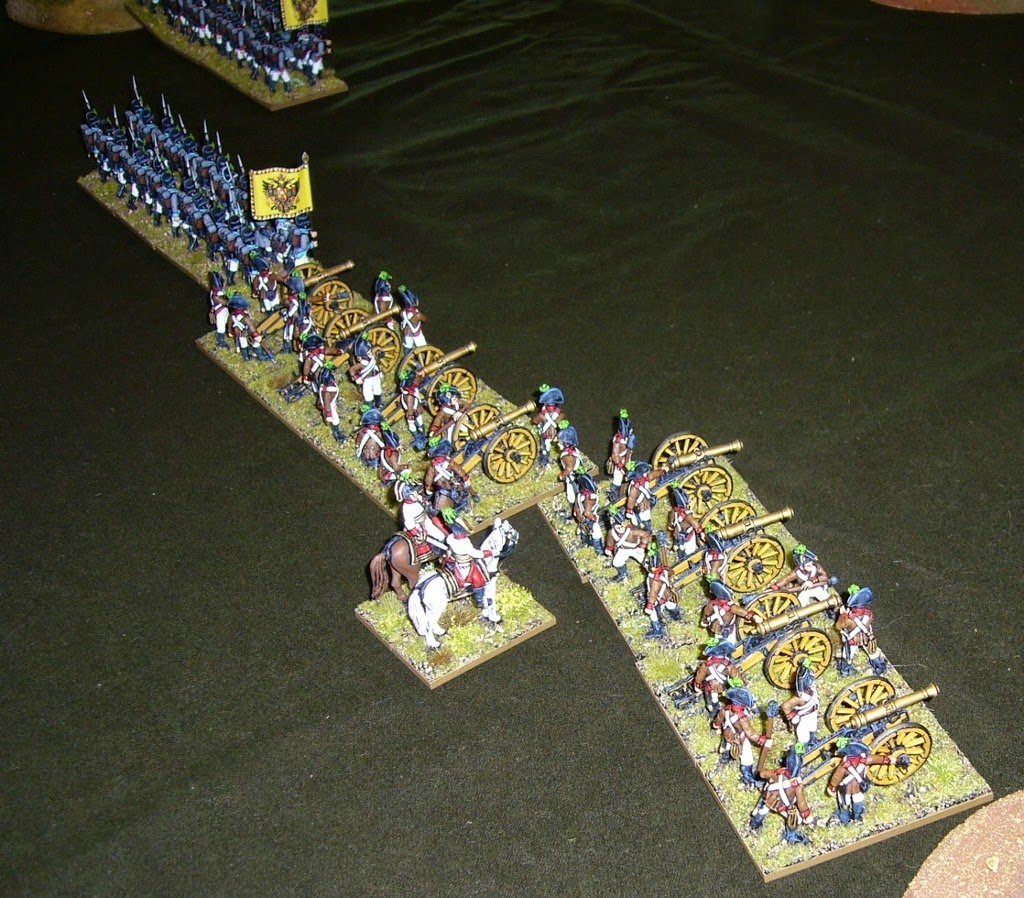 The French Cuirassiers arrive first, and advance on the startled Landwehr. 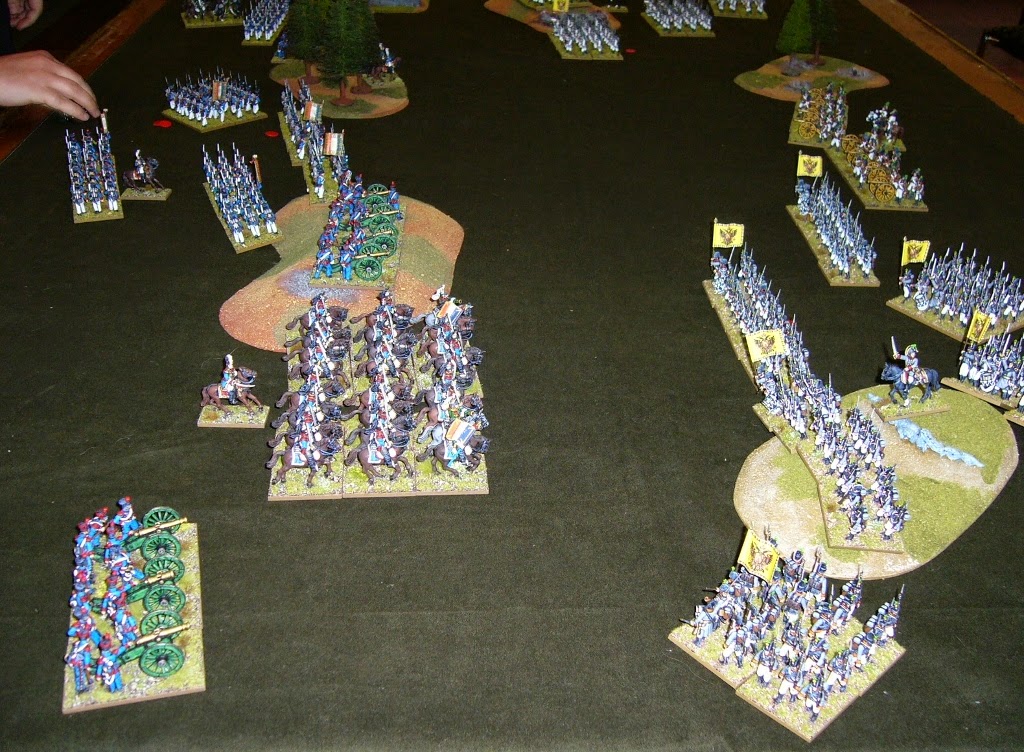 Meanwhile on the French left flank Andy reinforces with some infantry. 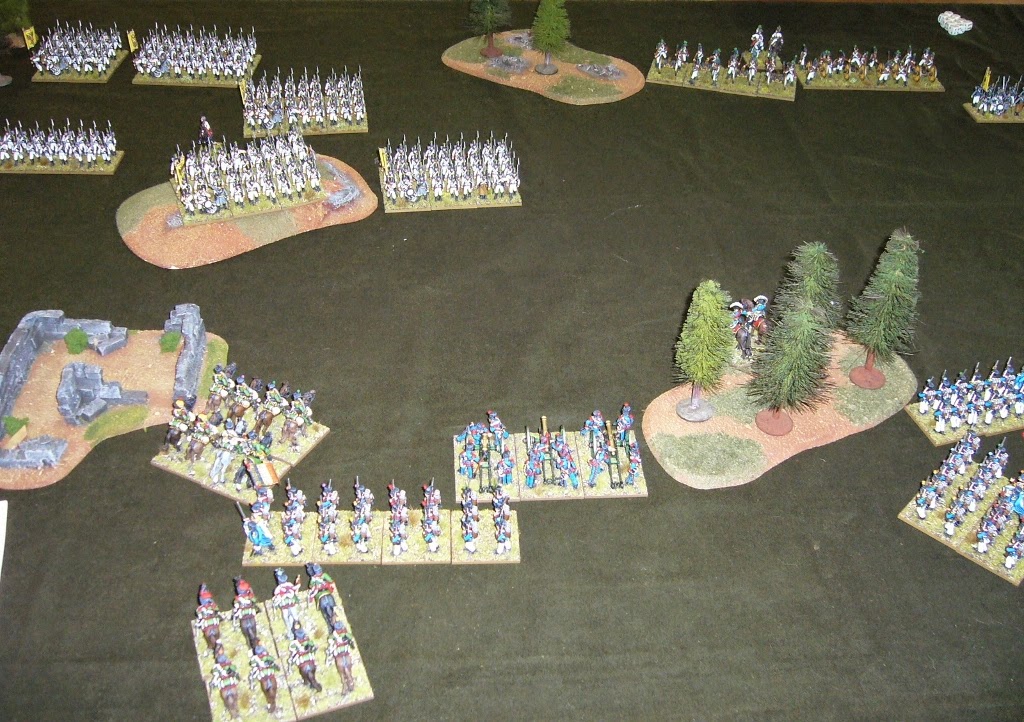 The Landwehr start to form some squares, though one is very disrupted by artillery fire. [Units can take 3 disruption (5 for large units), and break (removed from play) if they take more.] 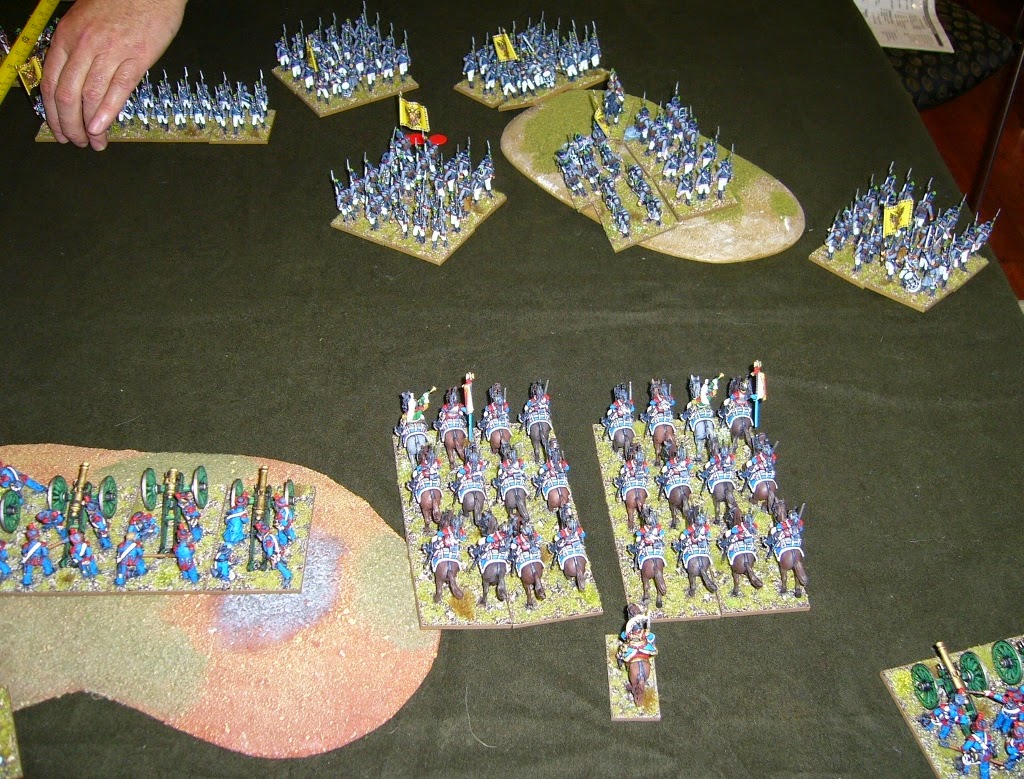 The Cuirassiers charge the disrupted square and it breaks! [In hindsight this was done a little wrong though the result would probably have been the same!] 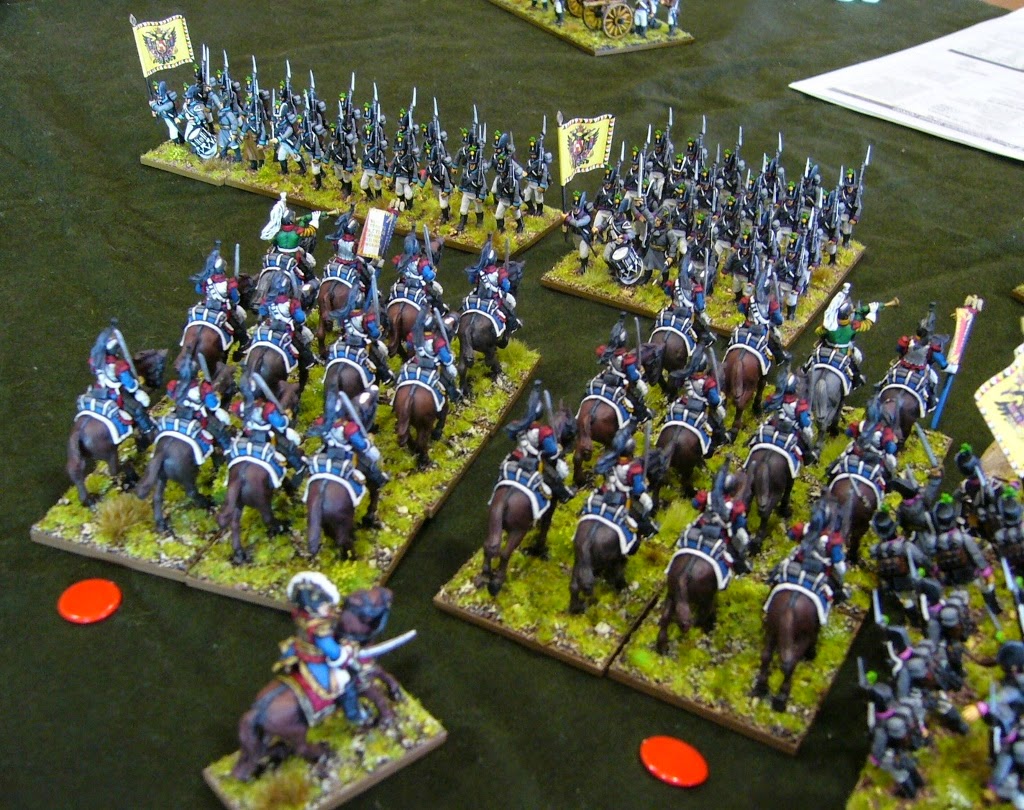 On the French left flank the French Chasseurs and a Line Infantry regiment prepare to hold the Austrian onslaught, while the Horse Artillery limbers up and retreats. The Austrian Cuirassiers arrive and advance behind their infantry.

The French Cuirassiers continue the charge hitting two more Landwehr units - which both fail to form square in time! [Amateur have a lower chance to form square than Experienced units - and thanks to Tony in comments below for the clarification!]. One Landwehr unit is run down, but the other by some miracle holds and then forms square before the Cuirassiers can realise their mistake. Curaissiers must have lost impetus to a volley or something...! 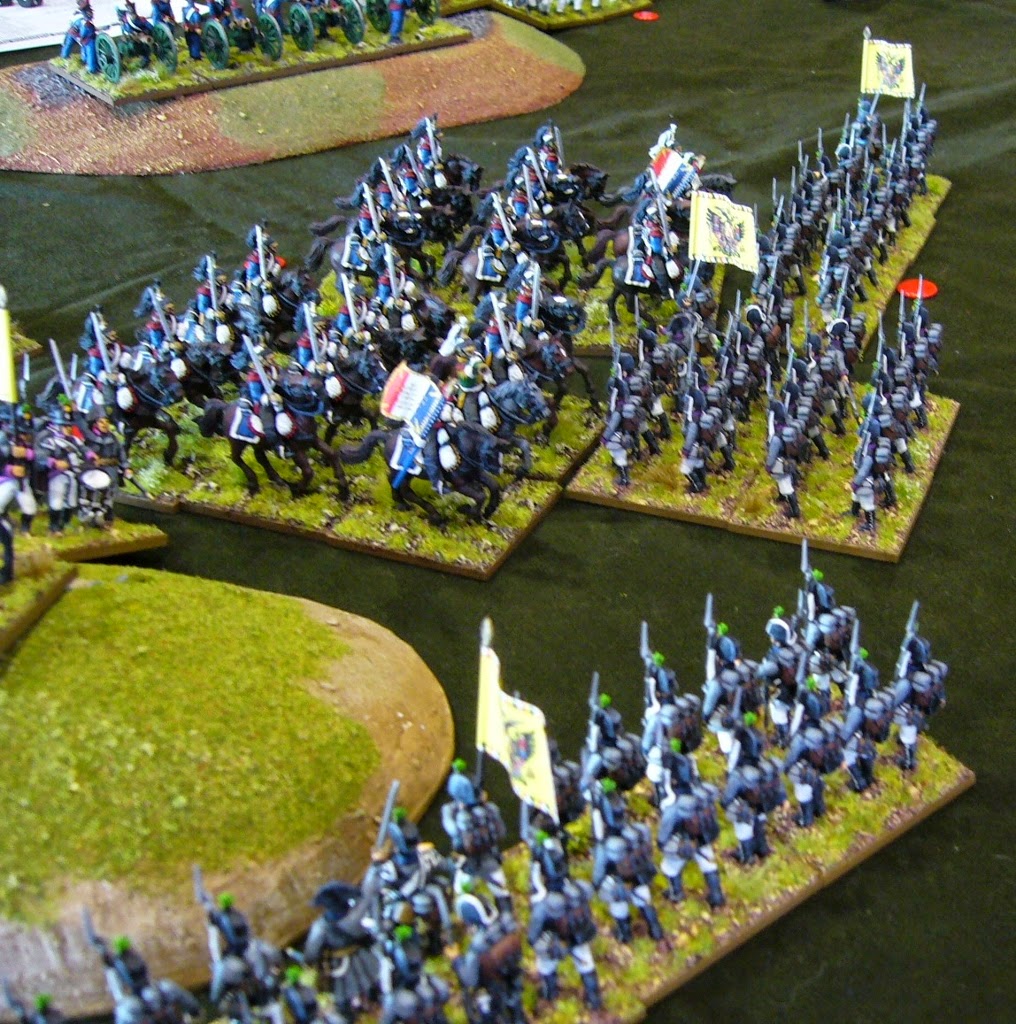 The Austrians charge the French left flank infantry, and the supporting French Chasseurs countercharge in support, helping to force back the first Austrian assault. Meanwhile the poor old Landwehr are trapped in squares while French foot and horse artillery blasts them with cannister... 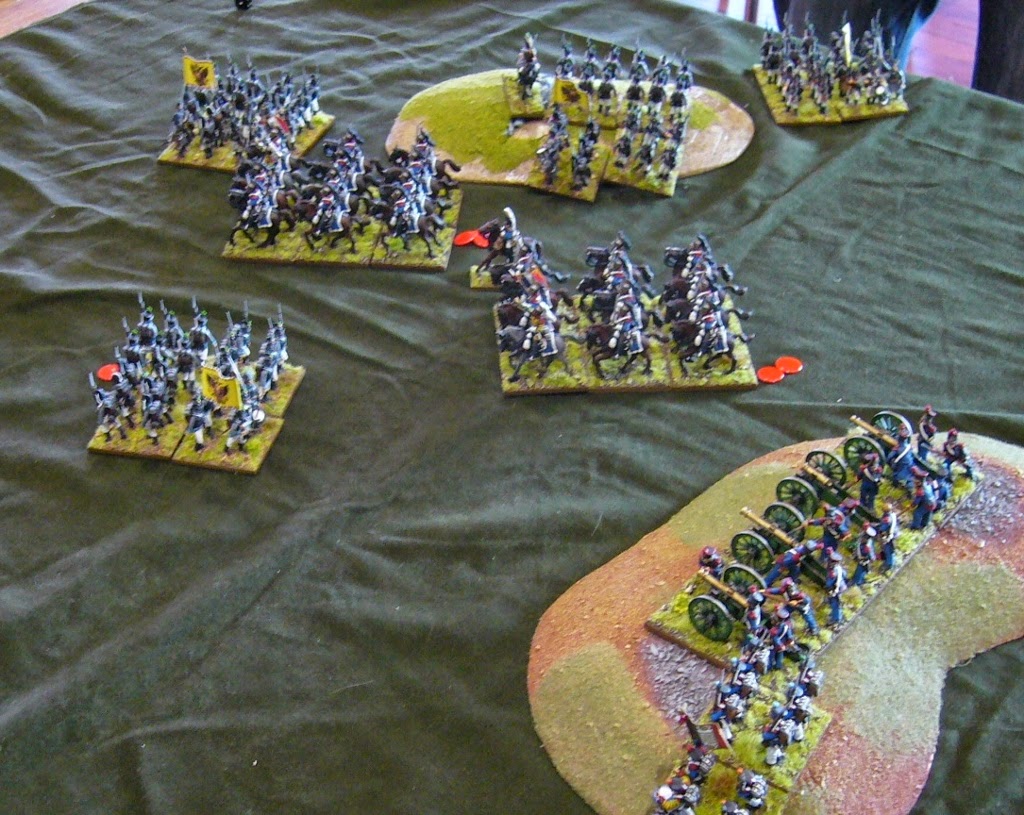 The French counterattack the Austrians on the left flank but are forced back in disorder. The Austrians smash through in the central woods, breaking a French infantry unit that was defending this, and the French infantry on their left also breaks from musket fire. 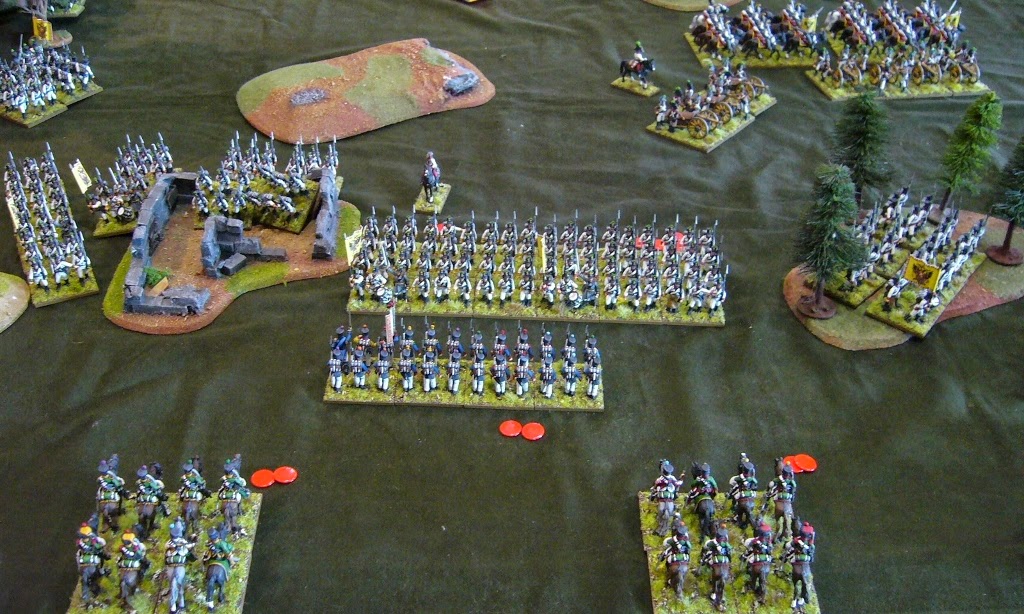 However the Austrians have also been taking hits, and one of the big Austrian units finally breaks as musketry and cannister takes its toll. Landwehr units still trapped in squares by roaming Cuirassiers are falling to pieces under cannister fire, while the French Cuirassiers struggle to recover some order. 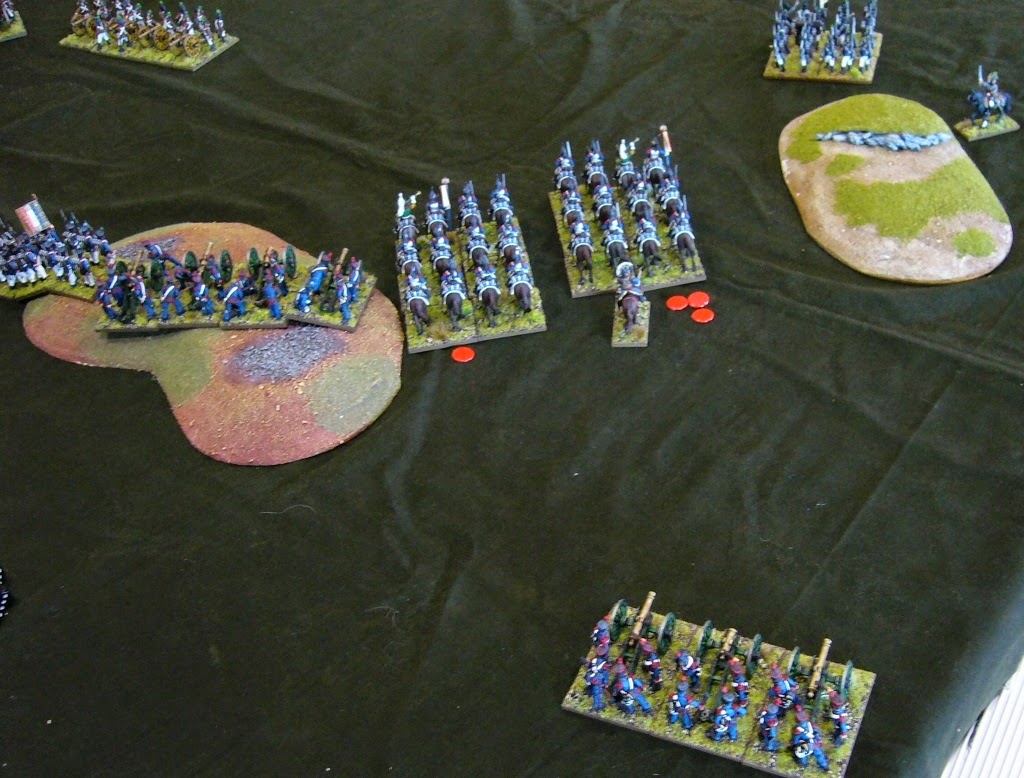 Only one Landwehr unit left! The Austrian Cuirassiers which had been coming over to help, turn around and head back the other way as French Hussars have snuck in behind them! 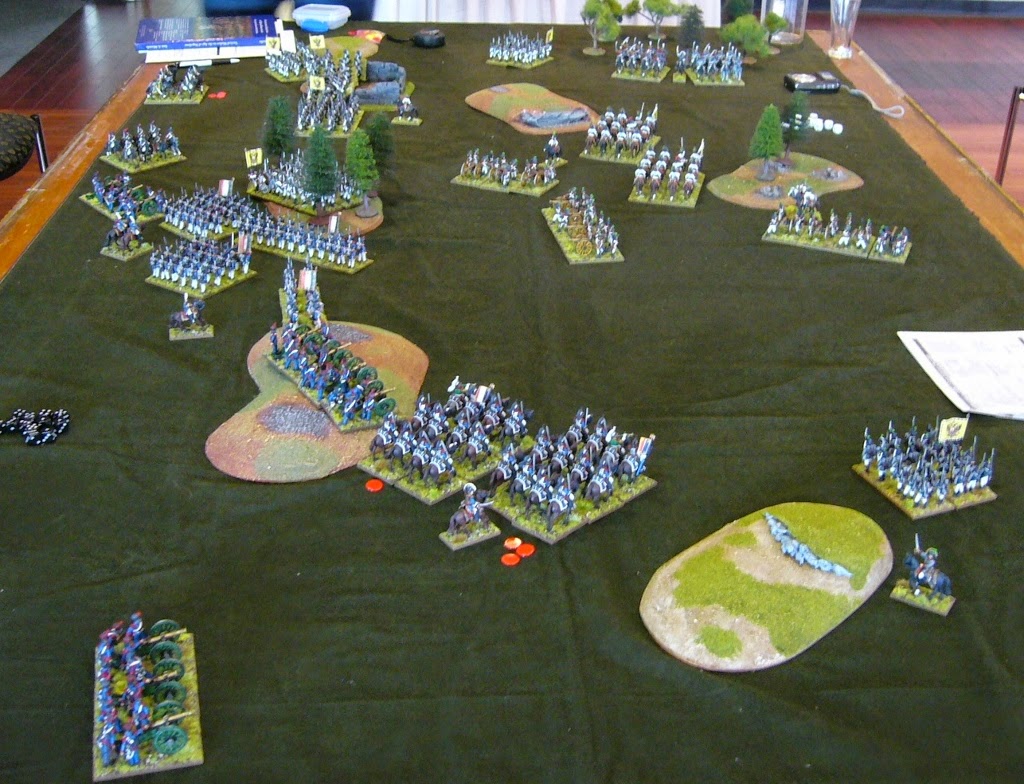 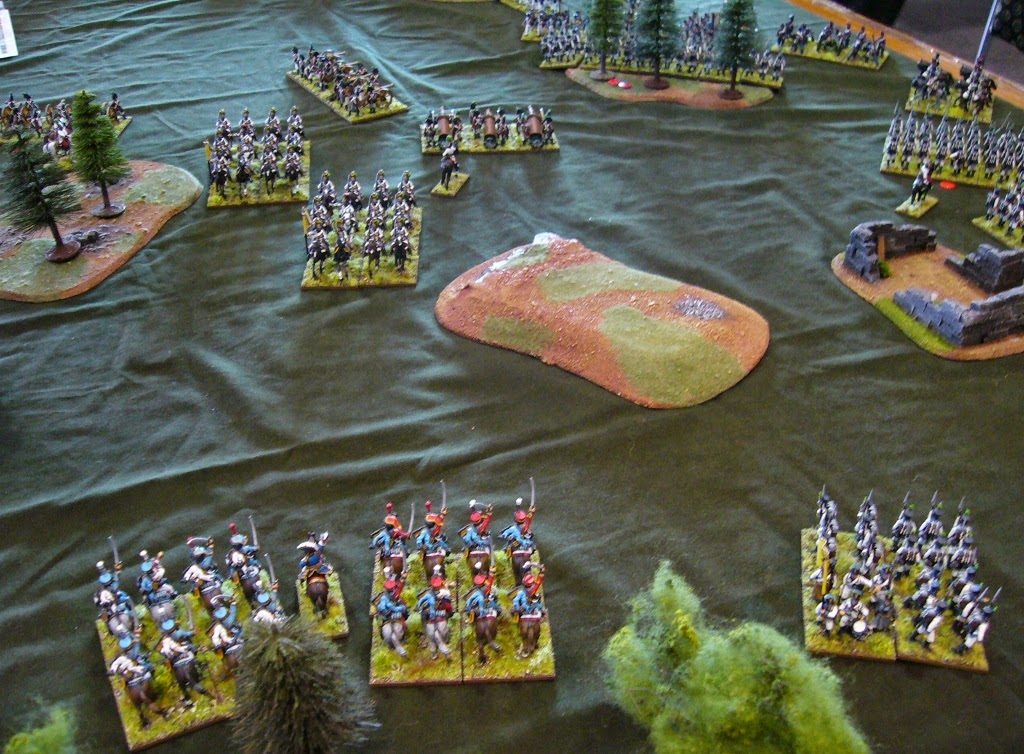 A combined assault on the Austrians in the woods breaks them, and the Austrian army has had enough, and begins to quit the field. Victory to the French! 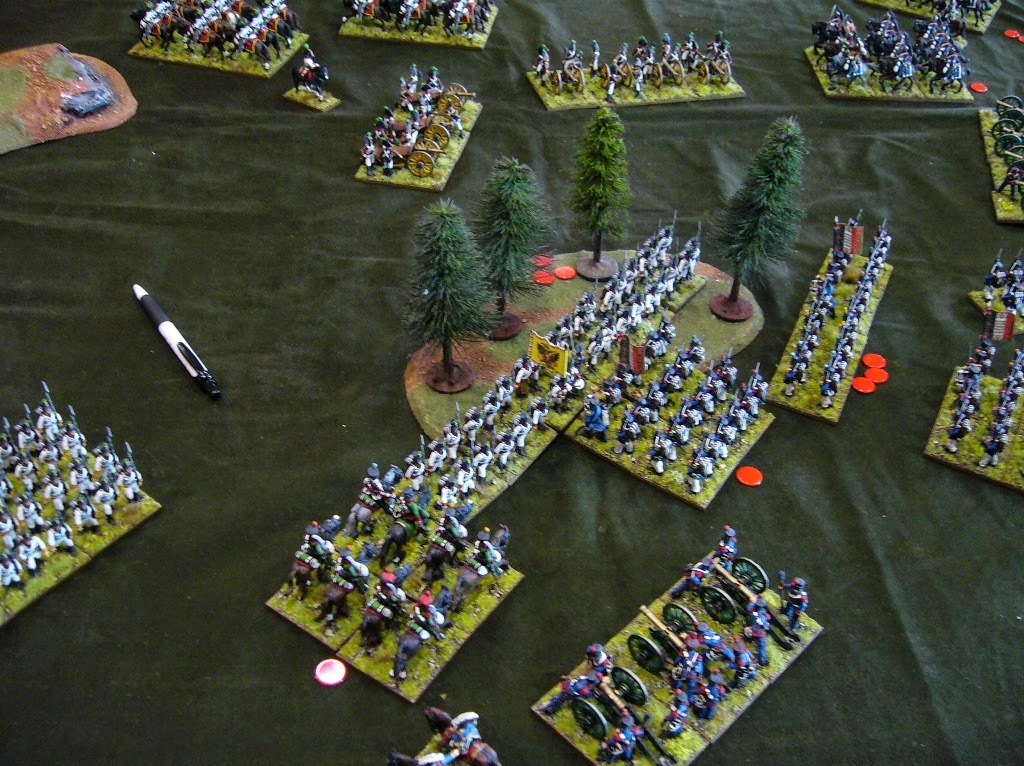 Well a game full of action! The combined French Artillery and Cavalry assault on the Landwehr proved deadly, and the Austrian successes attacking the French left came too late. The French Light Cavalry danced about effectively, while the Austrian Cuirassiers never really saw action and this proved costly for the Austrian cause. Ion decided in hindsight that he should have brought them on to support his left flank.

Anyway a good game for learning the rules! Which I think I am finally getting to grips with, as last game no cavalry saw action, and I also identified a few other errors in that first playthrough.

Also, I must make some proper casualty bases, and think about getting some sort of better cloth for away games at clubs. A shame GW doesn't make the old cloths anymore, does anyone know if there is a comparable product available? Best I can see is probably these Deepcut Studios Plains Mat?
Posted by Chasseur at 14:05