First of my Polish infantry. As the title says - Polish Vistula Legion from Murawski miniatures. I love these guys! Great uniform, and a crazy rooster flag! Awesome. Quite possibly my favourite unit painted so far.

Speaking of uniform, there's a few conflicts in the sources for various details of this. I suspect there were probably quite a few changes and instances of "using what we had" at different times. No doubt they would have looked very scruffy on campaign most of the time too, but I prefer parade ground look with my Napoleonics. So after a few headaches trying to sort it out I went with the following as a reasonable enough representation. 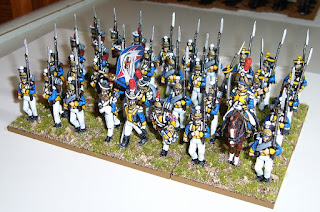 You'll note I've also painted them up as a regiment of 36, rather than my previous 24's. I've decided to start switching to this for a few reasons. I think it looks better to have more figures and a few other people here play General de Brigade which is at this 1-20 scale. Also it suits these 'French' style organisations to have one complete company of six figures on each base. 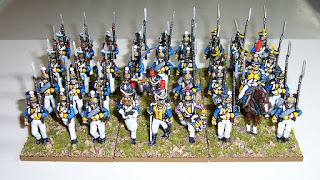 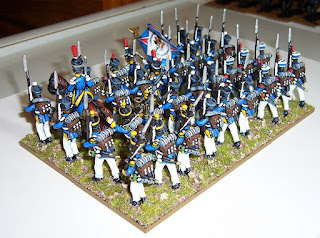 The only quibble I have with the figures themselves is the eagle bearer - who is leaning forward holding the eagle at about a 45 degree angle. The whole point of wanting march attack poses is that they don't jam each other or the enemy with pointy out bits so not sure why they made the eagle bearer doing this! I've stuck him in a second rank so the standard doesn't get in the way though and that worked ok. 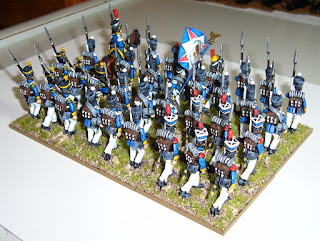 Speaking of flags this is a 75% size photocopy of the GMB flag, which was too big for my liking. I know there is the argument that "people were shorter in 1800" but I prefer flags that are not so unwieldy looking and I think the GMB flags are still a bit oversize even if you allow for people being shorter. (Edit - checking forums I see GMB offers smaller size flags by special request if you do want them). 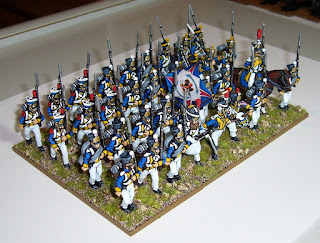 Lastly a couple of photos to show the Grenadier and Voltigeur companies who are hidden in the above pictures. Grenadiers have the Czapka shako, and a cornet player is included in the Voltigeurs. 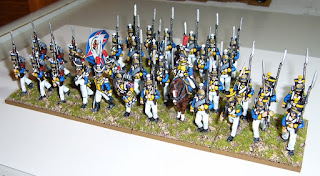