Rather long time since last update on this blog, but here's a Napoleonic Battle Report. A General d'Armee game at the wargames club today. 2000 points French vs British.


My French Force was: 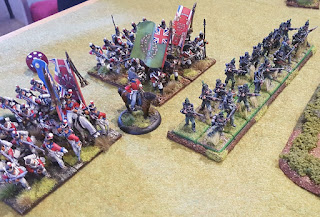 We played an encounter battle based on this nice idea posted on the GDA forum.
In summary both sides roll a D6 to see who starts. Taking turns, each side then picks one brigade and places the Brigadier where they wish that Brigade to enter the table. The Brigade is available on a D6 roll of 3-6, and immediately moves one move onto the table if so. If a 1-2 is rolled the Brigade must instead enter at that point from reserves.  (All ADC's from brigades are available from the start though, as otherwise it would be very difficult to get things on in time).


As can be seen below, the French start with just their cavalry, while the British start with two infantry Brigades. 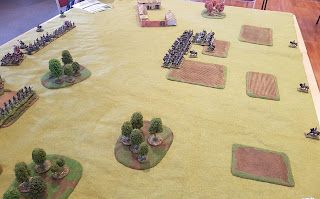 The French advance and unlimber and some first artillery fire is exchanged. 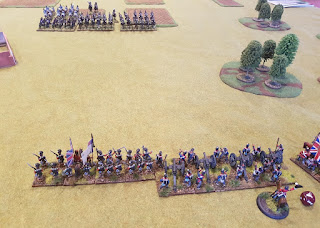 French then manage to bring on two infantry brigades, while the British wait for their reinforcements. 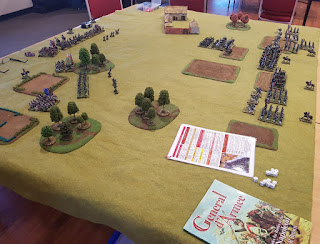 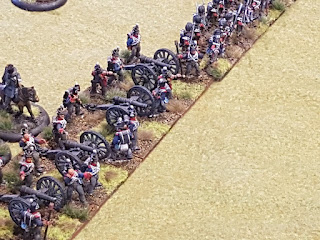 The French advance strongly on both flanks using 'Forwards' orders. 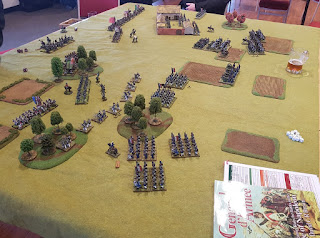 The British left flank infantry brigade finally arrives - too late to stop the French occupying the buildings in front of them though. 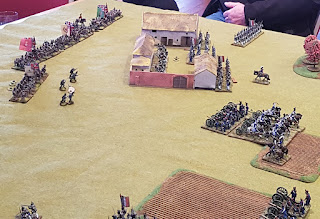 On the left the first premature French column attacks are thrown back by the British lines. And a second column attack is thrown back in rout. The French Brigade rallies but a routing batalion is lost. 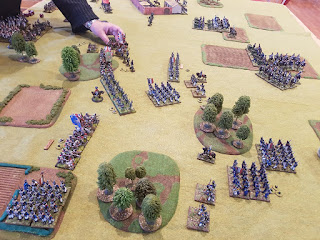 The Cuirassiers move over to support the faltering attack on the French left flank. 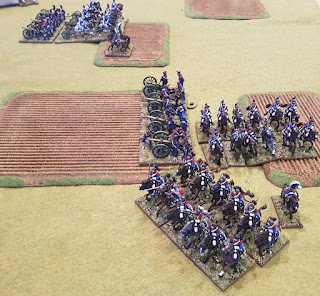 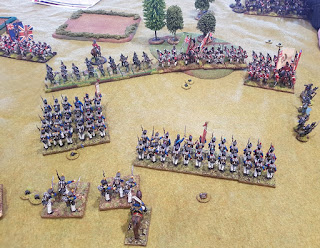 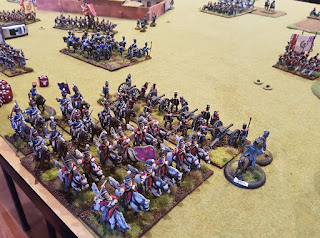 Picton waves his umbrella grumpily as they reinforce the right flank, while the Royal Horse Artillery deploys to the left of the foot artillery. 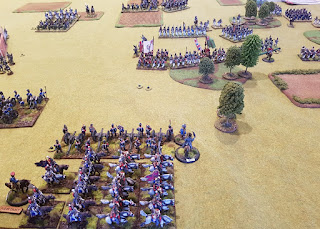 British attack column comes on in the same old style vs the French line... (wait what?) 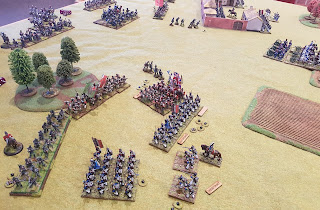 ...and wrecks the French line which disperses. 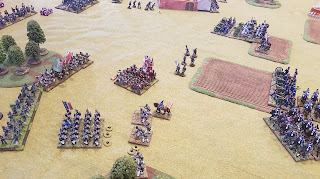 The Cuirassiers seek vengeance, charging the British column which fails to form square and becomes unformed, but still manages to hold as the Cuirassiers charge home. A melee ensues.

So 4 dice (Brits) to 9 dice (French) each needing 4, 5 or 6 on a D6 to cause a hit. The British get 2 hits while the  French roll poorly and get just 3 hits.  A win by 1 hit to the Cuirassiers which is enough to send the British unit retreating back, but disappointingly also just 1 hit off the Cuirassiers simply running the Brits down as they deserve! (Infantry beaten by 2 or more hits by Cavalry disperse and are removed from the battle). 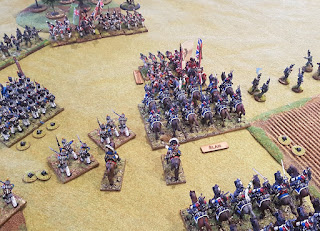 The first Curaissiers fall back and their comrades run down some skirmishers before being blasted by two batteries, taking 8 hits. 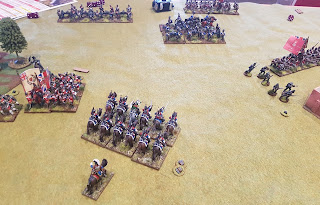 The French Horse Artillery disperse under counter-battery fire. Things are looking grim for the French as multiple brigades falter.

Three French units disperse this turn, including another from the left flank. 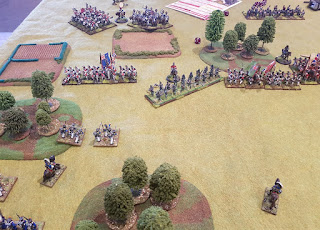 ...and another from the right flank. This right flank falls due to my mistake in forgetting that you are supposed to halve casualties against garrisons of a Built Up Area! More than just a -1 to hit. Oops, found this in checking rules after the game, that will teach me to remember! 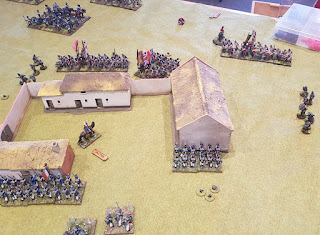 Lucky day for these British. 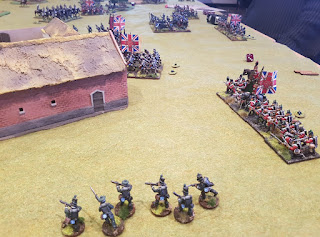 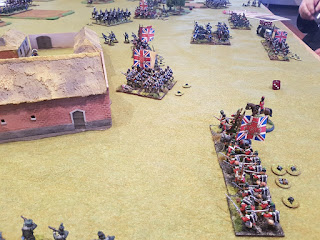 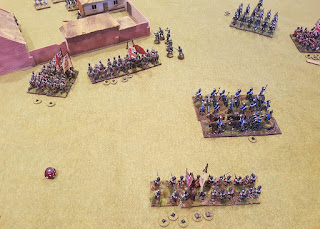 British right flank has also taken a beating. Infantry units from left to right have taken 10, 2, 8 (rifles), and 7 out of 12 hits each respectively.  Three of the five French battalions on this flank have been lost entirely though so the French are considerably worse off! 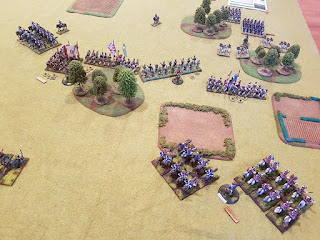 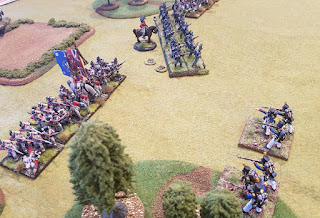 Time to withdraw and reconsider the treachery of perfidious Albion! 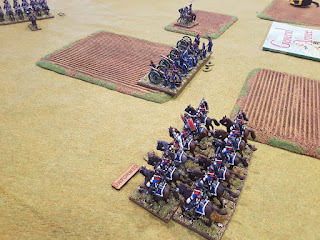 Some premature charges by the infantry on the left lost this game for the French. I had weight of numbers and should have just waited for more attrition from skirmishers before sending in the columns at least! That and my failure to get rules correct for defensive bonus of the buildings on my right flank. Oh well next time!  I think 2000 points is about the minimum for game of GDA, but even this limited number of figures still gives a fun game! Mike and I are doing a display game for an antique weapons club next month so I'll do another report from that.

Thanks for reading! In other news, I bought a tonne more Napoleonic figures just before the Perry price rise on April 2nd, and some of them are currently on the painting table. Prior to that I also painted up an Ancients Republican Roman army, so some pictures of that will likely also feature shortly.
Posted by Chasseur at 21:38