After previous posts on painting infantry and horses I thought I'd add another on assembling and painting Napoleonic artillery.  I'll use the Perry Austrian Artillery as the example, as they also involve some more complexity than other artillery pieces (well the cavalry guns anyway!).

First off I should say a huge thank you to Dmitry who has this very helpful series of blog posts about the Perry Napoleonic Austrian Artillery (there's a translate option on the bottom right in his sidebar). This is great for reference and I found it invaluable  in understanding what I was looking at with these models. It is also worth noting that the technique he uses there for assembly and painting is an excellent choice. Dmitry chose to paint before assembly, whereas I have decided to assemble everything except the barrel of the guns prior to painting. In addition he painted the woodwork first (my usual approach also), whereas here I painted the metalwork first. Two quite different techniques, but both work well! I'm not sure which might be faster for you, but hopefully this post might provide a few ideas.

It's very important to clean up the artillery pieces quite carefully. Unfortunately the Perry pieces have a fair bit of flash to clean up. However once you work out where the flash tends to be located, you can get quite systematic in eliminating it. This means that while I was doing 14 guns at a time, the time spent on cleaning up the last few was much less than the time spent on the first ones. I ended up cleaning up a lot of these during my lunch break at work actually! Time is precious! Craft knife to remove the worst amount of flash, and then needle files to clean up remnants of this and mold lines. 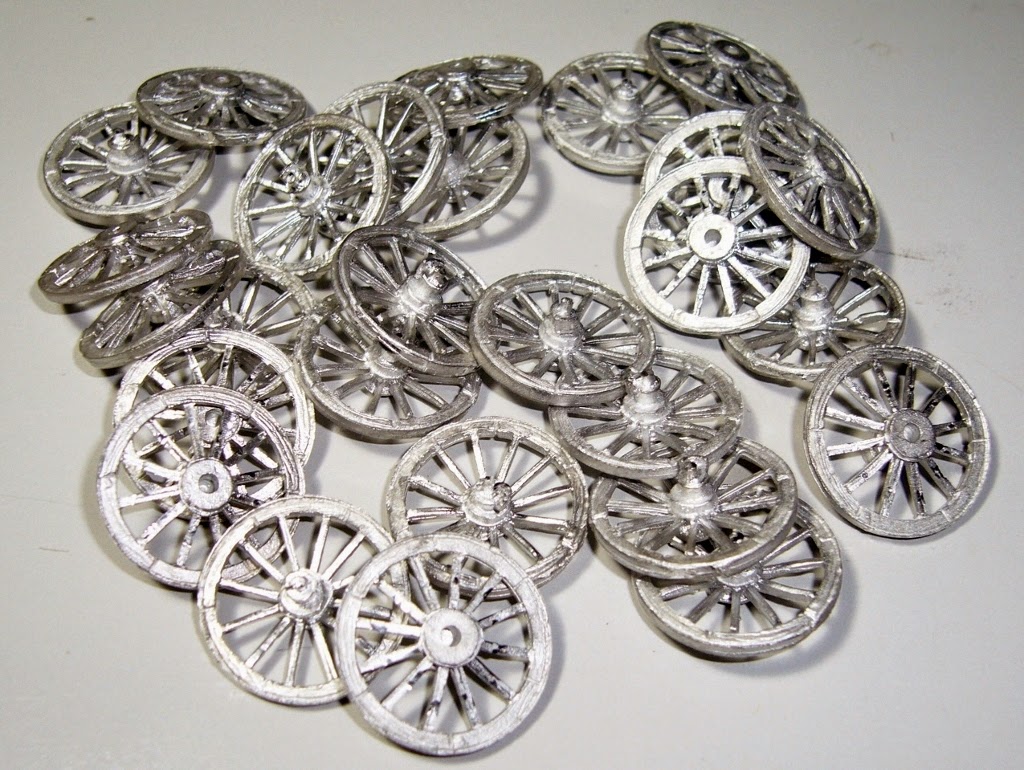 After cleanup it is on to assembling the pieces. I'm just using superglue for this, doing 8 Line Guns and 6 Cavalry guns all at the same time. Below are the boxes of various parts sorted, and the first Austrian Cavalry guns being assembled. The first step is to glue the big seat cover onto the frame. There are two nobs at the back of the gun against which it rests. Make sure you get it in position accurately. 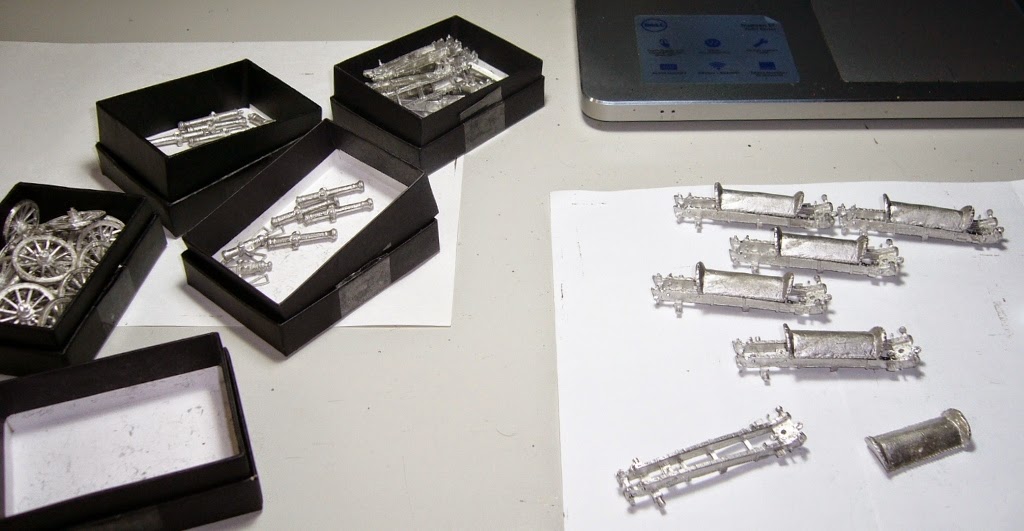 These are the parts for an Austrian Cavalry Gun... all will be revealed. 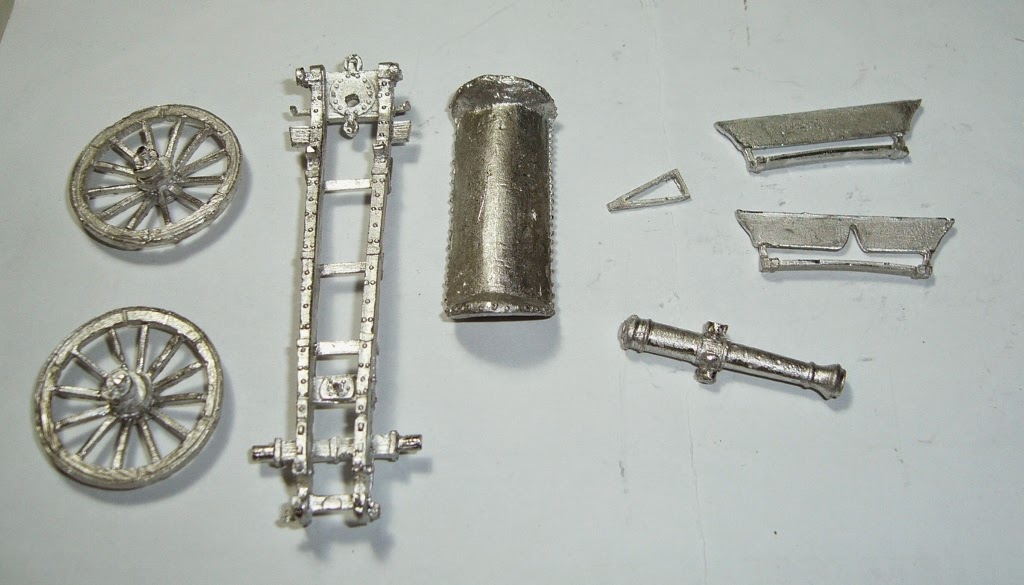 Also I noticed at this point that one of my Line Artillery barrels was missing the knob on the end. A quick repair job seemed like the easiest option here. I drilled a hole and glued a piece of paper clip into the hole, and then drilled a hole into a small piece of plastic sprue and stuck that on. Once glue was dry I filed the piece of plastic into the right shape. The picture below was taken before I finished the filing so you can see the general technique. 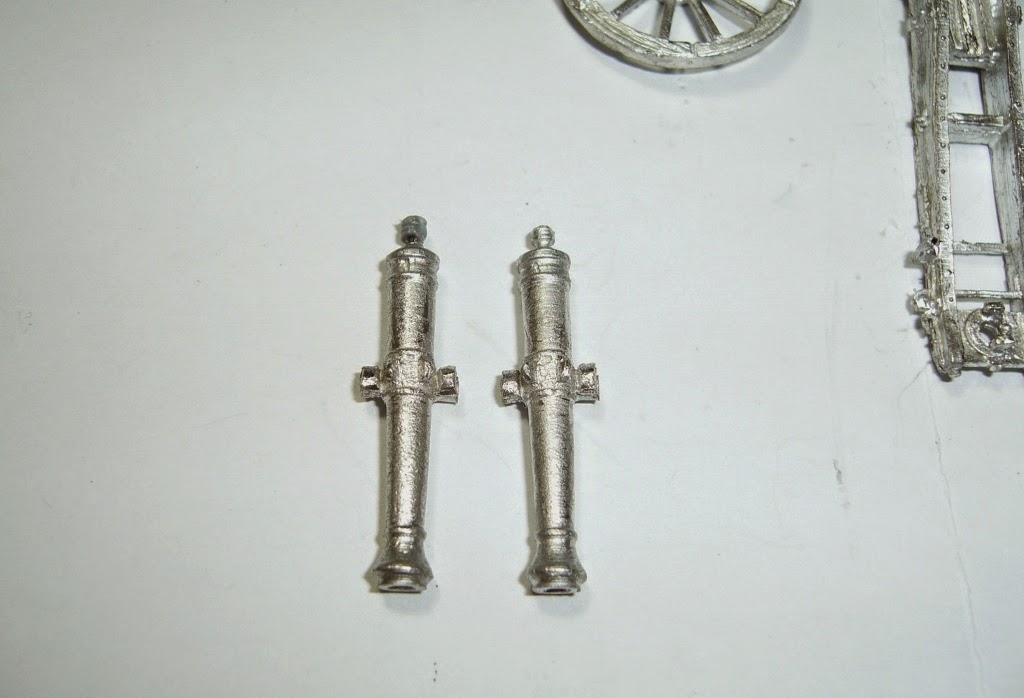 I then glue the right wheel onto all the line guns. Next I add one side of the cavalry gun seat to the cavalry guns. Make sure you get the correct side attached - there are guides on the model to help ensure this. 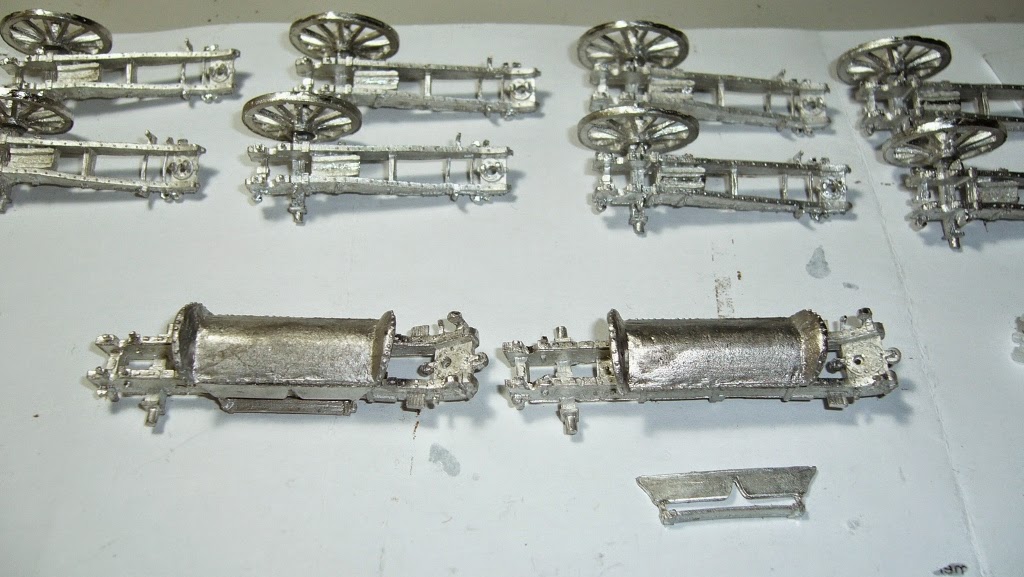 Next stage is to add the second wheel to the line artillery. The Austrian guns have better fits for the wheels onto the guns than the Perry French guns did. I just cleaned up the modelds and glued them straight on, whereas for the French guns I actually drilled and pinned the wheels with paper clips for strength as the connection didn't seem so great.

While the line artillery wheels are drying, I add the other side of the Cavalry gun seat. 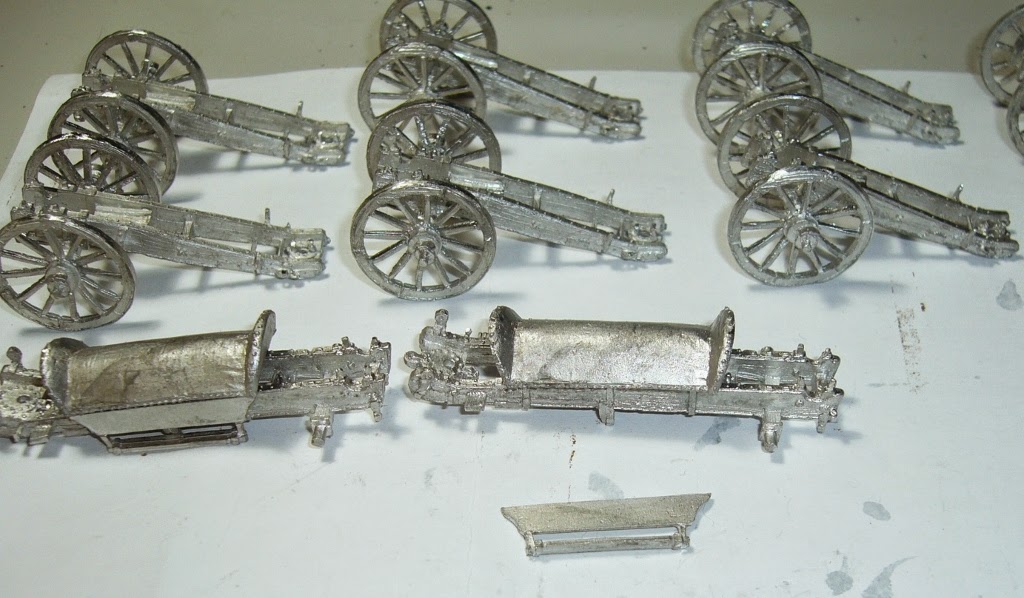 Next the barrel elevation mechanism is added to the line artillery guns - the small triangular piece with handle shown at right. 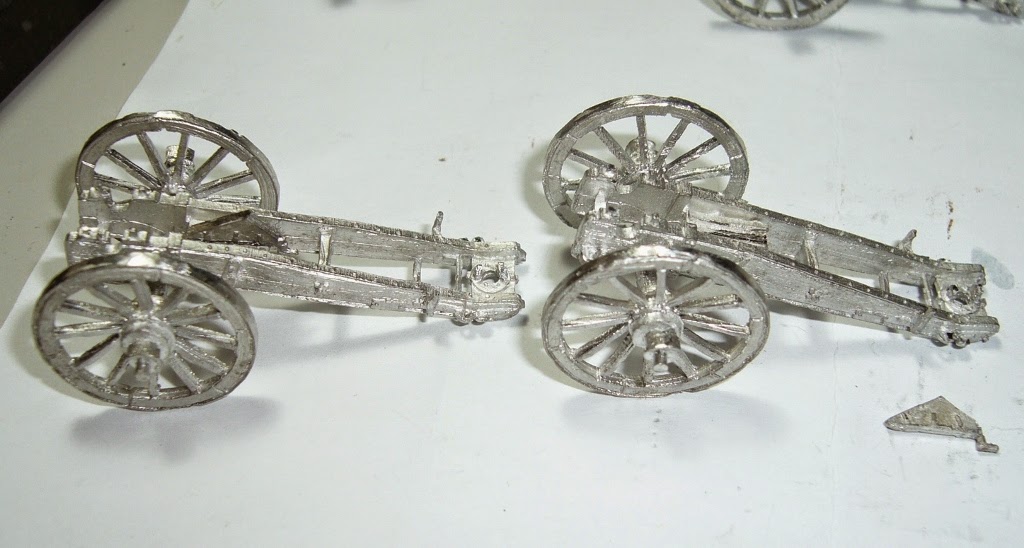 Then this small triangle to the front section of the Cavalry guns. I'm not even sure why this was bothered with as it won't be seen under the barrel... But what the heck. Tweezers needed to add this bit! 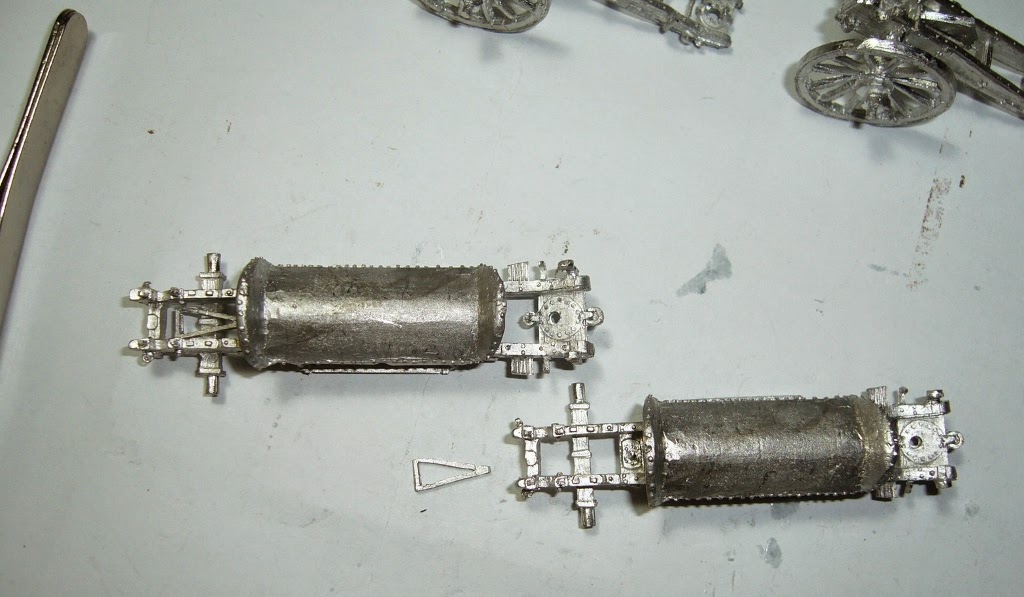 Then wheels added to the cavalry guns. One last point about wheels - try and get them straight on the axles! Guns with wonky wheels look bad! It's not necessary to get them completely straight while gluing, as after they are dry any minor deviations can be fixed by some gentle bending which the axle should accommodate. 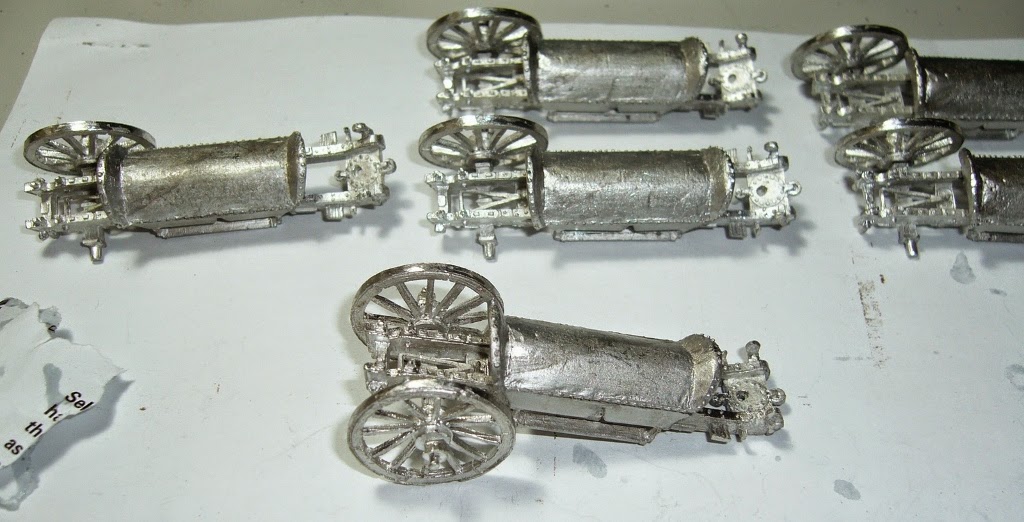 And that is the guns assembled ready for painting.

The usual way I have painted guns is to paint or spray them in the wood colour, then drybrush this with some lighter shades, and then painstakingly pick out all the metal work afterwards (which is black for most nations - for reference this is a very useful chart of Napoleonic artillery colours). This works fine, but here I decided to try a different approach - do all the metal work first, and then paint the wood colour. Why? Well I figured there is actually a LOT of black metalwork on these guns, plus I wanted black lining in places to differentiate different sections (e.g. on the spokes) As it turned out, doing it this way didn't seem any worse than the 'painting the woodwork first' approach, and was perhaps even slightly faster in this case. It wouldn't work as well if I was relying on heavy drybrushing for the woodwork though, which is the approach I often use.

So here we go with the 'black first' approach. Guns sprayed black and then highlighted with two successively lighter dark greys. Exactly the same approach used for infantry and cavalry previously. 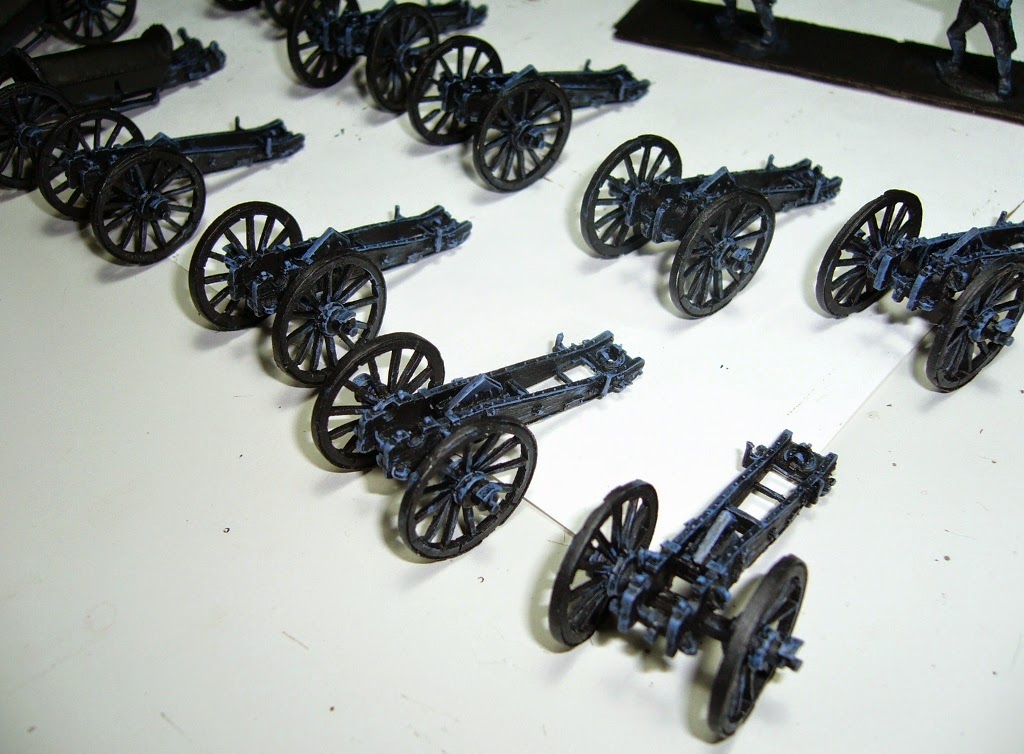 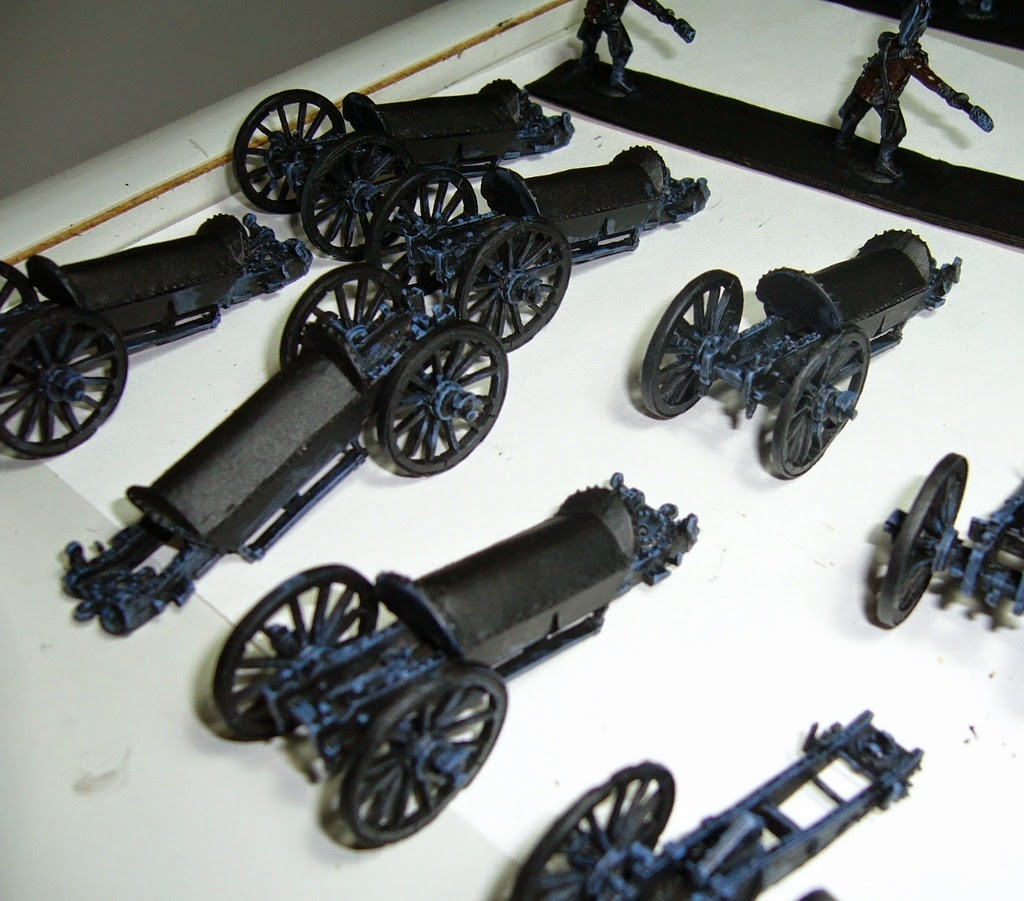 Next the colours. I'm using an old and no longer in production 'Tau-Sept Ochre' from Games Workshop, but most equivalent Ochre Colours would do I imagine. When painting try to get into a systematic approach. E.g. All spokes from one direction and then from the other, so that you need to turn the gun as few times as possible when painting. I paint the inside of one wheel and outside of another and then flip over and reverse the process. I then hold the wheel rim of one wheel and gradually turn the model while painting the side of the spokes of the opposite wheel, first one side in one direction and then the reverse. 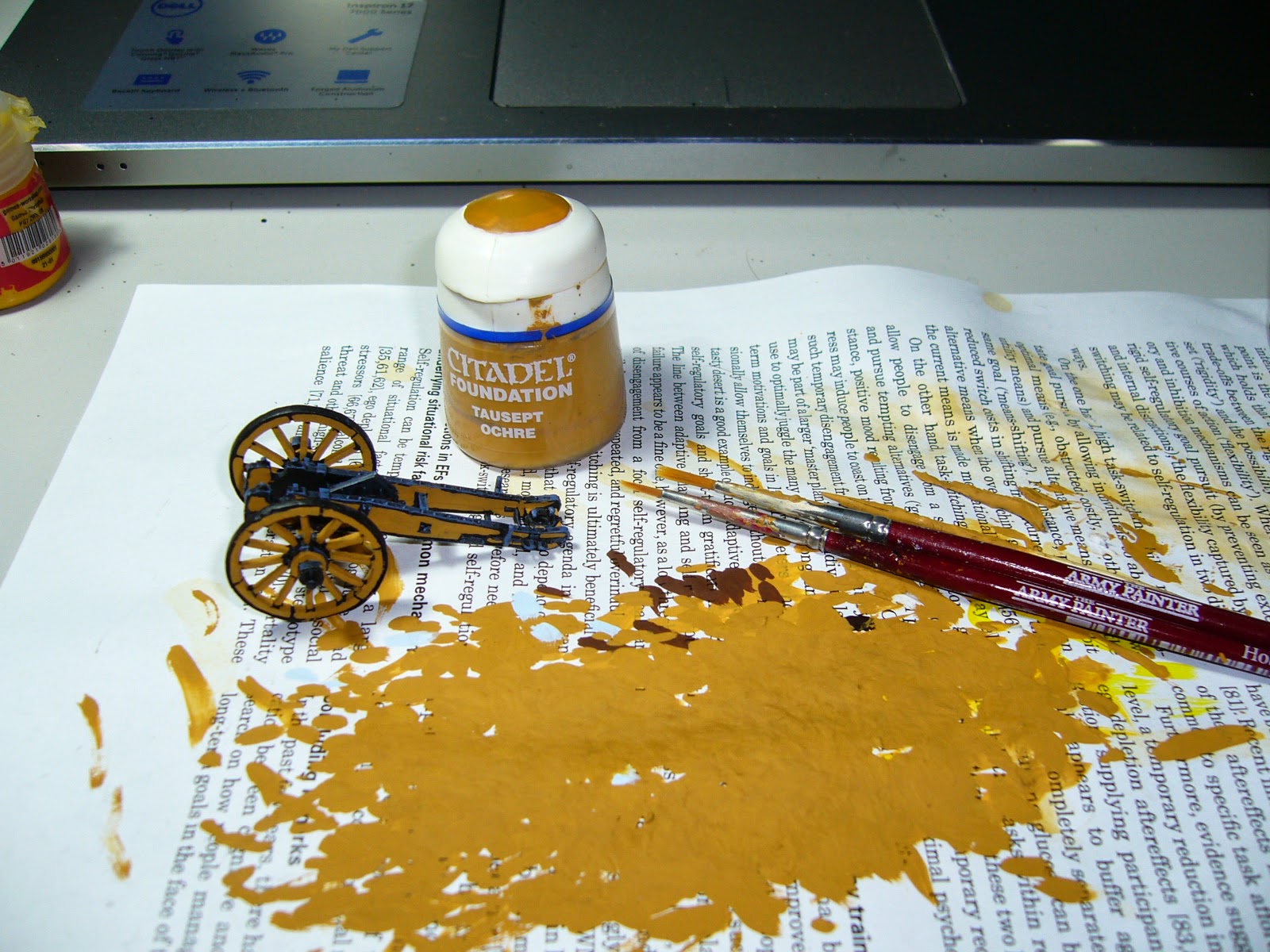 I then highlight the woodwork in places with some Averland Sunset from Games Workshop. This gives a nice bright (but not bright yellow) Ochre effect. 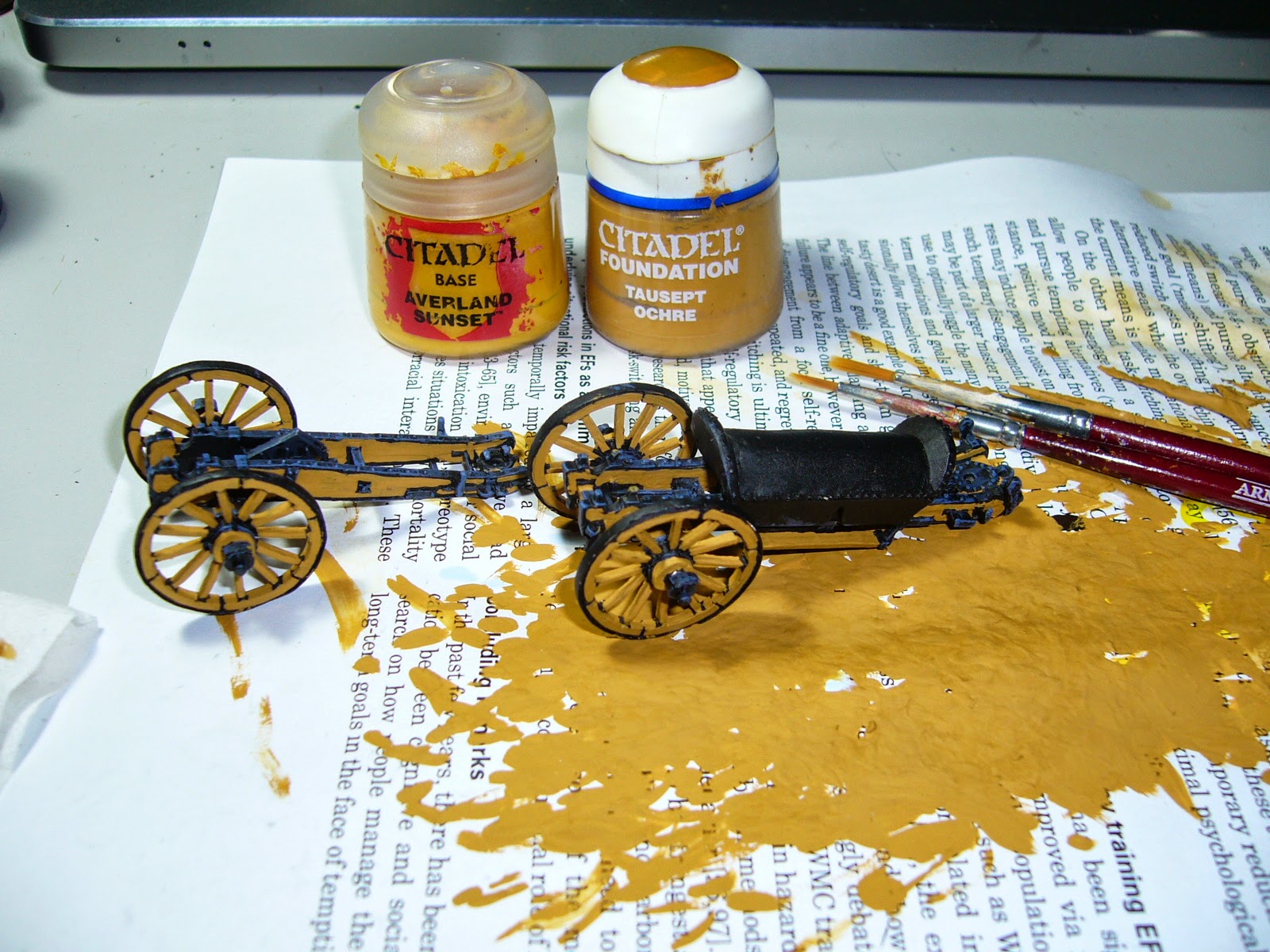 Now the barrels. If there is any part that you really should spend a lot of time in cleaning up perfectly before painting it is the barrels, as eyes will be drawn to them. First thing I do is paint the barrel mouth black, and then I coat the barrel in gold paint (Yes I know barrels were not gold, but I'm going to do a brown wash over them when they are dry). 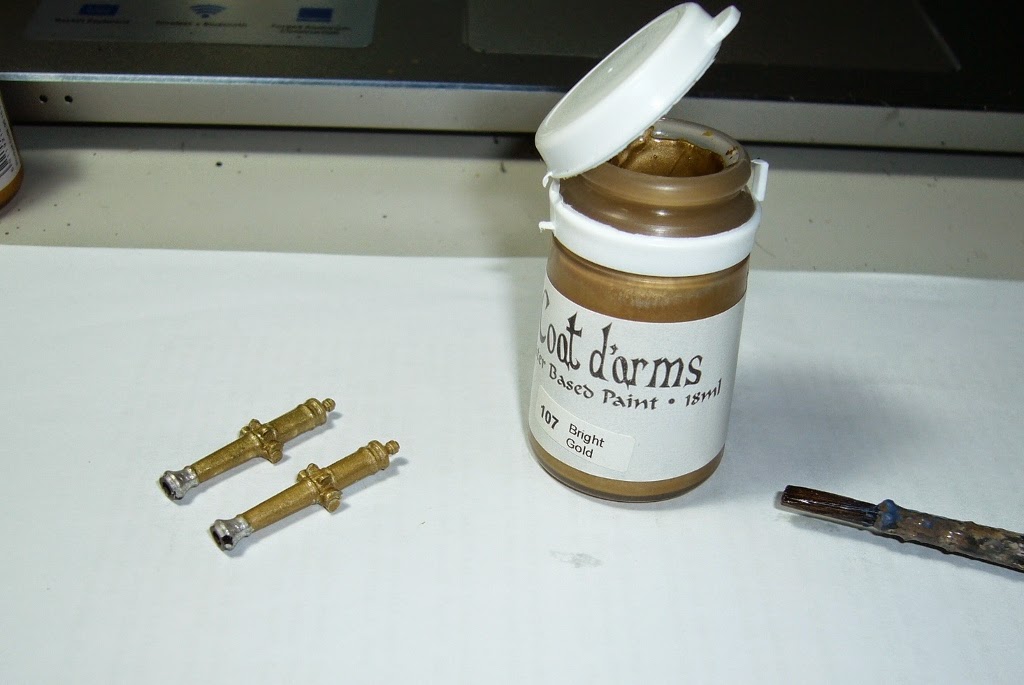 Here's all the barrels, I've painted the top side, while holding the end of the barrel and I set these to dry. 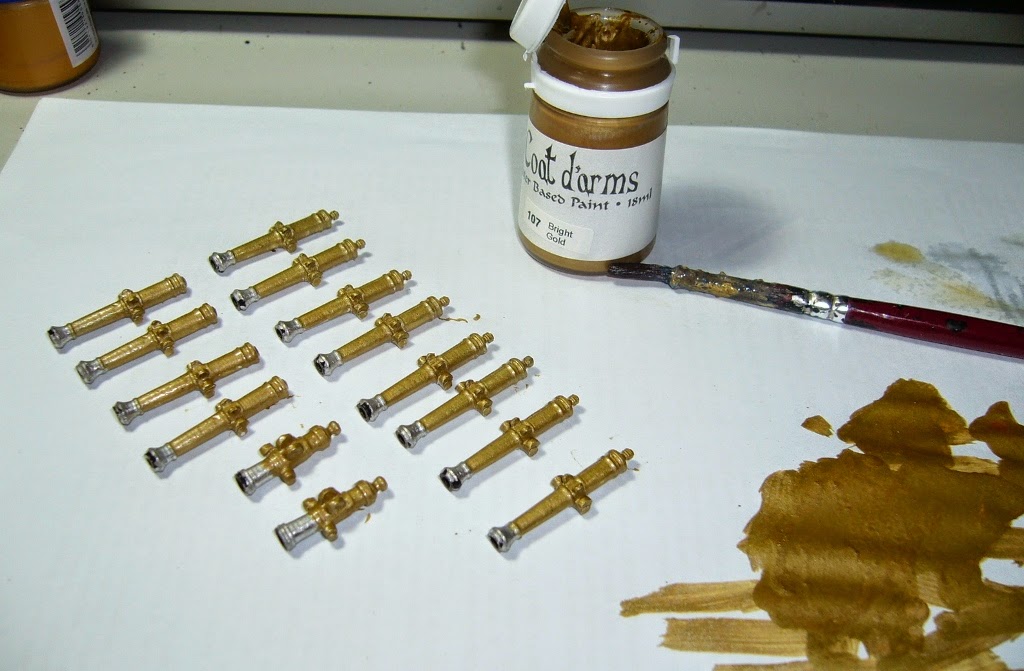 While they are drying I paint the first coat of brown onto the Cavalry gun seats. 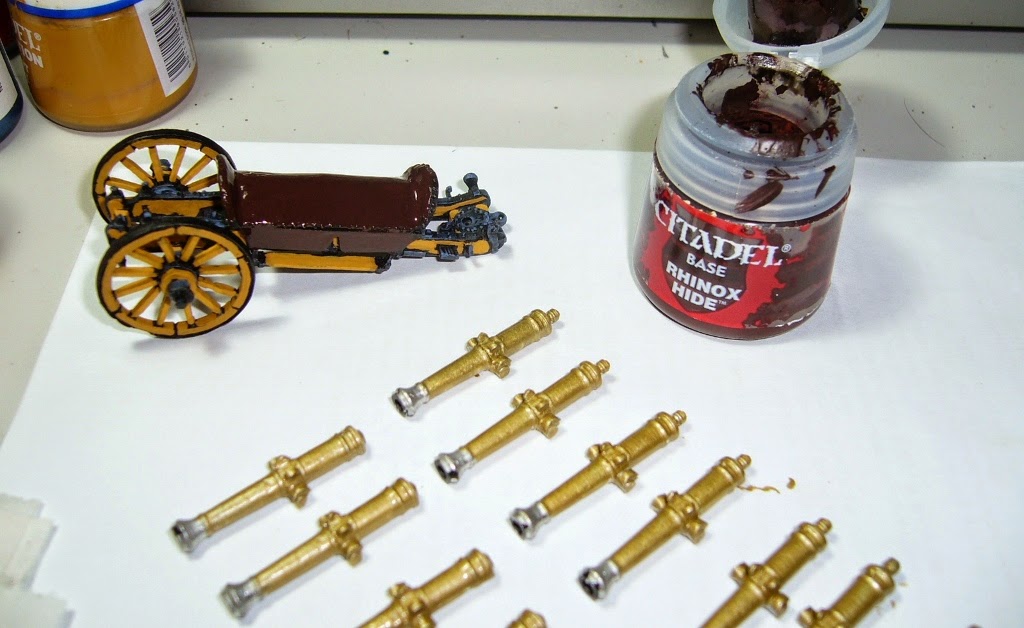 Then I add more gold to the barrels, 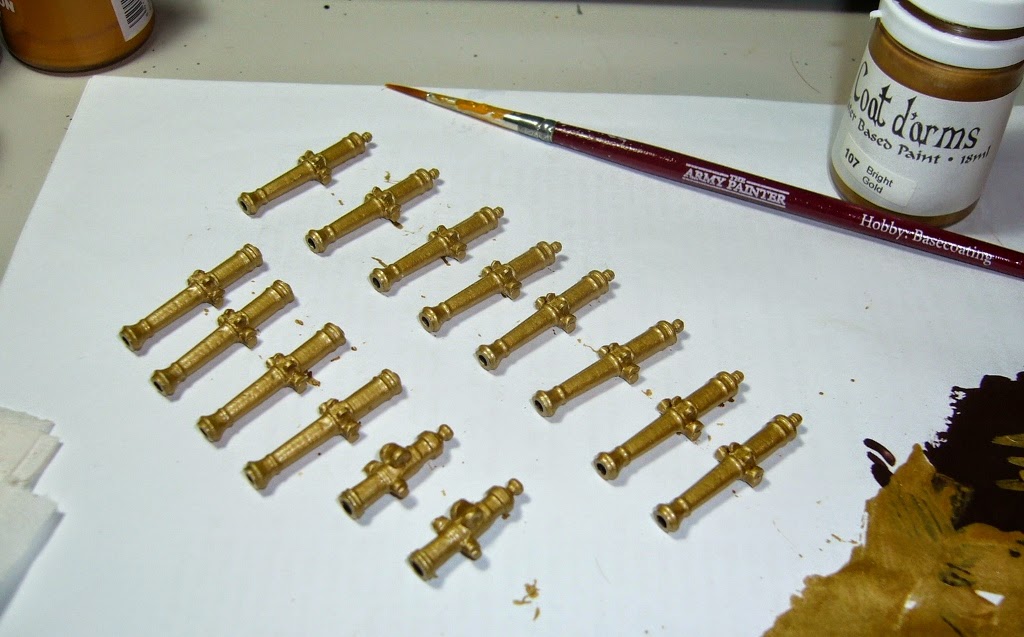 Back to the cavalry guns adding a lighter layer of brown, while gold on barrels is drying again. 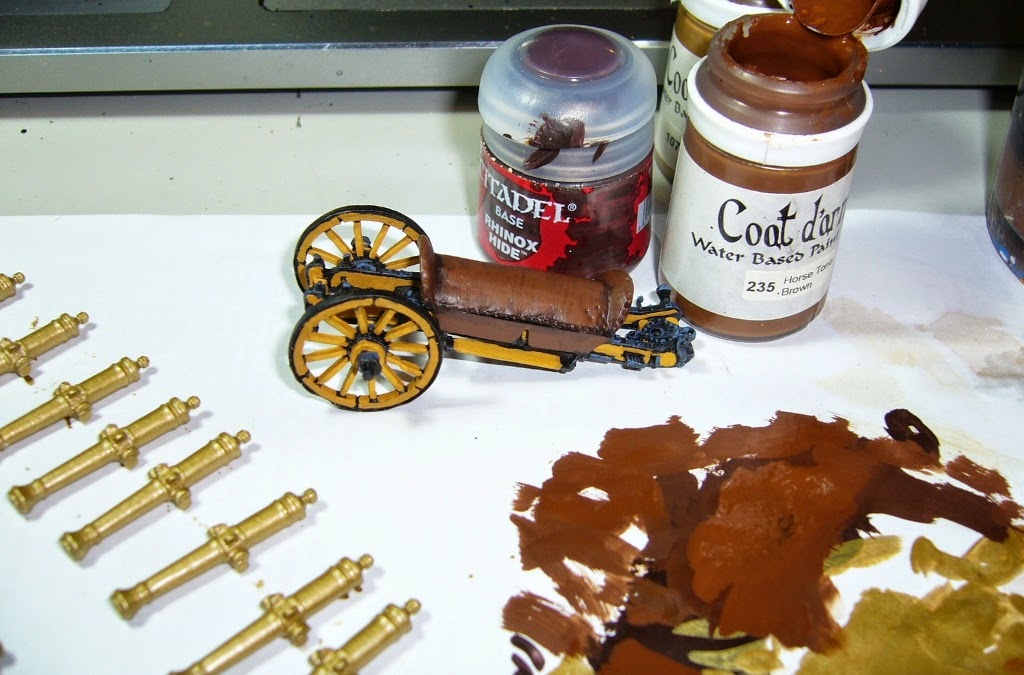 Touching up barrels again with more gold on the reverse, and then a further layer of brown to the cavalry gun seats, and also the rivets a picked out in the light brown. I'm using three successively lighter shades of brown for the cavalry gun seats as they are quite a large area and so they need a bit more depth. Mixing colours of brown too as contrast would be too much otherwise. 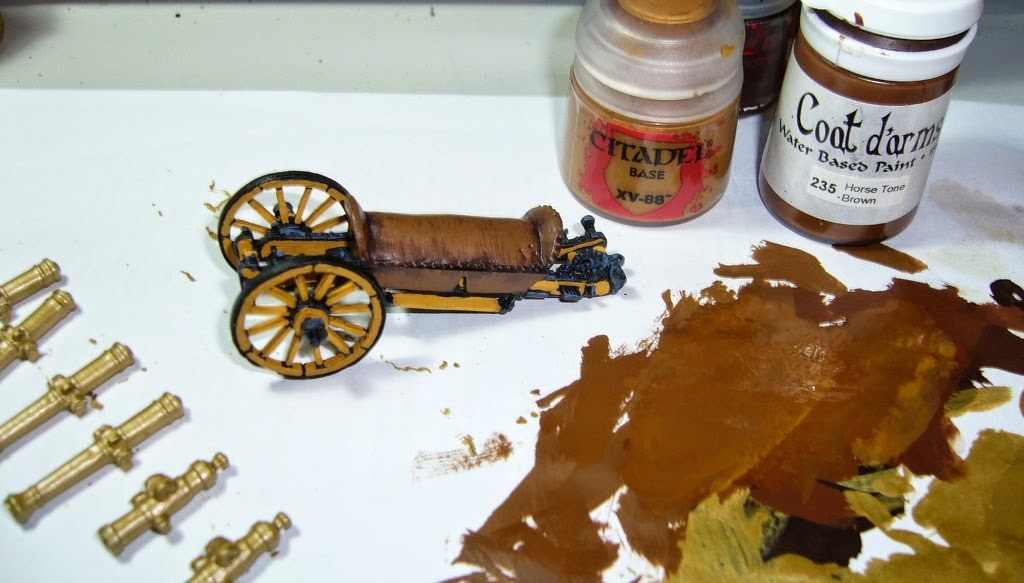 Barrels are glued on at this stage, with 5 minute epoxy glue. I use a needle file to delicately remove a small amount of paint from both the gun barrel mounting pins and the carriage where these attach. 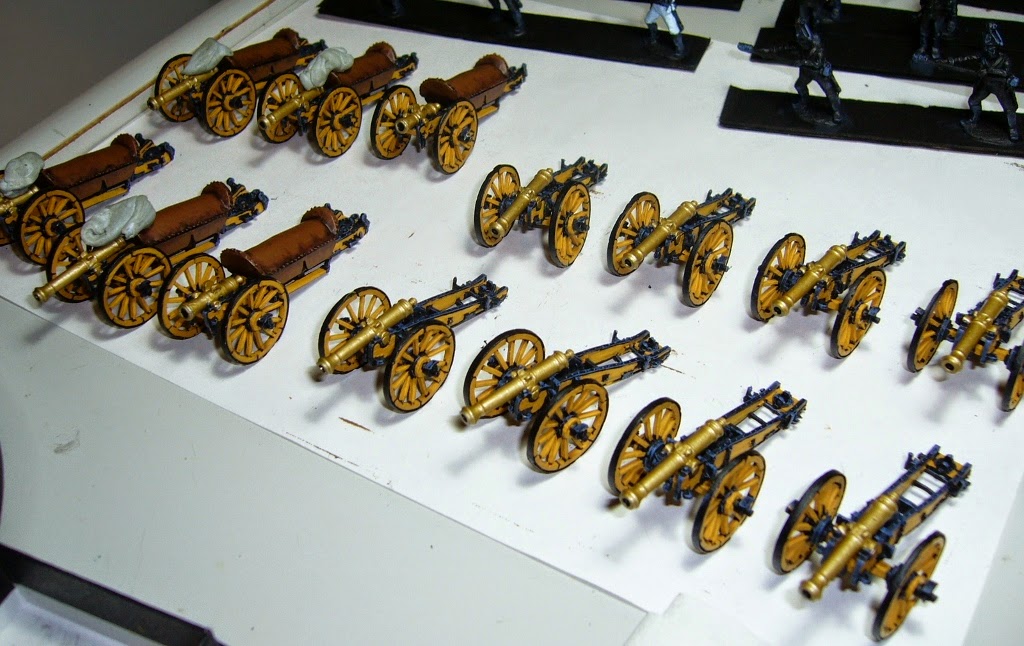 Now the gun barrels are washed with a dark brown wash. Using Devlan Mud (now called Agrax Earthshade) from Games Workshop, or Strong Tone Ink or similar from Army Painter would also be good I imagine. 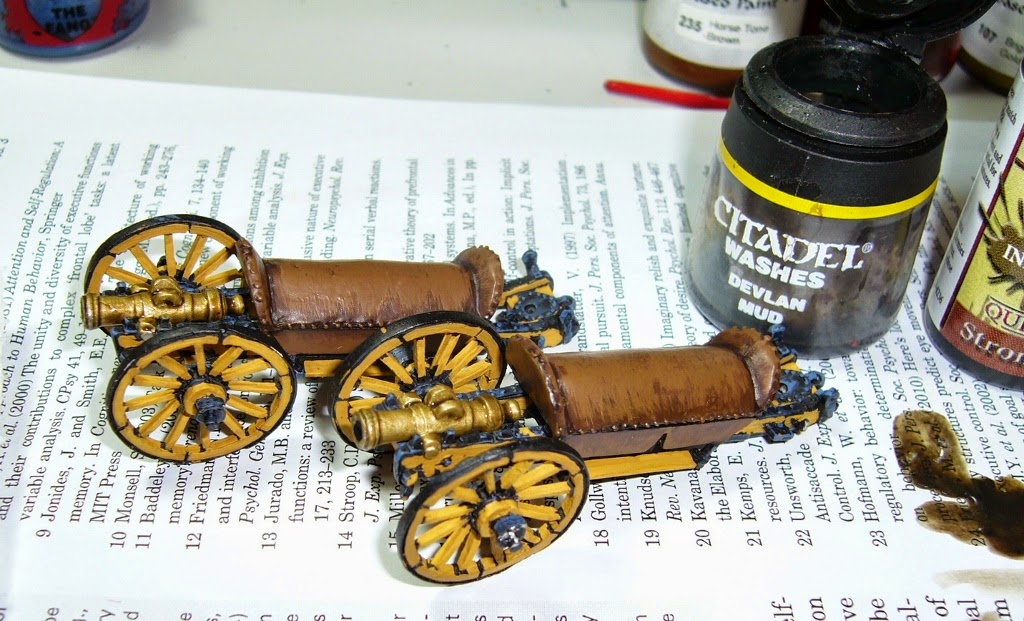 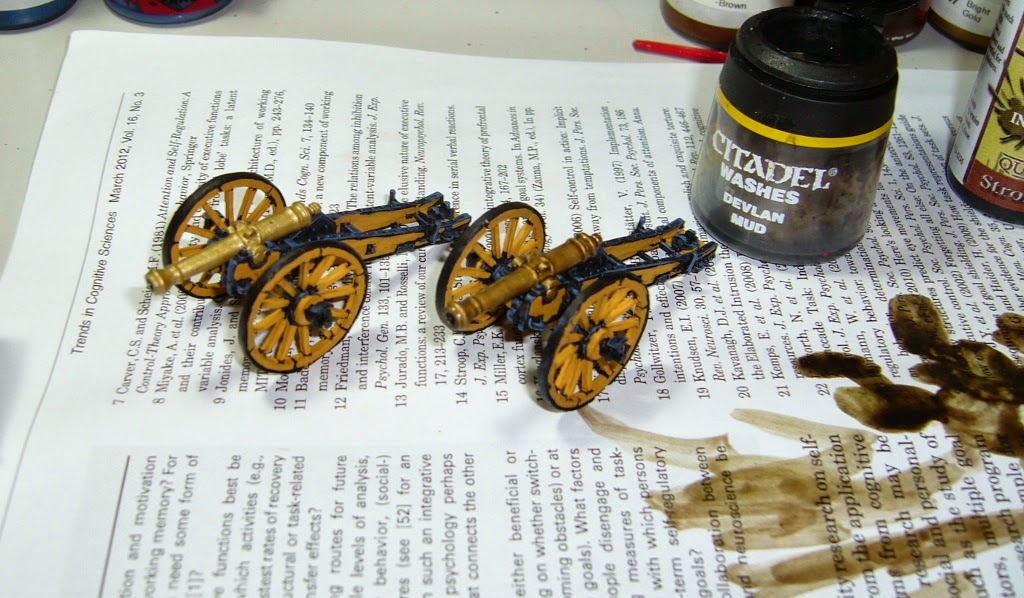 I should mention that the colour of Austrian artillery barrels is a subject of some debate. You'll often see them painted black, as there is some evidence that this was the case at least some of the time. Look at these old TMP threads for more discussion.  I decided to go with bronze here though. Do what works for you! 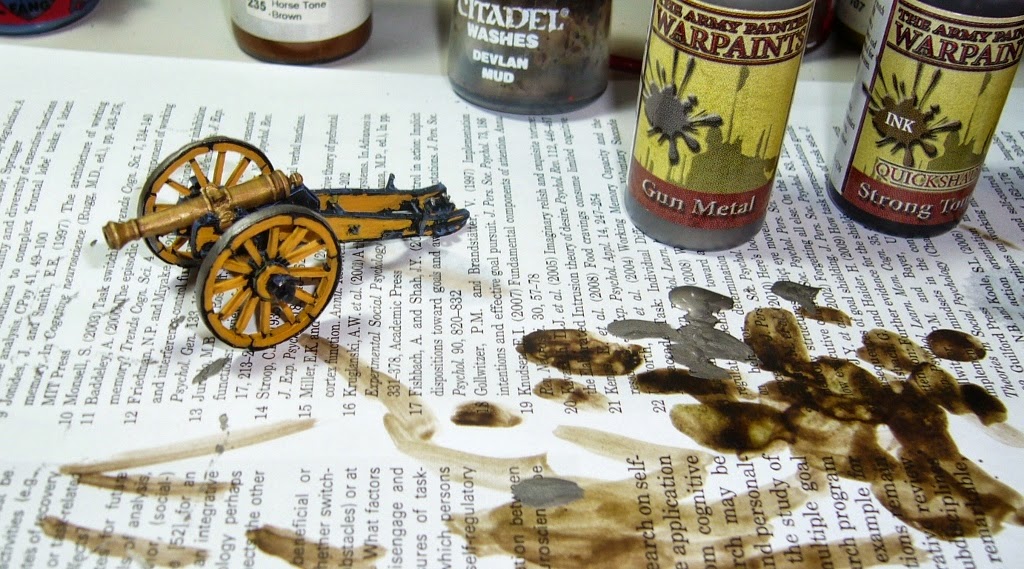 The guns are now completed, except that I go back over and blackline in places as in my previous tutorials. 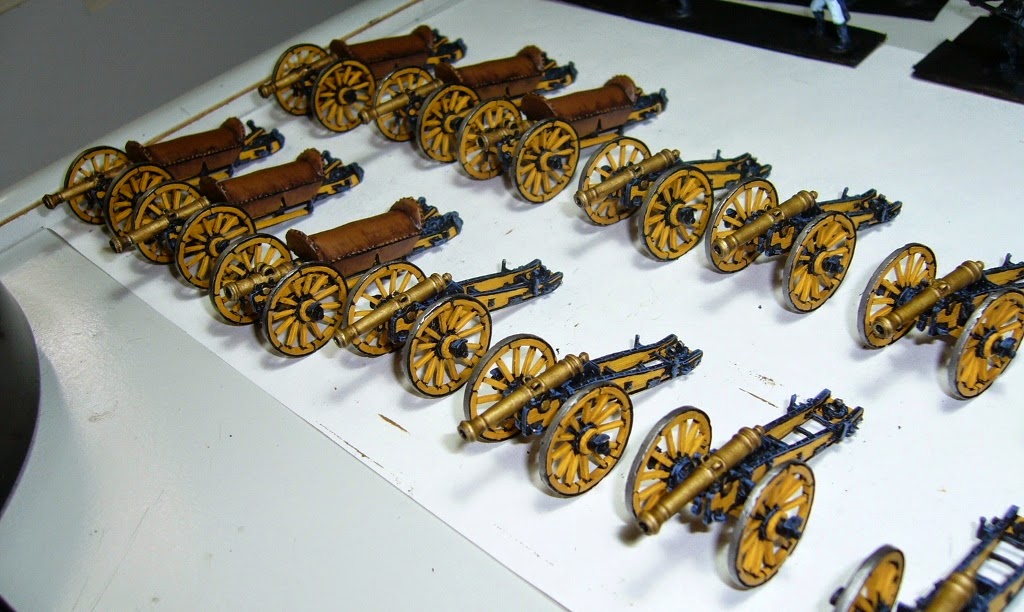 Basing represents something of a challenge with Napoleonic Artillery. Guns and their crews were placed further apart in reality, but to have a reasonable amount of guns they need to be in relatively closer order on a wargaming table for most rule systems. Thus things might look a little crowded but it still looks nice to my eyes. Try and get the gunners in positions that don't look too mad. E.g. as far as I'm aware, the gunner firing the cannon should be on the right side, but you often see him placed on the other side. Also with a gun firing, other crew shouldn't be too close because of recoil, but not so much can be done about that. Another thing I do is to make sure nothing is overhanging the edge of bases, as this makes them more prone to damage as gaming pieces (I do this with all models actually). Anyway, once again, do what works for you!

I place the gun and crew on the base and then play around with crew until I get something I'm happy with. I then remove the gun and glue these crew into place. 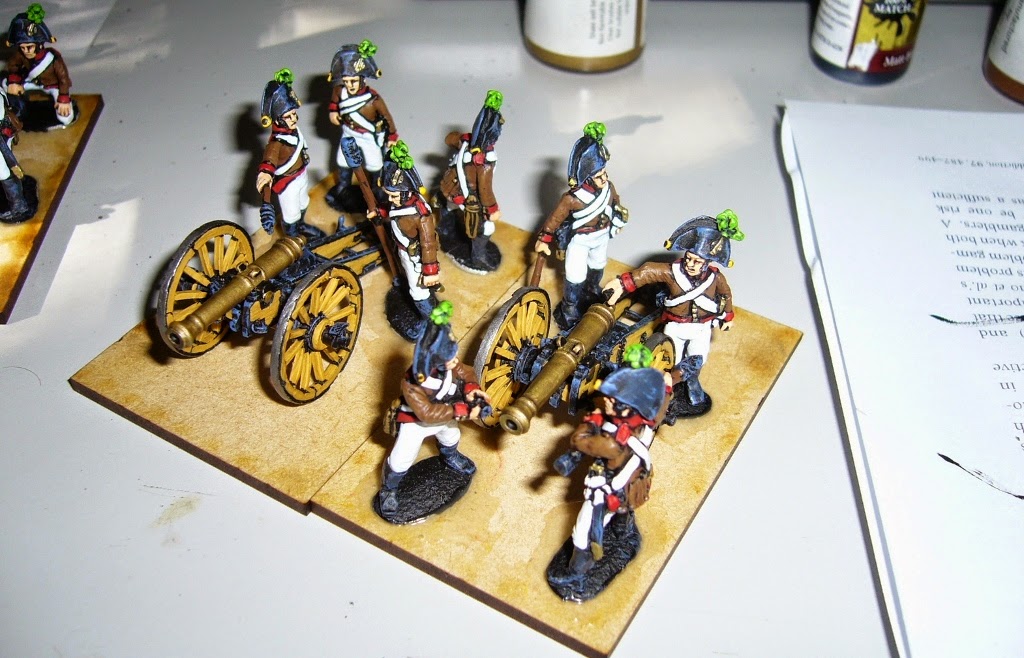 Guns removed from base, crew glued. 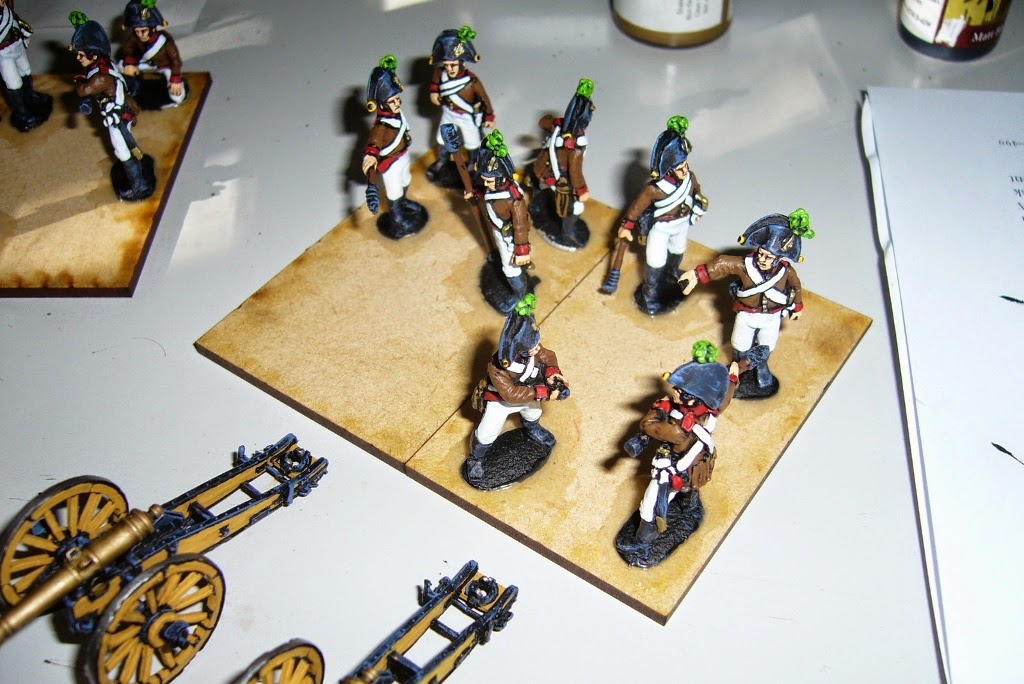 All artillery bases ready with crews glued on. 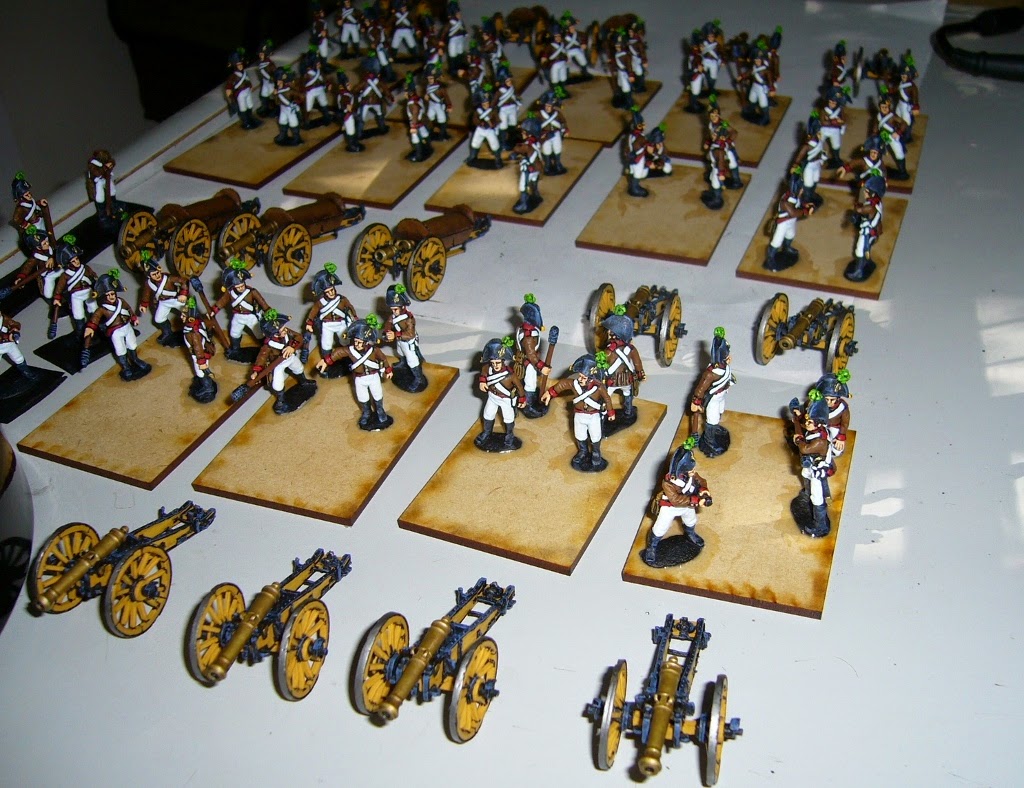 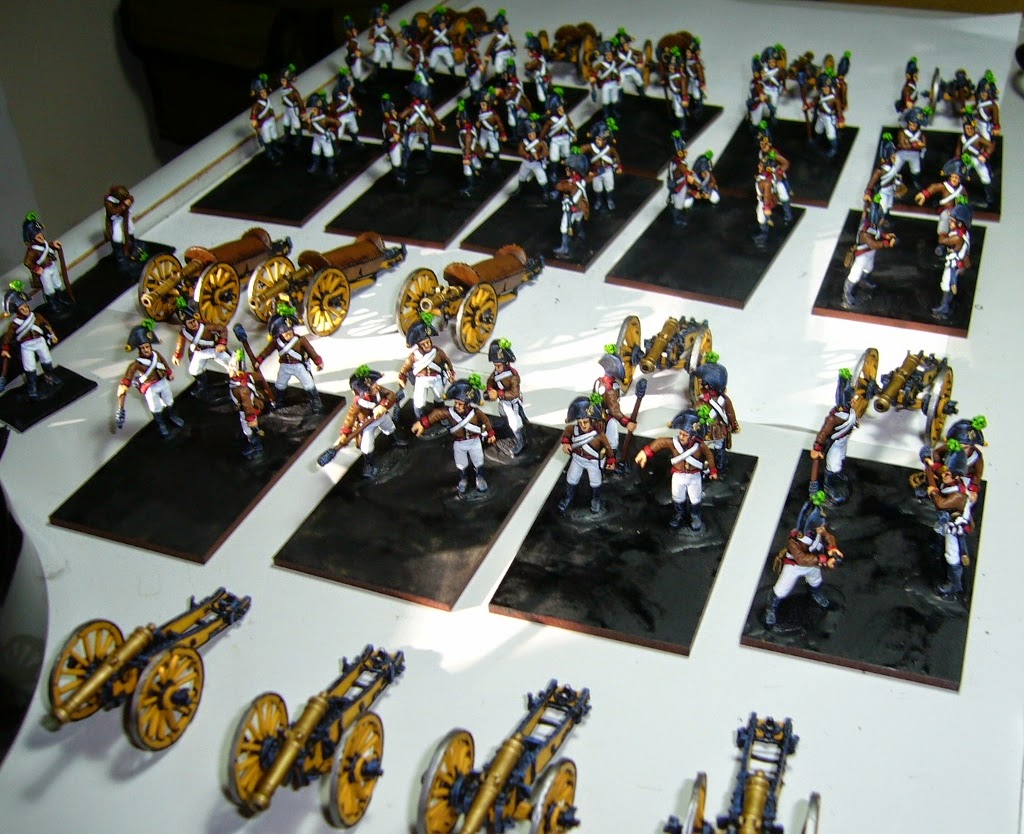 Basing material added. See my basing tutorial for more details of the process. 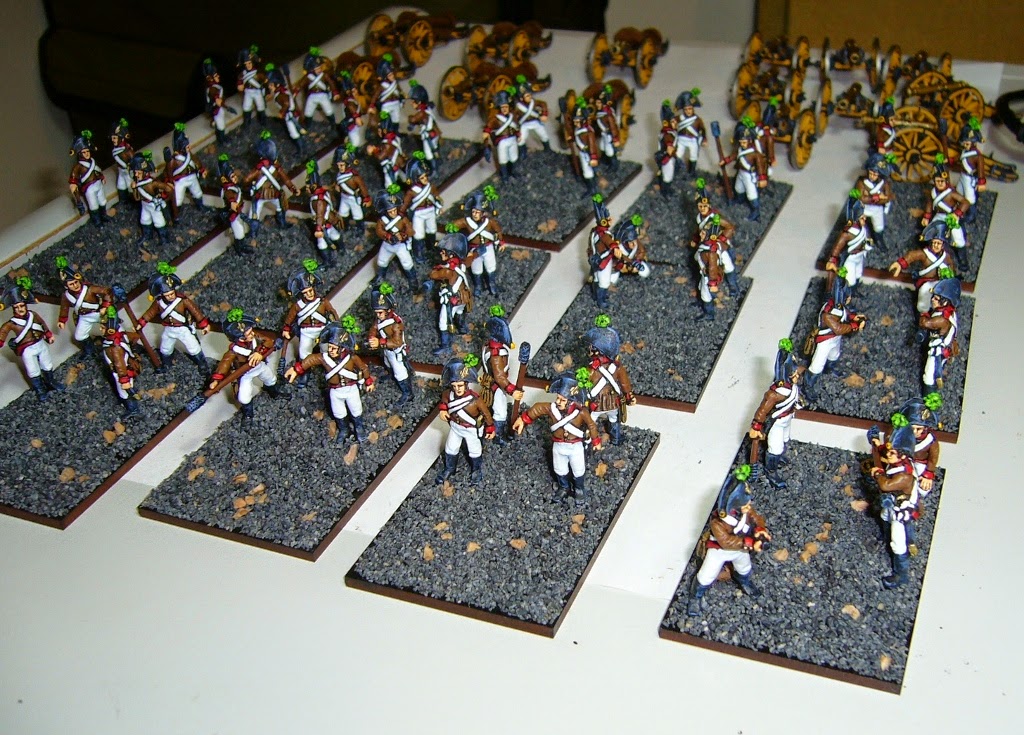 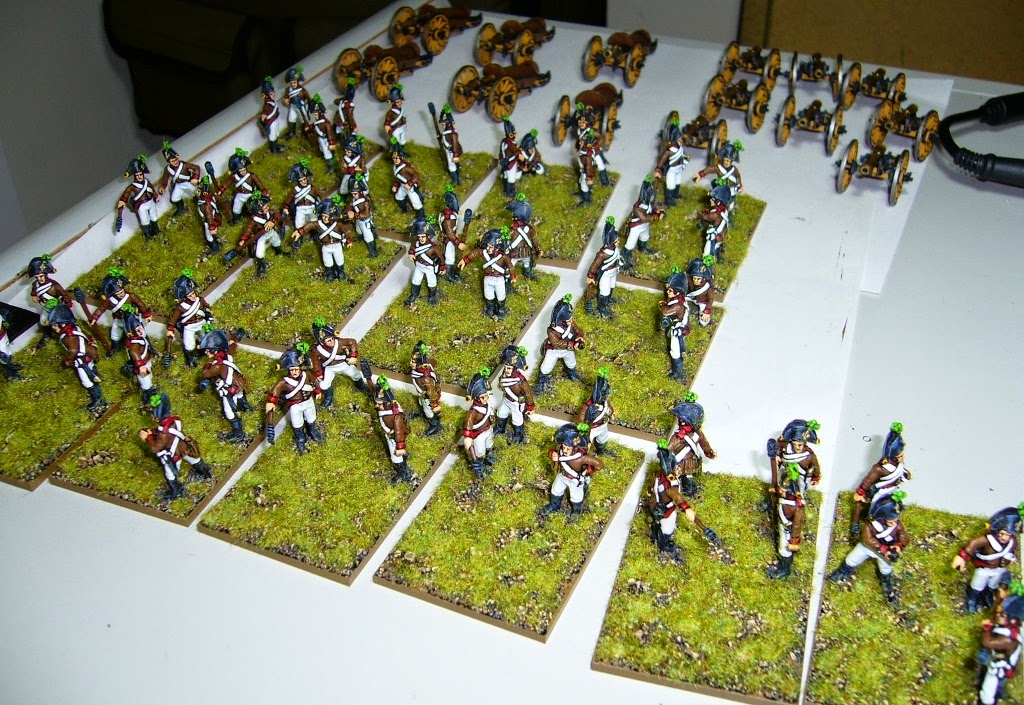 And lastly excess flock is removed, and guns are added! I glue the guns on with slow drying epoxy glue, and leave overnight. Then I will add a few aesthetically pleasing tufts of flowers and tussock.

Thanks for reading, and any questions, comments, criticisms etc are most welcome!

Also at some point I'll add a tutorial on assembling and painting Artillery Limbers (and wagons etc), but that may be some time - as first I have to work out a technique I'm happy with myself!
Posted by Chasseur at 12:37