Paul and I played a test game of Lasalle last night, so here's a quick battlereport and a few notes on the rules. Lasalle is the Divisional level Napoleonic quick play rules by Sam Mustafa. They seem to be generally well regarded so we gave them a go. I've included a few notes on rule mechanisms in italics throughout the report for any not familiar with them.

We didn't deploy the skirmisher figures for units, but the French units all have two (three for the light infantry), and the Austrians one. Red tokens indicate disruption (max of 3 for small unit, 5 for large unit, before breaking), as we didn't have prettier casualty figures available yet.

Game Report
The field of battle consisted of a small farmlet on one end of the table, and some hills on the other end. A couple of forests were also present. We used only a 6x4" table, as our goal was just to get the hang of the rules this time around.

Paul won the toss and decided to have me set up first and have first turn. I'm on the left in the photo below, with most of the strength on my right. Paul then sets up with his elite units ready to contest the farm hamlet, which suited me fine as I was content to let him have this provided I could slow him down a little in the process. 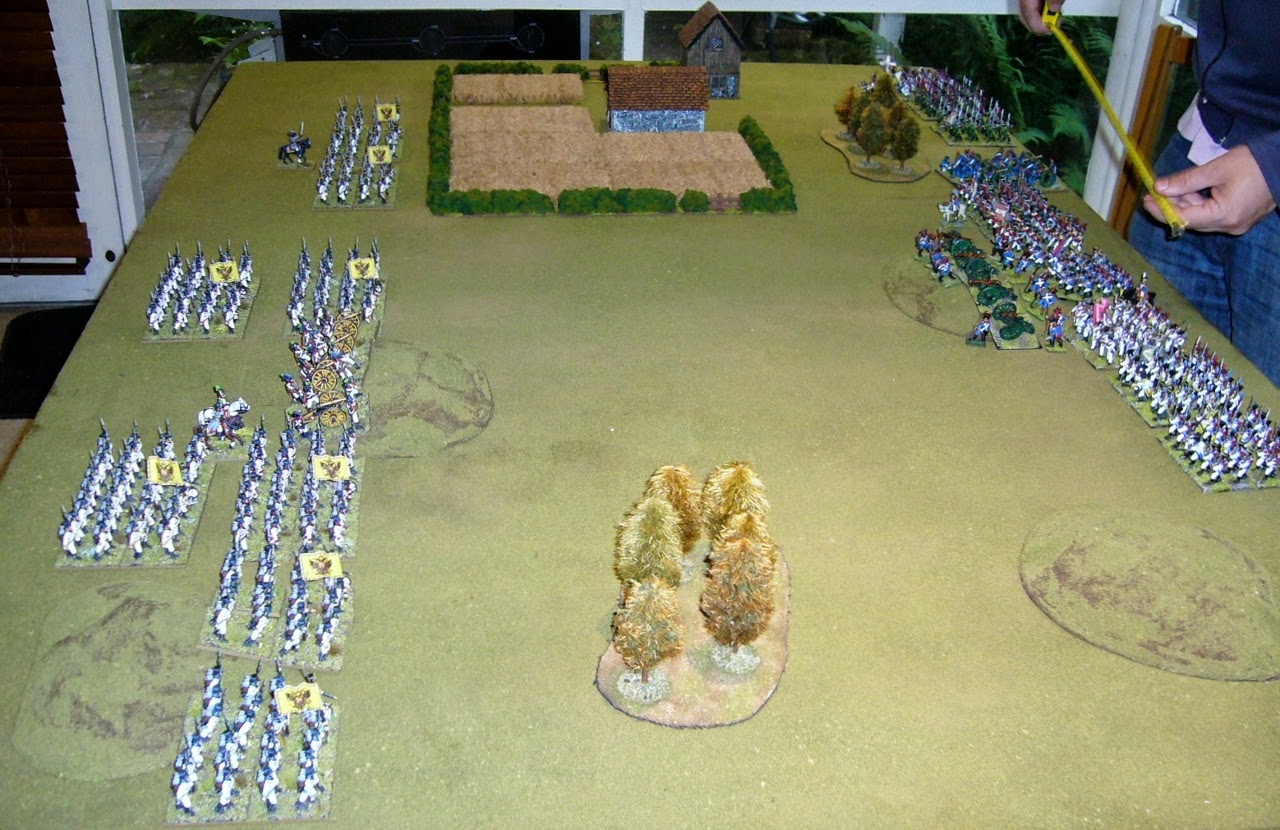 I start the advance. Move distance is 8 inches for infantry in attack columns, 6 inches if in line. 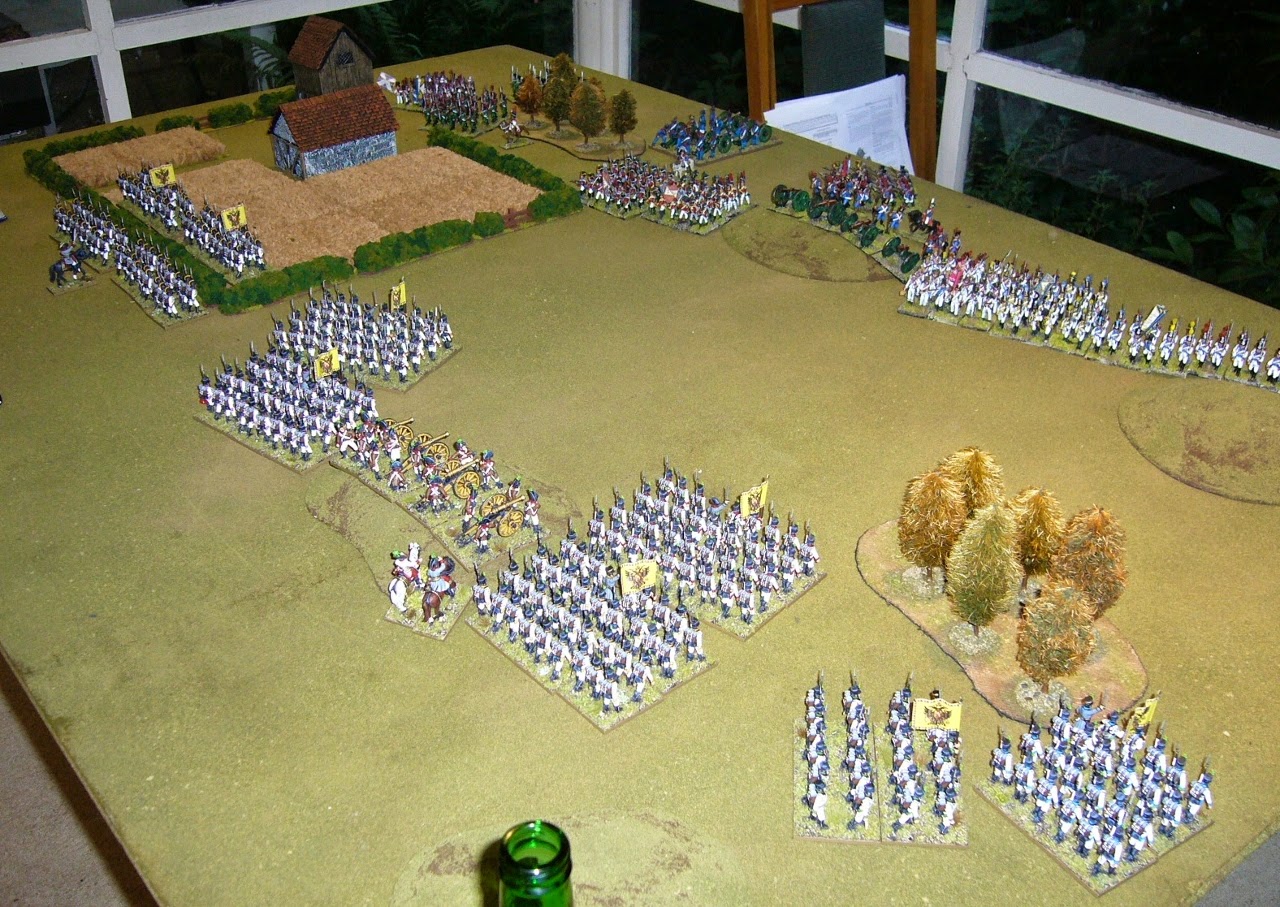 I take some disruption from French artillery as I advance but recover this. My own counter-battery fire gets lucky and silences the French guns for a turn which helps survival of my attack columns. 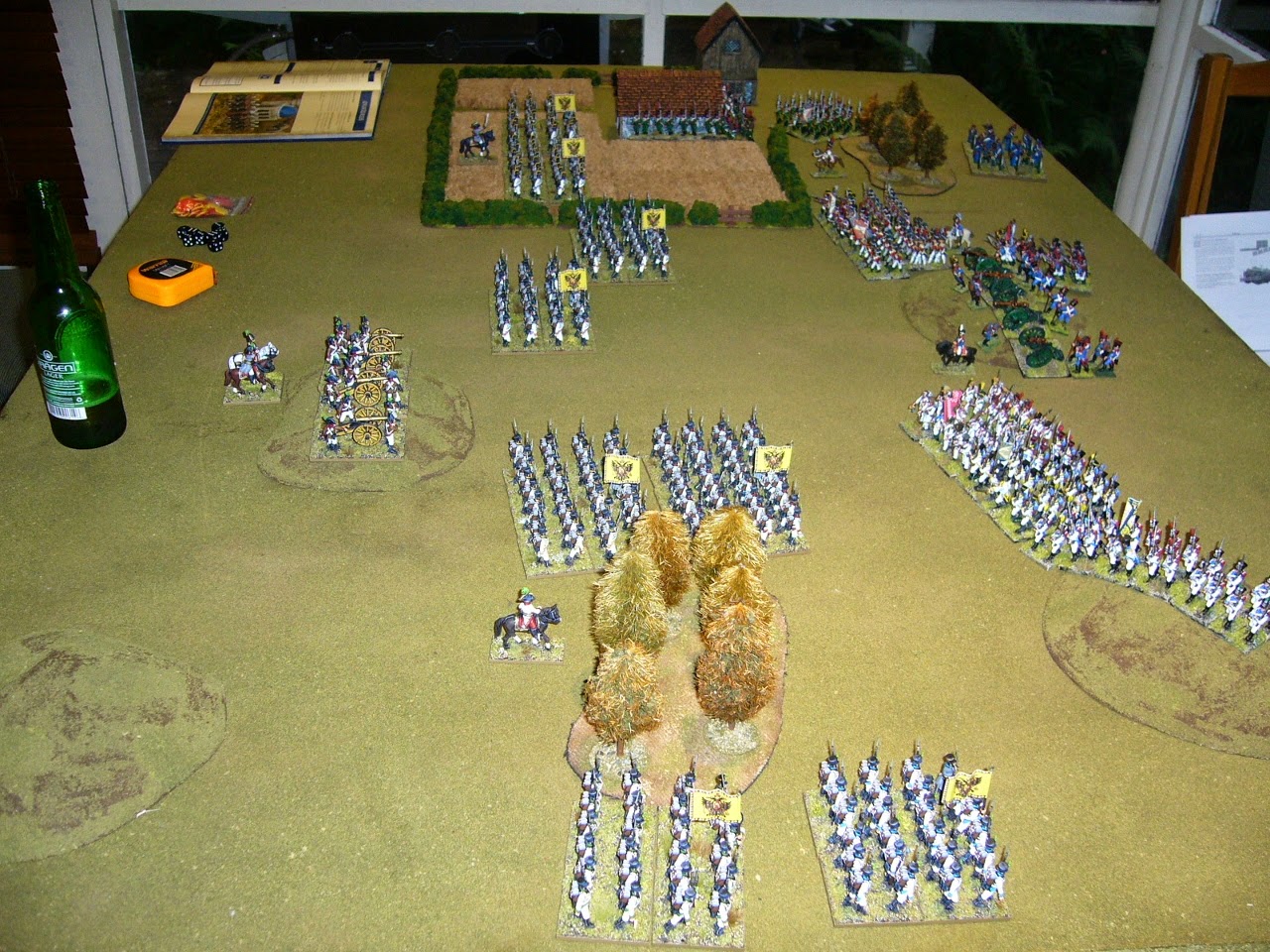 Musketry and cannon fire is all one dice per front rank base (two dice per artillery base if in canister range) needing a 4+ to cause a hit. 2-4 hits cause one disruption, 5-8 hits 2 disruption, and more hits in a firing phase destroys the unit outright.  Range is 8 inches for musketry, 16 for canister, 40 for roundshot.   Roundshot fire in Lasalle will often do "bouncethrough" and affect two units, but at close range canister fire can only affect one unit.

Units can take 3 disruption if small, 5 if large, before breaking and being removed from play. You can remove one disruption per turn if you pass a recovery test, which for our units meant rolling 3+ on a dice. If you are within 8" of enemy you must roll another dice, and if you moved you must roll yet another dice, having to score 3+ on every dice rolled to successfully recover a disruption.

Skirmishes are abstracted, if your unit has more than the enemy (which applied in every case against the Austrians in this game, as the Austrians only have one and French have two), then you add an extra shooting dice. Each skirmisher also reduces canister fire at a unit by one dice too, so for example the French artillery was rolling 7 dice to hit my units rather than 8. 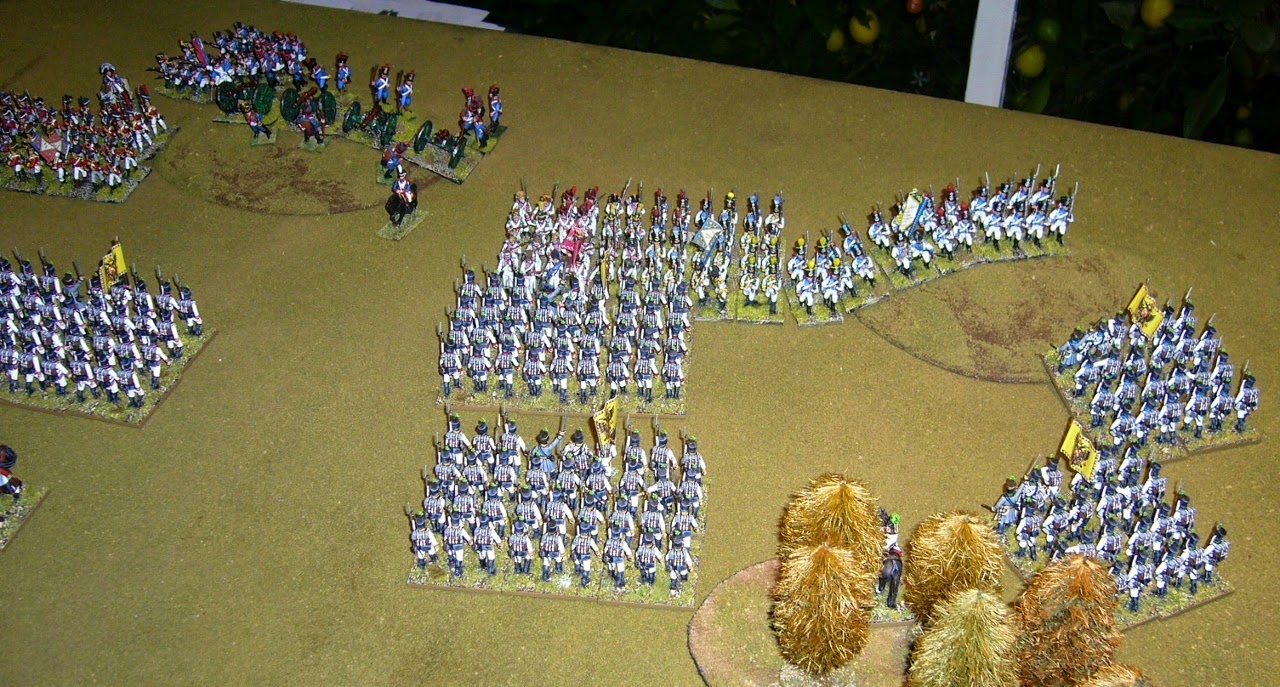 In combats, each unit rolls two dice per base it has, needing 5+ to hit. A unit subtracts one dice for each disrupt hit it has taken, and other modifications can apply (some examples would be: infantry not in square vs cavalry halve their dice; cavalry vs infantry in square halve their dice; if fighting two units you halve your dice).  If you score more hits then you force the enemy to withdraw and inflict a disruption on them (and defenders win draws). If you are the attacker and get double the hits of the enemy you wipe them out!

I also try to assault the farmlet area on my left flank. Croat Light Infantry have entered the first building (which counts as a town area), but have not had the necessary turn to deploy to defend it. I hope to catch them before they deploy, but I'm repulsed here also.

Next turn I keep throwing in the attacks and suddenly break through on the right flank. The three French units over here break over a couple of turns.

My centre has fallen back as it is hit by canister and musketry and because it is also under risk of being flanked on my left. However my right flank is now storming towards the French centre, and Paul struggles to redeploy. 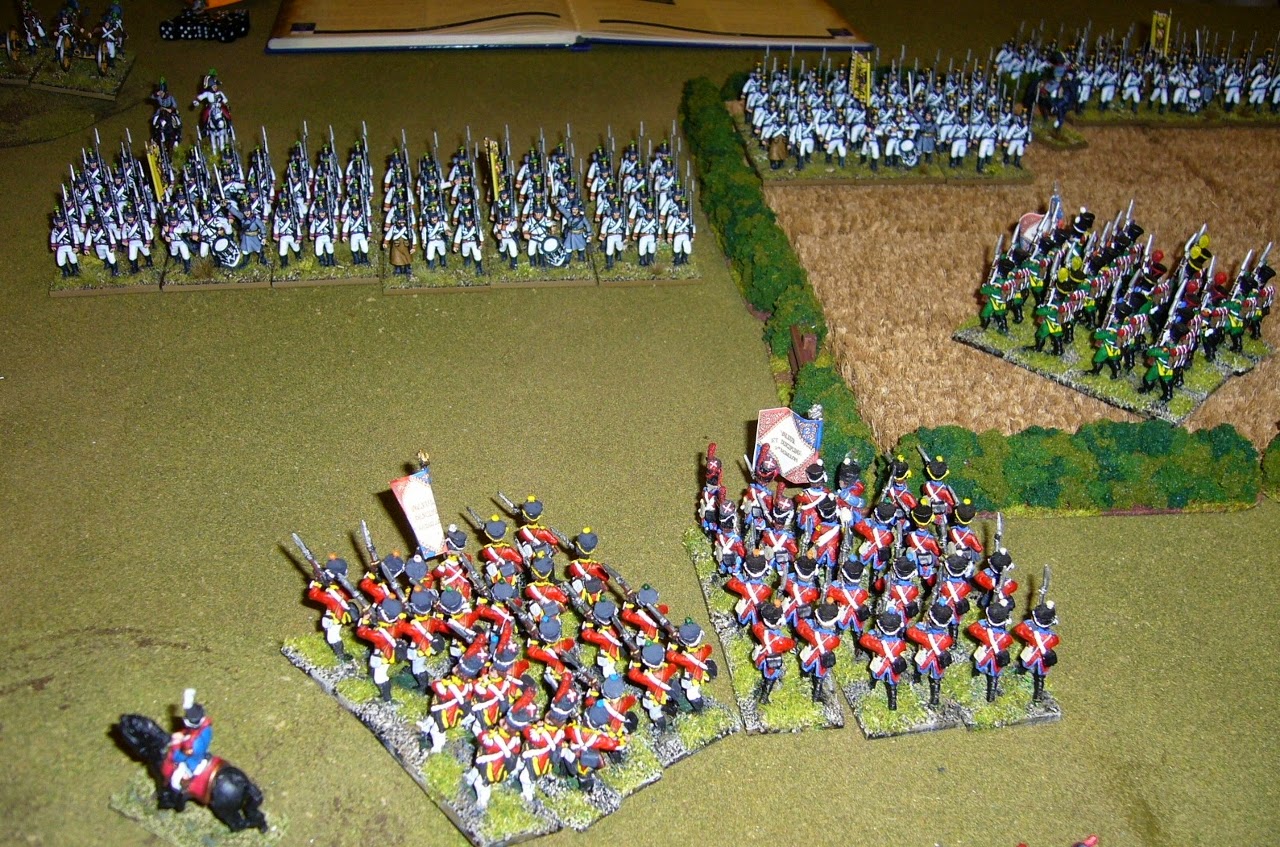 It gets worse for the French as my Cuirassier Brigade arrives at last. 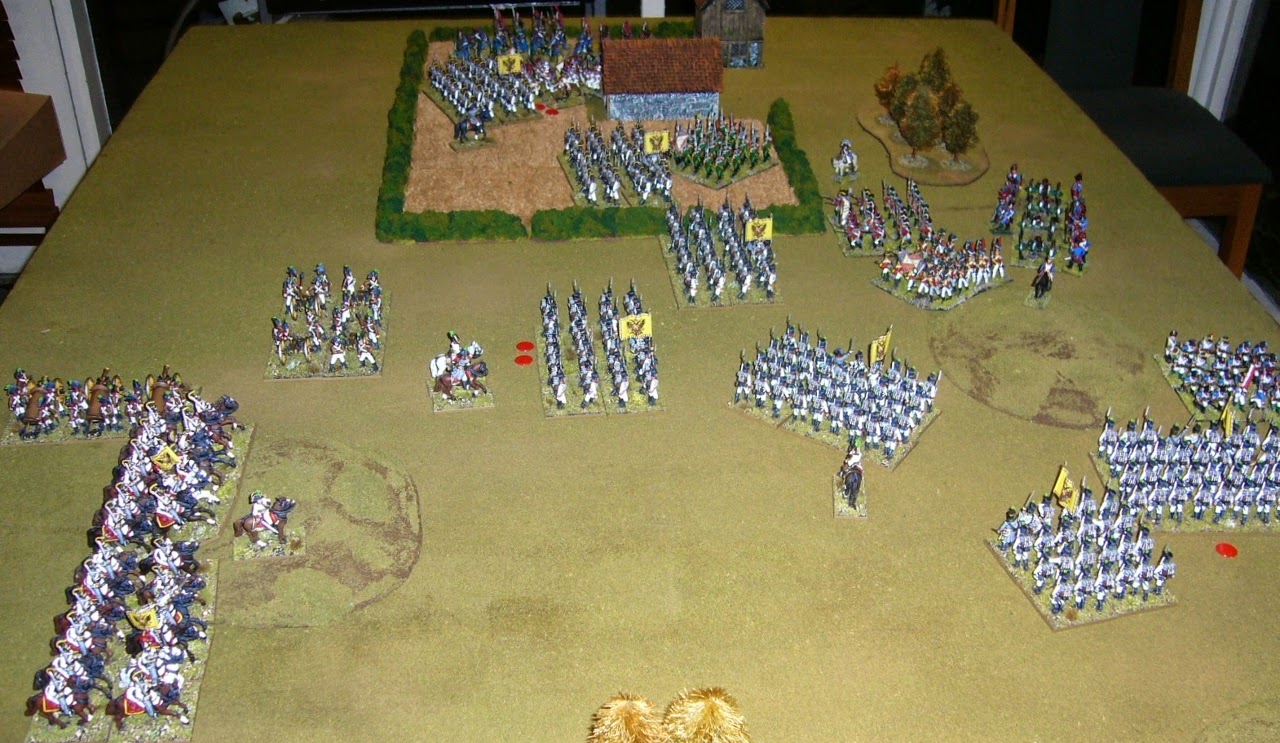 Westphalian elite infantry and one of my large infantry units have been battling over on the left and eventually I prevail due to weight of numbers, though not without some fierce fighting. Paul's reinforcements moving to flank me arrive too late to save him. His heavy artillery finally deploys but also too late to affect the game. 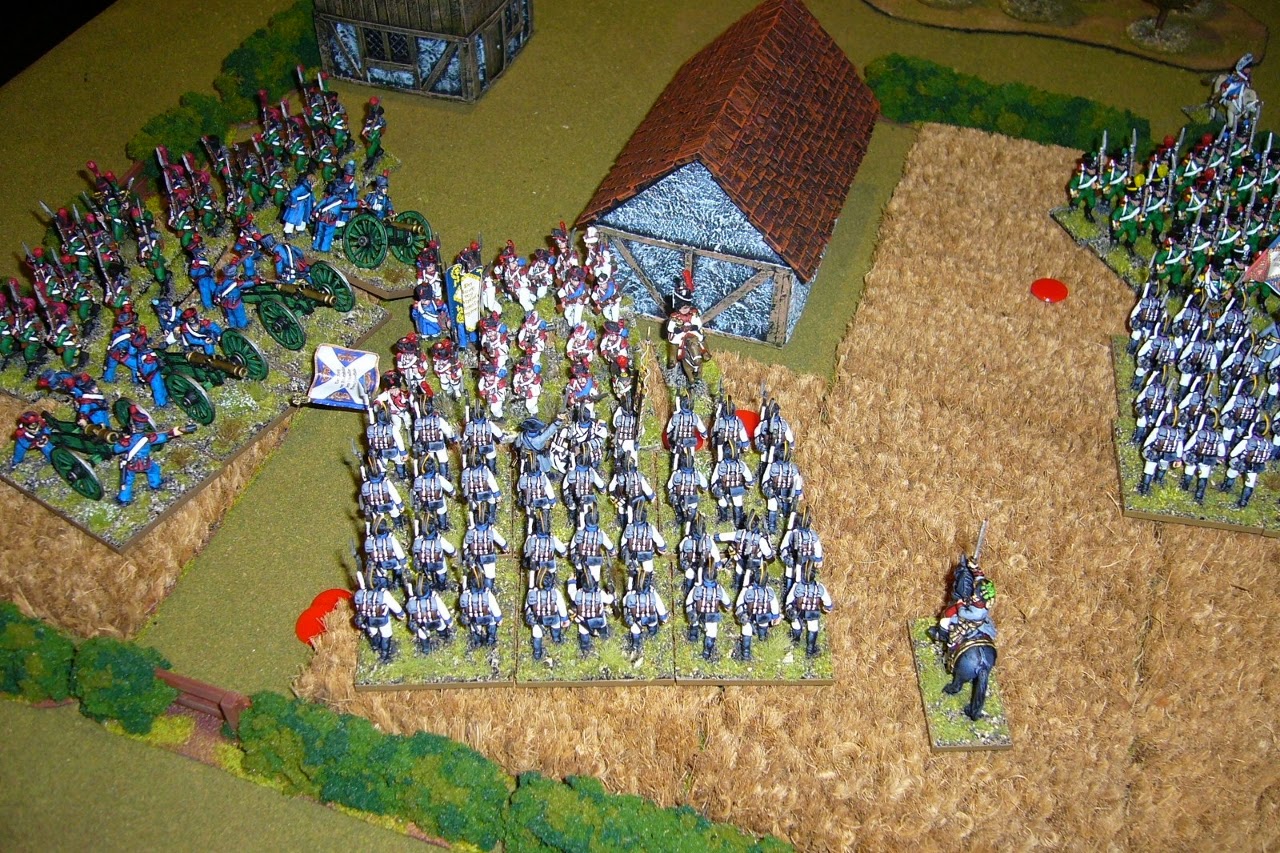 I break through in the centre, and we call the game over, as it would be shortly. Turn 12 of 16 (each players turn counts as a turn, so a game is 8 player turns each). 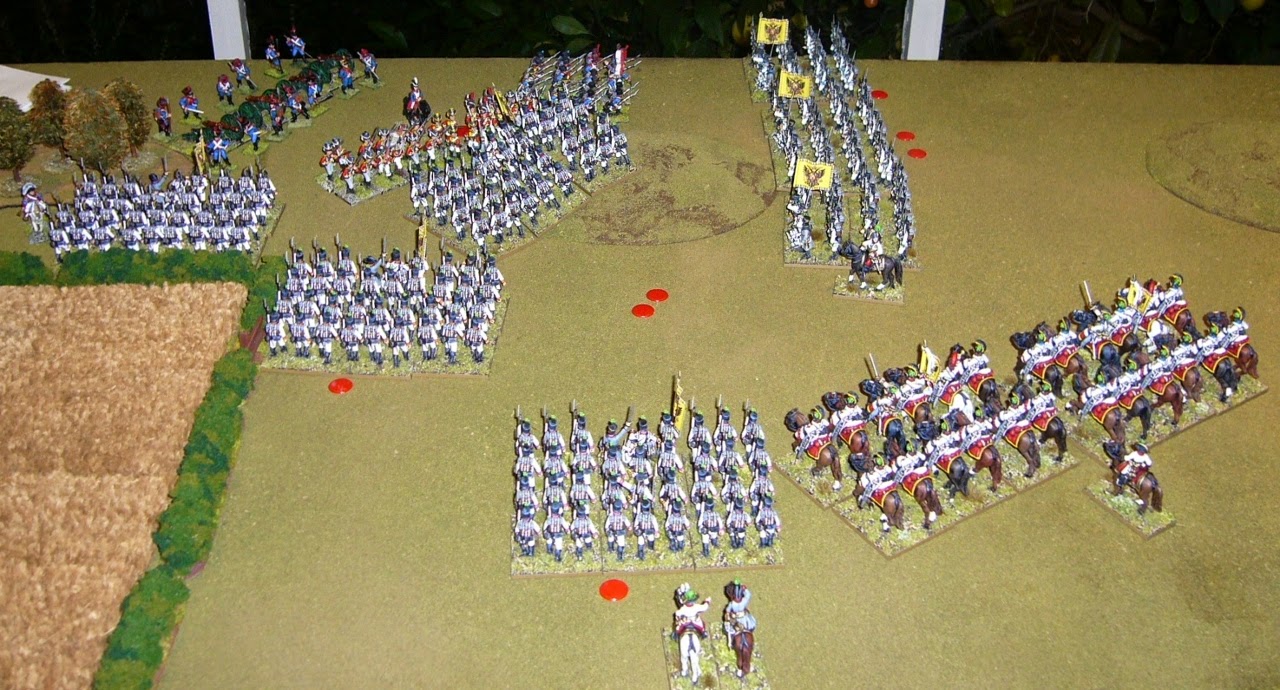 Conclusion
A rather strange Napoleonic game as it was concluded entirely without cavalry intervening(!), my own arriving too late to have any effect on the battle, and Paul not having any to start with! We were basically just charging with attack columns most of the game, which was rather deadly. A couple of exceptions to this occurred where the defensive French deployed in line. Paul's best infantry was caught up in the farmlet, and his heavy artillery battery never saw action until very late in the game which didn't help his cause. The Austrian large units are a very tough nut to crack. Not much of a reserve (in terms of second lines) was used by Paul or myself either, though I think it would have been useful in places.

We did wonder if attack columns were somewhat overpowered compared to lines, but having checked the factors it seems about right. An attack column will take two rounds of shooting (and deliver one more ineffectual one itself) in charging a line. Each lot of shooting from the line will do a disruption hit on average, which means the combat will be 8 dice for the line and 6 dice for the column (The column having lost one dice for each disruption hit from its original 8).  As described above dice cause hits on 5's, and you need more hits than the enemy to force them back (defender wins draws), or twice as many hits as the enemy to destroy them if you are the attacker. Various bonuses apply, e.g. a higher morale grade gives +2 dice, being higher on a hill gives +2 dice, and Guard units add a further 2 dice. So to take the classic example, an attack column attacking a line on a hill, the column will be in lots of trouble (especially if the defending line unit is veteran or guard) - likely to be forced back and then finished off with one more volley or charge.  Two attack columns against one line unit have a much better chance though, as does a large unit against a small unit.

The Lasalle rules were very easy to learn (both of us being novices) and I can well see that games would take about 2-3 hours with ease. We had memorised most of the important information by about midway through the game. The rules seem to be very clean and streamlined as others have mentioned. I'm sure we made a few mistakes but nothing too major, and I'm now having another read through the rules to check what we missed.
Posted by Chasseur at 15:09