Added a couple more guns to my French Guard Artillery, another 12 pounder and a howitzer. This brings them up to a full battery of three 12 pounders plus a howitzer for our General de Brigade Waterloo game in two weeks time. Bit tricky fitting everything on the base with 12 pounders but managed it somehow. These are all Perry figures. I note the crew for the Howitzer are different figures from the other crews, though I mixed the figures up a little.

On the two guns that were already painted I also fixed up the front tassles on the bear skins (repainted from white to red!), and added the rank stripes to the arms of figures where I'd missed this first time around. 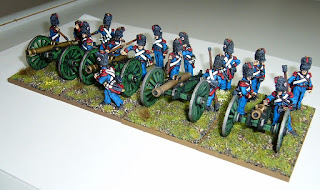 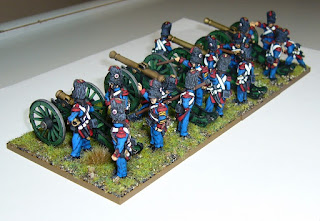 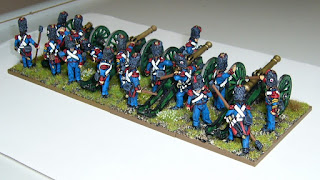 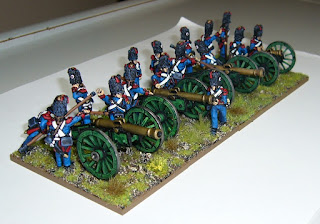 Looking at the photos I noticed there's also a bit of frosting on the right two guns, especially noticeable on the 3rd 12 pounder barrel from the left. This comes from spraying matt varnish when it is a bit too cold and humid! Will fix it up when I get a moment. Winter is coming on here in New Zealand which will mean less days for spraying figures over the next three months, and more focus on assembling.
Posted by Chasseur at 19:21